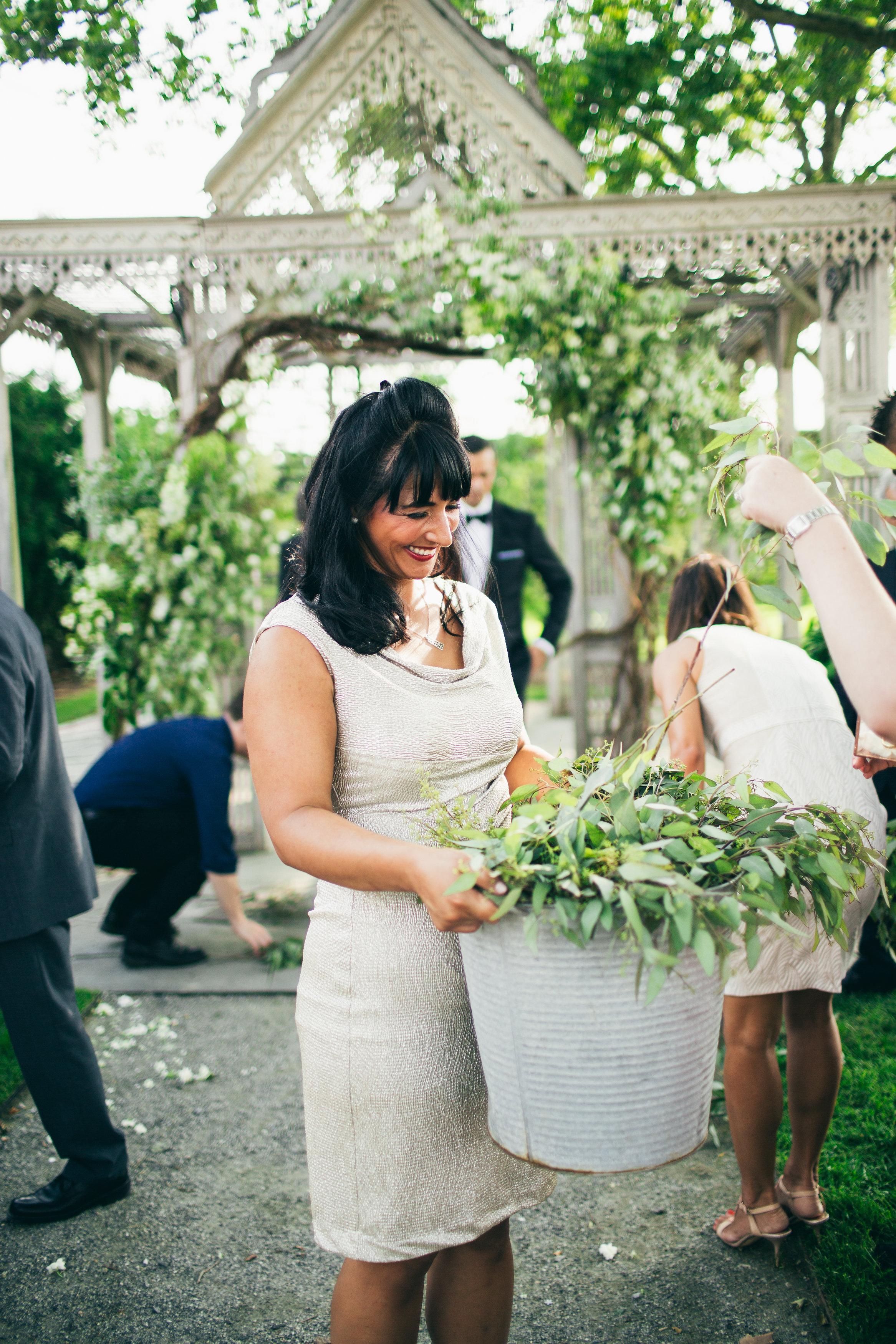 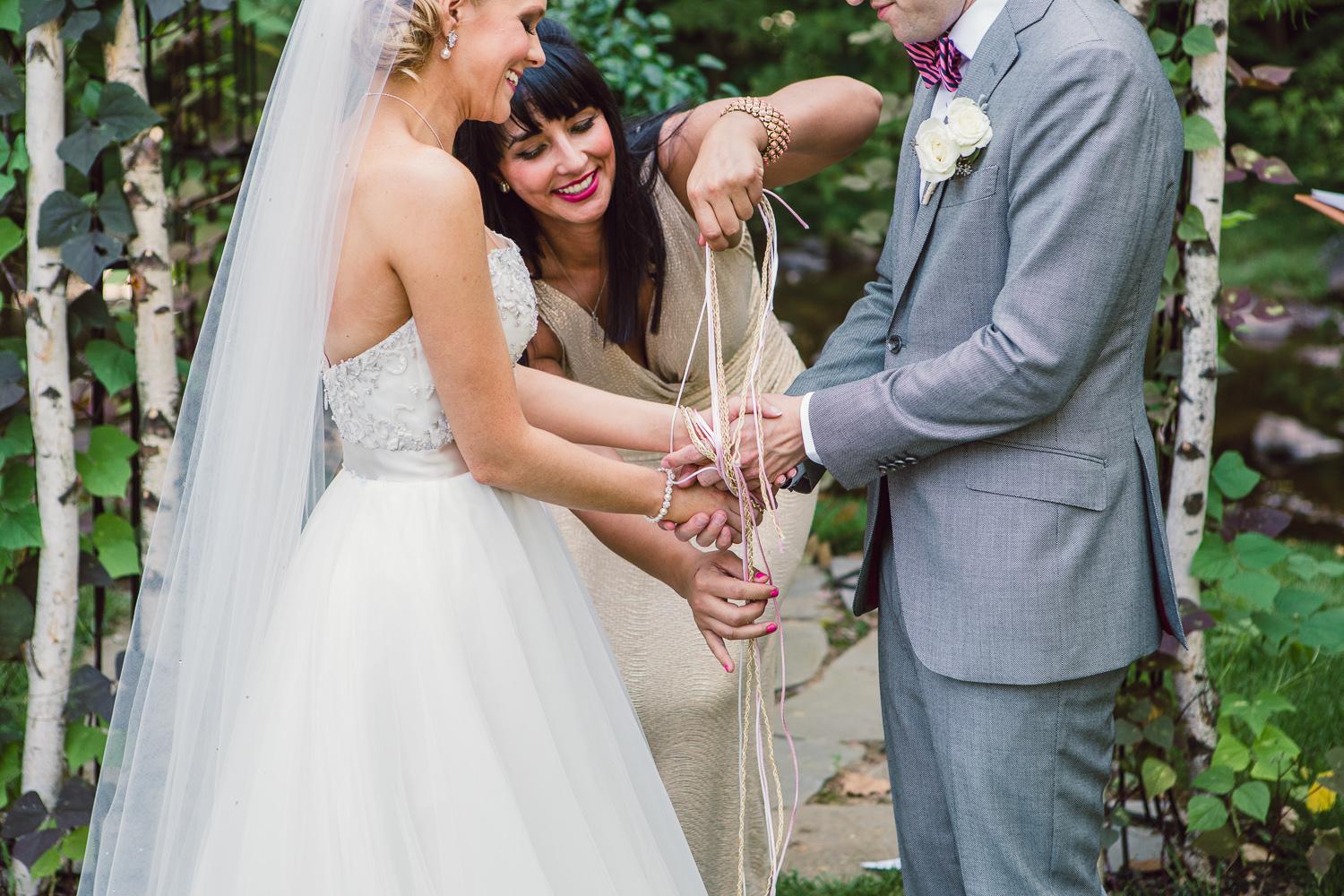 Alisa Tongg writes and performs marriage ceremonies for couples who want their love story to be the centerpiece of their wedding celebration.

One of the most beautiful and accessible unity rituals, hand-fasting, is making a big comeback. Some say that the Celtic tradition of ceremonially binding a new couple’s hands together as a symbol of their public commitment to each other, is the most ancient wedding ritual. When I introduce it in wedding ceremonies, I point out that long ago, when only the rich could afford to exchange rings, hand-fasting is what ordinary people would do to express their consent.

Historically, hand-fastings were used as people entered into relationships of all different lengths— “a year and day”, “a lifetime”, “for as long as love should last”, or ”for all of eternity.”  Most of my couples have the intention for their bond to be one that lasts forever, or at least a lifetime, so I choose language to support more permanent hopes for the future. 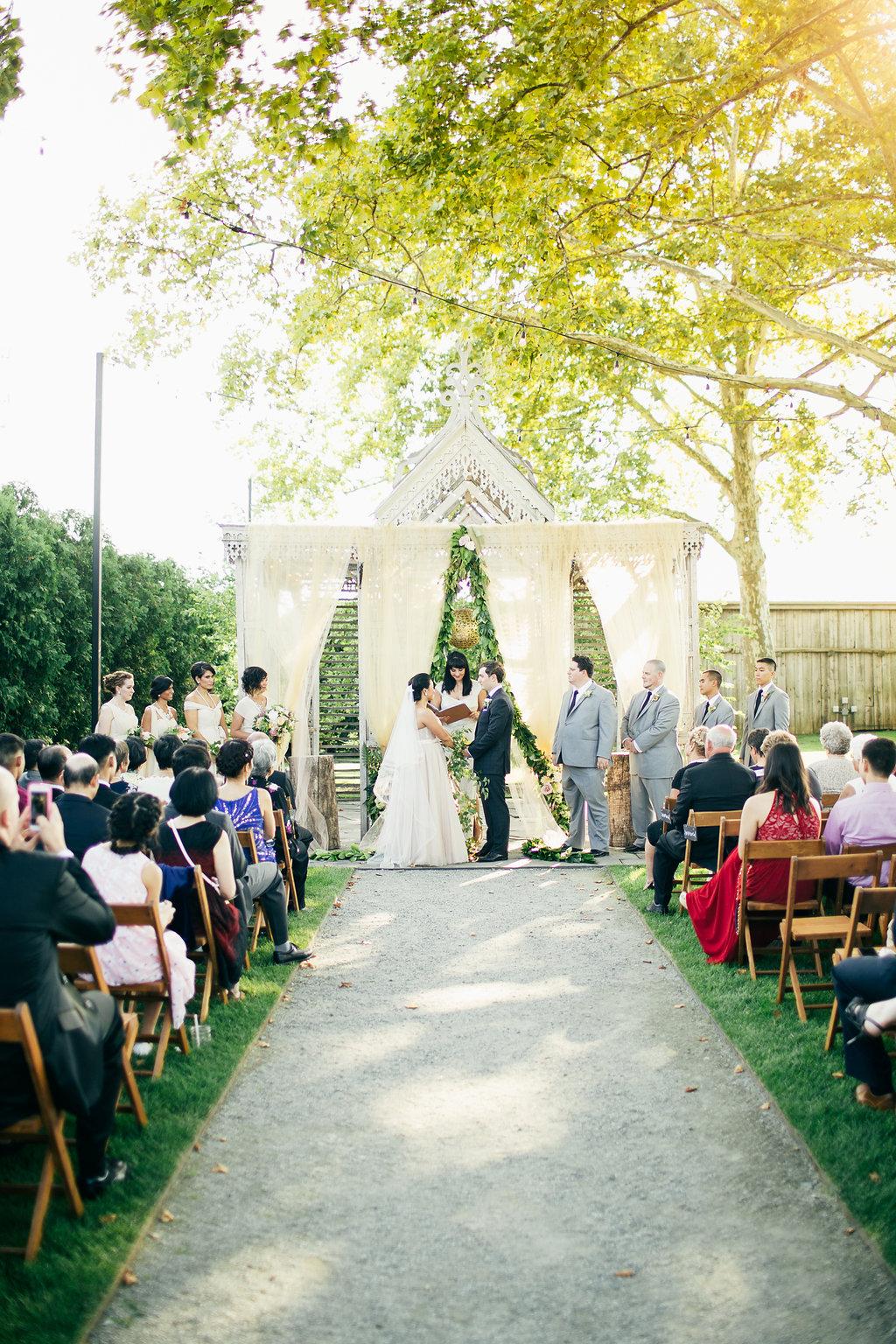 Because it’s traditionally a ritual to support the declared intent of the couple entering into the marriage, usually (but not all the time) I place the hand-fasting in the ceremony right before the “I dos.”  The “I do’s” in today’s modern ceremony is the part where the couple consents to the marital relationship understood by local civil laws. The couple would remain fasted together through this section and often up until they exchange rings.

Hand-fasting is quickly becoming the most requested element in the ceremonies I create with my couples. People are drawn to it, because it can and has been adapted by many cultures and faiths. The universal nature of this ritual, and easy to understand symbolism, many couples delight in expressing their own individuality and style through hand-fasting. 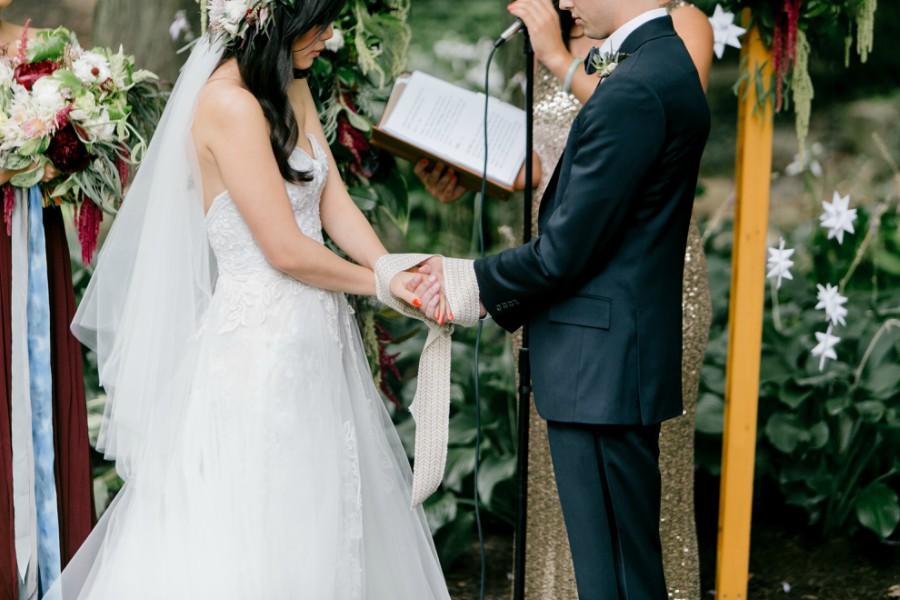 How it works: The couple faces each other and holds hands so that their arms form a figure eight…“for all eternity”

Something of significance is wrapped around their clasped hands and tied into a knot.

Here are just a few other examples of how some of my couples have chosen to incorporate a hand-fasting ritual within their own wedding days.

Catholic-Inspired: Bianca and Matt used an heirloom double rosary for their hand-fasting ritual.

Friendship: Close friendships were the most important to Lauren and Mark when they tied the knot late summer. They invited each person in their wedding party to contribute to and build their hand-fasting garland during the ceremony. Groomsmen and Bridesmaids took turns each placing one of these gold, pink or delicate white cords over the couple’s joined hands before I brought them all together in a knot.

Family-Themed: At Carly and Branden’s Cescaphe Vie wedding, the importance of family was the theme. They invited four family members, all of whom had attributes they admired and wanted in their new life together, to each participate in their hand-fasting. As each honored family member placed their braided hand-fasting ribbon cord over Branden and Carly’s clasped hands, they said aloud the gift or skill that they wanted to bless the couple with.

Symbolic Greens: Ying-Lee and Chad are bond together with ivy and beautiful gold ribbons. Ivy, the symbol of fidelity was just the perfect touch for this kismet couple.

Lei: Nikki and Sue were married on the North Shore of Maui, and in Hawaii the hand-fasting is done with a maile lei. Here’s an example of a time where the hand-fasting was placed later in the ceremony.  A bonus to placing a hand-fasting after the ring exchange (and toward the end of a ceremony) is that the regal green living garland (or lei) can be a part of the first kiss and recessional. 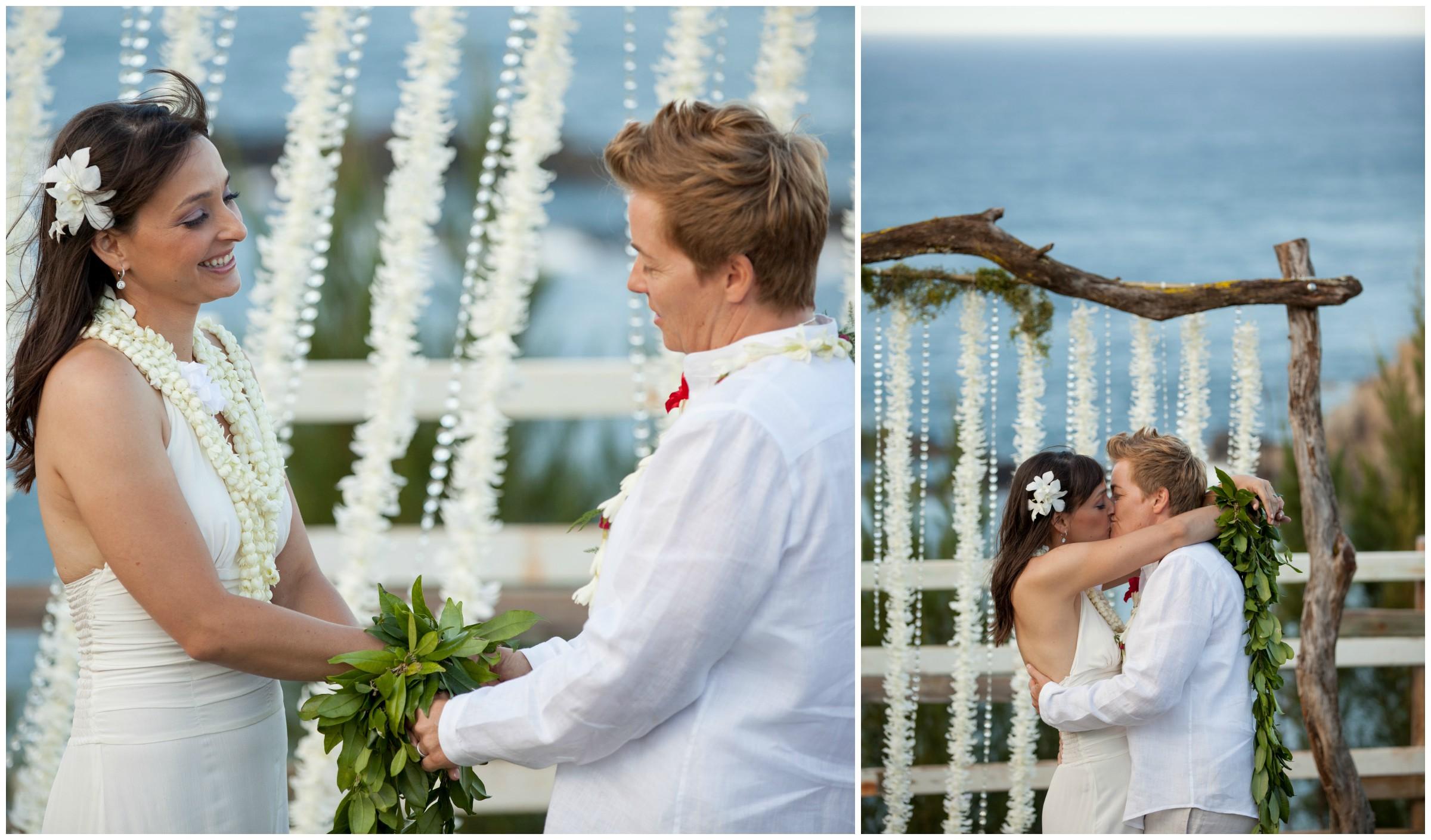 Science DNA: Since she was in college, Melissa has always thought that, “a strong balanced relationship would feel like a DNA strand, where the two edges are connected, and though it is moving, growing, and changing, it is always bound together to support its whole.” She imagined the two people as the edges and that love is what holds them together. Inspired by the double helix, Melissa and Steven had their hands fasted together with four cords, each signifying one of the four core building blocks of their love and relationship.

Elegant: Tim and Amanda’s beautiful and elegant hand-fasting garland was made as gift from the bride’s sister, Caitlin. I was so impressed with this garland, I asked Caitlin if she would consider making hand-fasting garlands for other couples too. She’s since created an online shop on Etsy etsy.com/shop/TieThatKnot 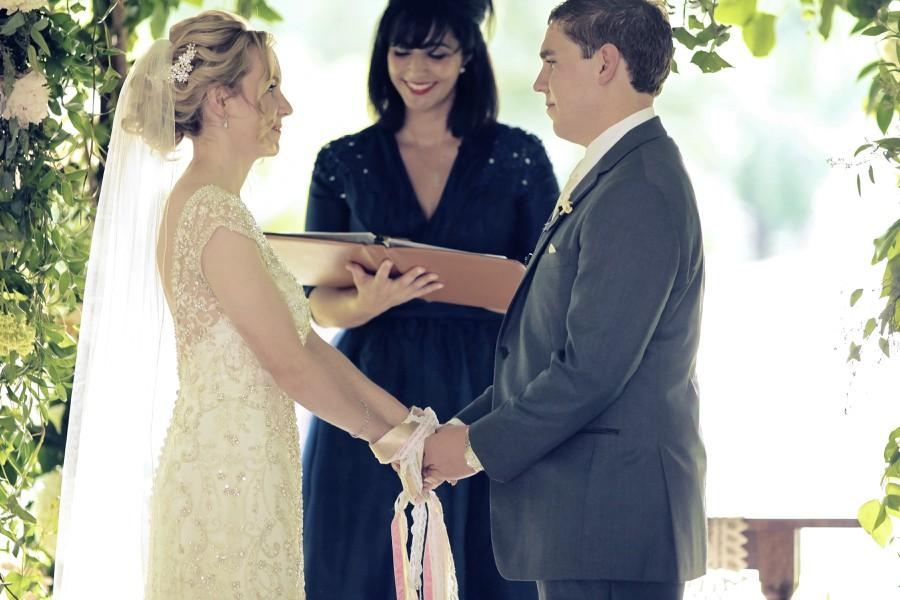 Oktboerfest-themed: Linda and Jeremy used a garland of greens and wheat at their vintage Oktoberfest-themed wedding. The wheat added an extra layer of symbolism–hearth, home and prosperity–all of which the couple desired in their married life. 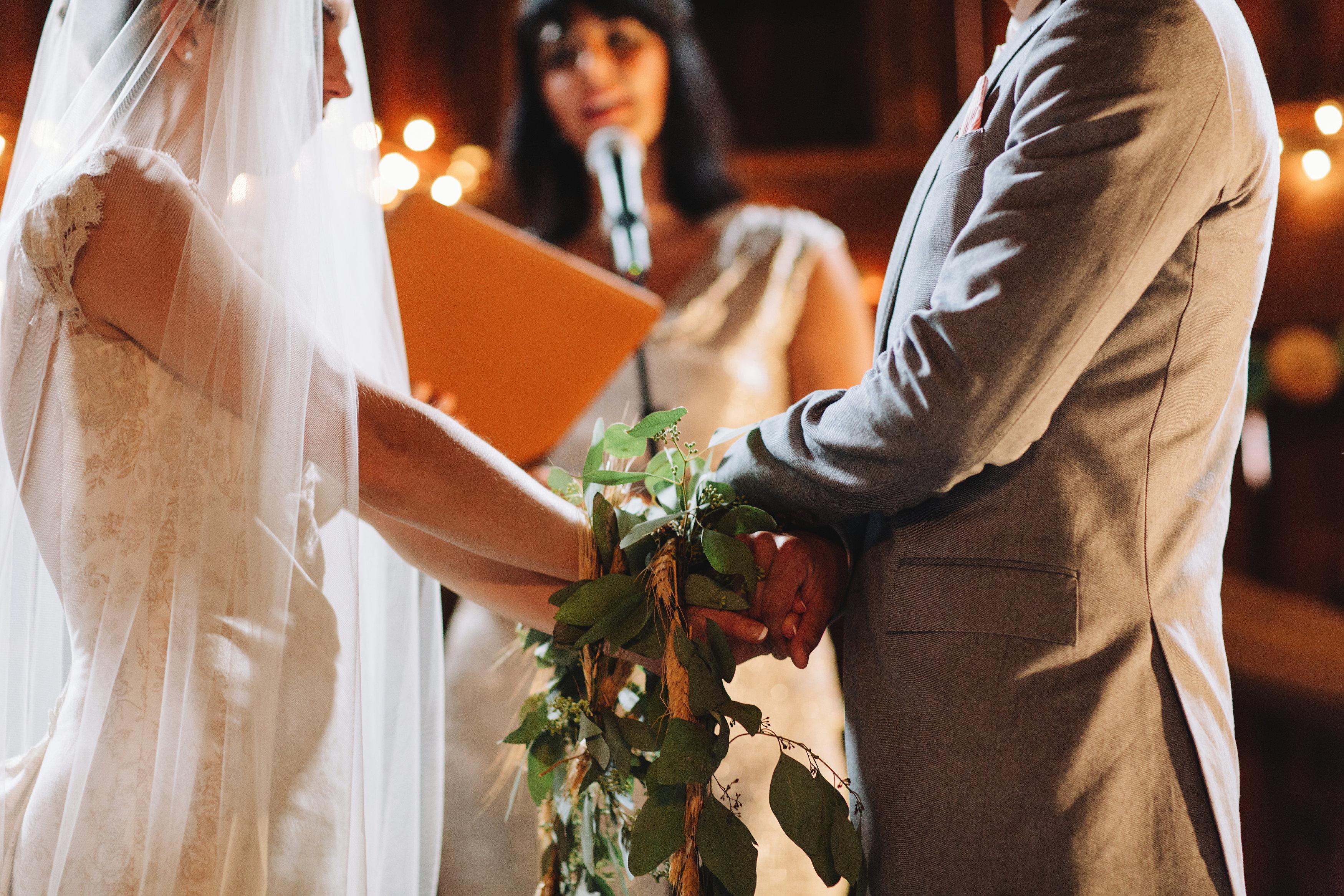 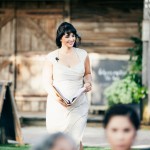