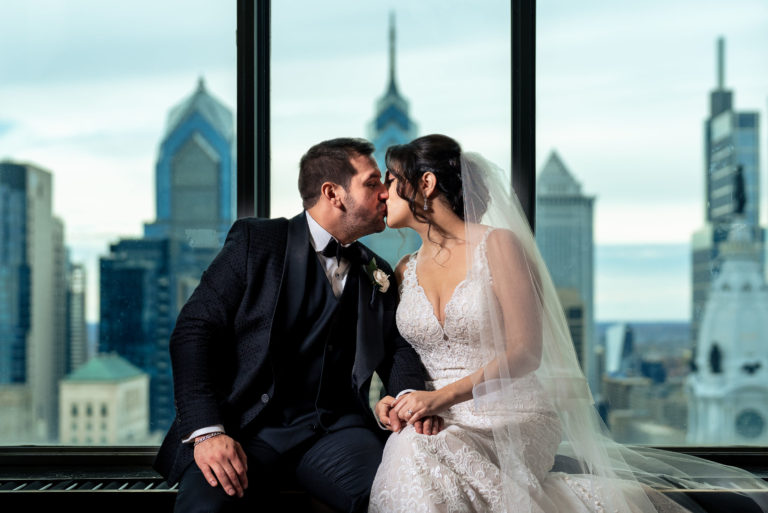 J&J Studios brings us this super touching wedding with traditional Jewish elements at Ballroom at the Ben. Our personal favorites… the incredibly emotional letter exchange during prep and the shot of the cake topper! Enjoy!

Lauren and Jake met on a dating app called JSwipe six years ago. At the time, Lauren was living and working in New Jersey. Work kept Lauren constantly occupied, and she was also looking forward to her sister’s wedding the next month. Jake had relocated to the Philadelphia suburbs from his service in the Israeli army. He anticipated beginning his career in real estate.

After a few days of chatting, Jake asked Lauren to meet in person for their first date. Lauren was thrilled! But, because she was so busy, Lauren told Jake that he would have to wait to meet until Tuesday, September 27, at seven o’clock. Jake, convinced this was an elaborate way to avoid having to meet, agreed anyway.

Tuesday, September 27 at seven PM came. Lauren and Jake spent three hours on their date, one filled with laughter and great conversation. They stayed so long in the restaurant that they closed it down for the night. For the following ten months, the pair went on a date every Tuesday at seven o’clock.

In July of 2020, Jake and Lauren planned to move in together. The day after the move from Lauren’s Brooklyn apartment, they planned a brunch for both their families to celebrate this step in their relationship. Robin, the future maid of honor, distracted Lauren, by asking to see the amenities.

When Lauren stepped off the elevator to return to the apartment, she saw rose petals everywhere. She entered the apartment and was shocked to see Jake get on one knee. She said yes! She loved that he had gathered so many of their loved ones to help them celebrate, too.

Ballroom at the Ben Wedding Attire

Lauren’s wedding dress had a lot of lace detailing, a deep-cut neckline, a mermaid silhouette, and an open back. Those features combined to make a dreamy and subtly sexy wedding gown.

Lauren’s bridal party wore wine-colored bridesmaid dresses with similar silhouettes to her own wedding gown. Each bridesmaid had her own unique neckline, a nice detail that helped differentiate them from one another.

The back of Jake’s tuxedo vest coordinated with the color of the bridesmaid dresses. His tuxedo jacket had a beautiful and interesting pattern on it, which gave the tuxedo dimension.

First Looks at Ballroom at the Ben

Lauren and her father did a first look. A father-daughter first look is similar to the original first look. Instead of the bride’s fiance, though, she reveals her wedding attire to her father. This often makes for some tender moments and photos.

Lauren and Jake also did a first look. Jake looked so nervous before seeing his bride, Lauren. But then, when he saw her in all her beauty and splendor, his face lit up!

We loved the location of Lauren’s two first looks – one with her father, and one with her husband-to-be. That Philadelphia skyline is always beautiful, but it’s even more so when it’s the backdrop for two people in love!

Jake and Lauren chose to participate in the tisch and bedeken tradition, as well as the ketubah. The tisch and bedeken tradition takes place before the wedding ceremony. “Tisch” literally translates from Yiddish into English as “table.” The tisch is a reception for the groom and male wedding guests, centered around a table laden with food and drink.

The bedeken is also known as the “veiling ceremony.” During her own reception, the bride greets her guests while sitting on her bridal throne. During the bedeken, the groom comes in to view and veil the bride. Then, she receives bridal blessings.

The ketubah is the standard marriage contract that a groom must provide to his bride on their wedding day, as Jewish law dictates. This contract is intended to protect the bride. This is accomplished by establishing the groom’s financial responsibilities to the bride in the case of divorce, or if she is widowed.

Ballroom at the Ben Wedding Ceremony

Jake and Lauren were married under a chuppah, which is a type of canopy used in Jewish weddings. The chuppah is a representation of the home that the couple will build together. A chuppah’s four poles and cloth covering symbolizes that home.

Jake broke a glass wrapped in fabric once the rabbi declared that he and Lauren married! There are many interpretations of the symbolism of this tradition. Some include that marriage is fragile as glass, or that life is, so it must be treasured as if every day were the last.

Ballroom at the Ben Wedding Reception

Jake looked so content and happy to hold his wife Lauren in his arms as they danced their first dance as husband and wife. He even dipped Lauren low at the end of their first dance! Then the party really began! Jake and Lauren were lifted while sitting on chairs, a tradition known as the horah. Lauren even got up to sing into the band’s microphone! Jake looked so proud of his beautiful bride and her gifts.

From Lauren and Jake

When J & J Studios asked Jake and Lauren if they had any advice for couples planning their weddings, they said, “Don’t stress!” Then they acknowledged that this is easier said than done. “Even the things that weren’t perfect on the day of were perfect. It’s going to be the best day of your life, enjoy the day and celebrate by letting go of the little things.”

J & J Studios asked Lauren and Jake about their experience with their vendors. They told us they had a great experience overall! “Having people that can listen to your vision and inspiration, and interpret it to give you a final product that feels personal is so important. Additionally, having vendors that are able to make you feel comfortable so you don’t fret about their role, is huge.”