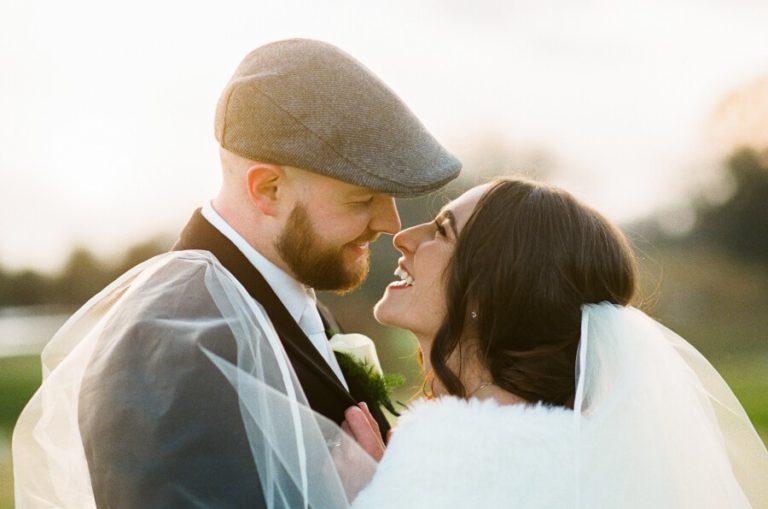 Meghan and Ryan’s winter wedding told their love story, surrounded by seasonal inspiration and a beautiful nod to the season’s scenery. The Springfield Country Club played backdrop for their reception, with gorgeous photography by Ashlee Mintz.

At a glance! Meghan first noticed Ryan in her West Chester University dorm the day she moved in as a freshman. The two of them lived in Killenger Hall, which opened the door for passing hellos and locking eyes until the two struck up a friendship. Sharing a first kiss just months later, Meghan and Ryan clearly had a connection. They’d remain close friends for the next two years, until a trip to Ireland shed light on their feelings.

As the old saying goes, absence makes the heart grow fonder. And absence is the catalyst for Meghan and Ryan’s friendship becoming a love story. During their time at West Chester University, Meghan took a five month trip to Ireland. She and Ryan chatted until the hour before her flight, with Ryan signing off with the Irish blessing. Halfway through her time in the Emerald Isle, Meghan realized how much she missed Ryan, and she wrote him a letter. After her trip, Ryan was the only one that Meghan wanted to spend her time with. After four years of friendship, Ryan asked Meghan to be his girlfriend. Their relationship continued to grow, as did their relationships with each other’s families.

It was a warm and sunny Sunday morning in September, and Meghan and Ryan were preparing to head to Mass. Before they left, Ryan brought Meghan to their front porch, where he had set up candles and photos of the the adventures they had shared. He asked her to marry him, and she said yes! Later that day, their beloved Eagles hit a game-winning 61-yard field goal, further confirming that Meghan must have said the right thing.

Meghan and Ryan said “I do” at Saint Francis of Assisi Church in Springfield, PA. The bridesmaids dressed in emerald and the groomsmen in black, with seasonal bouquets and boutonnieres.

The couple’s reception combined elegant decor with plenty of fun. The Springfield Country Club was decked out for the holidays, and the couple’s bridal party looks and florals matched the reds, greens, and whites well. With a band sporting Eagles jerseys, Meghan and Ryan’s proposal story came full circle on their wedding day.

With a ceremony, reception, and after party in different locations, Meghan and Ryan took advantage of some of the Philadelphia suburbs’ great locations.