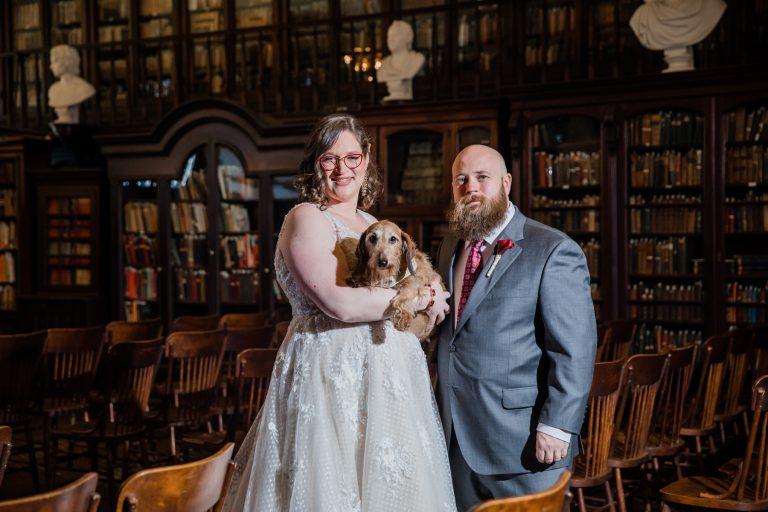 From the photographer, Laura Caporizzo: “The German Society of Pennsylvania was the perfect setting for Tamara and Matt’s wedding day. Tamara prepared in the Director’s Room with the help of her mom and sister. The couple opted not to do a formal ‘First Look’ but instead meet up casually in the Library for portraits. The library was a fitting place for both portraits and the ceremony as Matt works in a library during the week and they are both readers. This couple proves a wedding doesn’t have to be a dance party for guests to have a great time. In twelve years of shooting weddings, this definitely tops the list for most personal and original receptions and I couldn’t love it more!”

Fed up with online dating, Tamara turned to a matchmaker that offered to trudge through online profiles and singles happy hours to find men that were right for her. Matt was similarly fed up – not ready to shell out to hire a matchmaker, but more than happy to join their database in case the right woman came along…. and she did! After their first date, the matchmaker debriefed with each separately – the feedback was something like “it was a good date, no concerns”. That might sound mundane, but you should’ve heard some of the debriefs after other matches!

The proposal story is really simple… there wasn’t one! Matt and Tamara had been talking about getting engaged and neither felt the need for a big sweeping romantic proposal, so they decided together to be engaged! Yay! This happened on a lovely spring afternoon in April sitting outside on the patio behind their house with their pets, Liebe (dog) and Marmalade (cat). They kept the news to themselves for a little while, opting to share with their families on Mother’s Day and the mothers were thrilled!

“We put a lot of thought into most every aspect of this wedding, being intentional about the choices we made. A lot of this was to create a day that we would be able to enjoy, such as forgoing traditions that made either of us uncomfortable and limiting the size of the guest list. We were also very conscious of wedding costs, not wanting to rack up a huge bill for a single day. We were very fortunate to have Tamara’s family nearby who were happy to help out, particularly her mom who took the lead on quite a few parts of the day including working with the caterer.”

“We got married at the German Society of Pennsylvania, the ceremony being held in the library surrounded by the warmth of old books. It helped keep the decorations we needed to get to a minimum! The venue had a lot of different spaces that we were able to use for different parts of our event including getting ready, ceremony, reception and a board game after party.  They were also very flexible with the rental time (you could rent for the whole day, not a limited amount of time like 5 hours we were told at many other venues) and they allowed us to use any caterer. One of the other things important to us in selecting a venue was making sure our space rental costs were going towards supporting a nonprofit.”

“We were inspired by a lot of our interests/passions. Tamara is a big math nut, which lead to the selection of pi day (March 14) as the wedding date.  And with a wedding on pi day, one has to serve pie rather than cake! Matt and Tamara are both into board games, Matt especially so as he recently developed and published a board game. This inspired having board game playing at the event and getting custom dice as party favors. We tried to make the day as personal to us as we could, from the celtic music as we walked down the aisle and serving mead as a beverage as a nod to the Renaissance Faire, to beer bottle center pieces painted with dachshunds to honor our pup (who was also with us all day!)”

“My favorite part of the day was the board game after party. We were a little worried if all of our guests would be into this and had planned some overlap with the DJ in case people wanted to stay upstairs dancing, but we were happily surprised that everyone was excited to play board games!  I had a moment where I looked around and saw everyone playing. I didn’t have to coax or encourage anyone to pick up a game and I was able to relax and play a game myself!”

Another memorable moment for me was the mother-daughter dance. My (Tamara) mom is a dancer and dance teacher and I let her choreograph a dance for us to do together. She was beaming the entire day and it was special to give her a chance to show exactly how she felt through movement!

“Not everything will go as planned – expect that and be okay with rolling with it! Our wedding turned out to be at the start of when the coronavirus crisis was becoming serious and guidance was being put out to limit the size of gatherings. We were still able to hold the wedding, though we would not have if it had been a week later! Close to half of our guests ended up cancelling, some who were traveling to Philadelphia but many of who were local. It was a very stressful week leading up to the wedding with more guests calling every day to cancel, but we had much of our family here and we had a lovely day.”

“The venue was very responsive, answering many questions we had throughout our planning and giving us great recommendations of other vendors to work with. They let us drop things (decorations, beverages, etc.) off the day before and pick them up after the weekend so we had everything there the day of the event. They were very flexible and great to work with. Our DJ was Kim, from No Macarena. We did not have a lot of strong feelings about the music for the day, so we put a lot of trust in her and it worked out! She did everything we asked of her in regards to the announcing around the event.

Laura Capporizo was our photographer and she was great. We did an engagement shoot with her before the wedding to get to know her and how to work together which was really helpful. She captured some beautiful natural shots as well as the obligatory posed ones. We have a lot of special images to remember our day because of her.”

Vendors | Venue: The German Society of Pennsylvania |Matchmaker: Michal Naisteter |Photographer: The Philatographer® (a division of Laura Caporizzo Photography) |Featured Game Created by the Groom: Bee Lives: We Will Only Know Summer | DJ: Kim from No Macarena