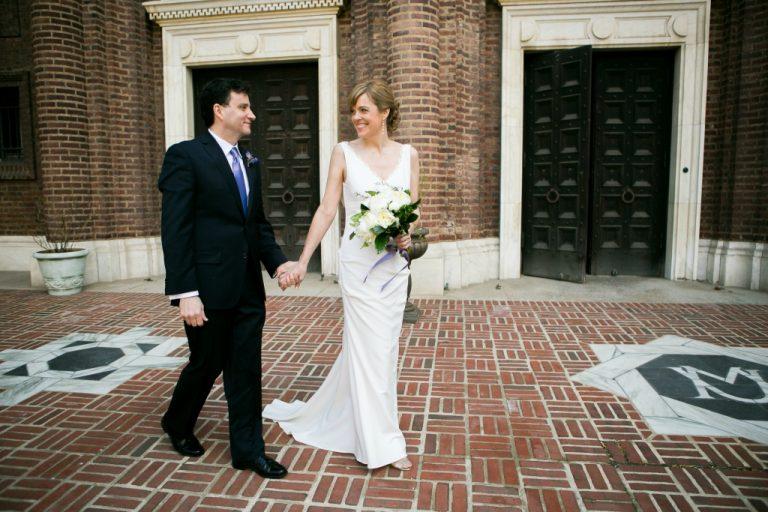 After elopement plans at City Hall were out of sight and out of mind, this couples special day turned into an intimate Parisian themed wedding that was absolutely lovely!  Robin and Chris’s chemistry throughout their wedding day communicates a simple elegance that was captured by Lindsay Docherty Photography.  The University of Pennsylvania Museum of Archaeology and Anthropology was an appropriate venue for this small ceremony that was simple and sweet.   Succeeding the ceremony the party moved to Beau Monde for cocktail hour, and later ended the evening with dinner at Bistrot La Minette.  The restaurant was beautifully decorated with colorful blooms created by Petit Jardin en Ville, which set an ethereal French mood for the night!  The entire day was definitely unique and truly remarkable, and all of the beautiful photographs and behind the scenes details are below.

From the Photographer, Lindsay Docherty Photography: “Robin and Chris came to me like many before them – they were thinking of having a small, easy wedding ceremony at City Hall, and wanted some beautiful pictures to commemorate the day. I talked them through the opaque process, and the ins and outs of Philadelphia City Hall weddings as they worked the logistics out on their end. As they got closer to the day, they realized that they had more guests than originally planned, and the date itself was getting tricky. I had posed the idea of getting married somewhere else Quaker style or with an outside officiant. City Hall had been a big draw but this idea was looking more and more attractive. Chris came upon simple and sweet ceremonies hosted at the Penn Museum of Archaeology and Anthropology and it was right up their alley. A few confirmations later and we had ourselves a wedding!

It was a lovely day and the wedding was delightful. They exchanged rings and vows in front of the Sphinx in the Egypt room before reuniting with their guests as they threw birdseed’s out in the front garden. As their guests went off for cocktails, I got the two all to myself for pictures around the museum. I should clarify that they were not “all to myself.” As we wandered to the Stoner Courtyard, three Frenchmen in wet suits were getting into the fountain and playing music on found and recycled objects. I couldn’t even make this stuff up! We enjoyed the soundtrack as romantic Chris waltzed with Robin. The performers indulged us for some pictures before they left. We then walked back through the museum to the China exhibit, and came upon a team preparing for a televised corporate function in the room. We got a few images there and on the stairs before meeting up with the guests again. Everyone had gathered in Bella Vista at Beau Monde for drinks while we were out on the town. I left them as they were making their way to a beautifully set dinner at Bistrot La Minette across the street. It was a beautiful, quirky day and I’m so glad they went for something unique and brought me along for the ride! Congratulations, Robin and Chris!” 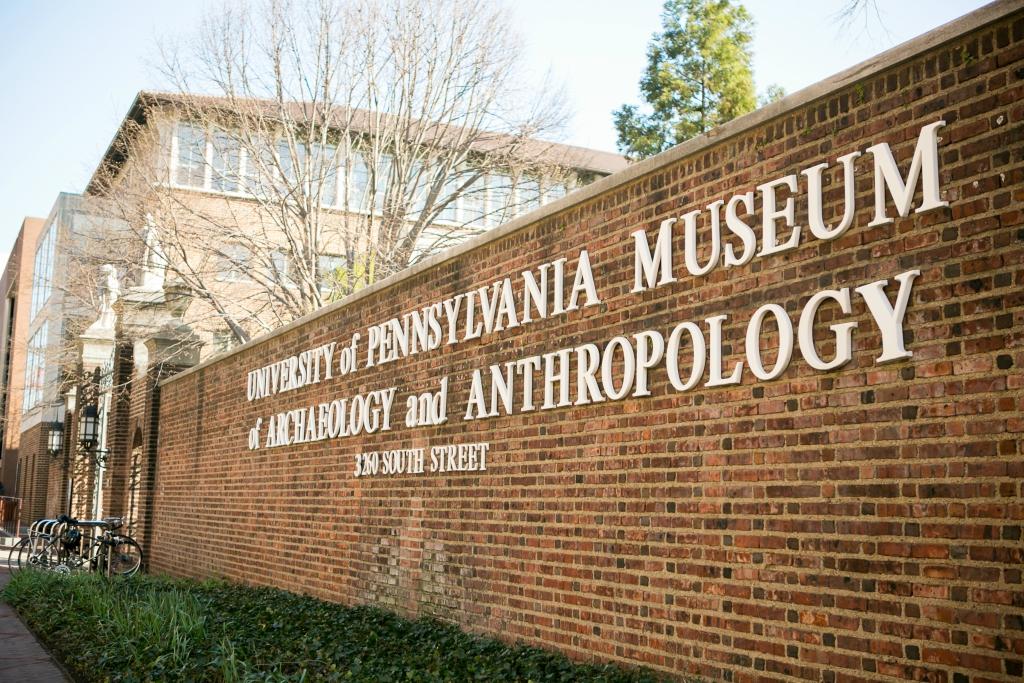 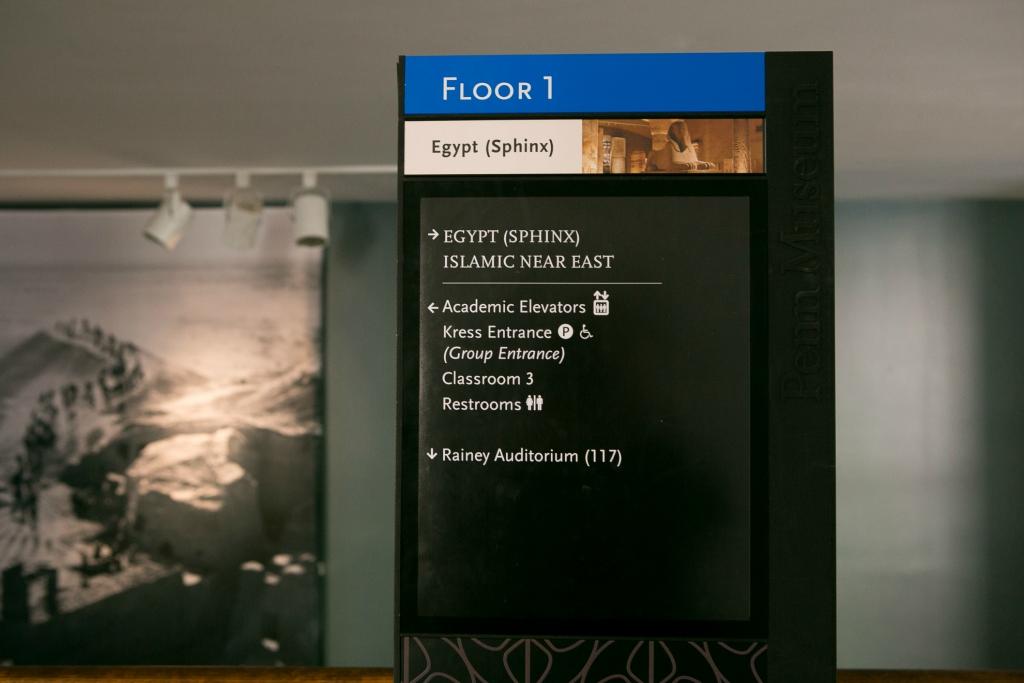 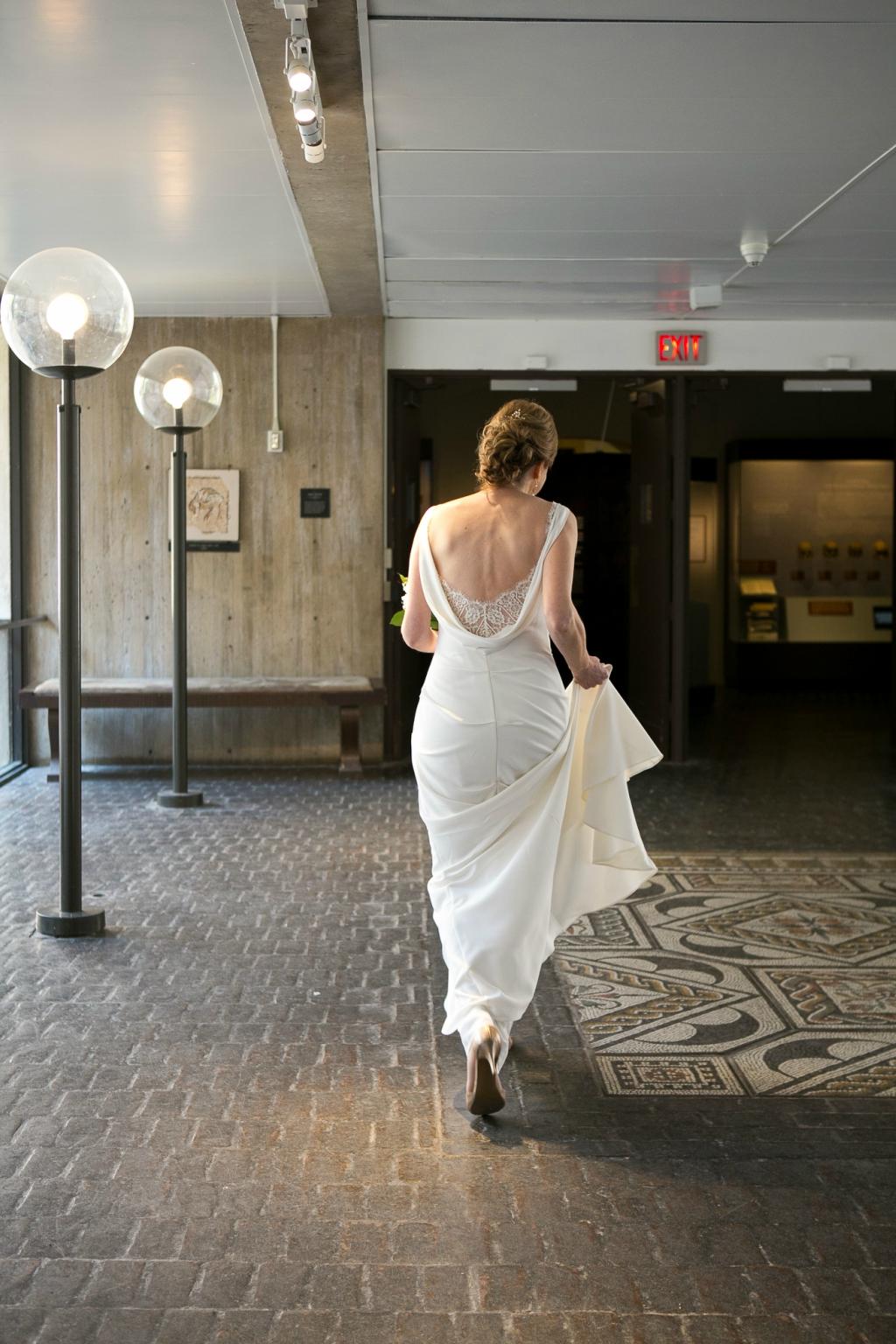 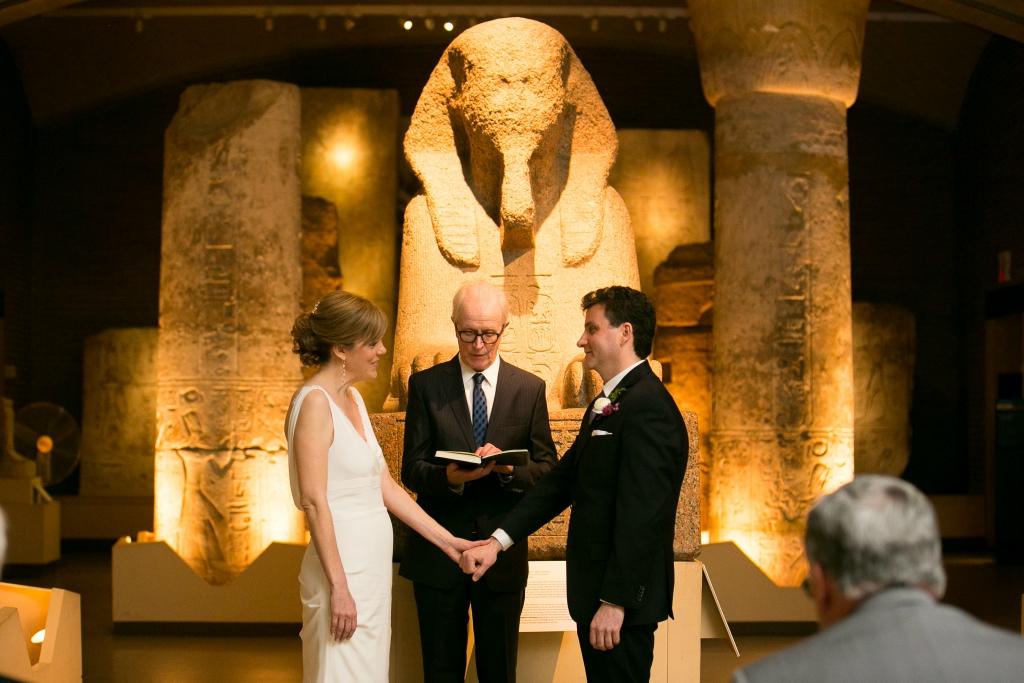 “We met on an online dating site.  I was just starting and he had said this would be his last date since he had been frustrated with the process and the dates he previously went on.  Good thing I didn’t wait another month or I don’t know how we would have met.” 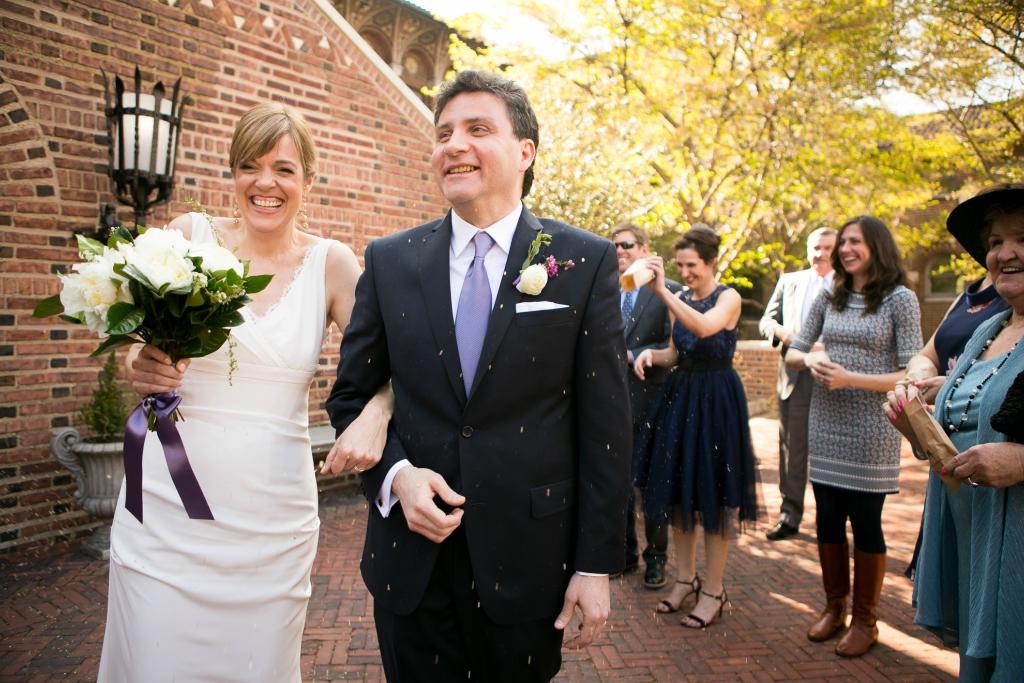 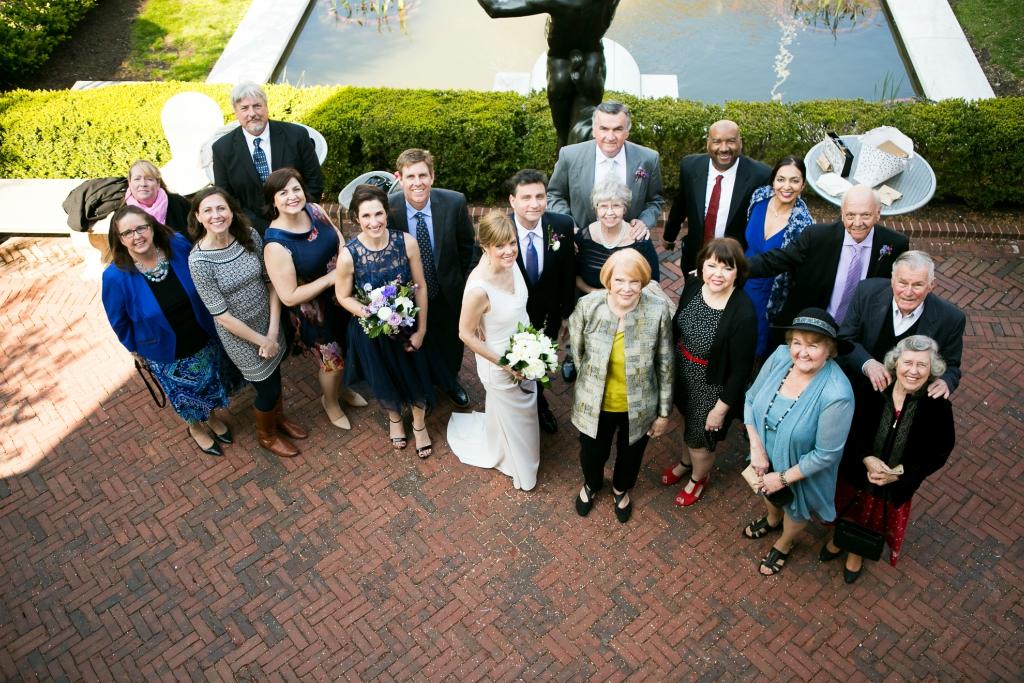 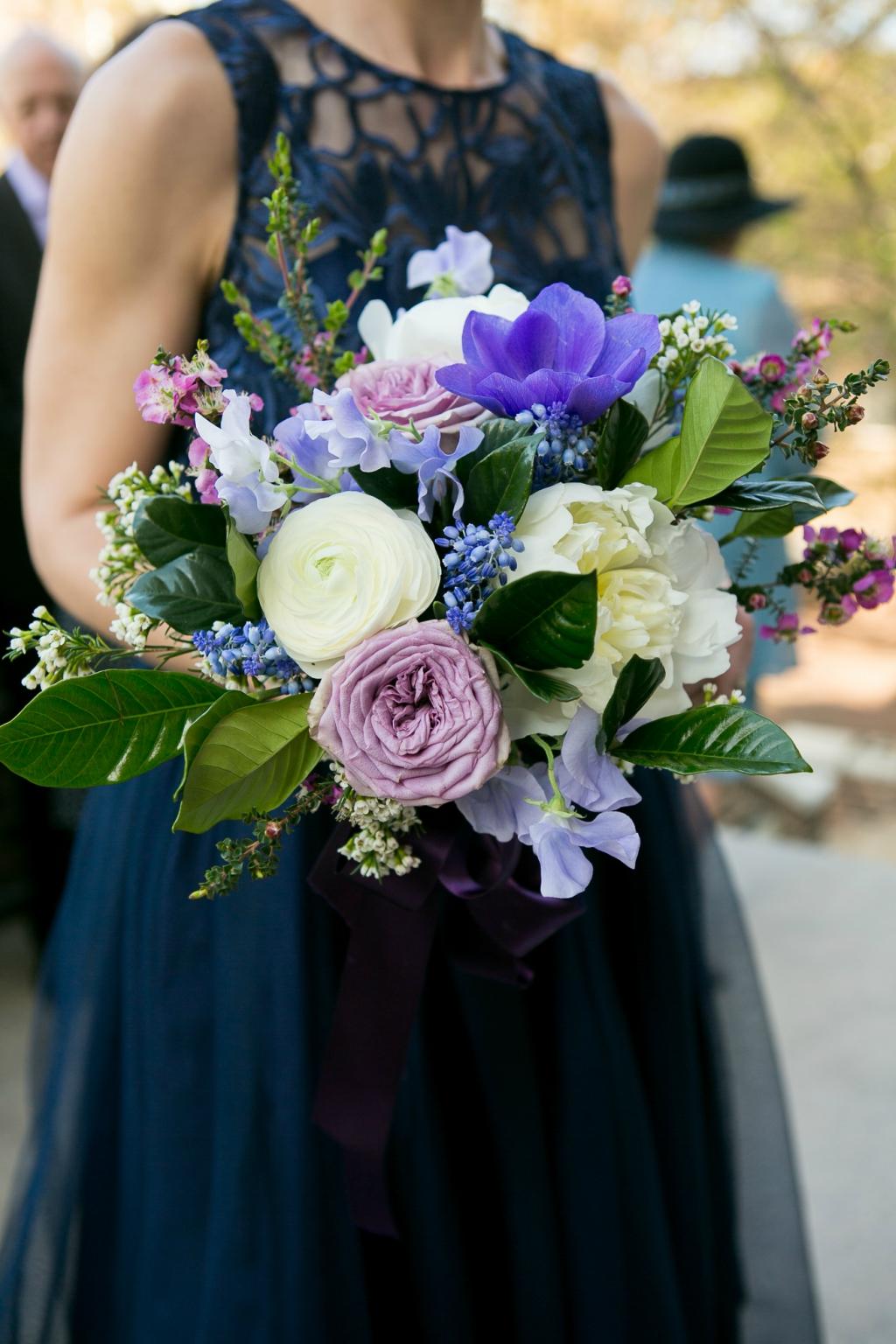 “I had no idea he was going to propose and he came up with a pretty elaborate plan to surprise me.  He took me out for a fancy dinner (Fork in Old City), knowing me so well, he knew that I would suggest that we take a walk afterwards.  I suggested we walk by the location where he first told me he loved me (he also somehow knew I would do that) and he had hired someone from the Olympia (historic ship museum) to stand in the park in a historic sailor uniform with a lantern, and a basket full of flowers. The sailor represented his grandfather as he had served on the Olympia and my husband had written out a poem for the sailor as if he were his grandfather, and then of course followed it up with a poem in which he proposed.  He had a beautiful bouquet of flowers which he had wrapped in a ribbon from Tiffany’s to represent that I could pick out my ring from wherever I wanted (he knew that I would want something unusual and to allow us to pick it out together) and in the ring’s place had a compass that he engraved because he said I was his compass.  We went out and celebrated with champagne afterwards and he suggested we go by and look at the Olympia as a possible wedding venue.  We stopped the car near the Hyatt hotel and he asked that I go in to check on if we could park there, when I went in I was greeted with keys to a room he had reserved and when we entered the room (a suite on the top floor) there was a gorgeous arrangement of flowers, chocolates from Shane’s confectionery and the most touching thing to me is that he had packed an overnight bag for me and remembered everything (a change of clothes, my makeup, etc).” 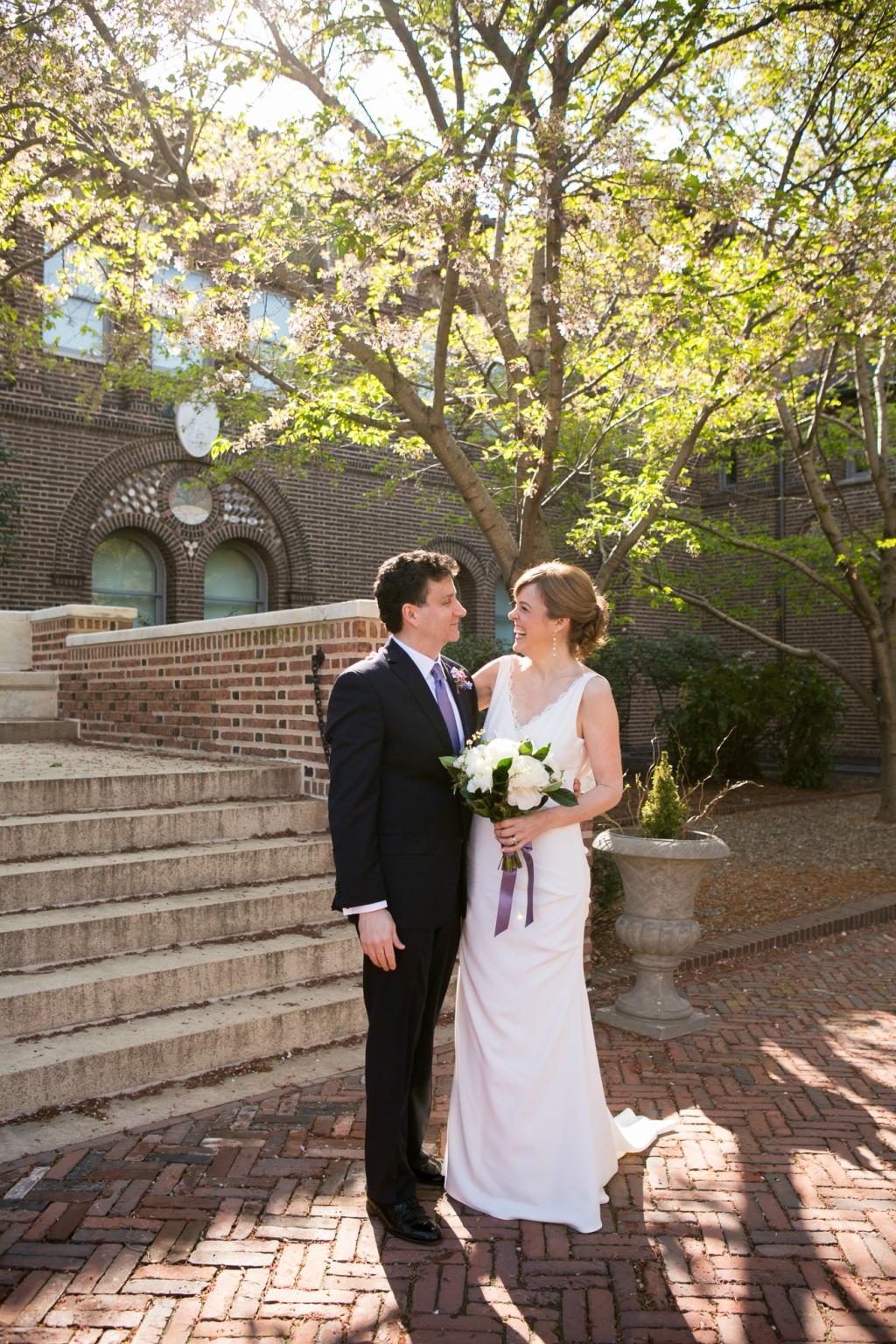 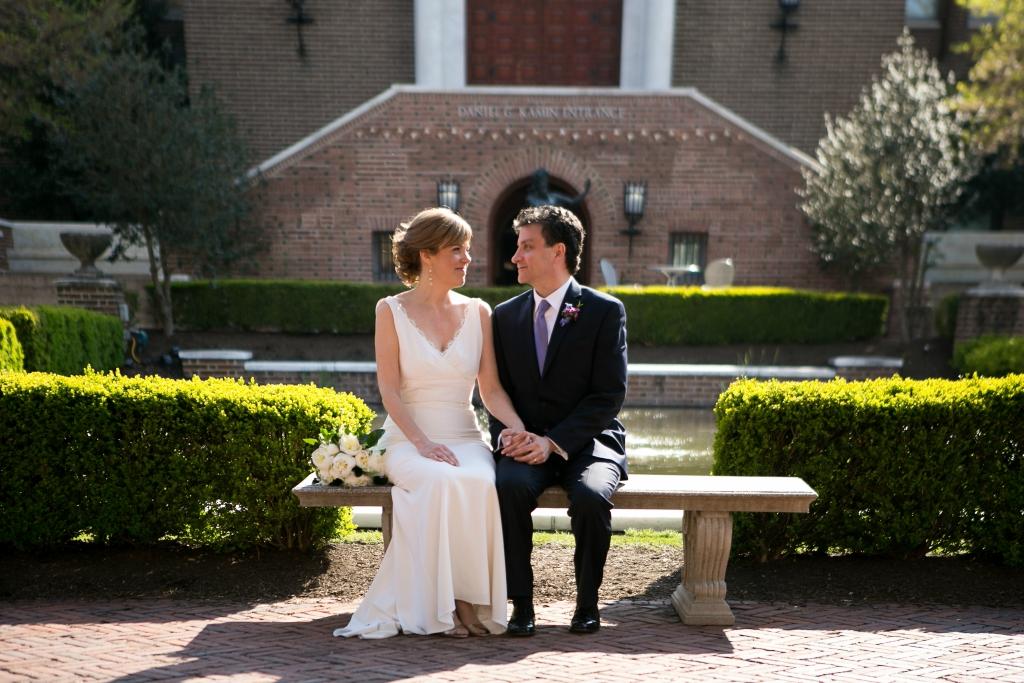 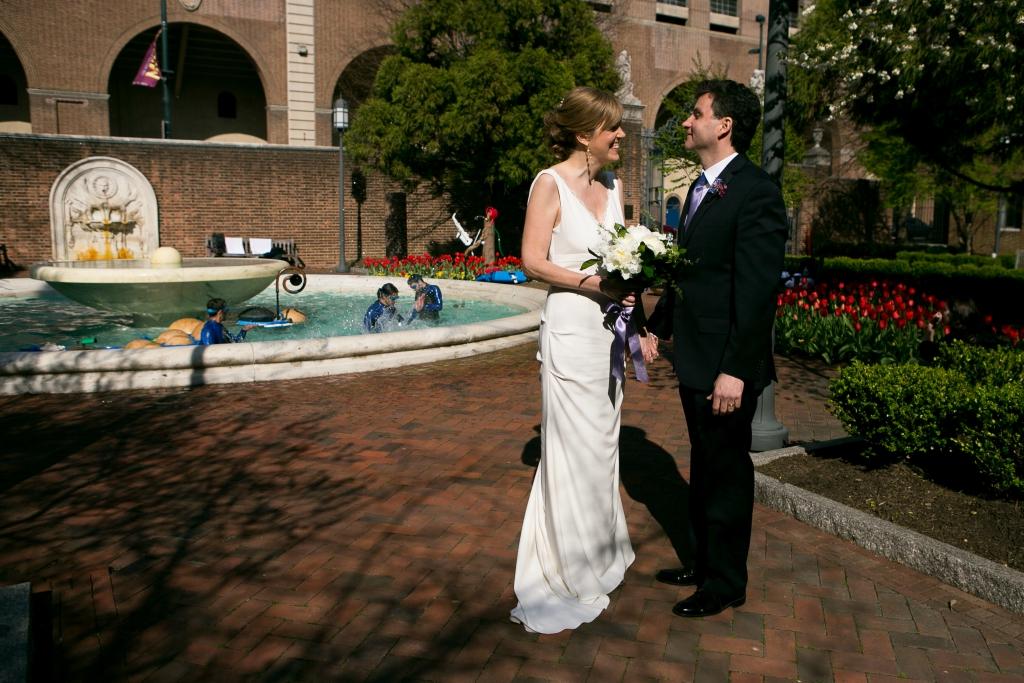 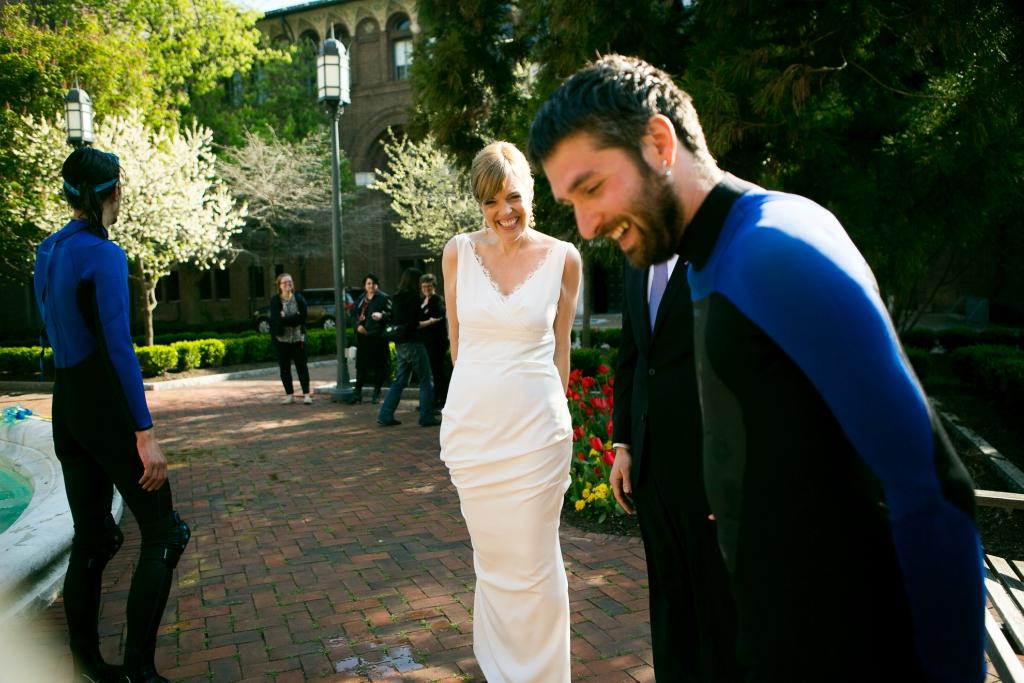 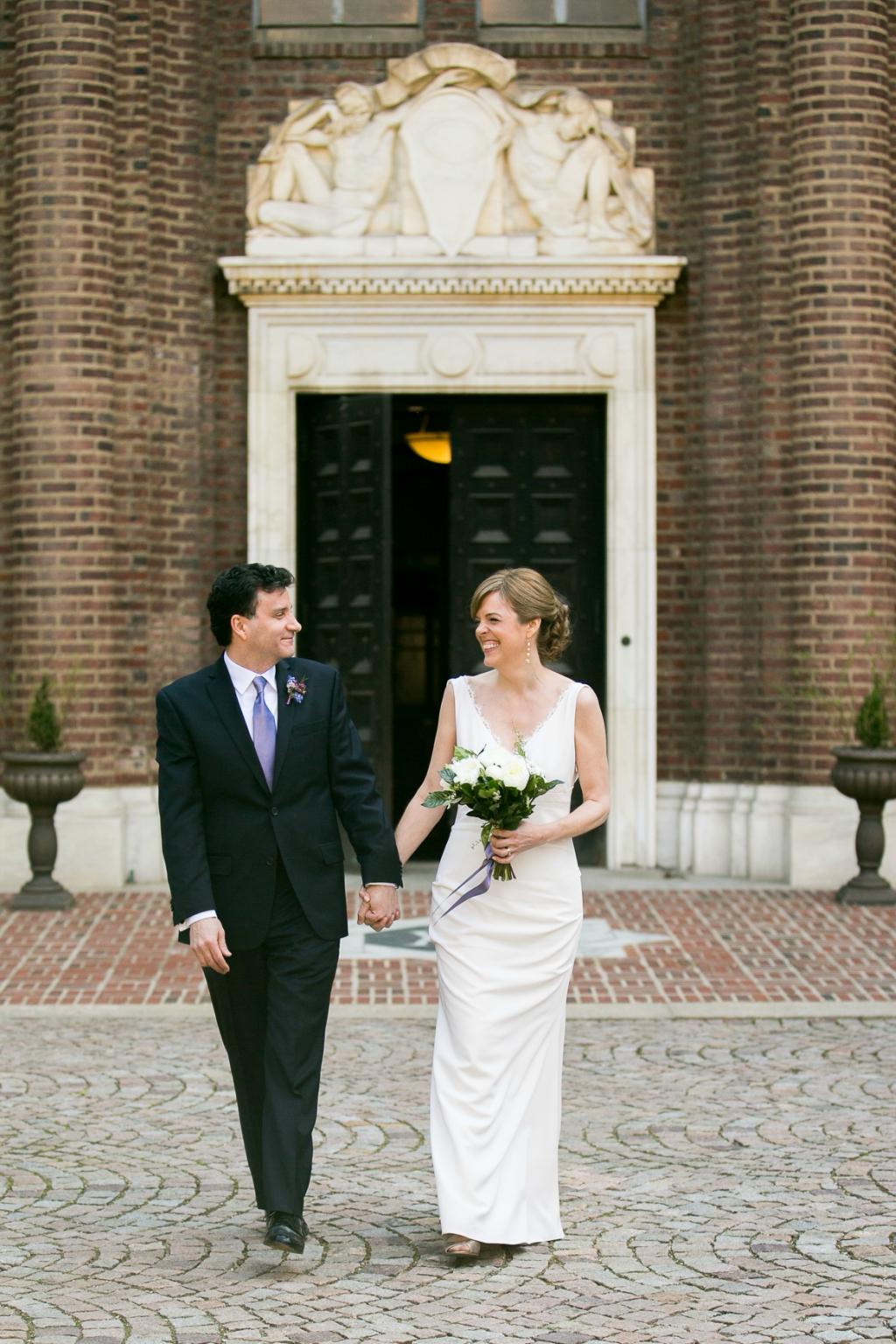 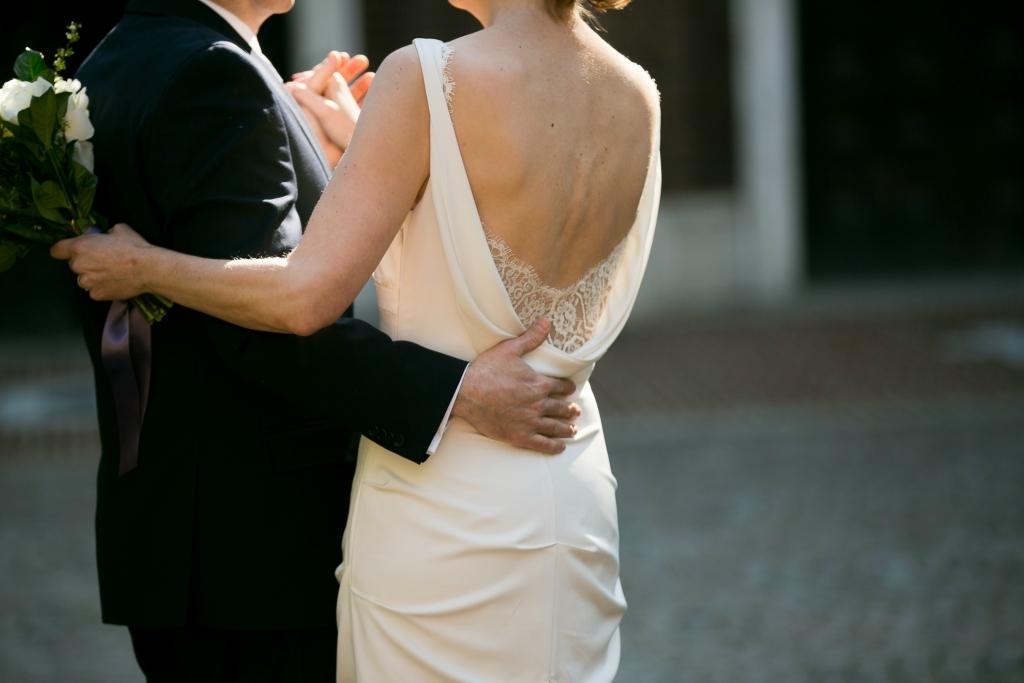 “Well we were pretty non-traditional, we were engaged for about 2 years and then decided to plan everything in about 3 months.  We had a small wedding so we could do that, I really liked getting everything organized quickly, and everyone we worked with was great.” 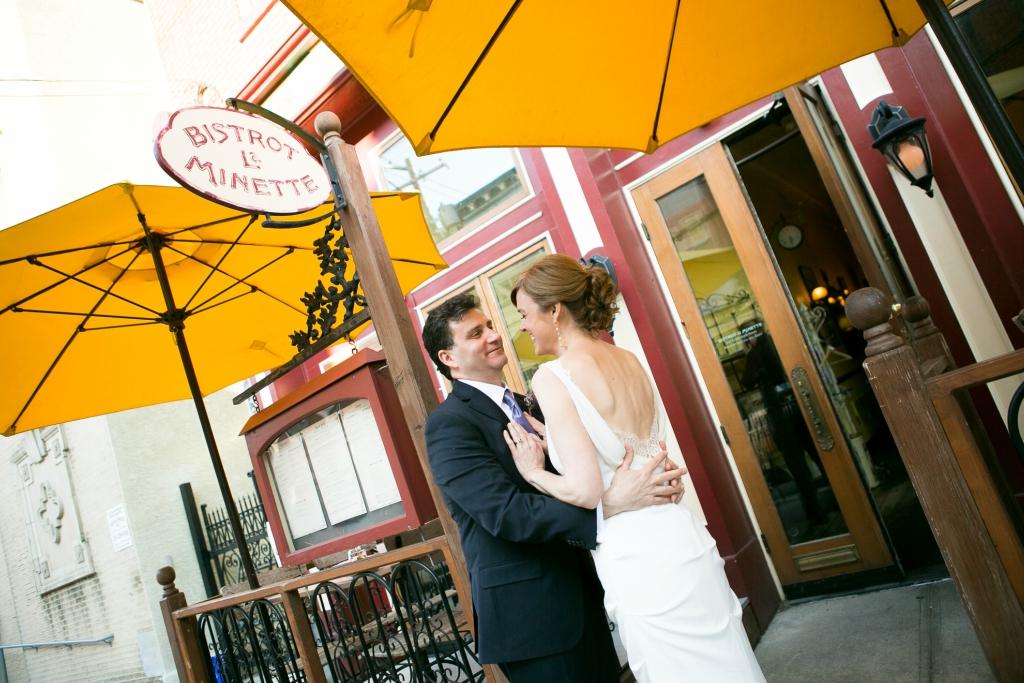 “We were looking for somewhere unique and beautiful that lent itself to a smaller wedding.  We were really happy with the Museum of Archaeology and then had an intimate delicious meal afterwards at Bistrot La Minette.” 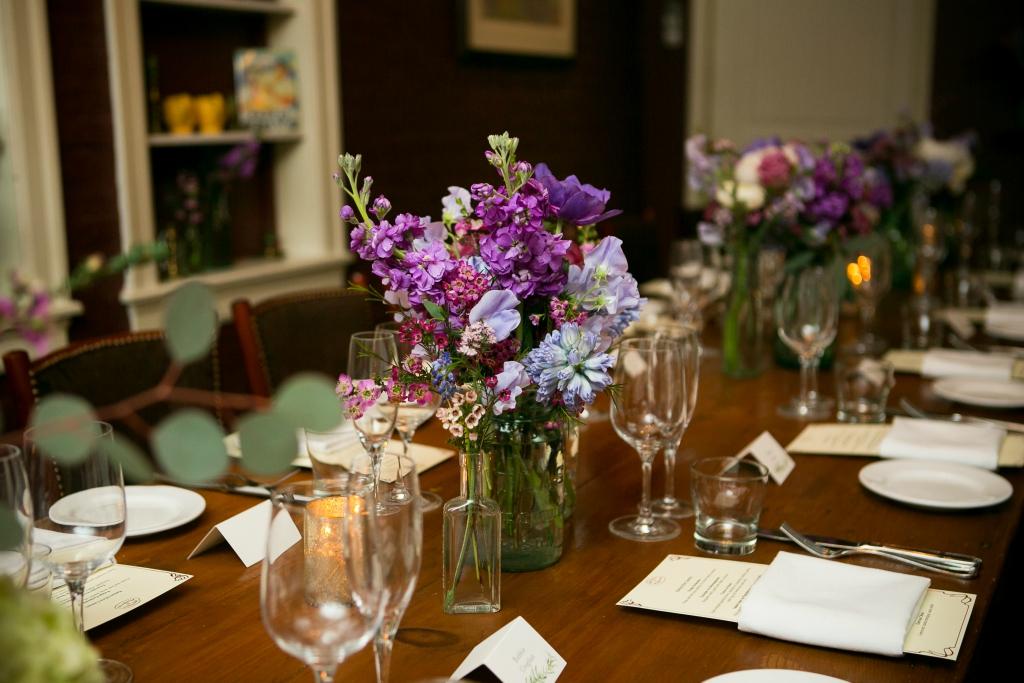 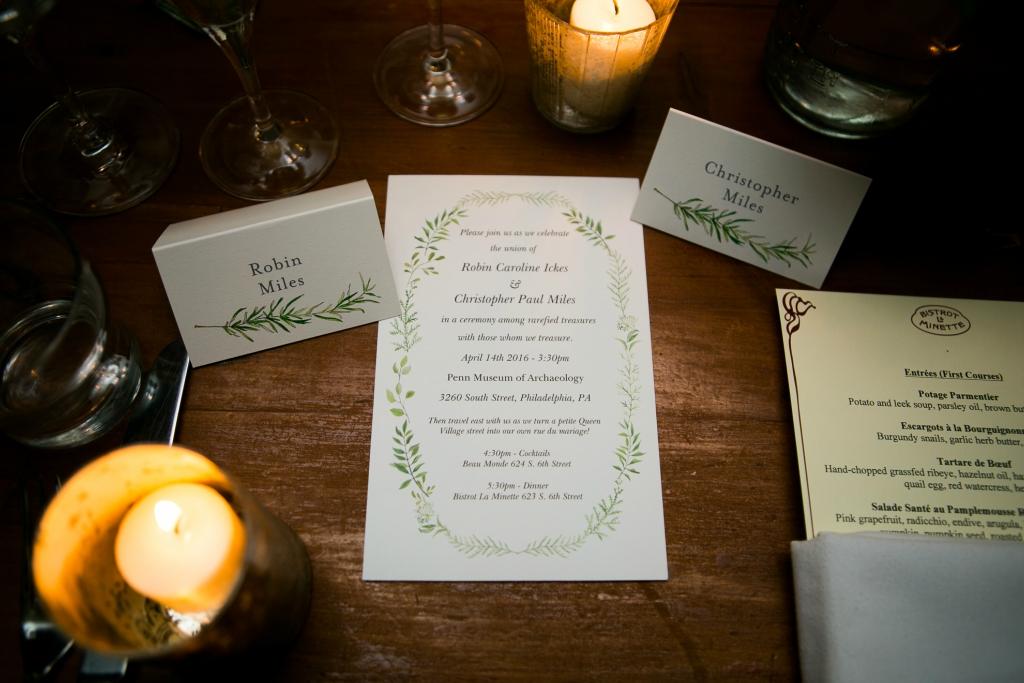 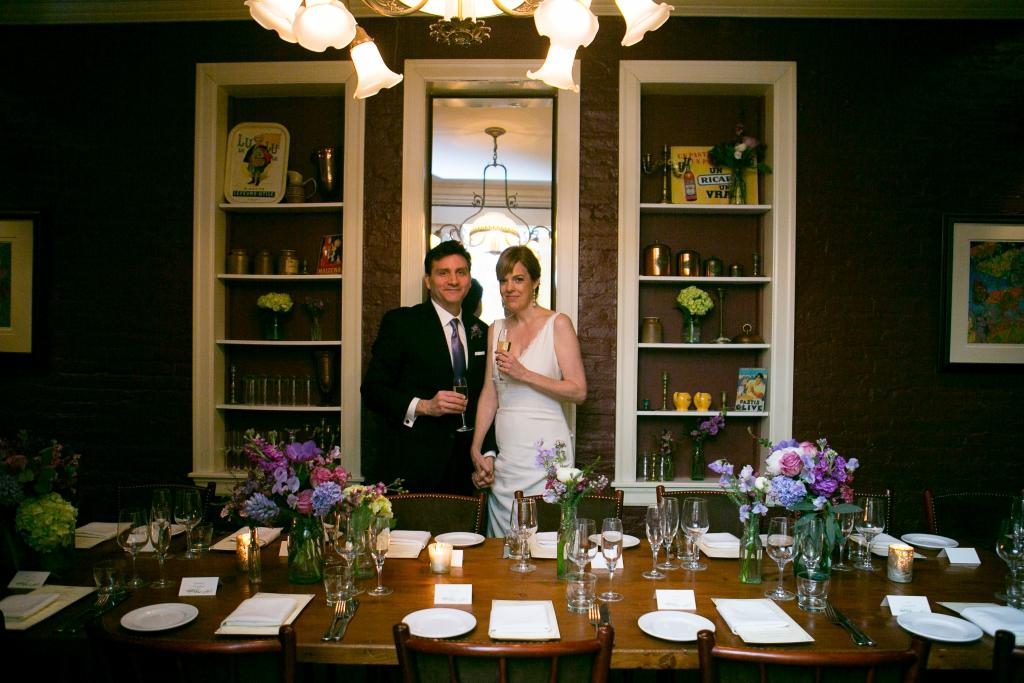 Best Wedding Memory:
“We ended up having a French theme to the wedding (restaurant, bar, and florist)  and we had a serendipitous moment while we were taking pictures on the grounds of the museum, there was a French band playing in the fountain, yes, in the water.  They were rehearsing for a performance art piece and they took their picture with us, it was hilarious and something we will never forget.” 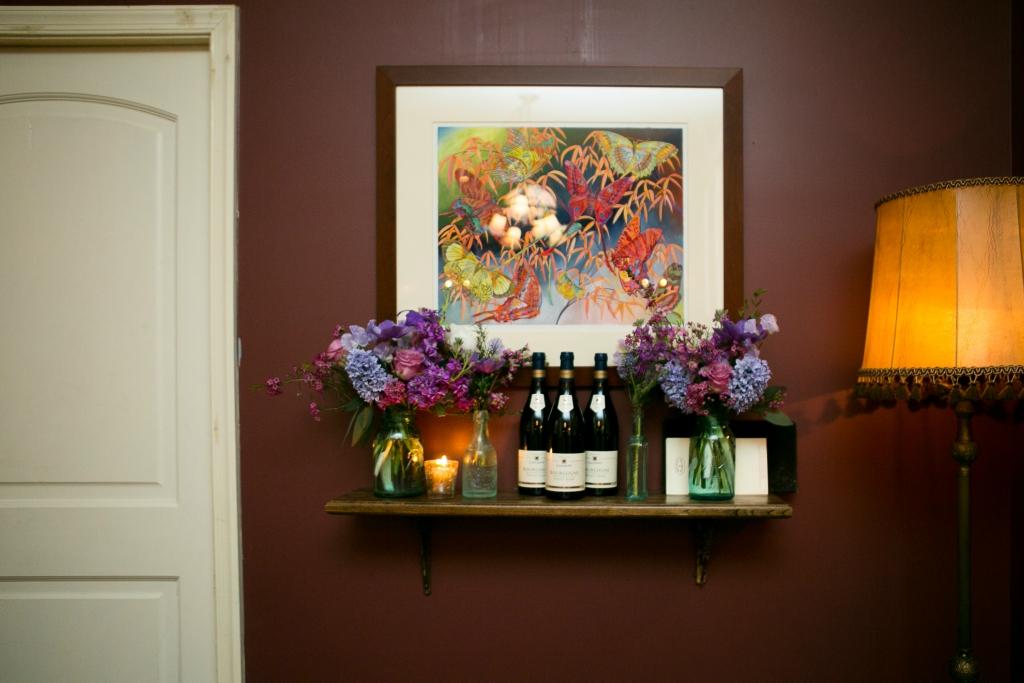 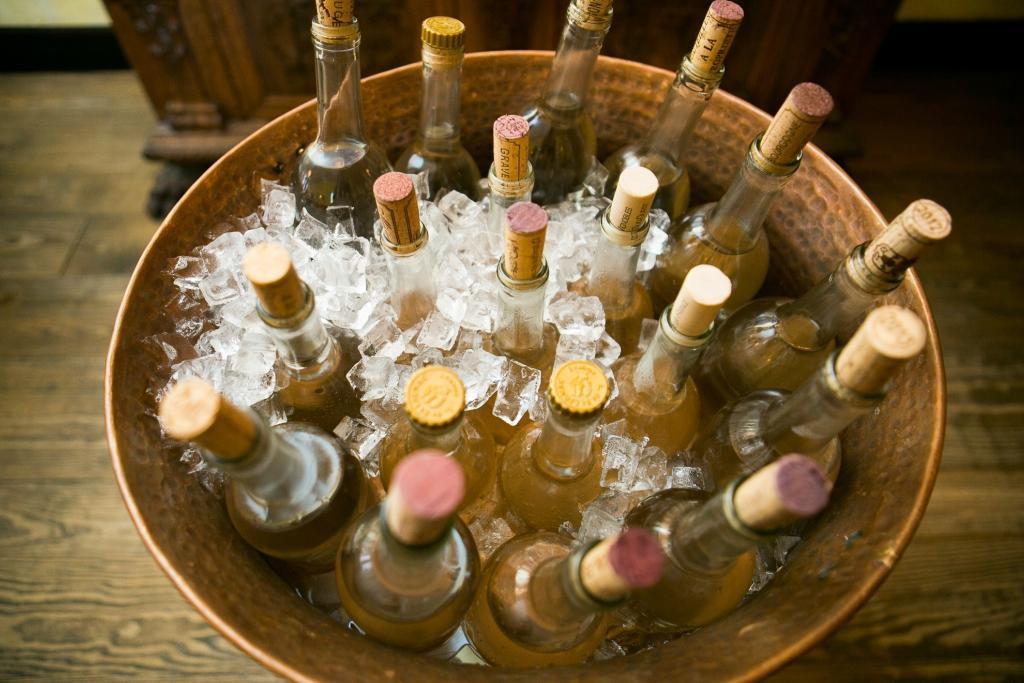 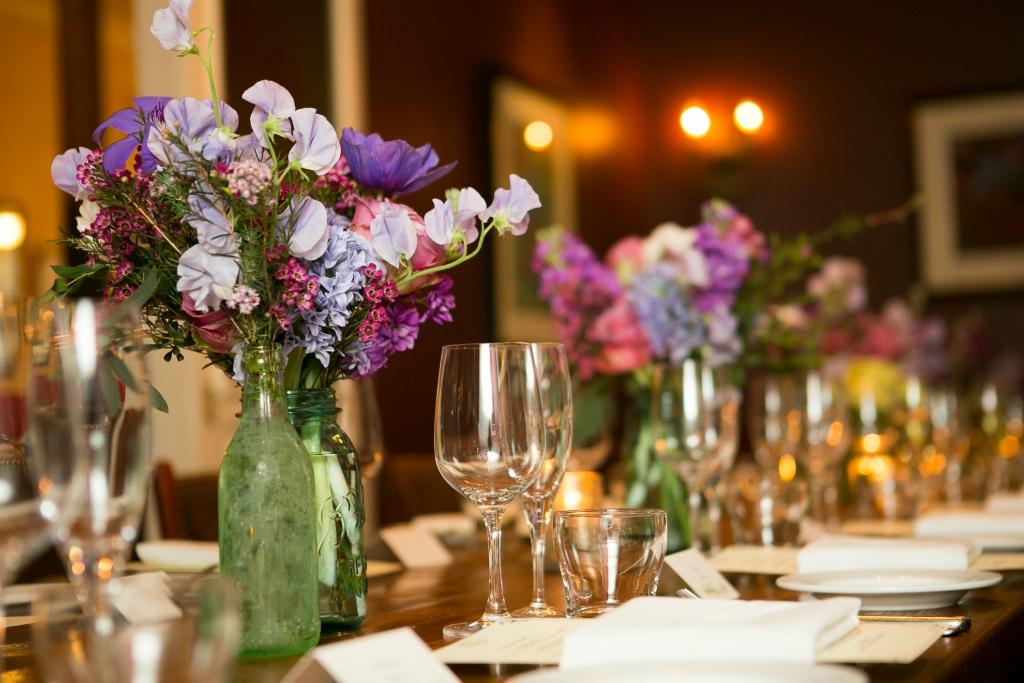 “Ask vendors who they like to work with, I got a fantastic makeup artist by asking my photographer who she would recommend.” 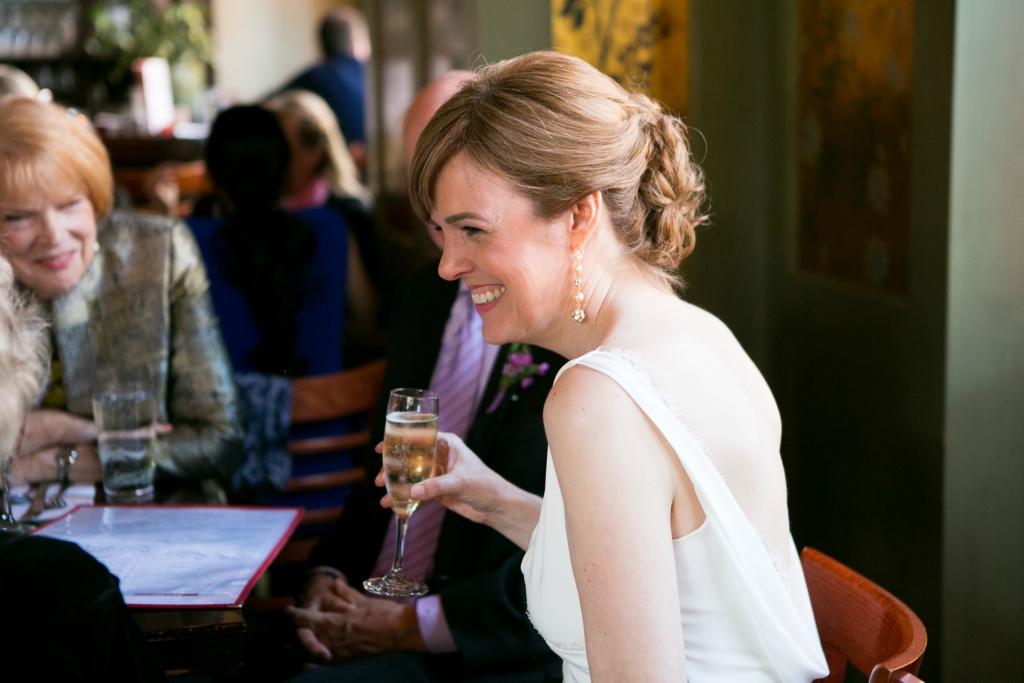 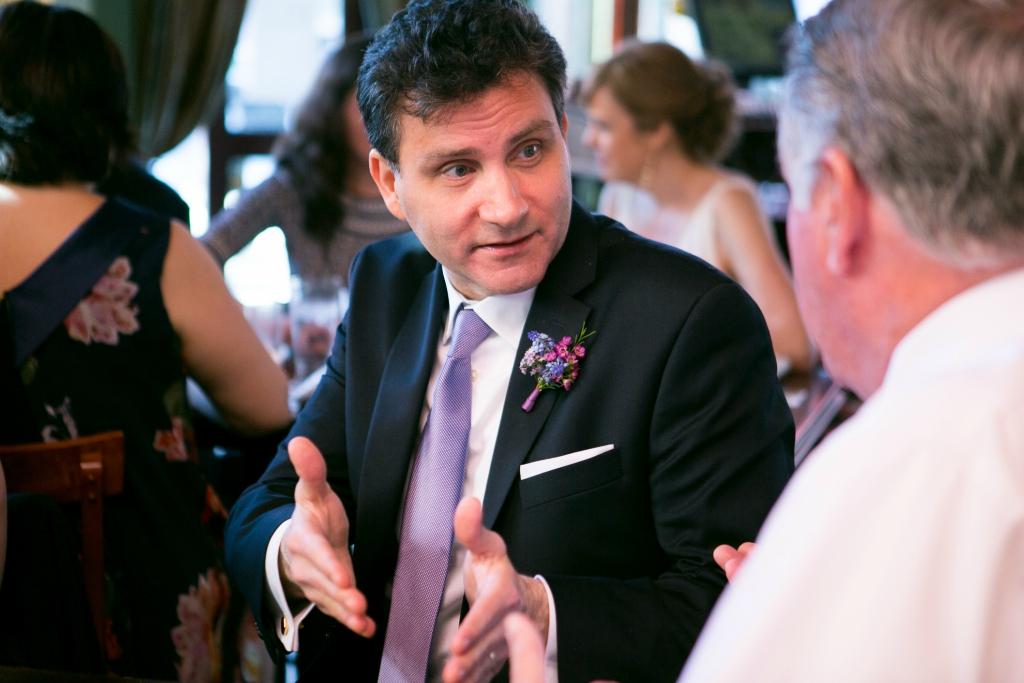 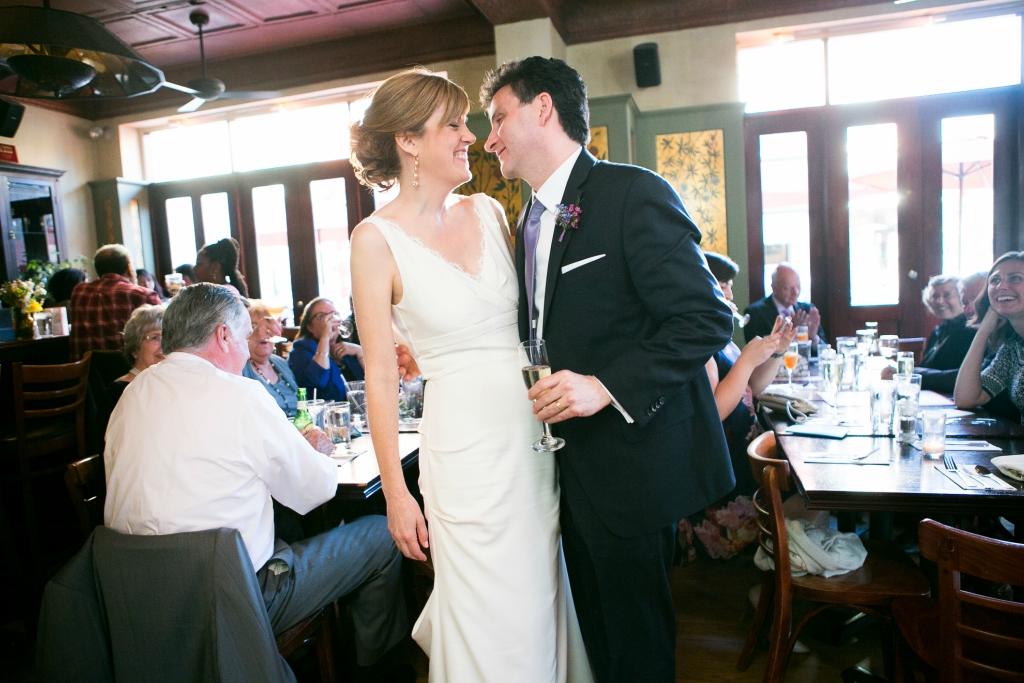 “I feel really lucky, I had a really good experience with all my vendors, they all seemed to be genuinely excited to be part of my wedding.”