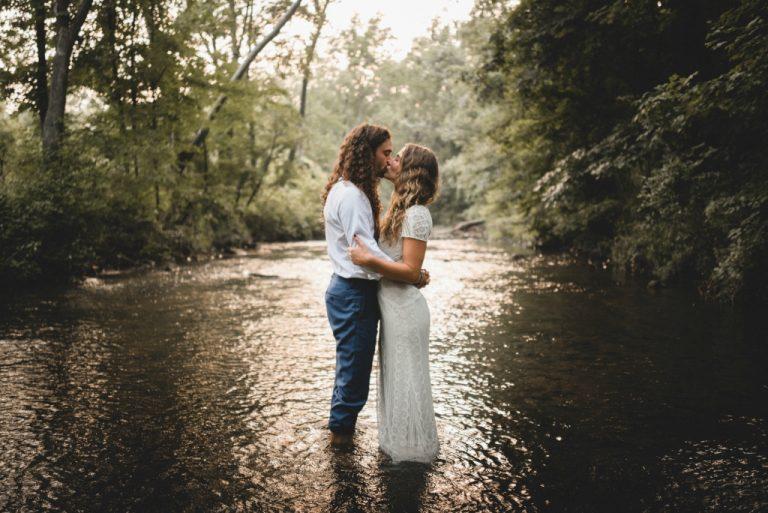 A Philadelphia couple turned the end of their wedding ceremony into the beginning of a music video, and we absolutely adore every minute of it!  Luke O’Brien has been writing, performing, and producing music for over a decade now so it comes as no surprise that he took a creative, musical approach when he decided he was going to propose to his high school sweetheart, Kathleen King AKA “DJ Leen.”  Luke wrote and recorded a song called “Old Love” which has two versions.  Version A is the “album” version in which the lyrics in the bridge allude to the idea of “making it official”, or, getting engaged.  However, in the B version, producer Jon Bonus, breaks the instrumental down to just drums as Luke proposes marriage to his now wife.  The first time Kathleen heard it, Luke was on one knee.

After Kathleen said “yes!” and wedding planning had ensued, the couple figured since the song worked so well for the proposal, why not incorporate it in the wedding somehow?  Watch the lovely wedding music video below that shows all of the love, tears, and joy that transpired on a beautiful day that even rain couldn’t stop!

Hairstyles were ruined and makeup was running but when everyone made it to safely in the barn, all you could see were smiles. The rainstorm had set the tone for the rest of the night. There was a carefree vibe in the air as the sun came back out, revealing a less humid, cool, summer night in Chester County, Pennsylvania. Everyone danced, laughed, celebrated, and, joined in for take 2 of the old love music video shoot on the dance floor. 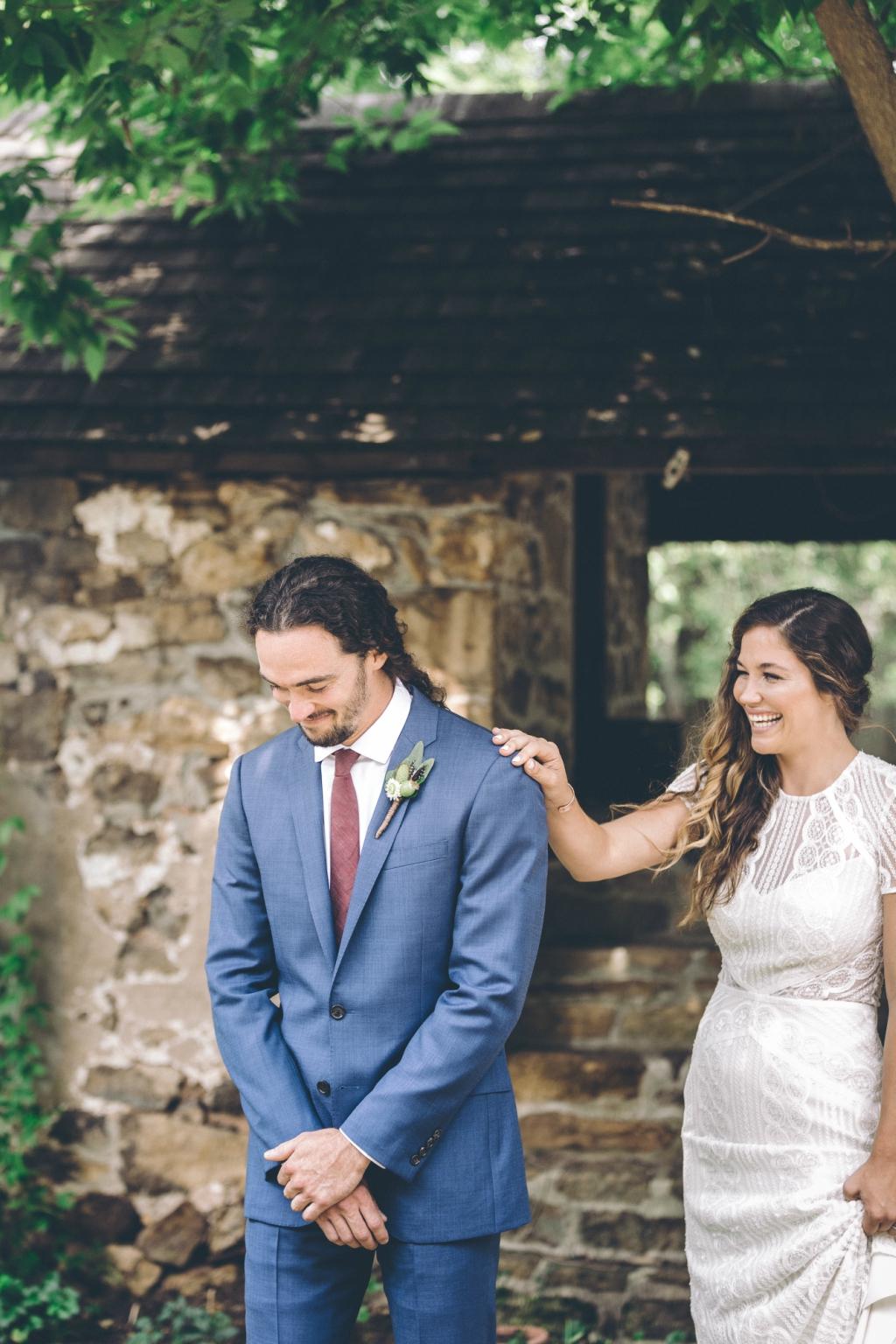 “Luke’s proposal blew me away. It was a Sunday, last summer and Luke picked me up from a girls weekend at the beach. The plan was to go to his parents beach house close by and spend the day with his parents and sisters. Since he was gone for most of the summer writing and recording new music in Colorado I was thrilled to spend the day with him and his sisters. Half way to his house he gets all excited and tells me his producer just sent him the final versions of some of the music he was working on. He asked if we could listen to them so of course I said yes! He played two (amazing) songs before he pulled over and said, “lets listen to this one before we get home, I don’t want my family to hear it yet” I laughed and got excited, like “yeah, pull over only I can hear it!” It was a love song, up beat and totally amazing. *he had read me the lyrics when he first wrote them a few months back* So it was super amazing to hear the verses and the song that went along with it. Half way through, the music cuts out and I hear Luke speaking to me through the speakers. He said he has loved me forever and then says the first time you hear this song, I will be down on one knee with a ring in my hand. In that same moment he opened the car door and got down on his knee and we both started crying and I started freaking out undoing my seat belt and climbing through the car and hugging him and crying even more. It was totally amazing and then he surprised me with my whole family and his at his parents beach house when we pulled up. We spent the day on the beach with champagne and laughs and it was truly magical.” 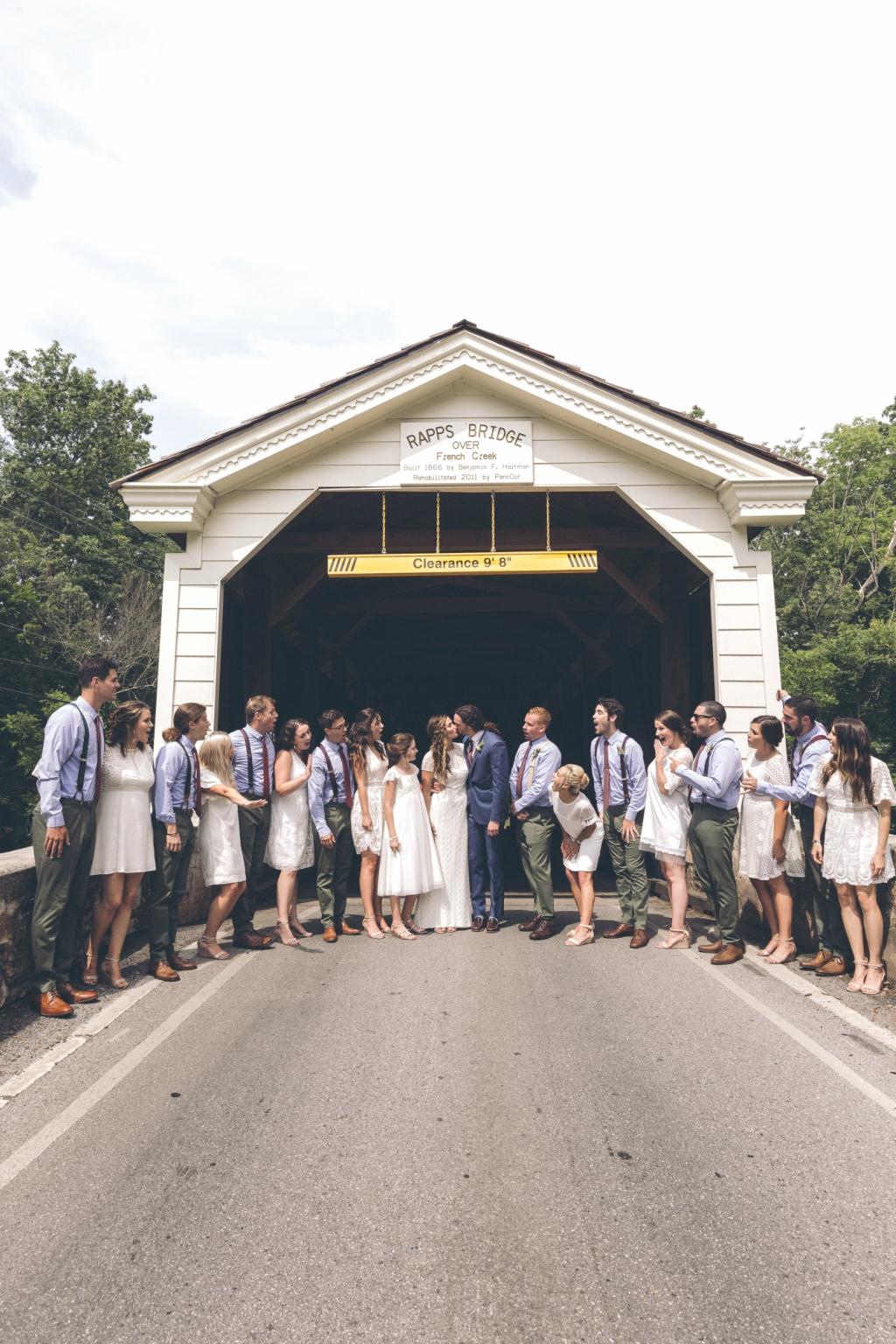 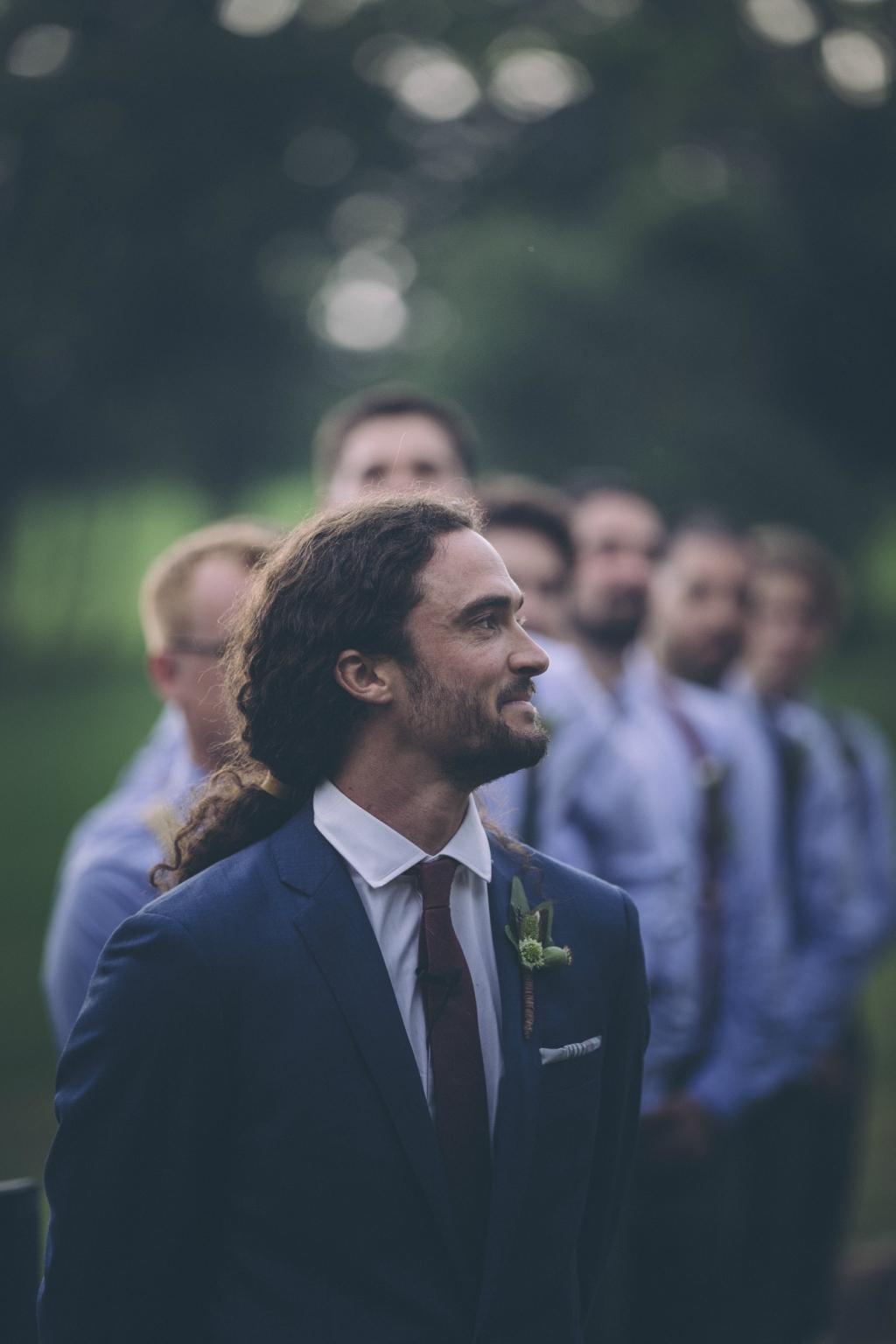 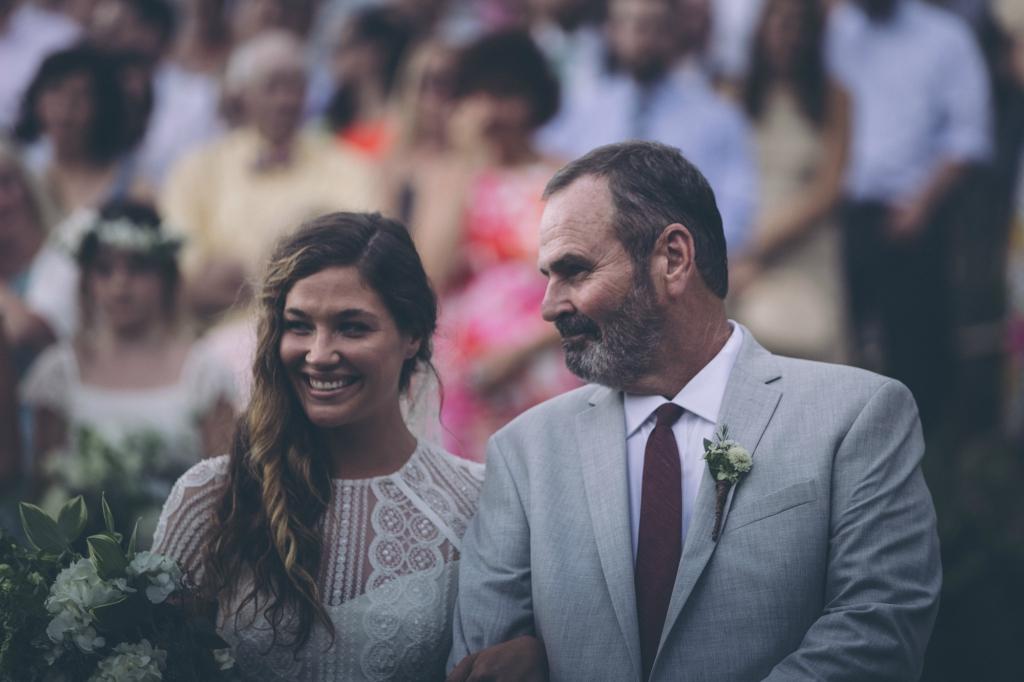 “Our venue is a private property about 1/2 mile from Luke’s parents house. A friend of ours restored an old barn on his property and that’s where we chose to get married. We had the ceremony on his property that overlooked a creek and woods. We chose it because we knew we could turn it into the vision that we had created in our minds. A special detail about the venue is that when Luke was a kid growing up, this property was a summer camp and Luke went there as a kid. So it also had sentimental value.” 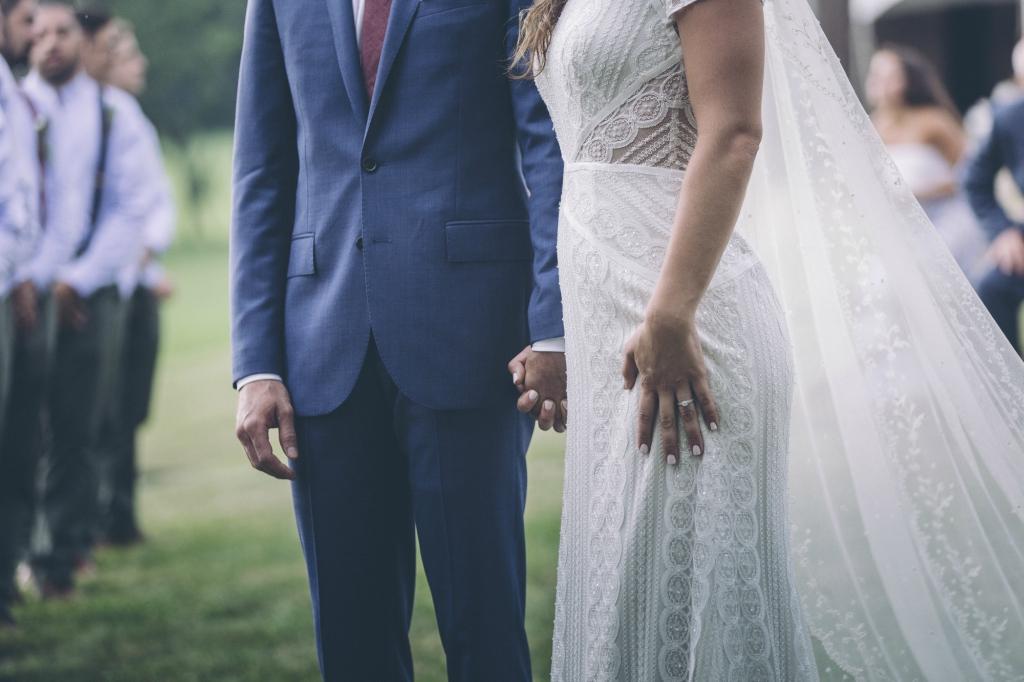 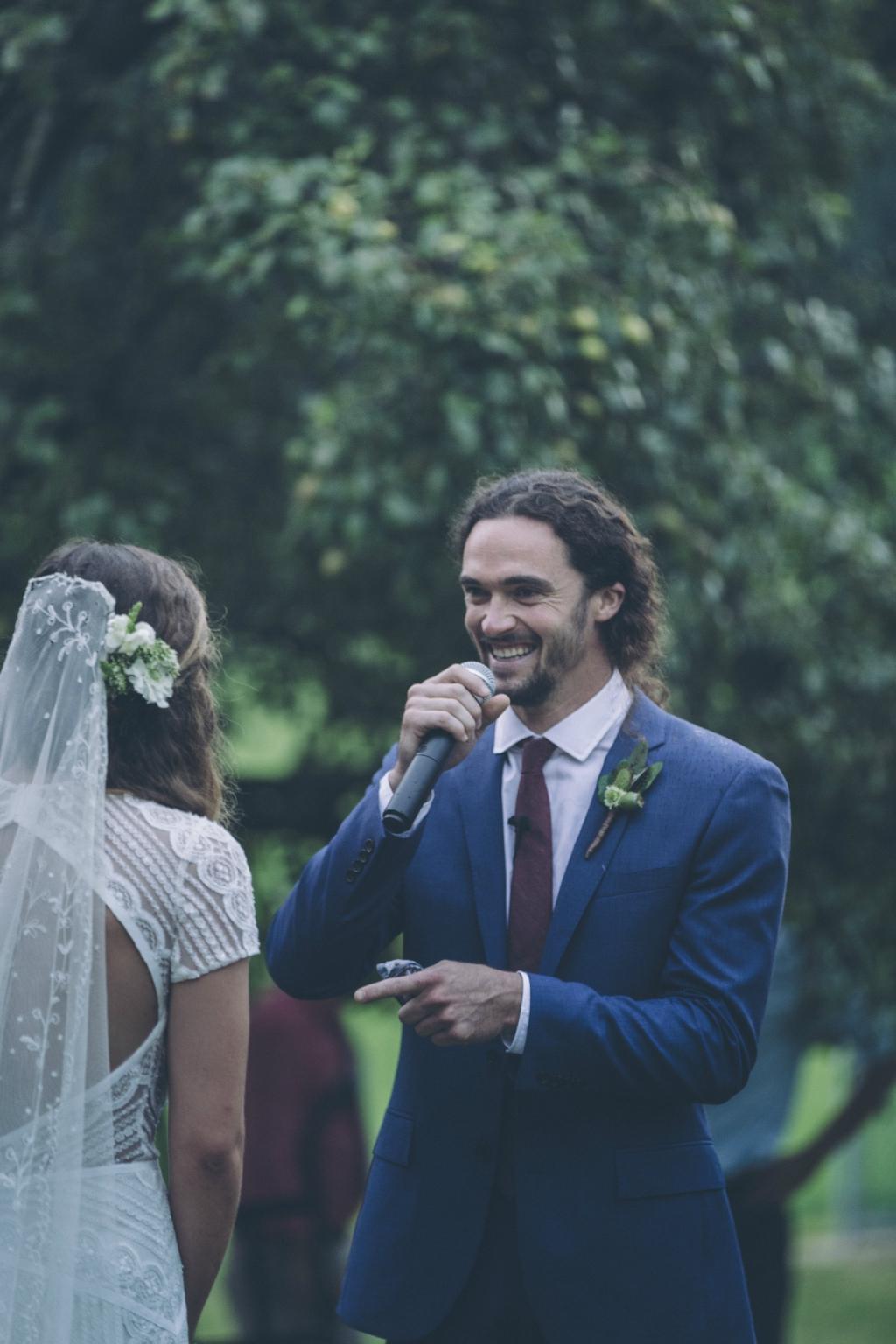 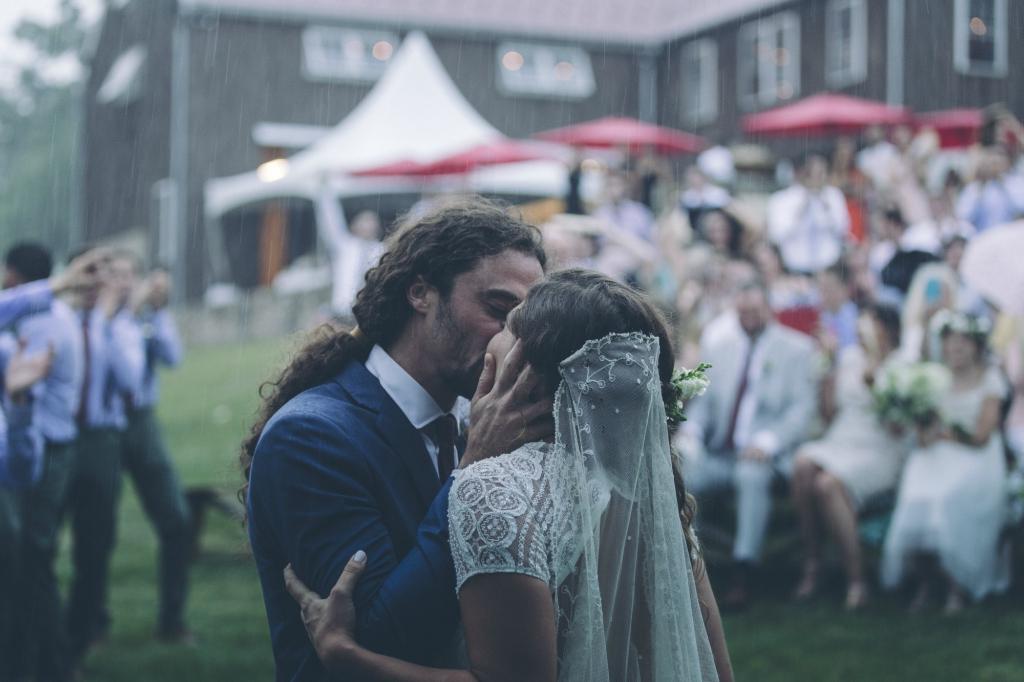 “By far the best moment was when the rain came. I refused to look at the weather all week because we had no plan B for the outdoor ceremony. So all day it was beautiful, with no signs of rain! I had no idea it was coming and it came at the exact moment we kissed. To run in the rain with 200 of your favorite people is the most unbelievable feeling. I had my grandmothers veil on so it was as if her and my other family members who are gone were right there with us. To see everyone’s face after the rain had stopped and we had all cooled off was incredible. We were all smiling and laughing non stop until the end of the night. The rain set the tone for the night. Also second best part, we had a waffles and ice cream truck for dessert. It. Was. The. Best! (Nina’s Waffles).” 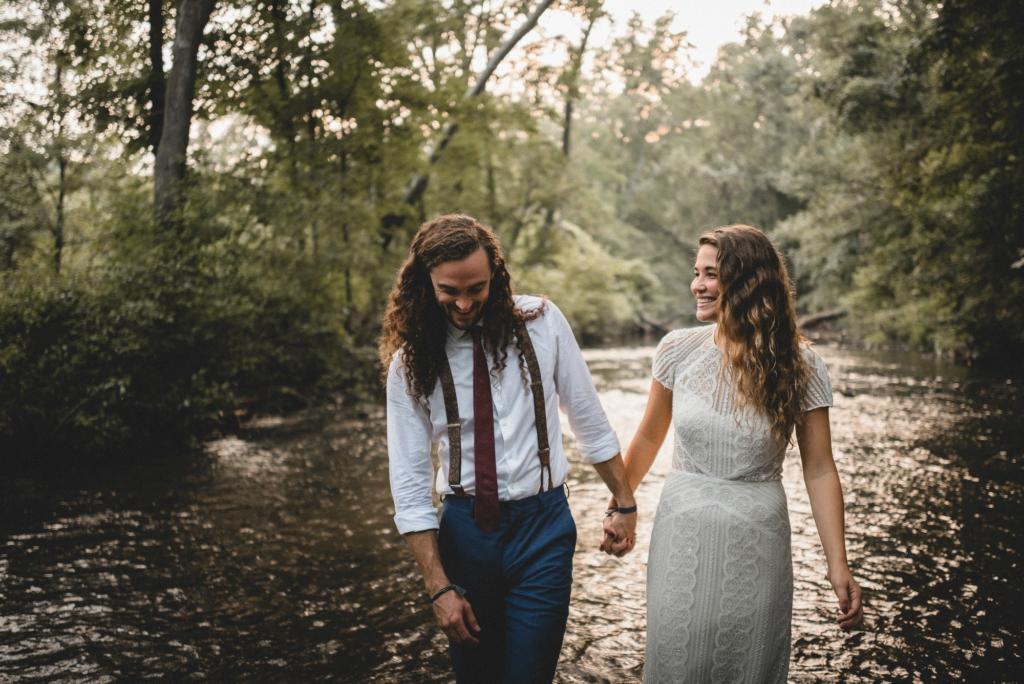 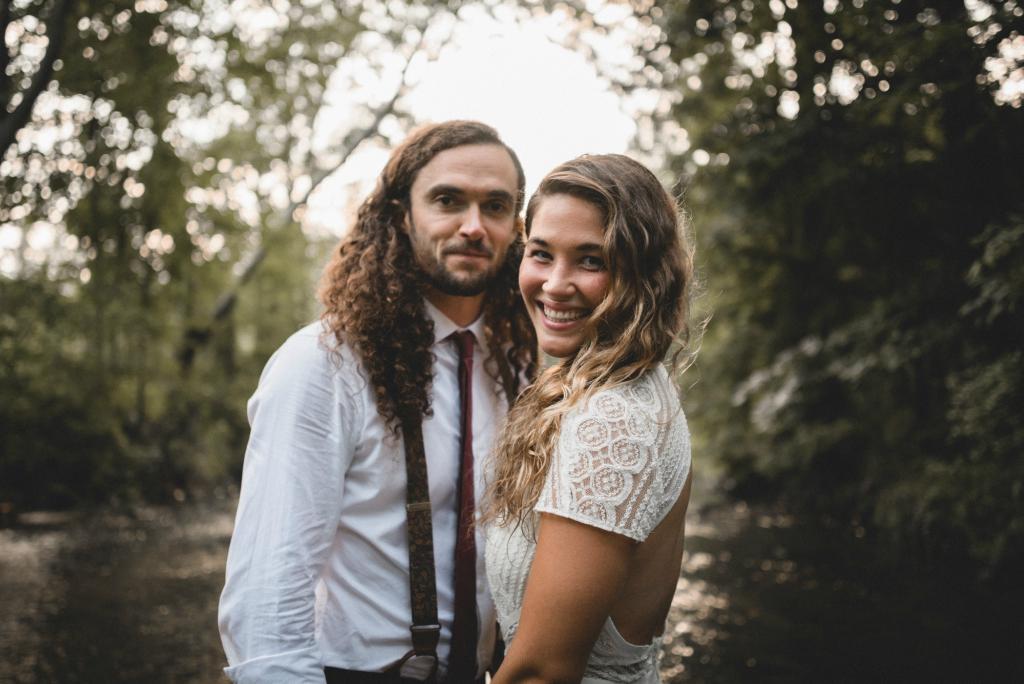 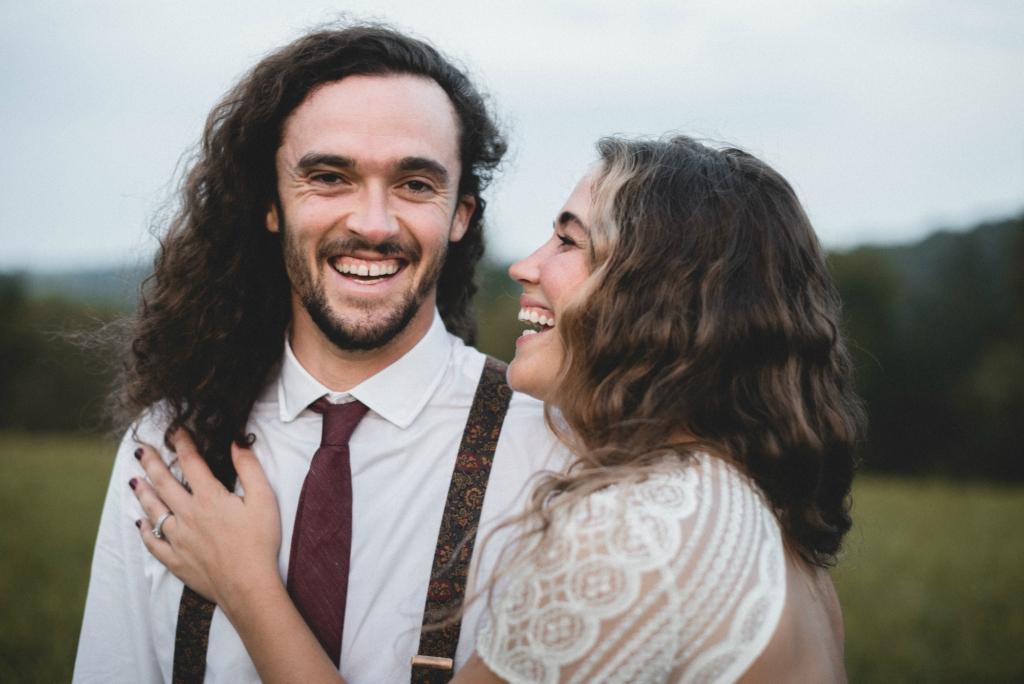 “Planning the wedding was a lot of work because we were on a super tight budget, but we had so many close friends and family members who are super creative and talented that it ended up being a dream. A friend of ours builds and then rents farm tables (@holmespuntablerentals), my best friend does macrame so she made all the runners for the farm tables (Shop Honeydoo), my maid of honor is a calligrapher, so she made all the signs, and all the invites, and all the cards (LetHerLetter) and lastly my aunt is a florist, so she did the most amazing job with the arrangements, the crates that went down the isle and the arbor that we stood under. (The arbor and all the benches for the ceremony were also made by our friend Kevin from (@holmespuntablerentals). We made our own dream catchers that were hung around the barn, we strung our own lights around the barn, and we added fabric inside the barn to make it feel light and airy. It was a lot of work like I said, but it all came together with the help of my friends!” 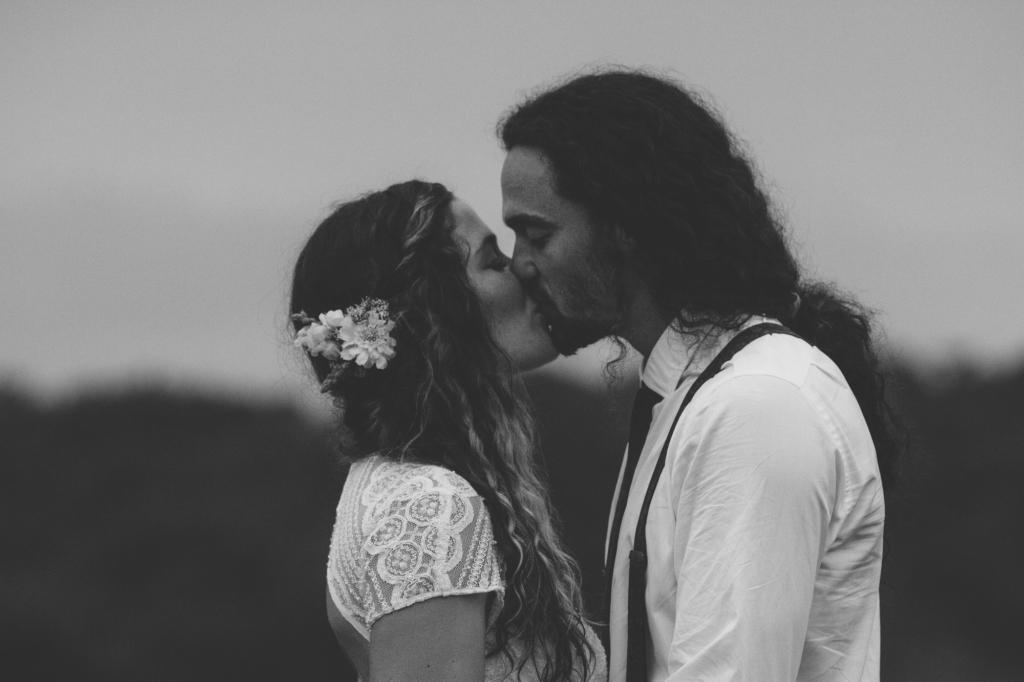 “Luke and I wanted something simple, fun and out-doorsy. We loved the property and the way the barn was surrounded by nature. It made it feel like it was home for us. The idea of bringing all of our resources together was perfect. I have super talented friends, and I blended a mix of their style, and what I love and botta-boom! Our boho, rustic, barn style wedding came about!”