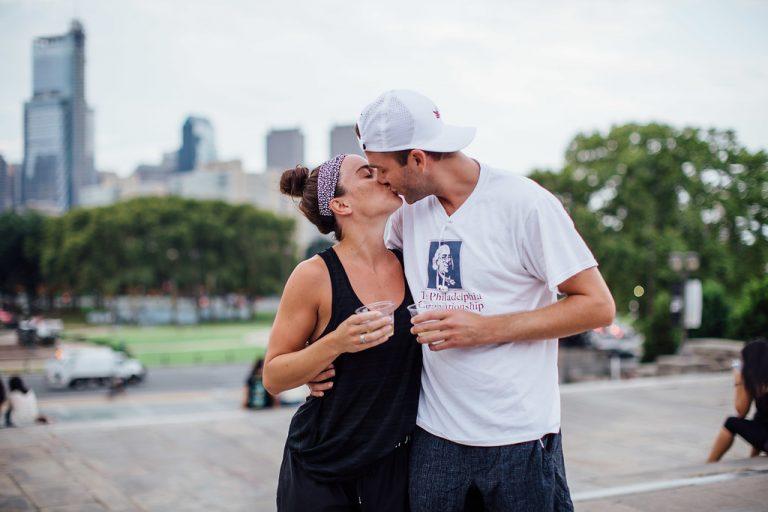 Tim and Cara crossed paths as athletes in high school, but it wasn’t until years later that they truly connected and fell in love.  Alison Leigh, a close friend of the couple captured every beautiful moment that unfolded on this joyous day.  With the lovely Philadelphia skyline as their backdrop, and a local crowd as their audience, Tim asked Cara to marry him!  She said yes (of course!) and they popped some champagne to celebrate the occasion.  This couple’s tear-jerking proposal, and love story are ready to be adored below.

From the Photographer, Alison Leigh: “Tim took his fiancé for a run and planned to stop at the museum along the way. I was already waiting for Tim to meet me at the top of the stairs for him to grab the ring I was carrying in my pocket. Before signaling Cara to walk up the stairs, Tim planned to already be down on one knee faking an injury. Cara was completely thrown off and totally surprised. Once she said ‘Yes’ the two started crying in each others arms while sharing that moment with an audience circled around clapping, whistling and cheering in celebration!! It was truly beautiful, everyone was in complete awe!” 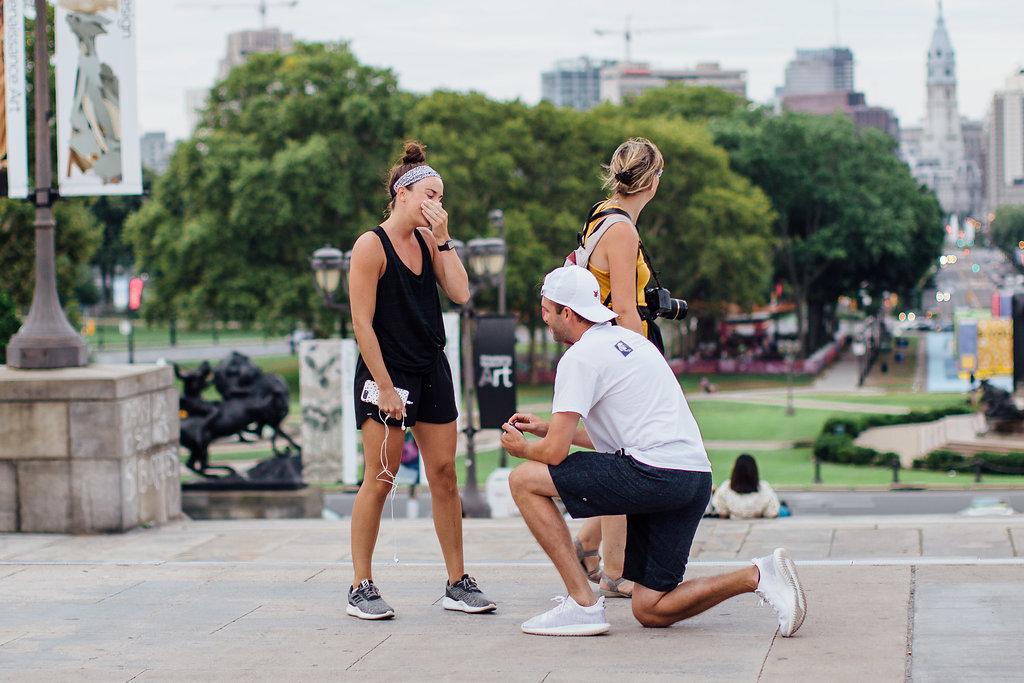 “About three years ago I knew I wanted to marry Cara but I wanted to make sure the timing was right with all that was happening in our busy personal lives as well as our big family’s lives. I always wanted to do it with some type of Philly backdrop so I landed on the idea of the art museum for a couple reasons. Cara and I live about 4 blocks from the art museum so we often walked there to sit and chat or would do work-outs on the steps Friday nights or Saturday mornings – it seemed perfect. Cara stays at the bottom for her work-outs while I run up and down. My plan was to fake an injury at the top, call her to come up and help me as I went from a faked bad ankle on all fours to the bend of one knee…it couldn’t have worked out any better.” 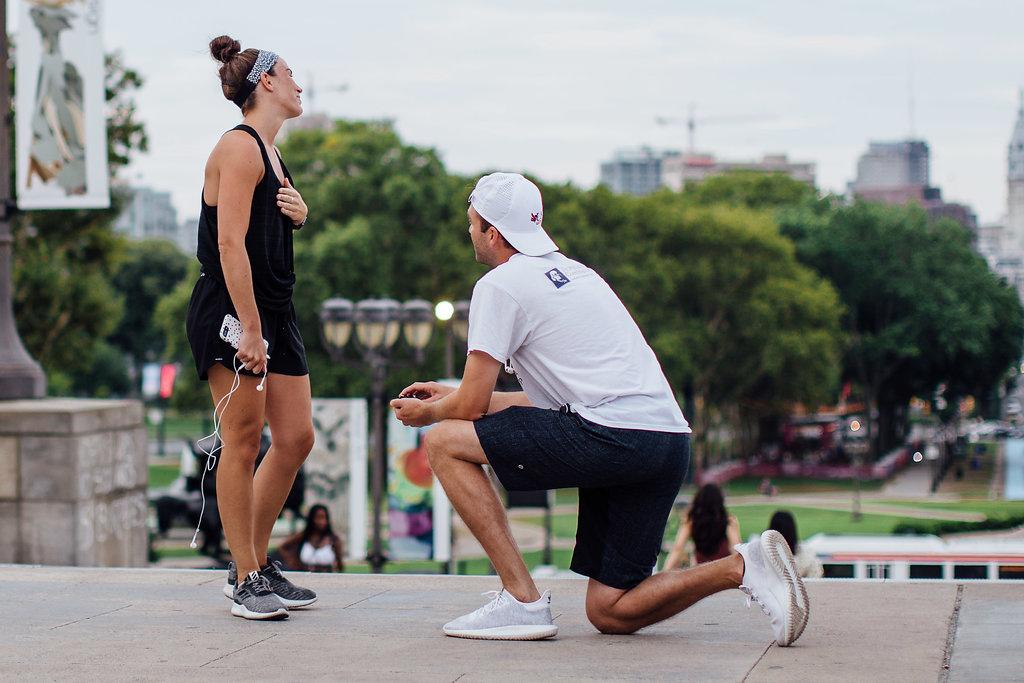 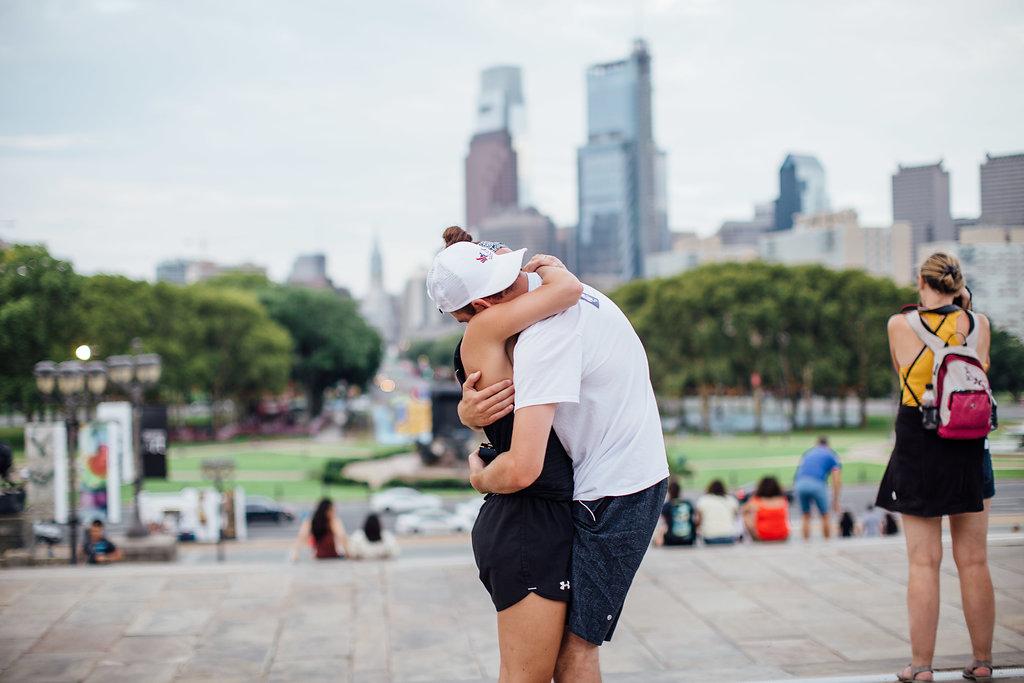 “Alison has been a great friend of mine for many years and since she has gotten into the photography business, it was an easy decision to have her capture such an important moment for us.  I say that not because she is a dear friend but because of her incredible ability behind a lens. Cara and I were very lucky to not only have Ali capture an unforgettable time of our lives but also to share that moment with such a true friend.”

“I really believed he was hurt when he called! When I got to the top of the stairs my eyes were locked in on Tim and I started frantically asking him what he had hurt, when I could see him start to rearrange his footing so he was down on one knee. As soon as he started to speak I realized what was happening and I was in complete shock.  I had dreamed of that moment with him for 5 years and I was so shocked that we were there…I immediately hugged him for what felt like an hour. I did not want to let go.” 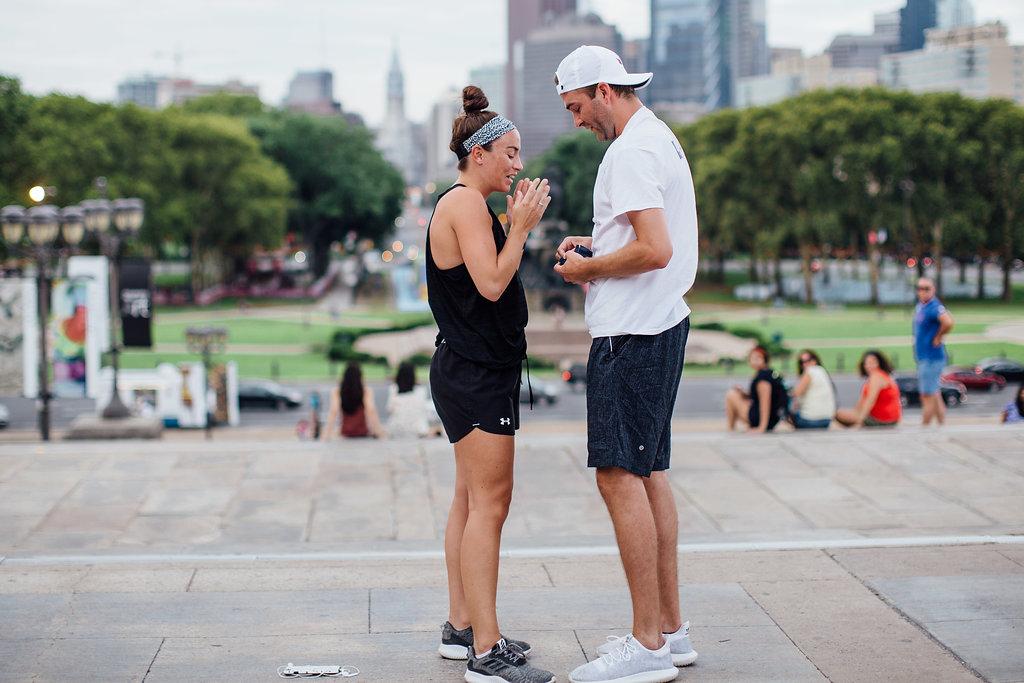 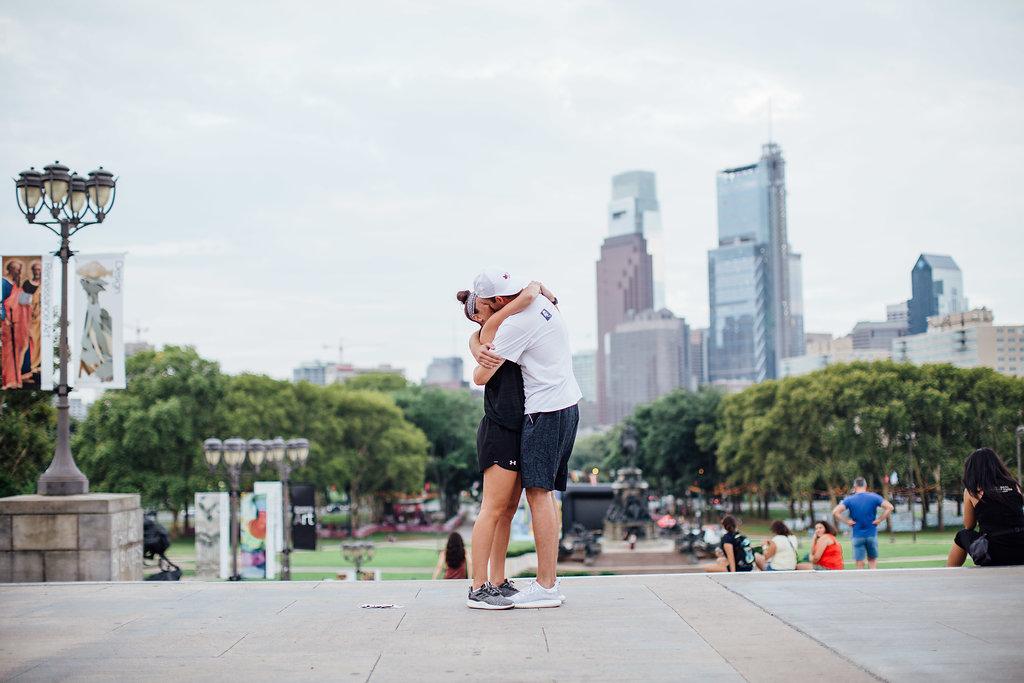 “I played soccer against Tim for a few years in grade school…he was the really cute boy on the other team that all the girls were so excited to play. We had become social media friends in high school because of that connection but never really had any significant interaction…other than a few close games on the soccer field.

On NYE of 2012/2013, we were both at a large Philly New Years party at the Piazza with at least 2,000 other people. We happened to be in the same little corner and both spotted each other. After a few awkward “I know you” stares,  Tim came over to say hello….we caught up all night and have been inseparable ever since.” 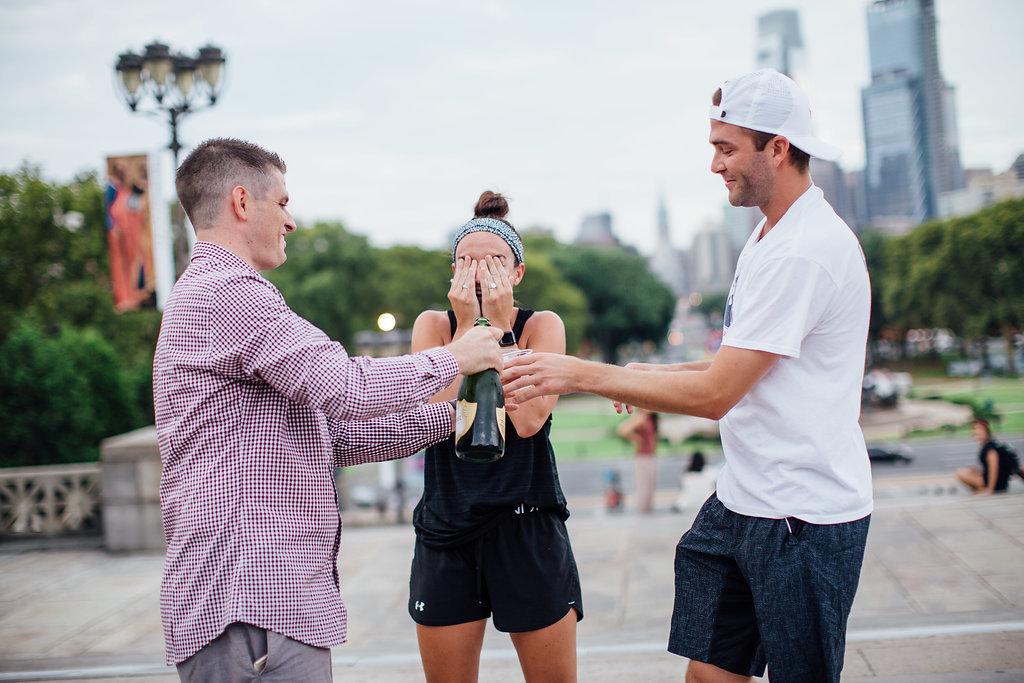 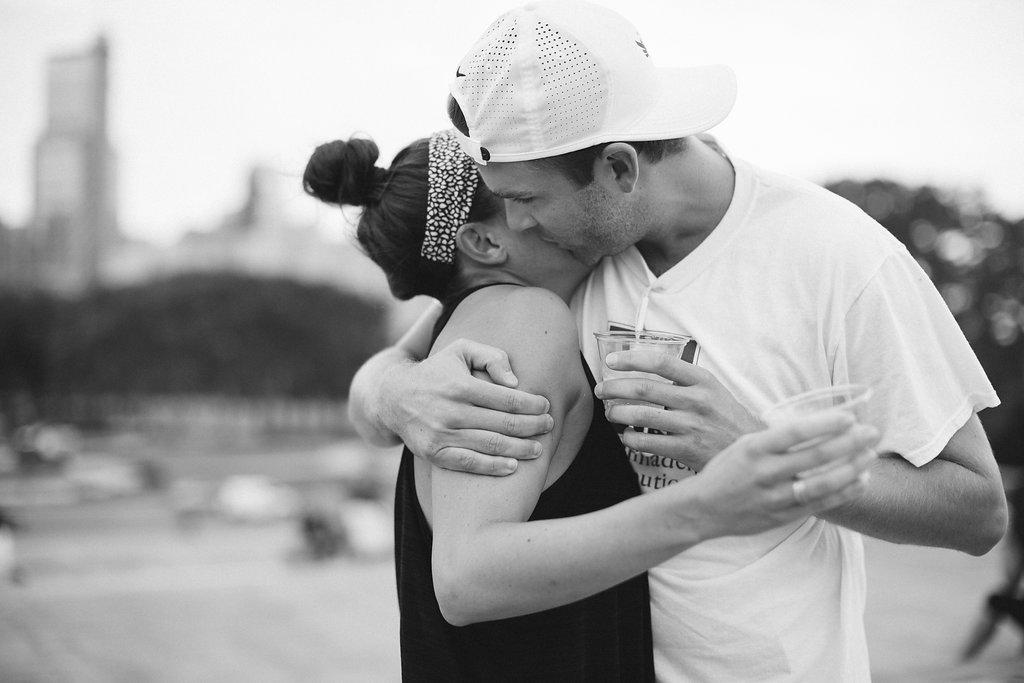 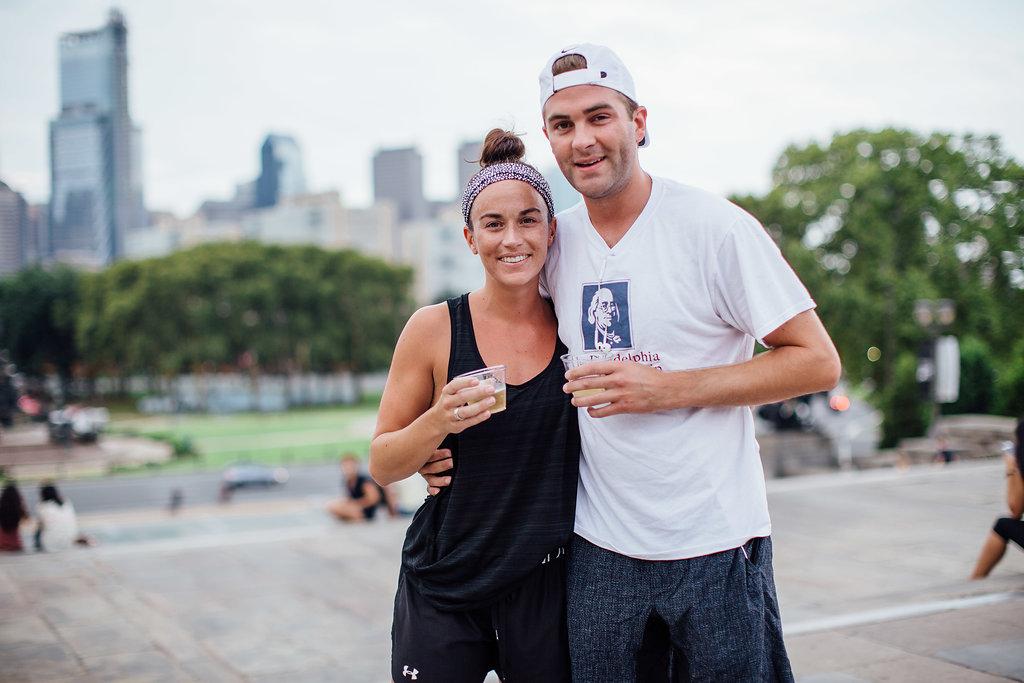 “We started wedding planning almost immediately. We wanted to get married on NYE weekend because that weekend is so special to us. I also really wanted to get the big vendors booked and ready so that I could really enjoy the engagement period. Tim and I have worked together on everything and have enjoyed the process so far!”