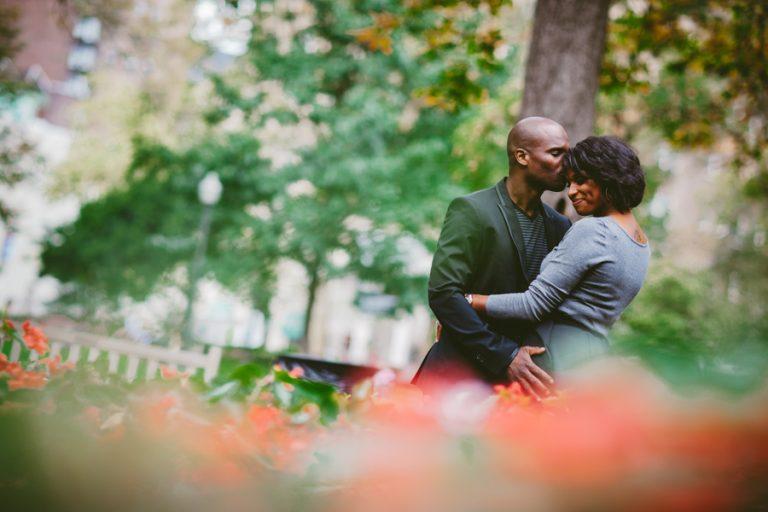 Maria A. Garth Photography created the perfect pictorial story of a charming couple in the city of Philadelphia.  Kina and Lance’s beautiful connection is vibrant in every way, and their amazing vibes can be felt through these lovely images of their engagement session.  This couple has been together for 14 years, burgeoning their love as college sweethearts.  I don’t know about you. . . but their love story is absolutely sweet (read more below)!  Dive into this brimming romance, as this lively couple dances through Center City District sharing their love vividly for all to see! 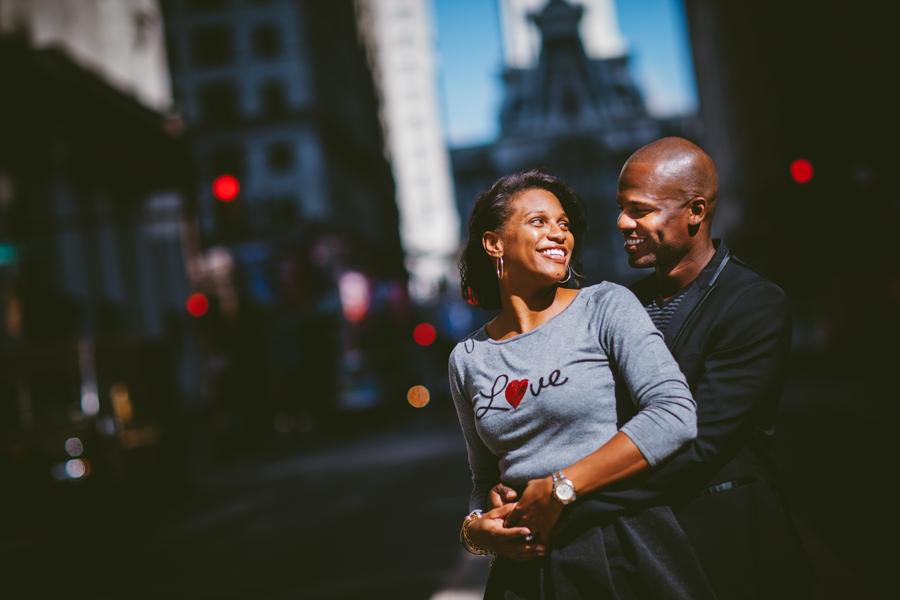 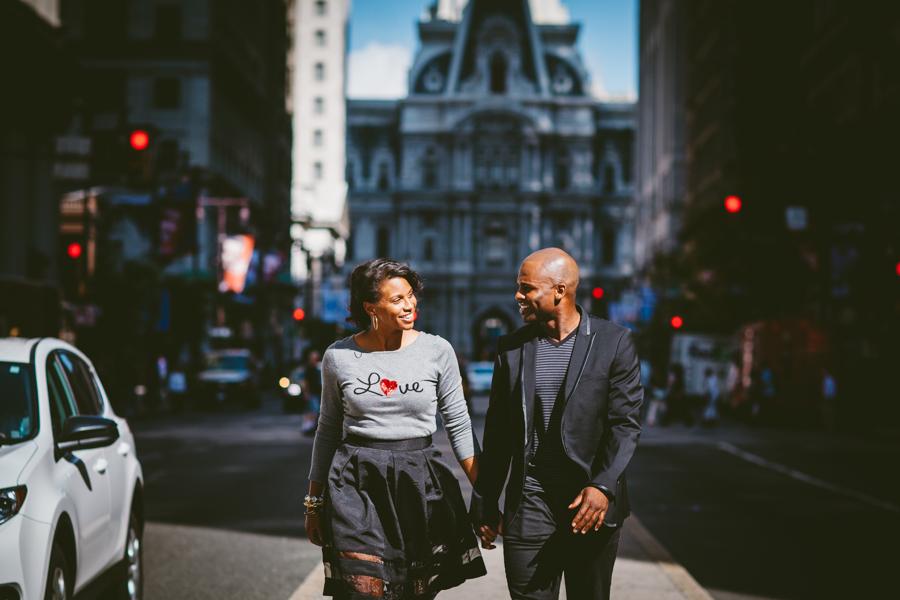 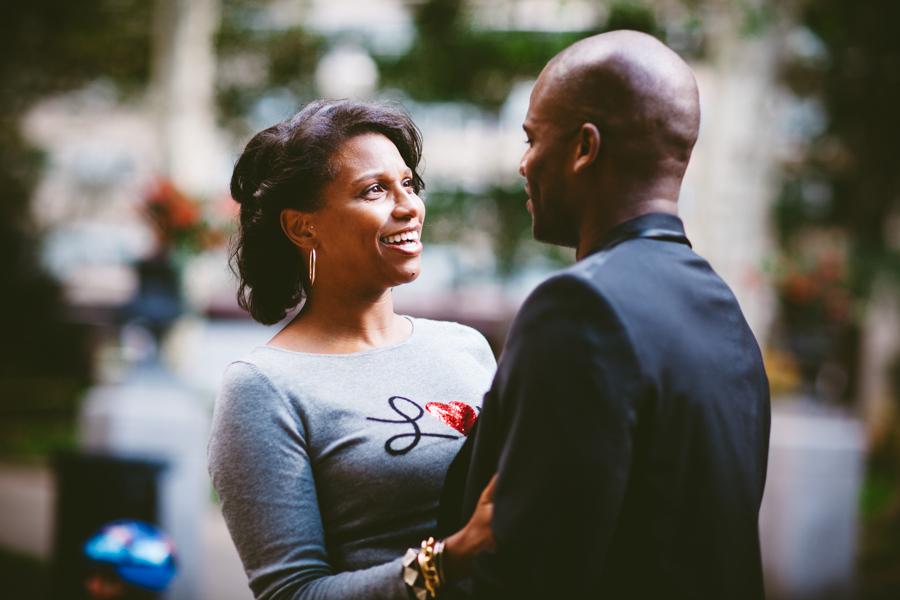 “Lance and I are college sweethearts who met at West Virginia University, and began dating 14 years ago. Lance and I were both athletes in college. He was able to live his dream and play professionally since 2004 after graduating. He has played in the NFL, NFL Europe and Canada. He spent the last 8 years in Canada, coming home 5-6 months for the off-season.“

“I love the strong man he is with a gentle heart. He protects me but also allows me to be the strong  and independent woman I am.” 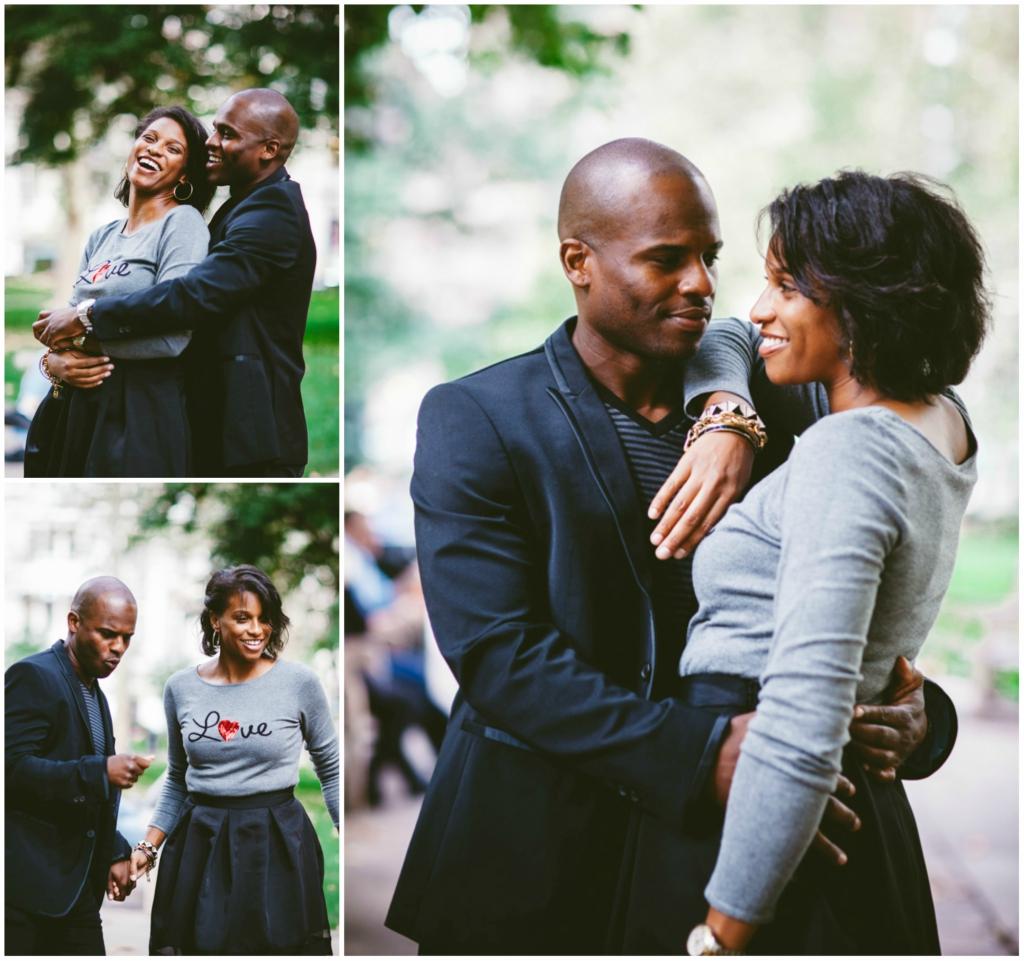 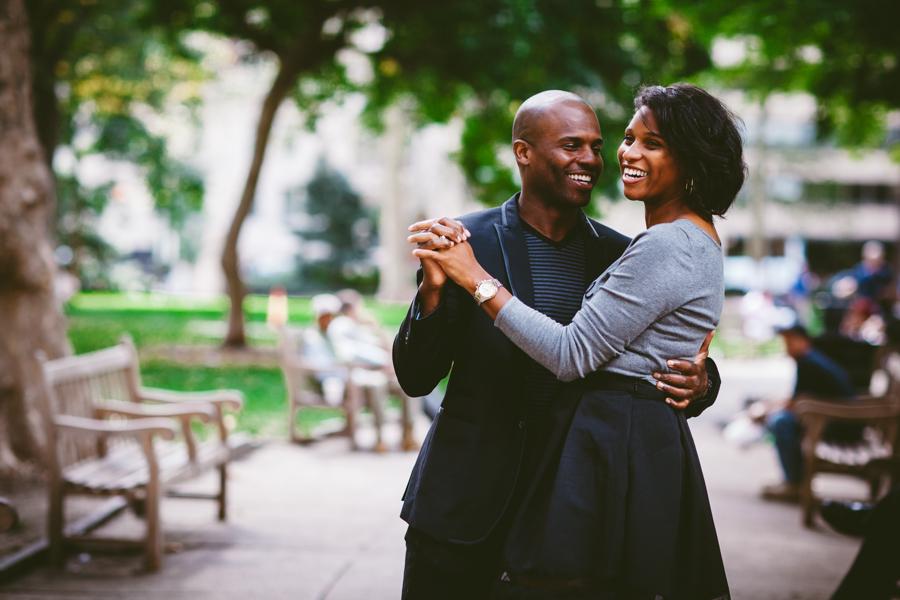 “Our engagement was really special. Our son Kalen (who was 5 at the time) and Lance had been ring shopping together, and picked out a stunner. After asking my dad for my hand in marriage, Christmas day 2010 was a day I will never forget. After exchanging gifts at home, we headed over to my parents where all of my family visits for Christmas. After dinner everyone was in the kitchen about to have dessert. My aunt was taking pictures of the kids, and we were just hanging out and winding down. Lance snuck away, headed to the car, and returned with a Louis Vuitton boxed that he then handed to me. I wasn’t sure who I was supposed to be handing it to. But he gave me a nod letting me know it was for me. I opened it and was completely shocked to find a new purse. As the family crowded closer to see the bag, he encourage me to checked it out closer. It was beautiful. I unzipped it and started taking the stuffing out and noticed a small box. I suddenly began to sweat. How could this be? He just gave me a Louis Vuitton purse. This can’t be a ring!? He continued to nudge me and encourage me to open it. I opened it and OH MY GOD! It was the moment I dreamed of for what felt like a lifetime. He dropped down on one knee and asked me to marry him. Our son was cheering him on (literally!). It was great. I’ll never forget it.” 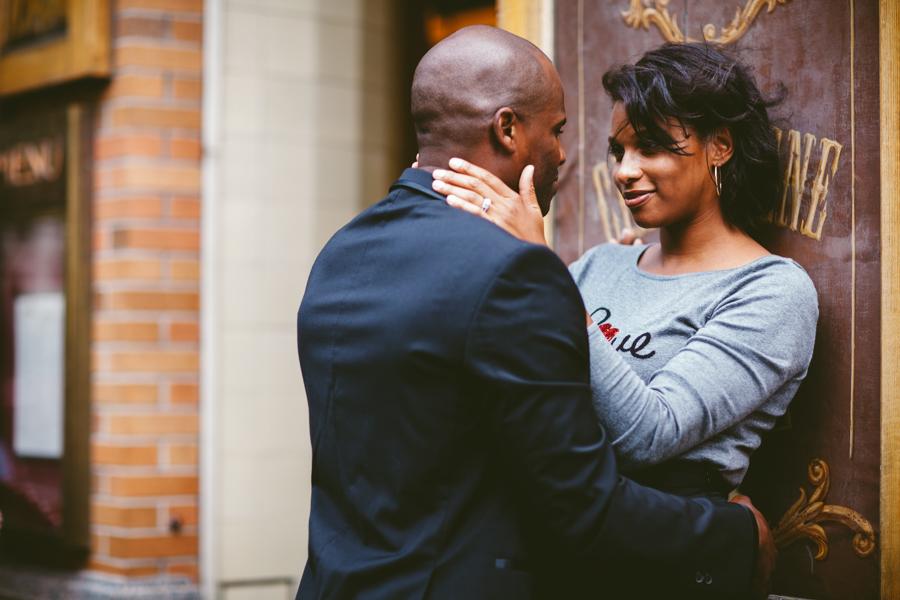 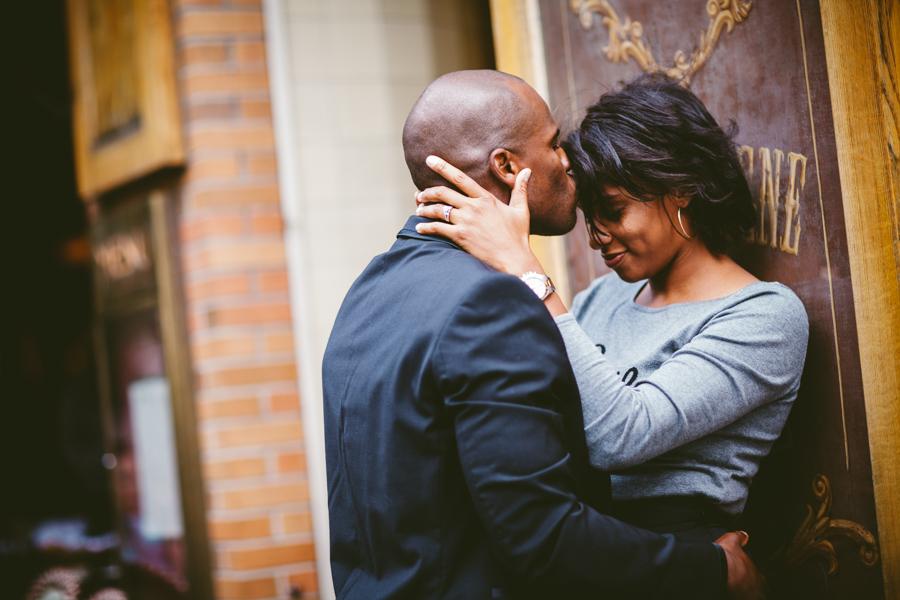 “After a 4 year engagement, we finally decided to tie the knot. The timing was perfect for us. A year ago when we started planning, LANCE retired and moved home (our home in Delaware) permanently from playing in Canada (Saskatchewan Roughriders). We have two children who played major parts in the wedding. Our son Kalen (11) was the best man and our daughter LaKi (5) was the flower girl. For 9 months our daughter had been dreading the kiss at the end of the ceremony! It’s all she could think about. At one point she even second guessed wanting to be the flower girl because she didn’t think she could handle seeing the kiss. Drama Queen!
After such a long courtship, all 200 guests were ecstatic about our finally tying the knot. We got married on December 6, 2014 at the Church of Christ in King of Prussia, PA and had a beautiful reception at the Valley Forge Casino. The bridal party consisted of 10 of our closest friends. And every detail was planned and executed beautifully. I planned the entire night from the cake to the hand-painted favors (which took me 3 months to complete). The invitations were a labor of love as well. My childhood friend designed them and I hand painted the gold accents on each one.
The reception was in the two level beautifully lit Waterford room with amber up-lighting and candle lit tables. It was seasonally decorated with pine cones, balsam fir, and lots of sparkle. I had an opportunity to dance with the most important men in my life, my father, son and my new husband. I was also serenaded by my sorority sisters, and we finished the night with a West Virginia favorite, Country Roads.
Our vendors did a tremendous job executing and capturing the night.” 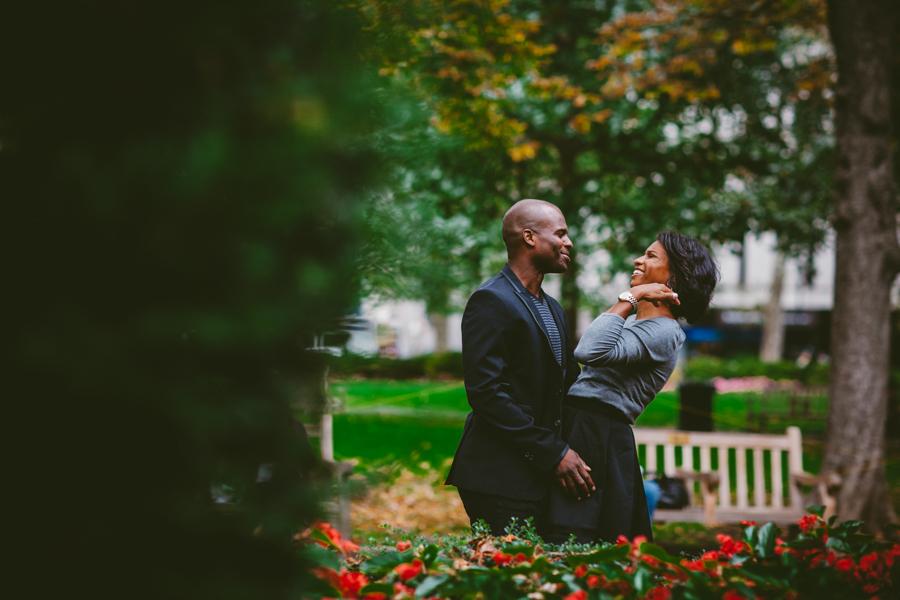 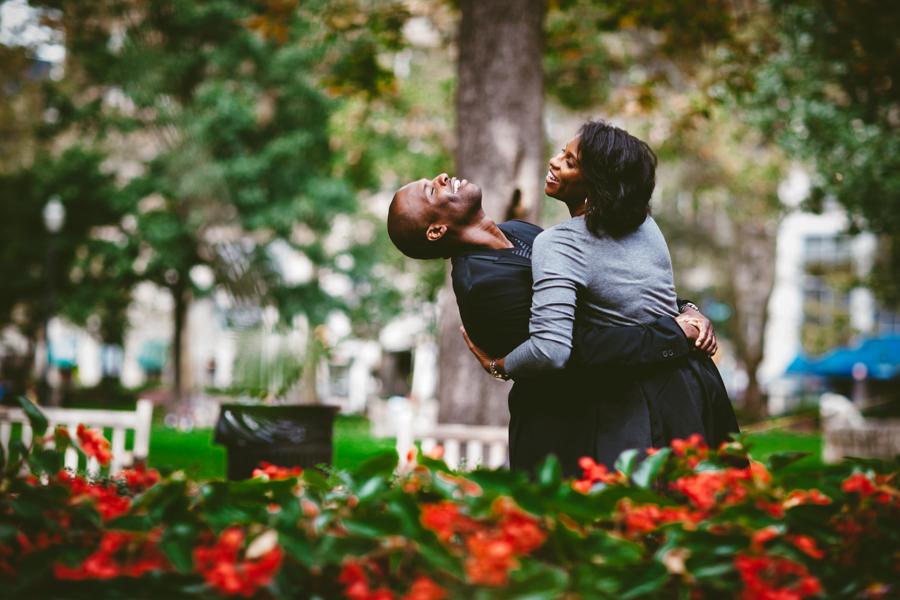 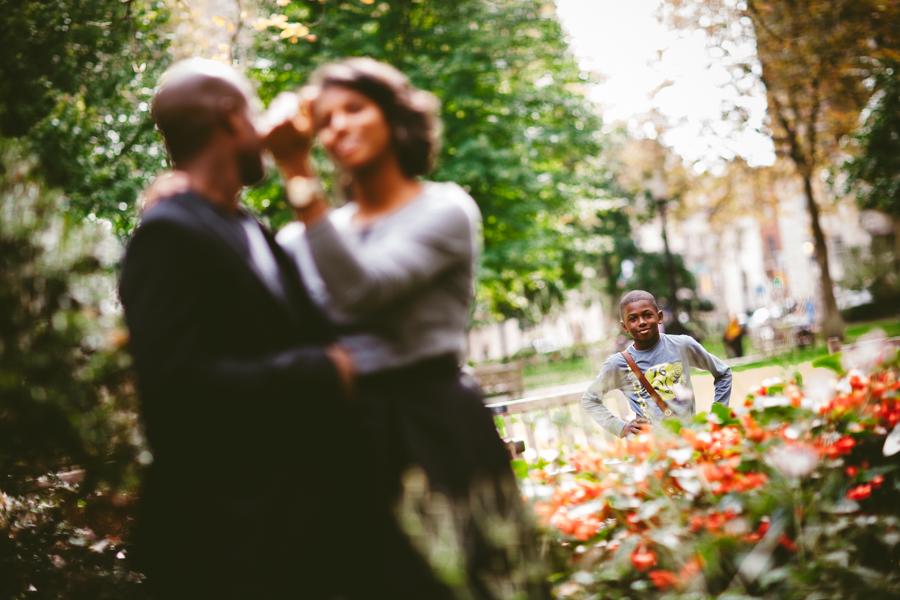 “I really wanted my engagement photos capture our love for each other. I especially wanted to capture the feeling that no matter where we were or who was around, we know how to have a good time. Being in the middle of center city, dancing in the fountain, kissing in front of the restaurant were all beautiful moments that were captured. It was so perfect.” 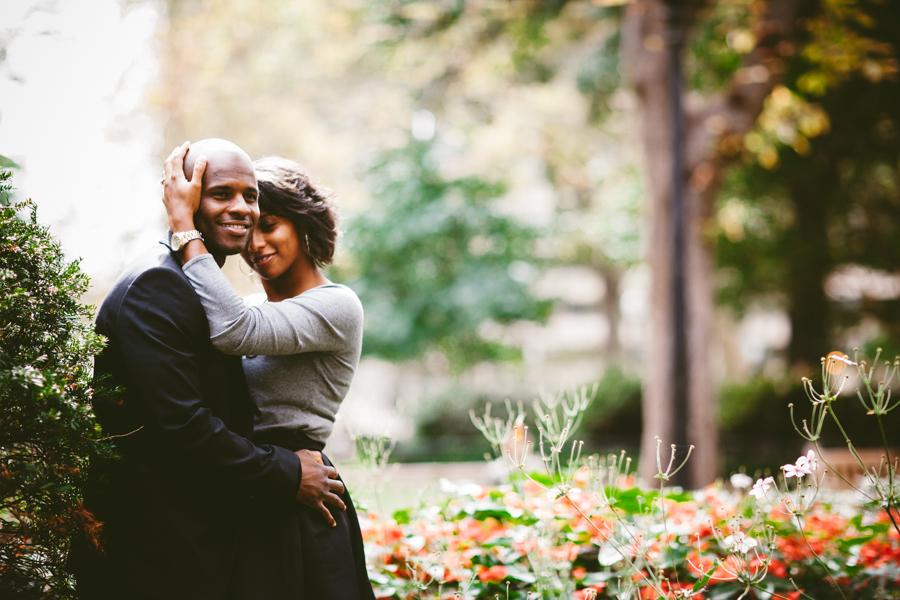 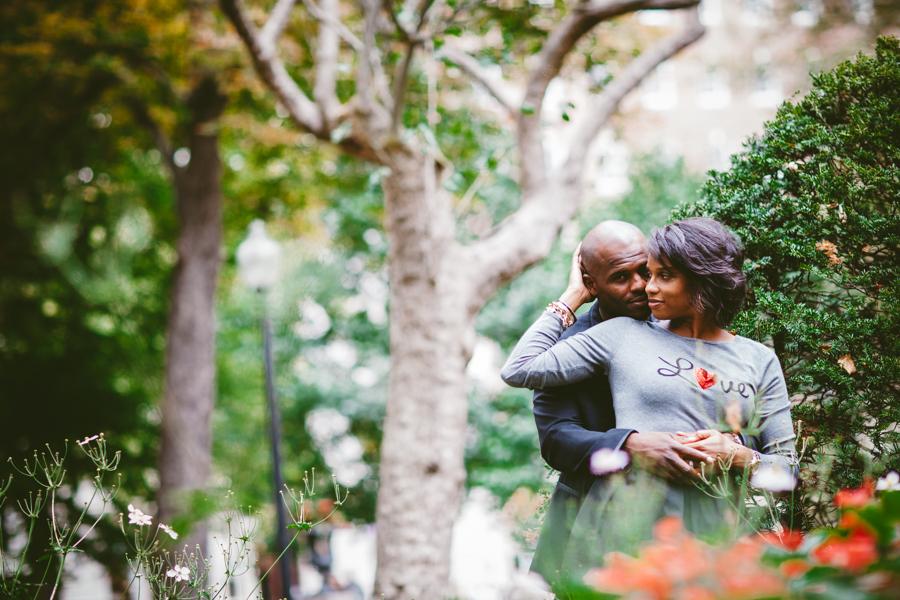 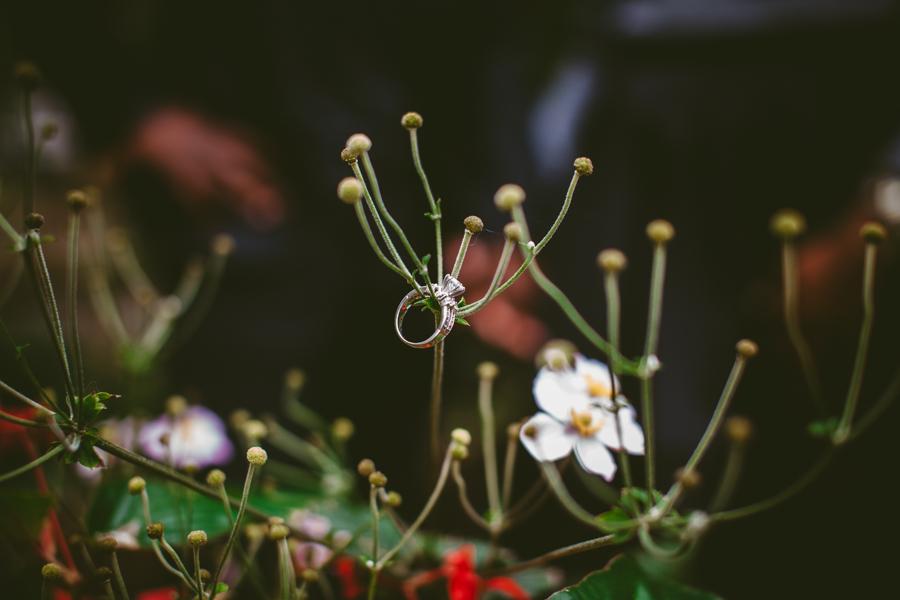 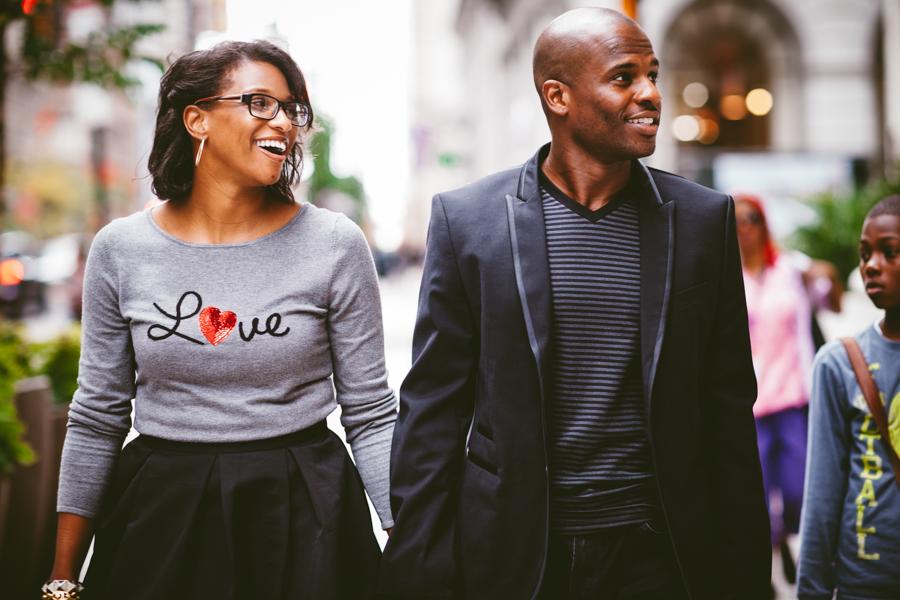 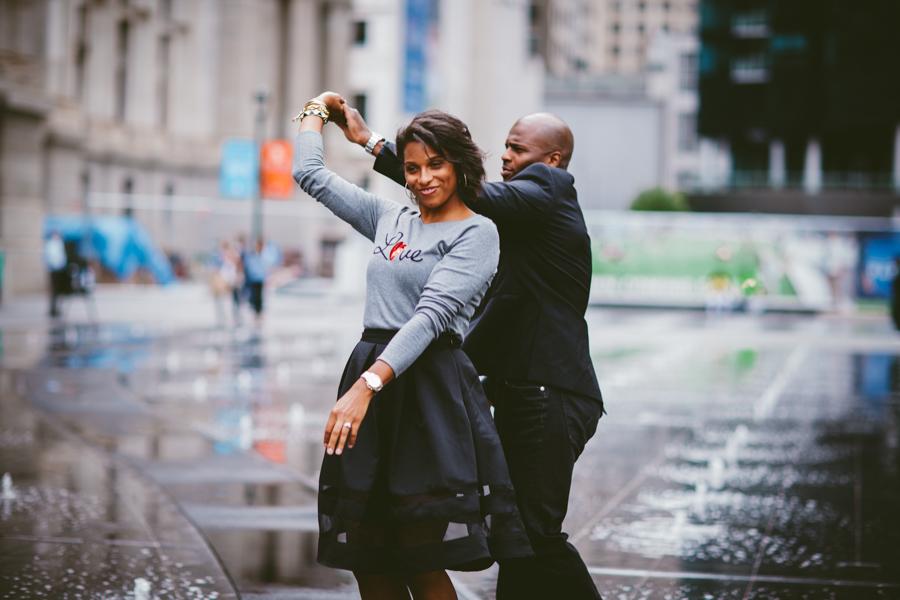 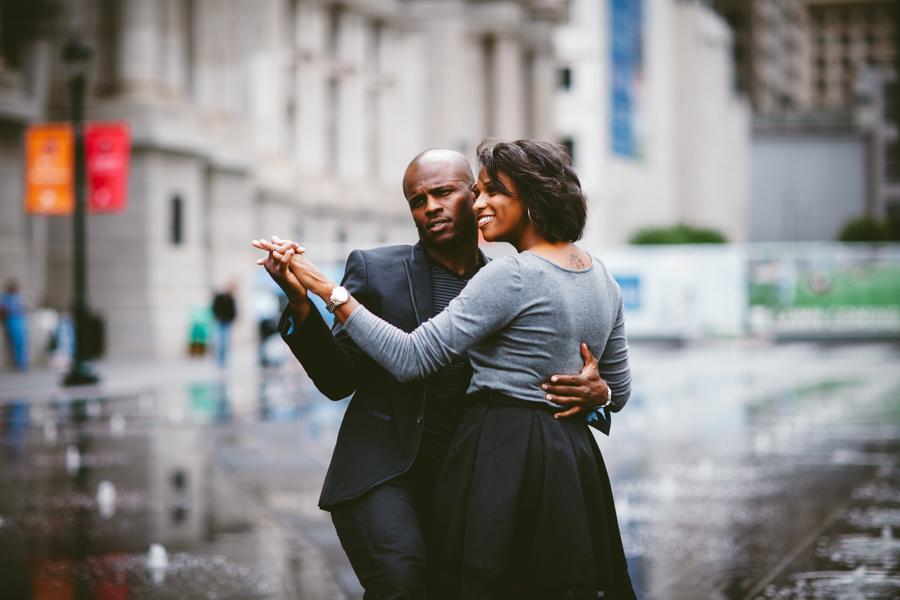 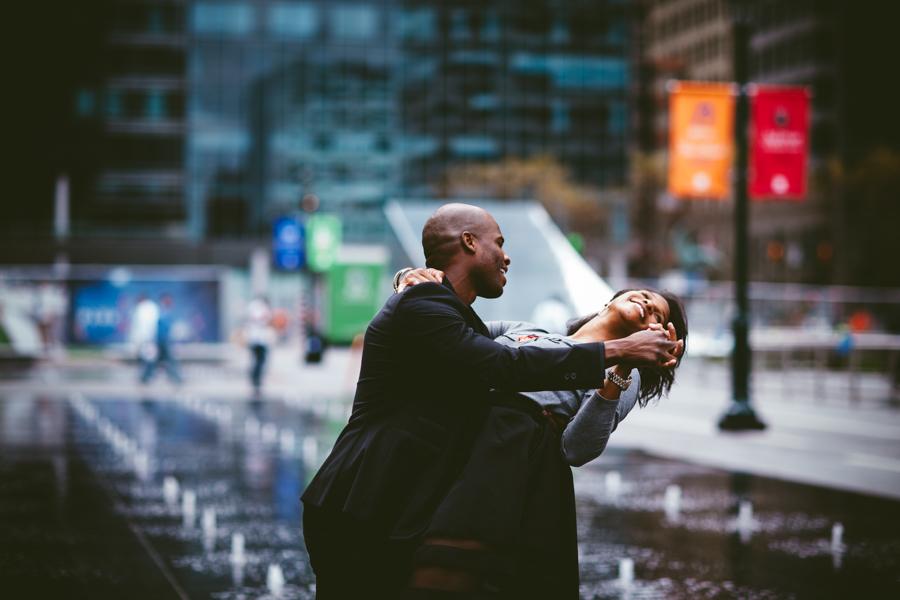 “Our engagement photographer was a lot of fun. We met her at a time when she was just starting her own business. She was fun and so are we so it was the perfect match. She was willing to push the envelope to get great shots which we admired and totally appreciated.”