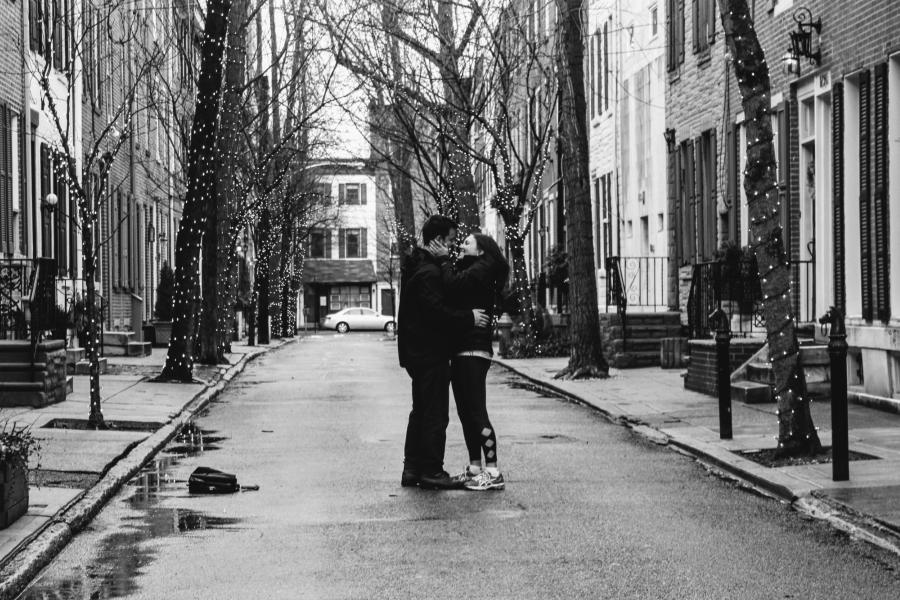 We couldn’t resist falling for this couple’s sweet Philly proposal!  Lauren and Casey’s love story surrounds their admiration for Philadelphia and one of their favorite local spots.  We think Addison Street is one of the most beautiful streets in Philly for proposal photos and this couple has cherished many moments on this special block.  Between Casey’s surprise reveal to the evening with their closest family and friends, this proposal was pretty much perfect and thoughtful from beginning to end.  Keep scrolling to see how it all played out and to hear how their love story began! 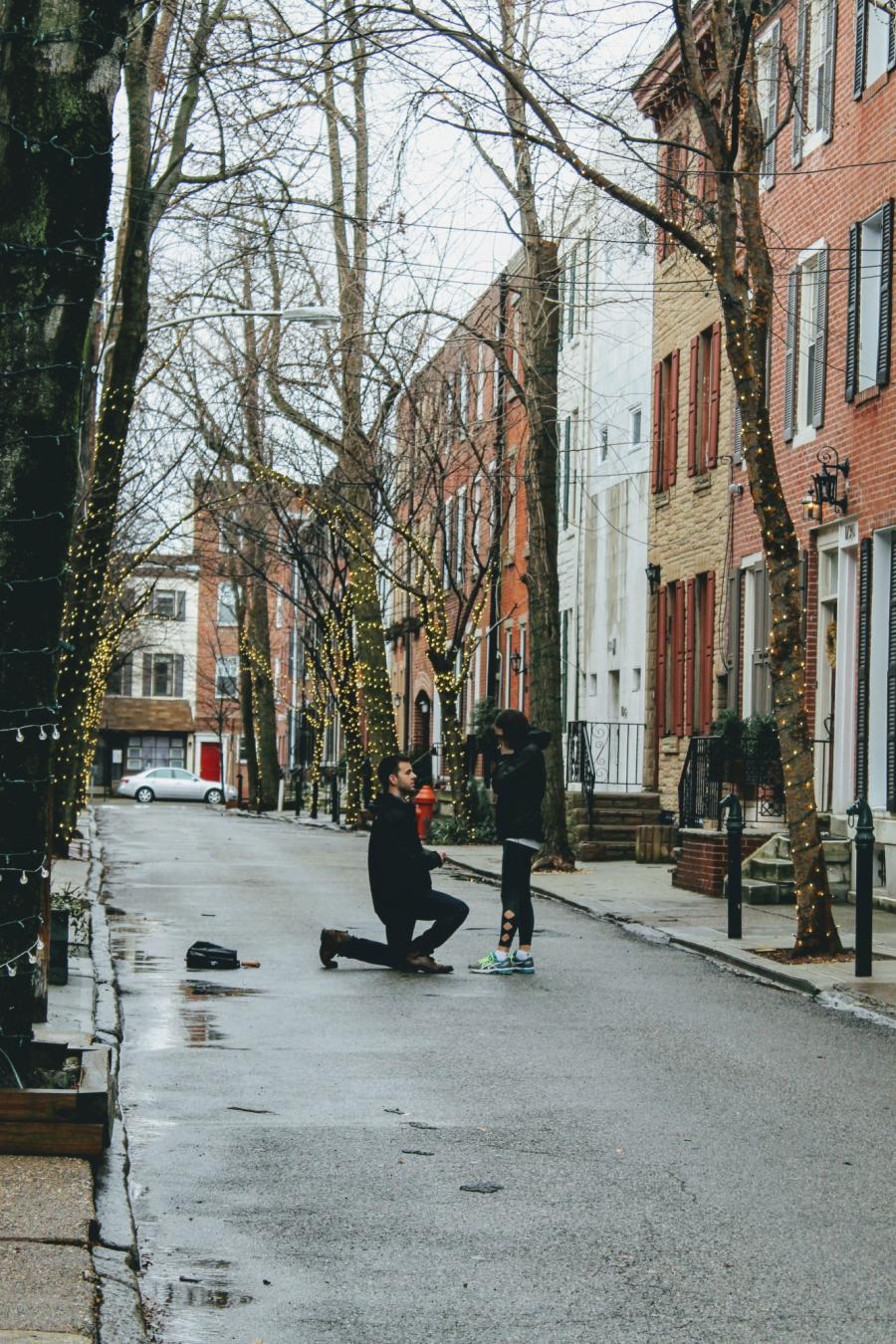 “It was quite a month of February for these two Philly lovebirds! Casey and Lauren both grew up in the suburbs of Philadelphia. They attended high school together in Chester County and were both lifelong Eagles fans. Upon graduating college (Casey from Penn State and Lauren from Bucknell), they found their way back to the city of brotherly love and were on top of the world when the Eagles won the Superbowl this year. Little did Lauren know, the Eagles weren’t the only ones getting a ring that month.

Still riding on the high of the Eagles Superbowl victory and parade the week prior, Lauren, who is currently in medical school, had just finished up her surgery rotation and she and Casey had planned a trip to New York City to visit friends from college. Or so she thought.

On that rainy Friday afternoon as they prepared to make their way to the train station, Casey’s roommate JD called to say he had locked himself out of the apartment. Casey suggested they quickly stop at the apartment, and then JD could drive them to the train station. Lauren, who is a stickler for being on time and sticking to the plan, was frustrated at the unforeseen delay but ultimately agreed. A few blocks away from the apartment, Casey mentioned that he wanted to show her something on the way. Still focused on getting to the train station on time, Lauren didn’t quite pay any attention as he began to lead her down Addison Street in Rittenhouse Square. This was one of their favorite spots in the city because of its quaint charm, gorgeous homes, and trees that the resident’s string with lights every winter. The pair frequently went out of their way to walk down Addison and had even posed for a few photos there in the snow a few months prior.” 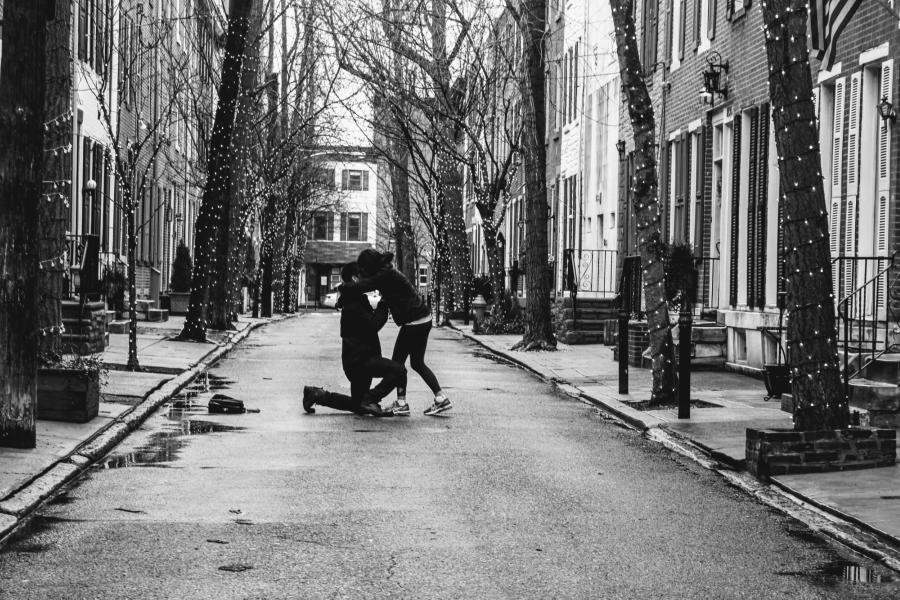 “As he led Lauren down the street, Casey said,  “I know you had been looking forward to our trip this weekend, but I actually had something else in mind.” Stunned, it was at that moment that Lauren realized Addison Street was completely empty, the trees were beautifully lit, and the rain had stopped. Before she knew it, Casey was down on one knee and the rest was a blur.

After she (of course) said yes to the love of her life, he stated that although they would not be going to New York for the weekend, he thought he would bring New York to her. Lauren looked up and her two college roommates Jamie and Nicole were running down Addison Street toward them (they had come in from Connecticut and New York for the special night). After many tears and as things began to sink in a bit, Casey offered that (after Lauren got changed out of her “ugly” running sneakers and leggings) they take a few more photos.” 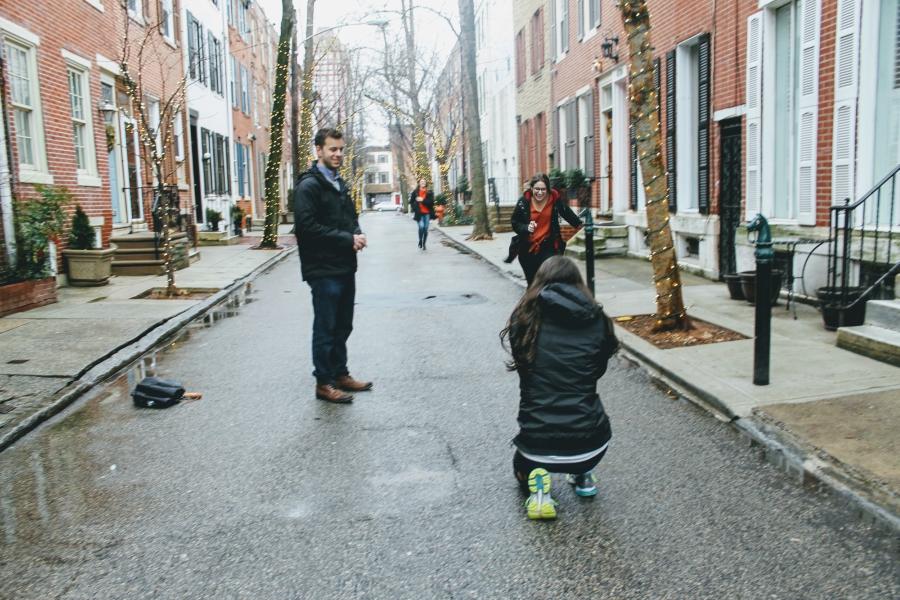 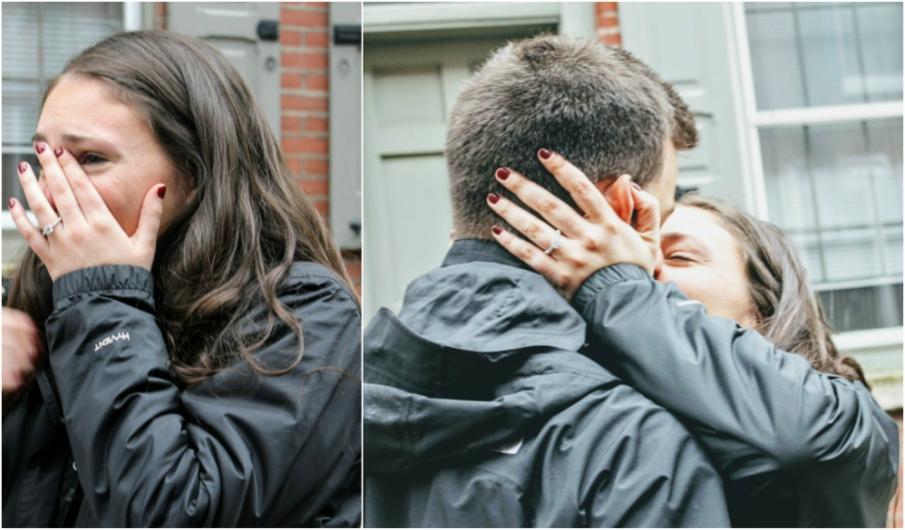 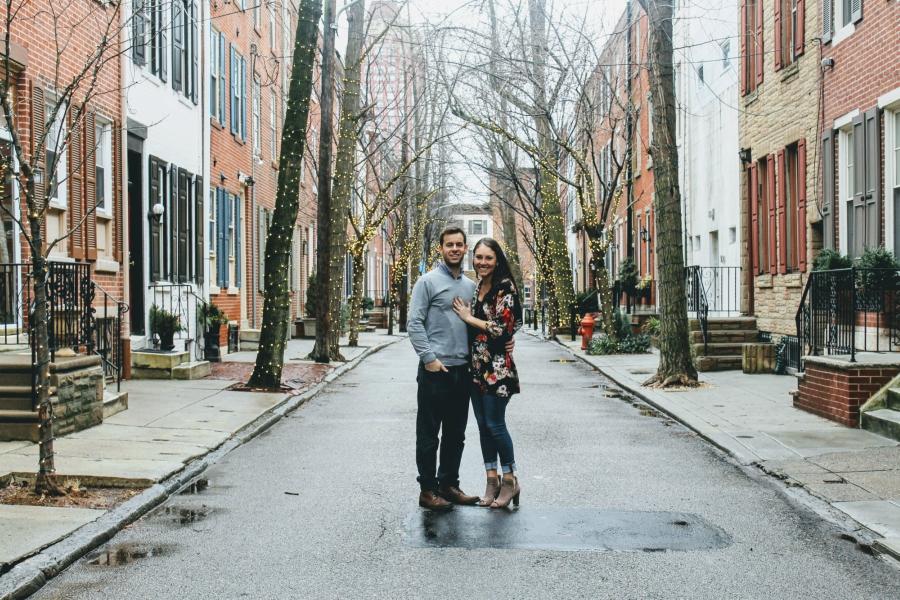 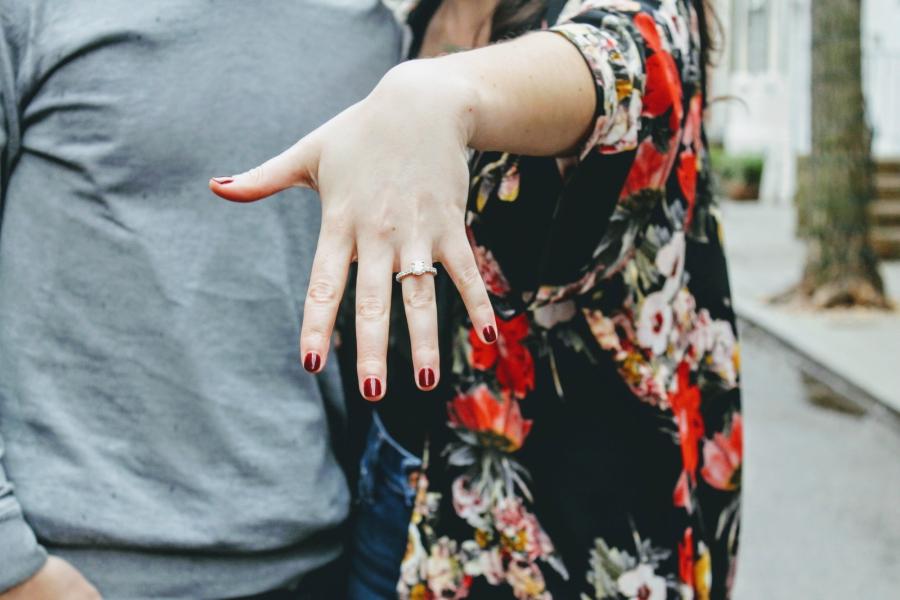 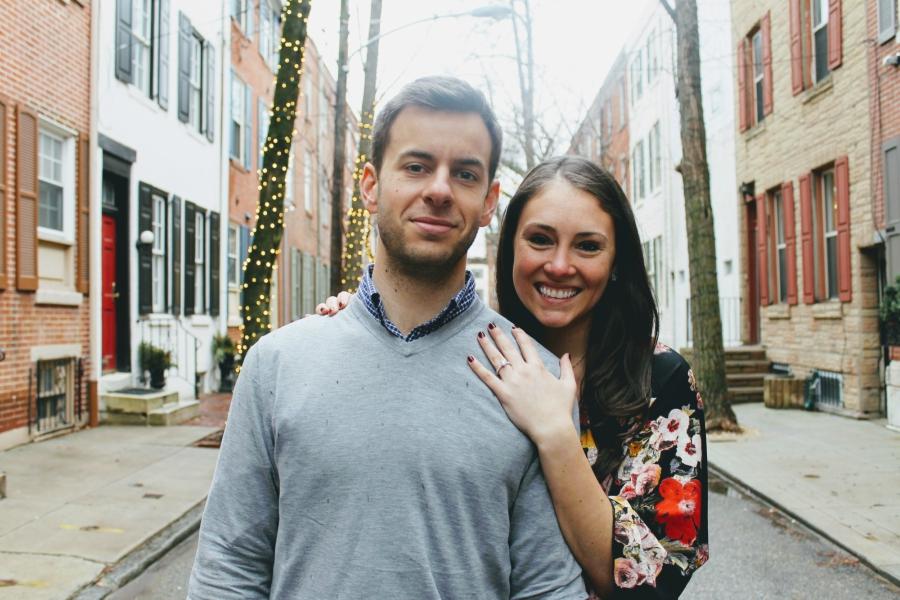 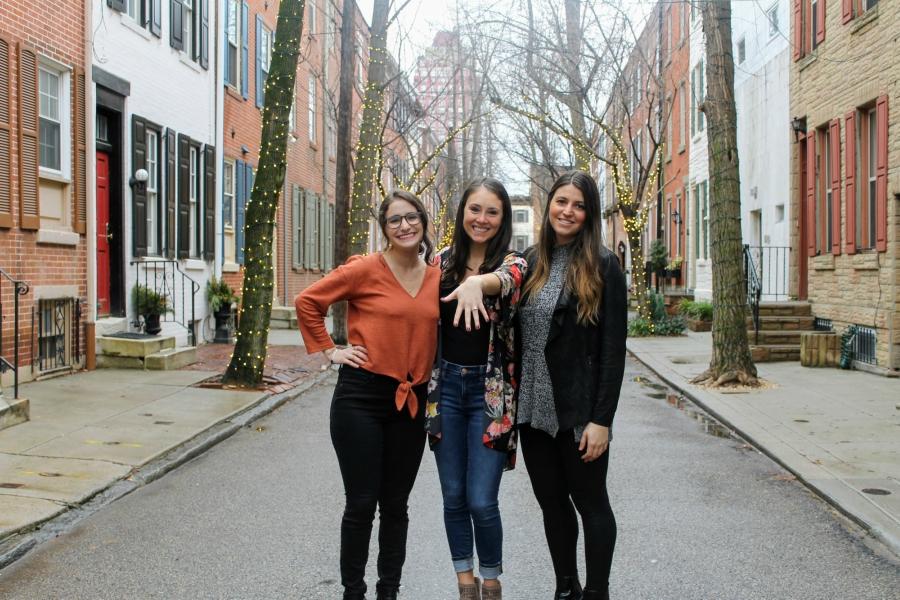 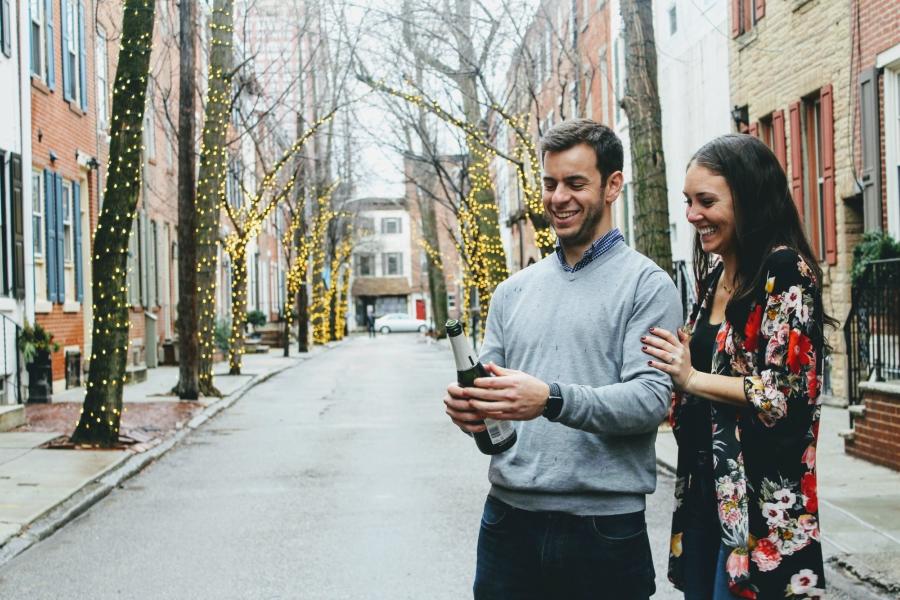 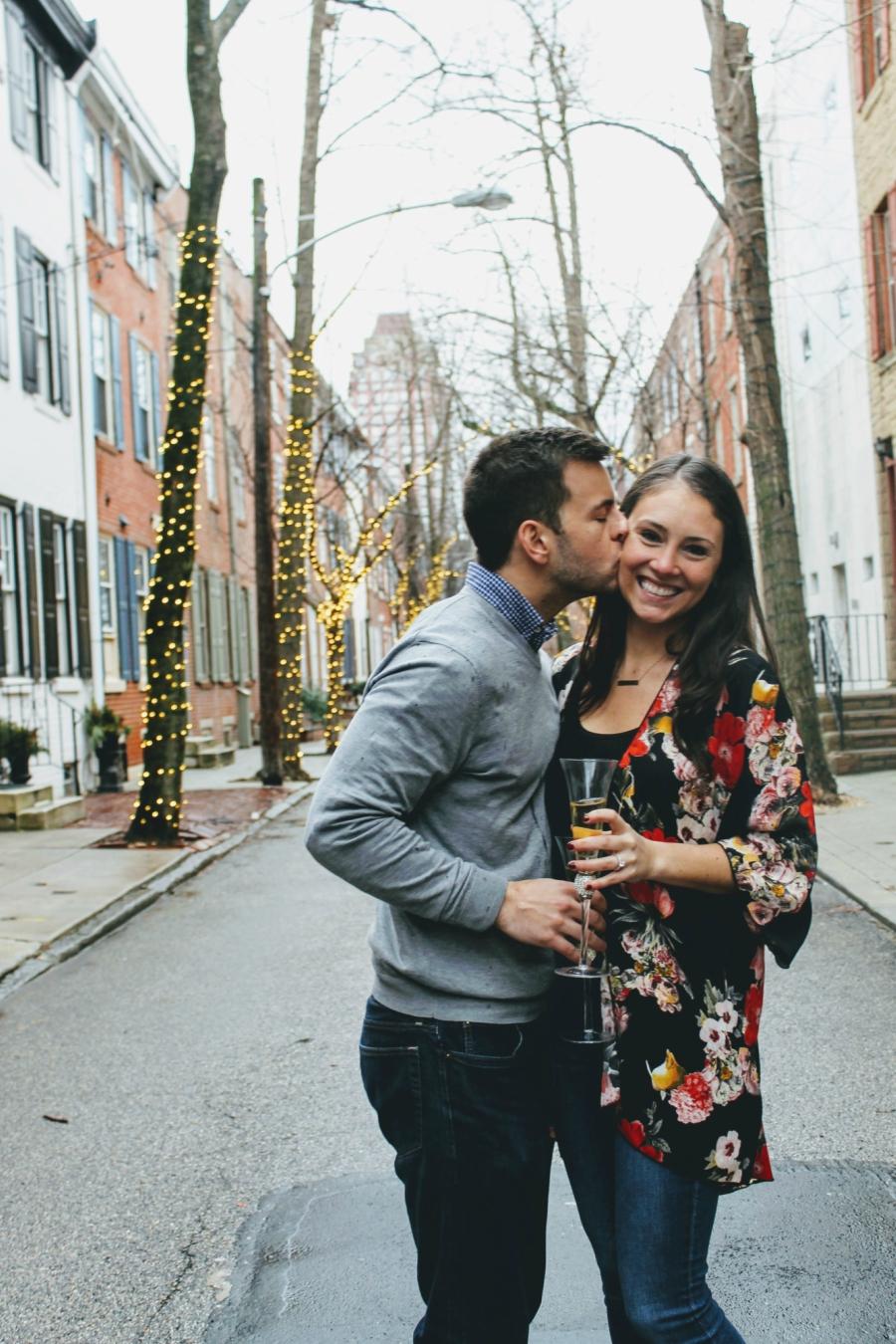 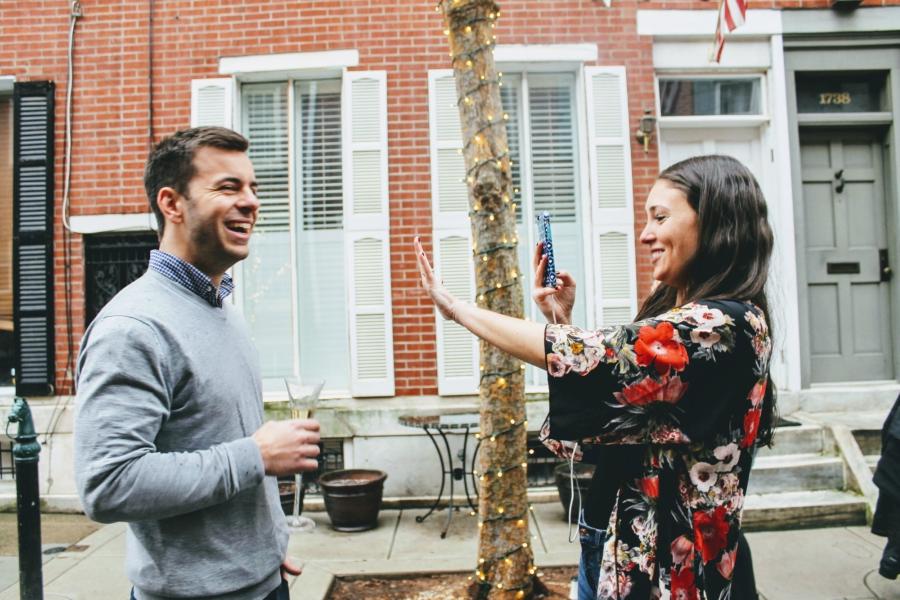 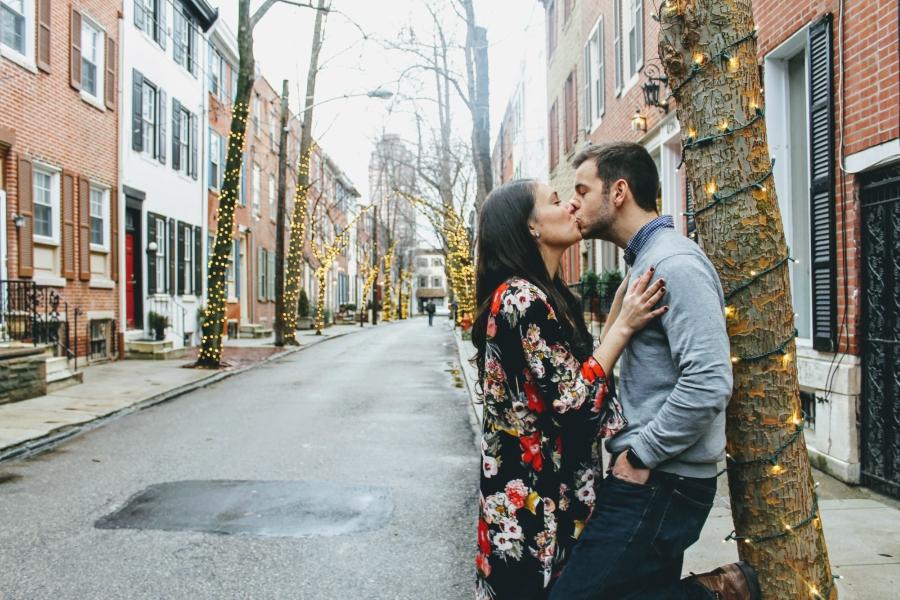 “Afterward, they all went to the Cambridge on South Street for another surprise. There, they found Lauren’s parents and girlfriends from high school, including her best friend Taylor who had flown in from North Carolina. After some celebratory drinks, they all made their way to Casey’s Uncle’s apartment on South Street, where Casey’s parents, brother, and many friends from all aspects of their life were waiting. The night was completed with a cake made by Casey’s mother in honor of the newly engaged couple, adorned with the Philadelphia skyline, the Jefferson Logo, and of course, the Love statue on top.”

Congratulations to the lovely couple! We wish you love-birds the best xoxo

Photos were taken by Jules Lorbecki