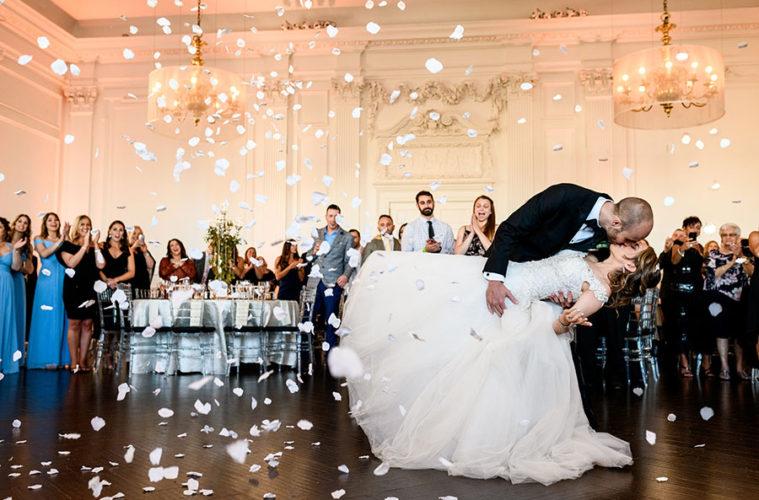 When Philly natives Allie and Joe tied the knot this past June, there were certain details that they had to include in their wedding day. Since relocating to Michigan the couple were missing some of the hometown favorites that only this city can provide. To capture all the whimsy and excitement was Daniel Moyer Photography, who was inspired from his initial conversation with this fun couple.

From the photographer, Daniel Moyer: “When I asked Allie what her ideal wedding day would be way back when we first started talking, she told me getting a Turkey Sizzle from Wawa!”

“Joe and I met in a bar in Philadelphia in April 2014. It was like any other typical night out. I was out with my friends and Joe was out with his. When one of his friends came over and started talking to my friend, Joe tagged along. We immediately started making jokes to each other and were pleasantly surprised when, instead of being weirded out, we would laugh and continue to build upon the joke. I told Joe about my entire family’s cat history. To which he actively participated in listening too. So I knew he was worth my time.”

“We got engaged in June 2018. Joe wanted to take me out for our four year anniversary. He made it a bit too special though – as he actually booked a restaurant for once, and had way too many opinions about the shoes I wore – so I had an idea, but he played it off well. At one point, I was looking for box in his pants but didn’t see one. Joe knows I am a good spy, so he bought a ring box that was very thin (also had a light in it – which is important for later).”

“That night after dinner, we had a drink at the bar where we met. From there, we walked around the city and ended up standing the grass in front of Independence Hall – which always was special to me, as we would always go there to lay in the grass after a night out in the city. As we stood there looking up at the illuminated building, Joe got on one knee and popped the question. It was perfect, because I am a very private person and I don’t like moments like that are seen by everyone. It was just us, standing there in the dark, in the grass (hence why the ring box had to have a light in it). He asked me if I wanted to eat chicken nuggets and awkwardly dance to music with him forever. I was so happy and kind of twirled away, leaving him hanging on one knee waiting. Eventually, Joe asked me what my answer was, and I came back and said yes of course!”

“I can’t lie – it was pretty hectic! A few weeks after I got engaged, I moved to Michigan to start a new job, as Joe had already been out there for a few months. So within 11 months, I moved to a new state where I knew nobody, started a new job, and planned a wedding. My plate was pretty full. However, I had a lot of support from my mom, my sister, my dad (who was more or less my driver to appointments), and of course, Joe! I also was fortunate to be able to fly home often to take care of wedding things. Towards the last seven months, any time I flew home, it would be a weekend full of wedding appointments. It was honestly exhausting. It took a lot of coordination of schedules with my vendors, but it all worked out! While I think in the end our wedding was perfect for us, and it was fun planning – I am happy that it is over, and I can relax with Joe.”

“My biggest inspiration for the wedding was to make it reflective of us as a couple, and our personalities. Joe and I are two people who like to crack jokes, and we don’t take ourselves too seriously. We are a bit quirky and goofy, and we fully embrace it. However, it is a bit difficult to incorporate a goofball sense of humor into a traditional and upscale wedding, without it clashing, so I had my work cut out for me.”

We were also inspired by Philadelphia as well. We wanted to honor the city that was the reason why we met. Our invitations were from Minted, and included the city skyline. They were unlike any other invitations I’ve seen, which was also a plus for me. I also purchased table numbers that showcased the city’s skyline to add to the city theme. Our ice sculpture paid homage to Independence Hall, and had a small etching of Gritty. To top off our Philadelphia theme, we had a Ben Franklin impersonator come to our cocktail hour to surprise all of our guests. Ben was a hit, and he helped set the tone for the rest of the evening. We also stopped at Wawa for wedding pictures, because no event is complete without Wawa.”

“There were many great moments from my wedding day – from getting Wawa in the morning, to every one of our guests singing Bohemian Rhapsody as our final song (which ended up not being our final song due to our guests demanding one more song). My favorite moment though from my wedding day was the ceremony. It was a surreal experience. But at the end, when I finally got to see Joe, it made everything feel so exciting and real. I was excited to see him, and excited to just squeeze his arm. We spent the entire ceremony chatting with one another because we were so excited and happy. During the entire ceremony, I felt as if we were the only people in the room. It was easily the best memory I had.”

“Embrace the chaos, be true to yourself, and don’t be afraid to be creative. Planning a wedding is stressful, and it is easy to get wrapped up in details. It is okay to just abandon an idea or detail that seemed to be so great at one point. Don’t forget the big picture as to why you are having a wedding. Throughout every step I would remind myself that “you have Joe, you have a ceremony, and you have your family.” Which helped remind me that I already had the most important things, and that no matter what – I was going to marry Joe – everything else was ancillary. Remember that with any large event, there are always going to be hiccups and bumps, but the end result is always worth it.”

“My wedding experience was great! I liked all my vendors a lot. I’m honestly a bit sad that I don’t have a reason to talk to them anymore now that the wedding is over. I put a lot of trust in my vendors, as they are professionals and have seen plenty of weddings. Talking to each of them, I could just feel how they really knew what they were doing. I told them my vision and gave them the details that they needed to know to ensure that everything went smoothly. And it did! So thank you vendors for being really great.”