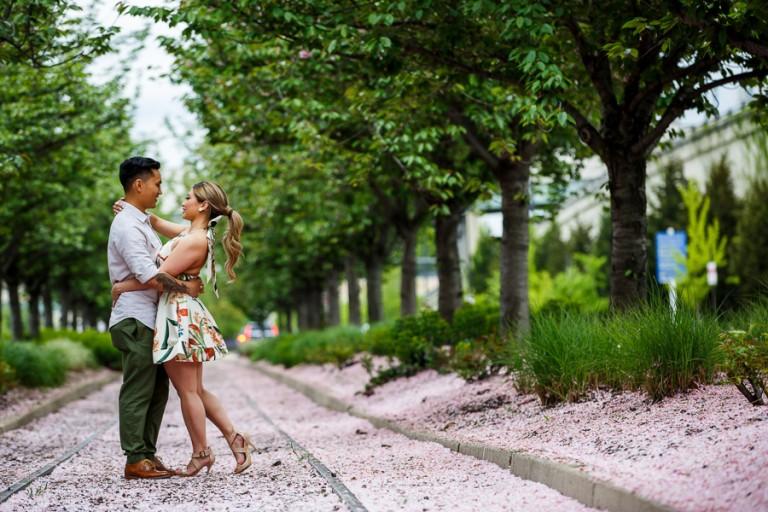 Anastasia Romanova beautifully captured Cathy and Allan’s love, the architectural scenery of Race Street Pier, and the beautiful fallen Cherry Blossoms.  Collectively this awe-inspiring engagement session shows the beauty in LOVE, and Philadelphia.  Cathy and Allan are beyond any doubt a charming couple, and their stylish attire equates in chic vibes that we absolutely love!  We think it’s safe to say that this engagement session is hands down one of the cutest we’ve seen so far!  Keep scrolling to unlock all the positive and pretty vibes pouring from these photos! 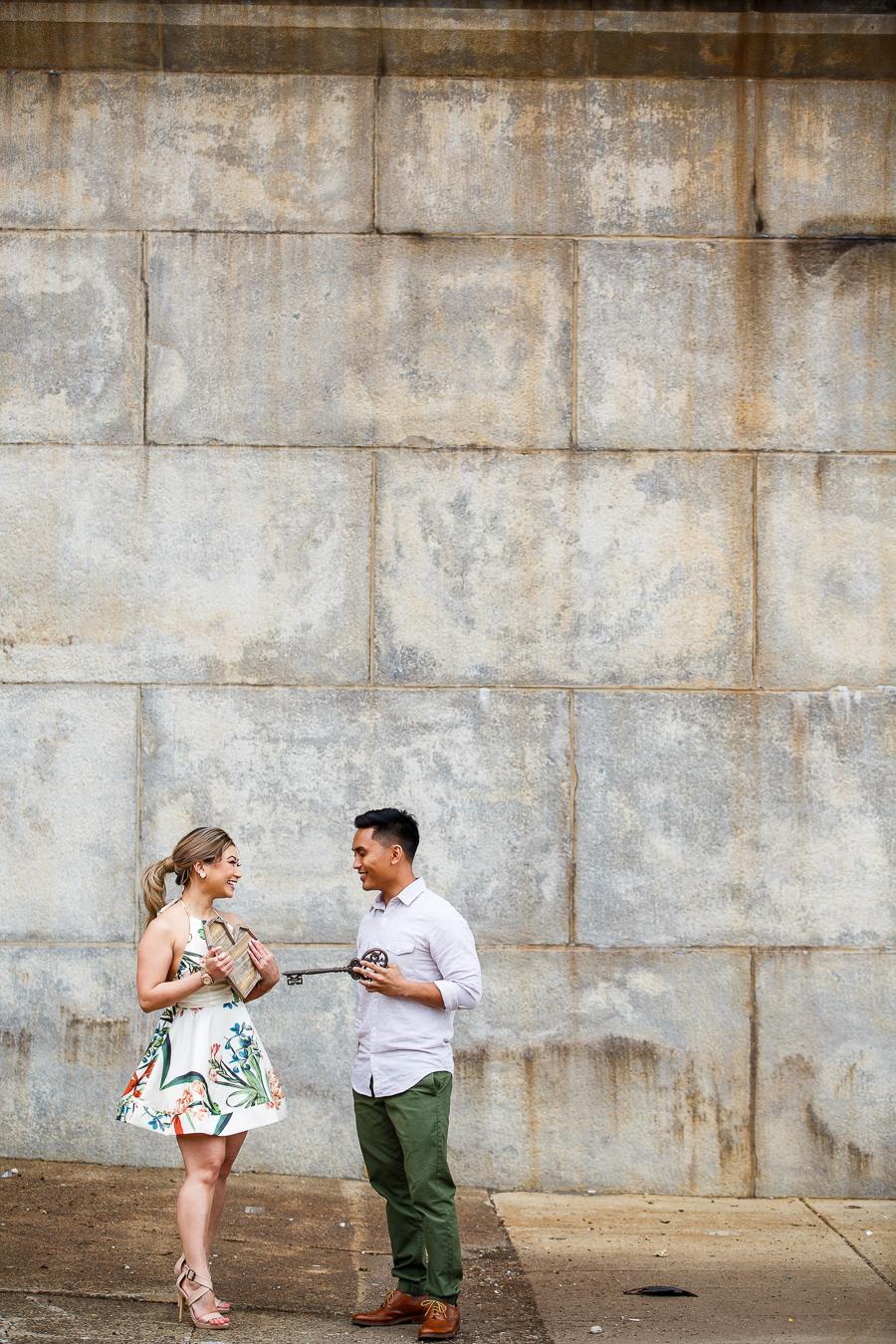 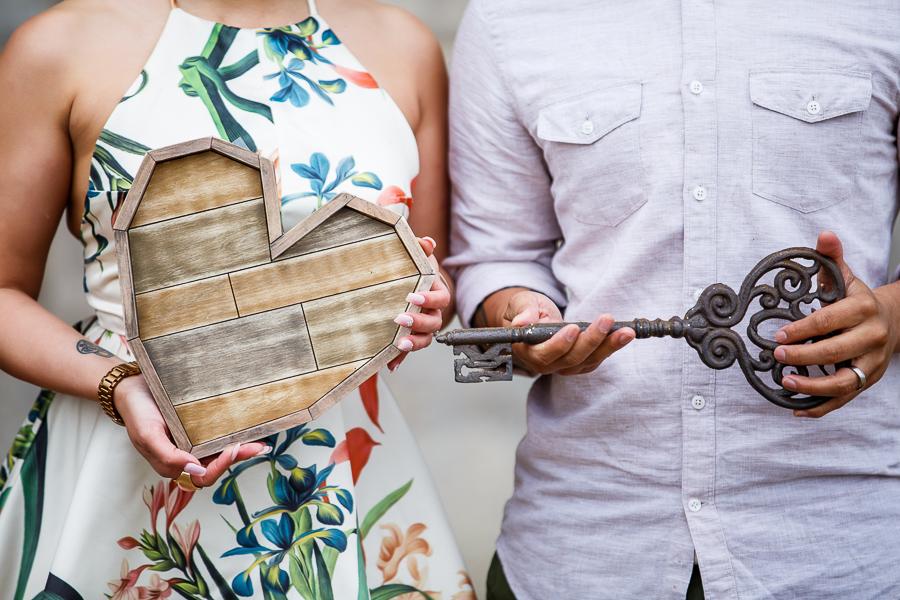 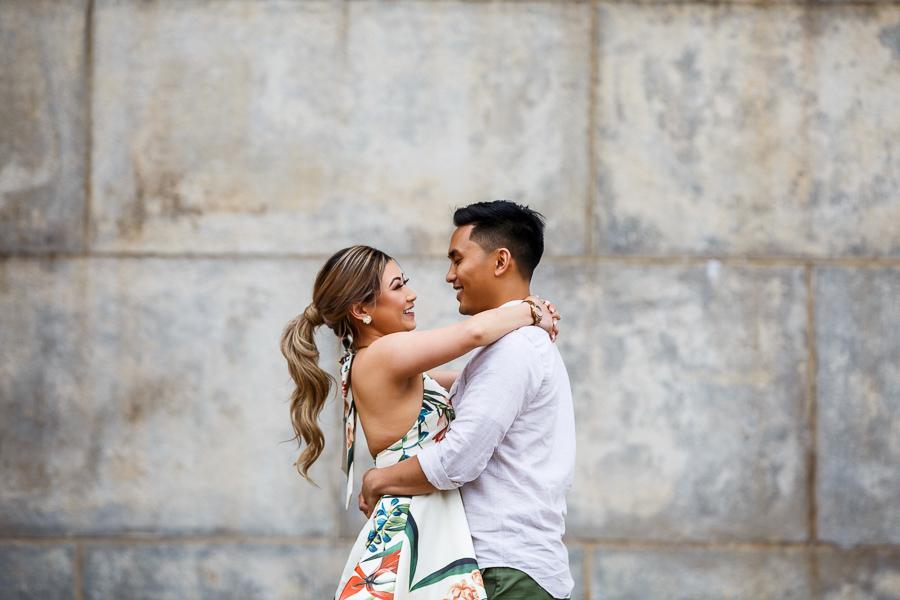 “The way we met was pretty hilarious actually.  I worked at a bank in Southwest Philadelphia, police officers would visit the branch daily to ensure everyone was safe and sign the log we had.  It was a new Sergeant for the 12th district that came in, I had asked if he was Filipino and he said “yes I am you’re good”!  I then said to him “oh I never met any Filipino police officers before”.  His answer to me was “I have two of them and I will send one in shortly”.  Long behold one hour later here comes Allan my now fiance strolling in the branch to sign the log.  The funniest thing is that I was working at that particular bank for 6 1/2 years and Allan was a police officer in the 12th district for a little over 7 years and we never crossed paths.” 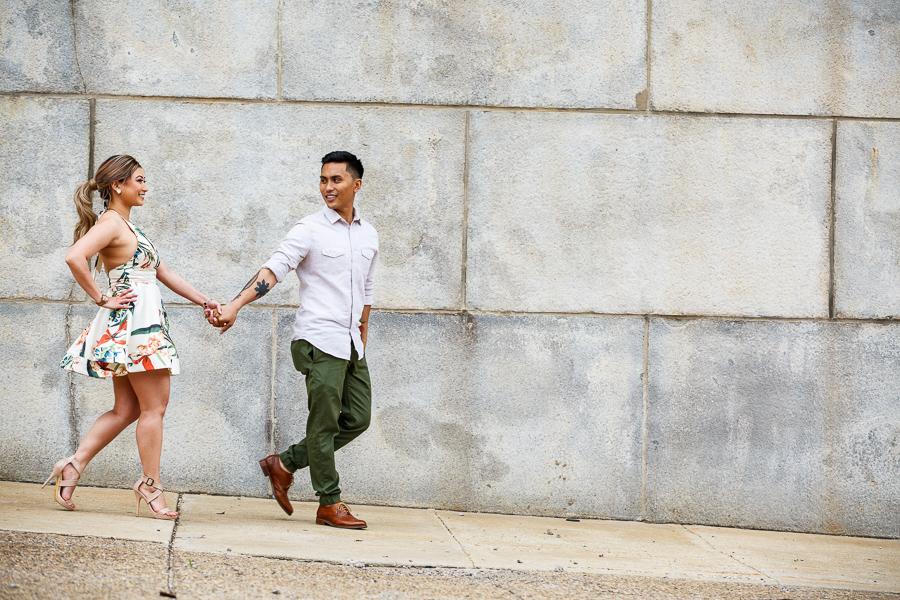 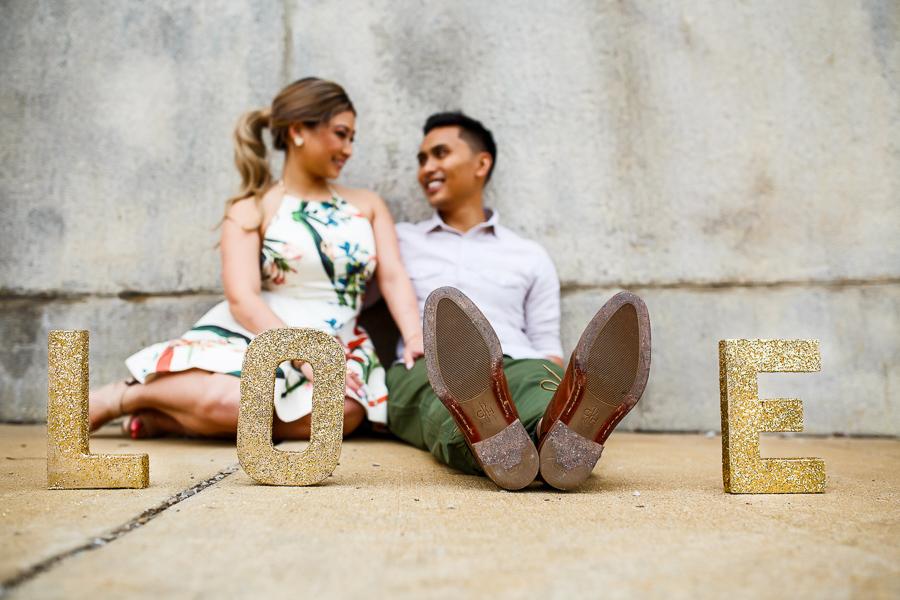 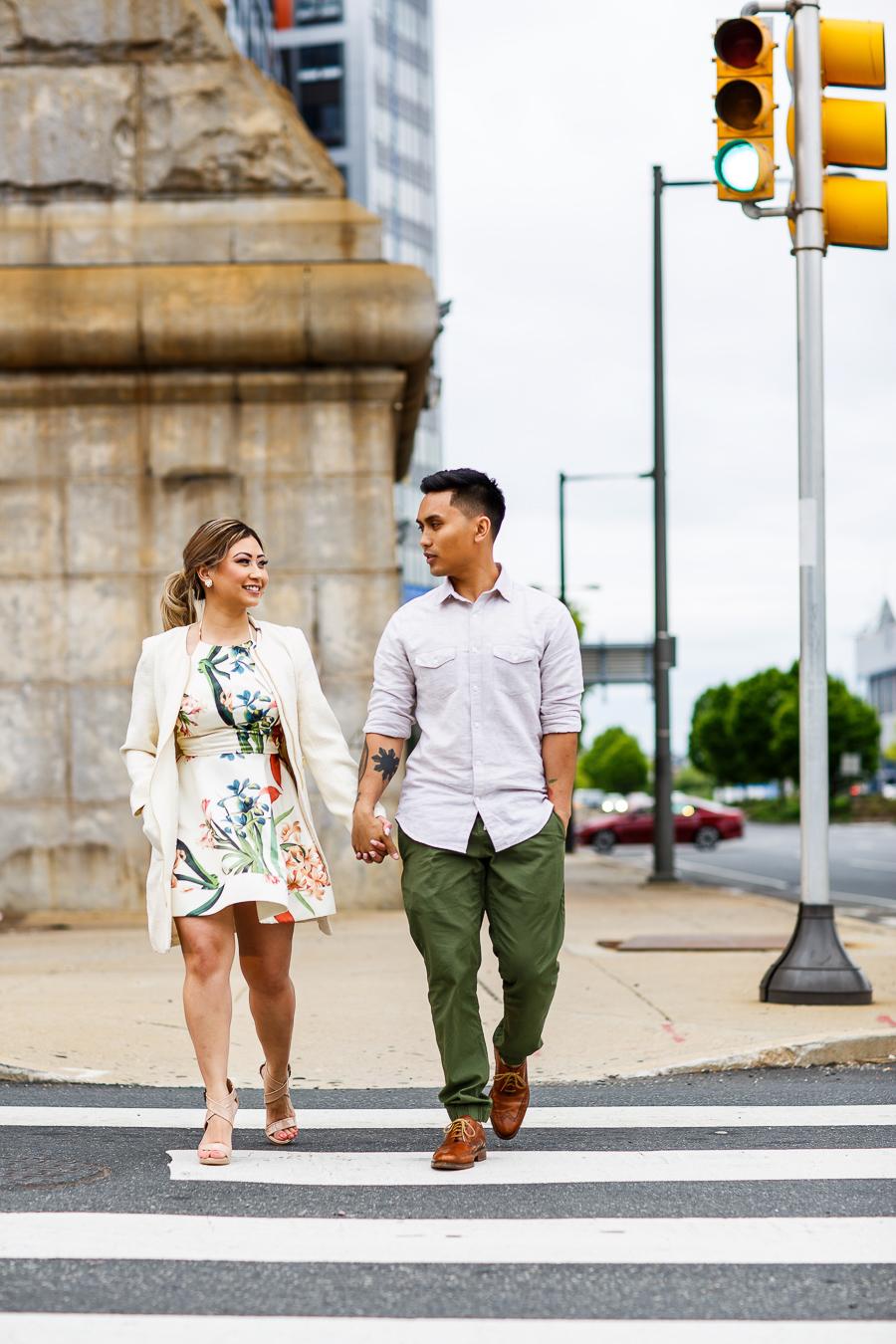 From Cathy: “It’s so hard to really choose what I love most about Allan because he has so many great qualities as a person.  If I had to choose one thing, it would be his dedication.  He is very devoted when it comes to his career and our family (we have two boys Maximus who is 3 years old and Brayden whom is 1 year old).  He will put in 110 percent in everything he does without any complaints, this is what I love most about Allan.” 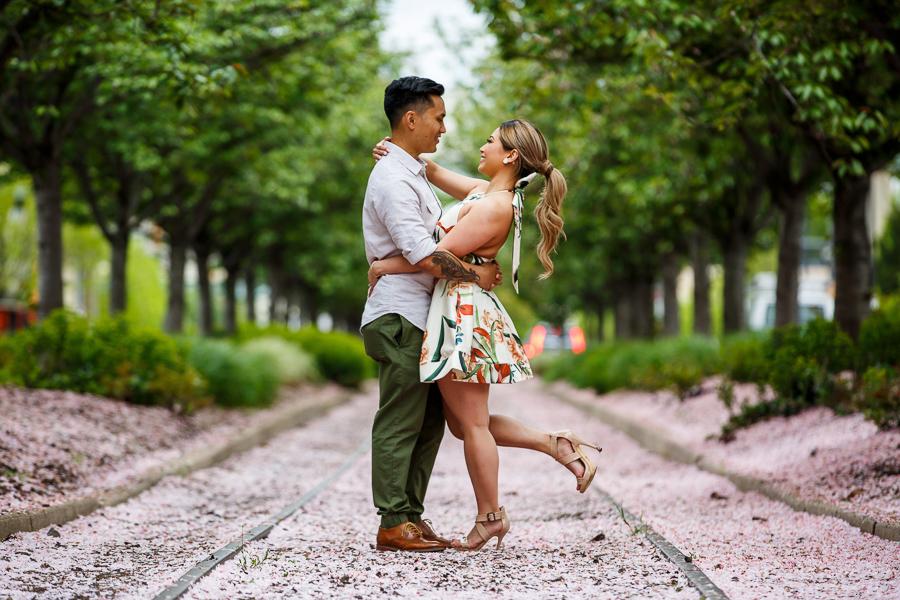 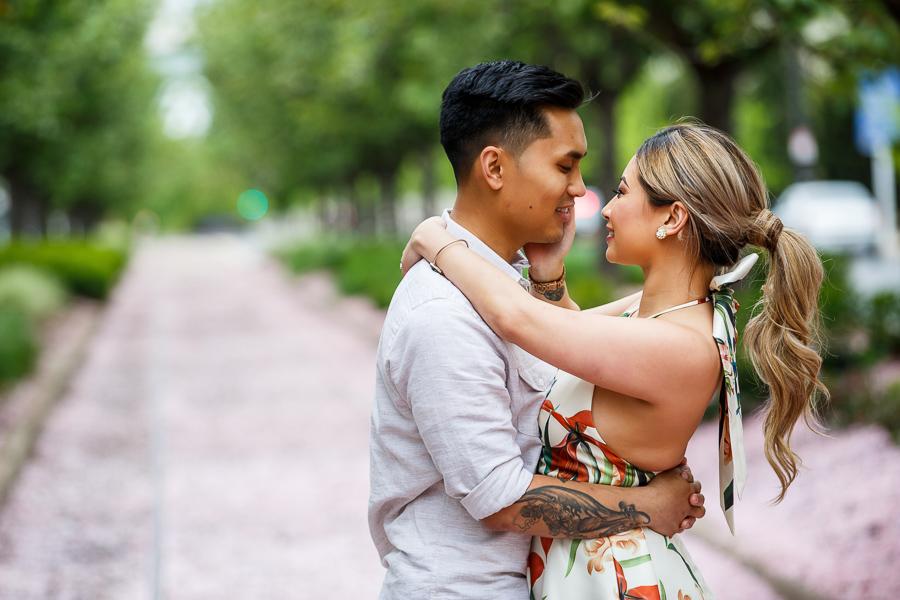 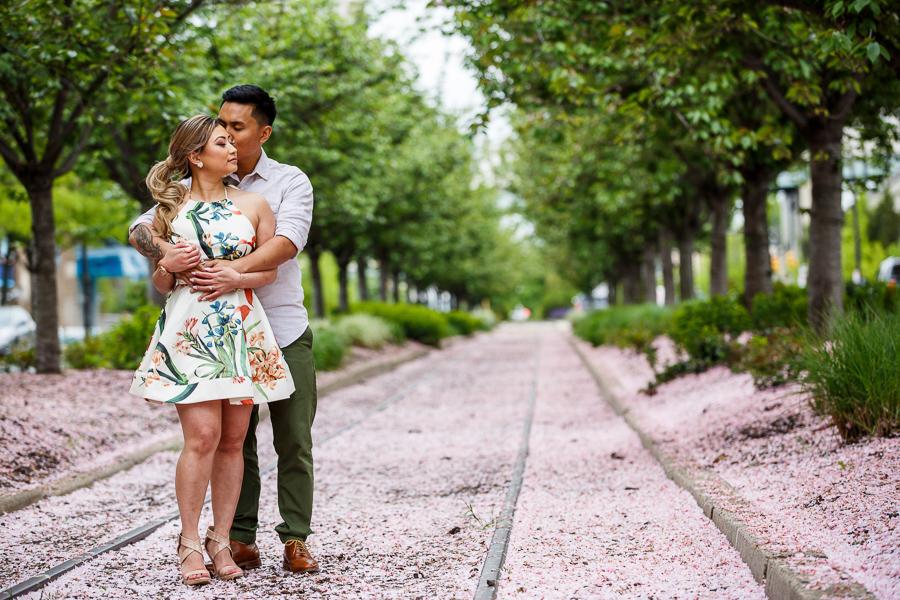 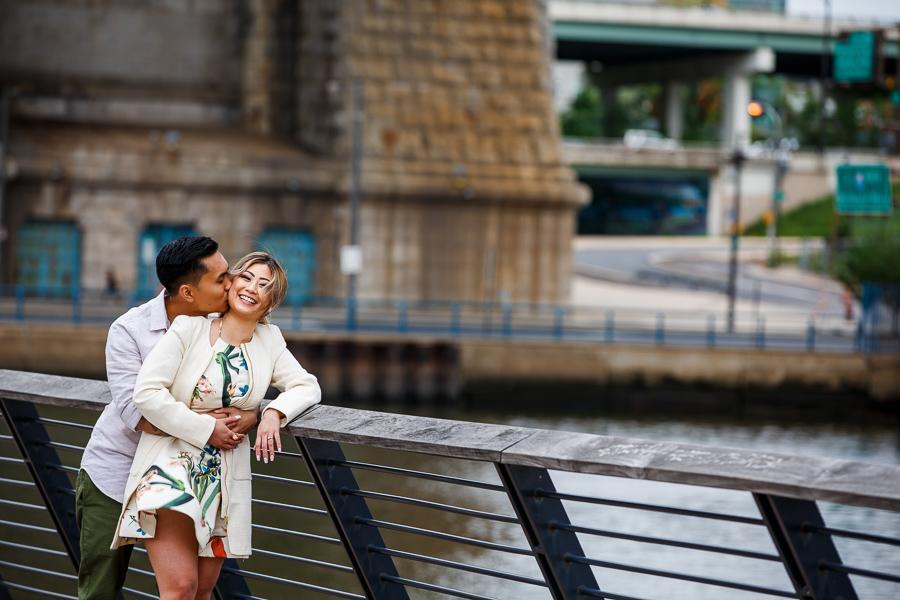 “Do you mean how did I ruin my own proposal? lol

It was October 2nd, 2014 my 29th birthday, we had dinner setup at Ocean Prime with Allan’s sister (Ashley) and her fiance (Teddy) for 6:00 pm.  Ashley asked me during the week if we would like them to pick us up because Teddy wanted to see a Flyer player down at city hall who was doing autographs, I declined the offer because I am not into sports.  Then she asked the day of if we needed a ride because it’s hard to find parking in Center City, I also declined and stated we always valet the car so it’s not a problem.  She also texted me saying that it’s crazy traffic to leave early, which I did not! I was sent home by my boss at 2 pm that day because he was in on it and I took a very long nap (I was 4 months pregnant with our second son). I then complained to Allan about how annoying his sister was because she’s being way too pushy and it only takes us 10 minutes to get to the restaurant.  We arrived to Ocean Prime and had basically the top floor to ourselves and a table that had rose petals on it with birthday confetti so I thought it was just to celebrate my birthday!  Then here comes the staff with signs that said ” Will you LOVE me forever?”  Allan went down on one knee and asked me to marry him, after looking at the ring first I gave him a big kiss and said “Yes, I do”!

After the proposal was done, they finally told me that Allan planned on proposing to me at Love park because they had dyed the fountain pink and he thought it would be really cool.  Ashley  had recruited her friends and family to hold the signs she made too.  I felt so bad and suggested we can go back to Love park and do it again but of course they told me no, you’re too difficult Cathy lol.  So that is how Allan was suppose to propose and how he proposed!” 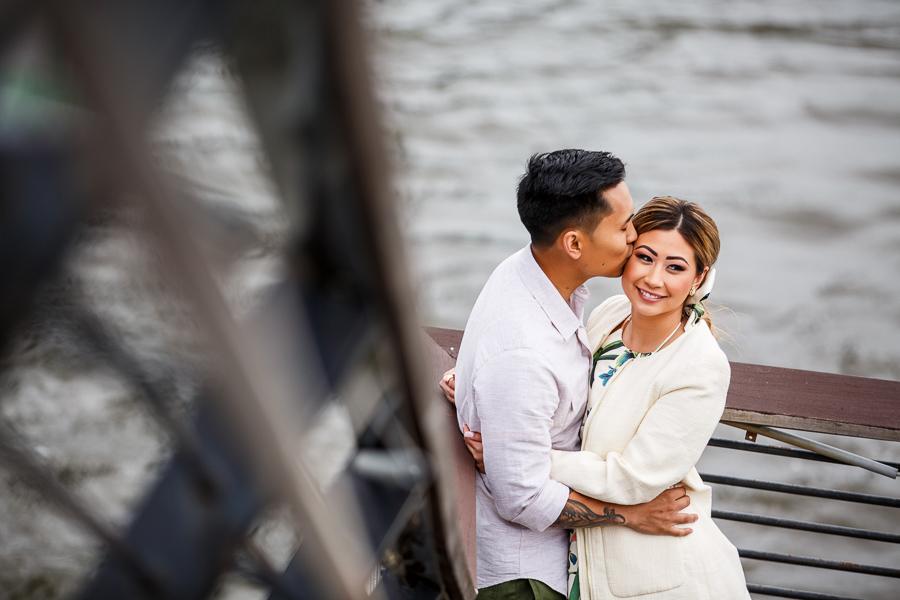 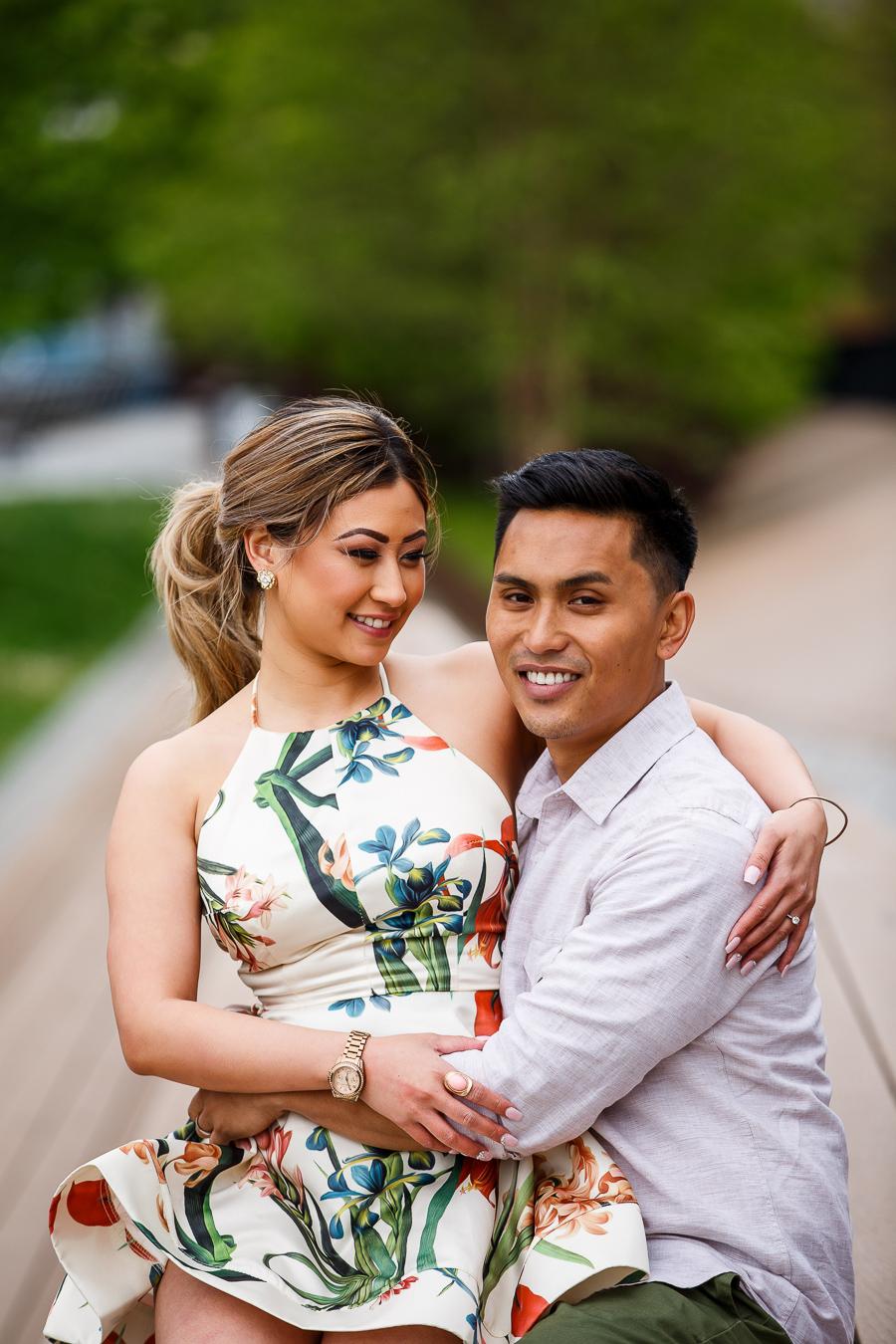 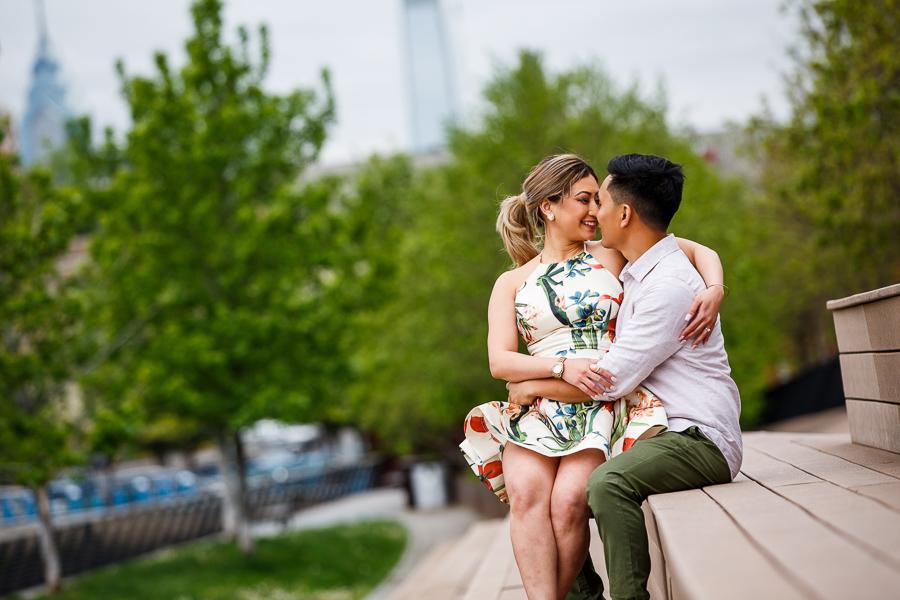 “The inspiration we had for our engagement photo shoot was having fun and having a classy look!  But also having our photographers capture a lot of candid shots that were more natural.  Our photographers knew exactly what we wanted to accomplished and made it happened!” 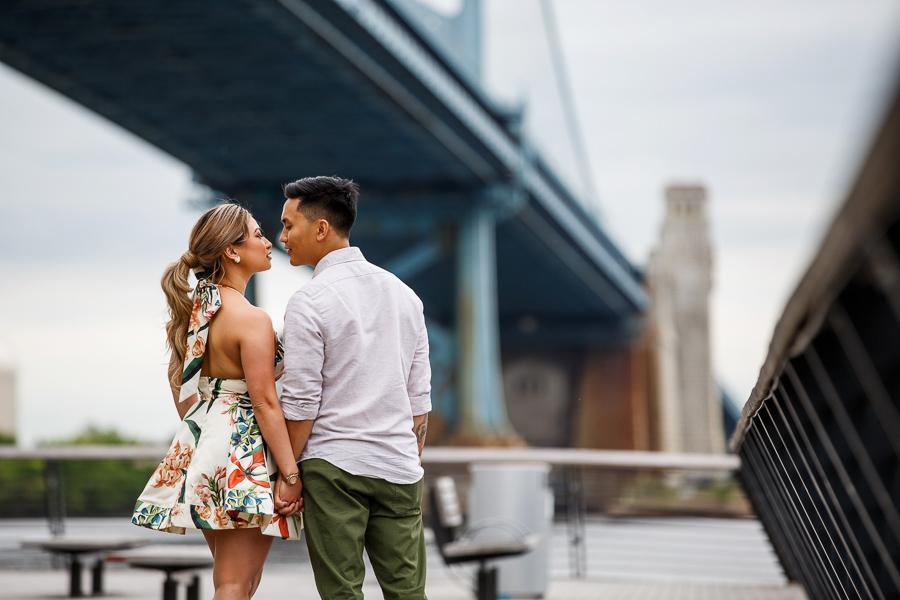 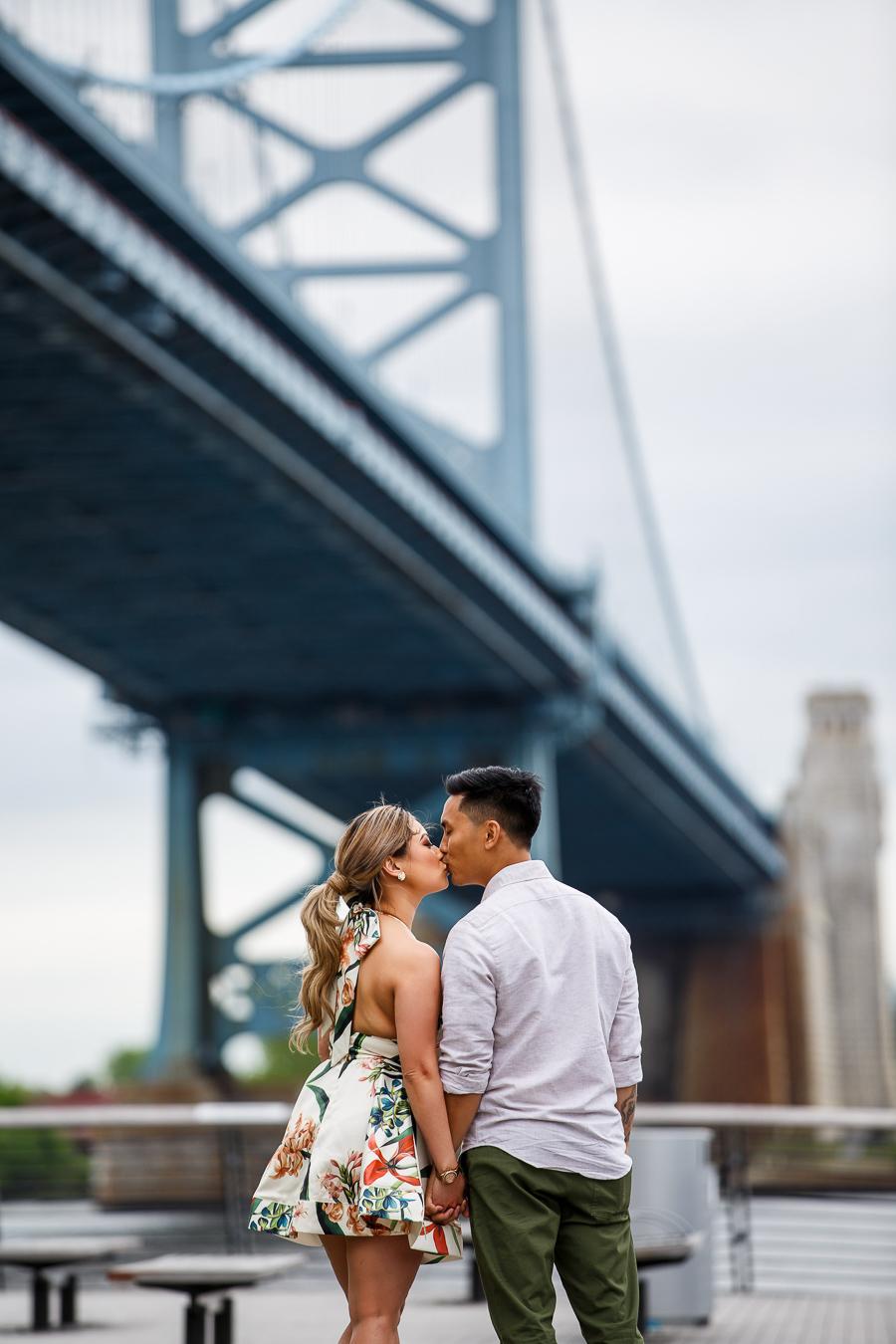 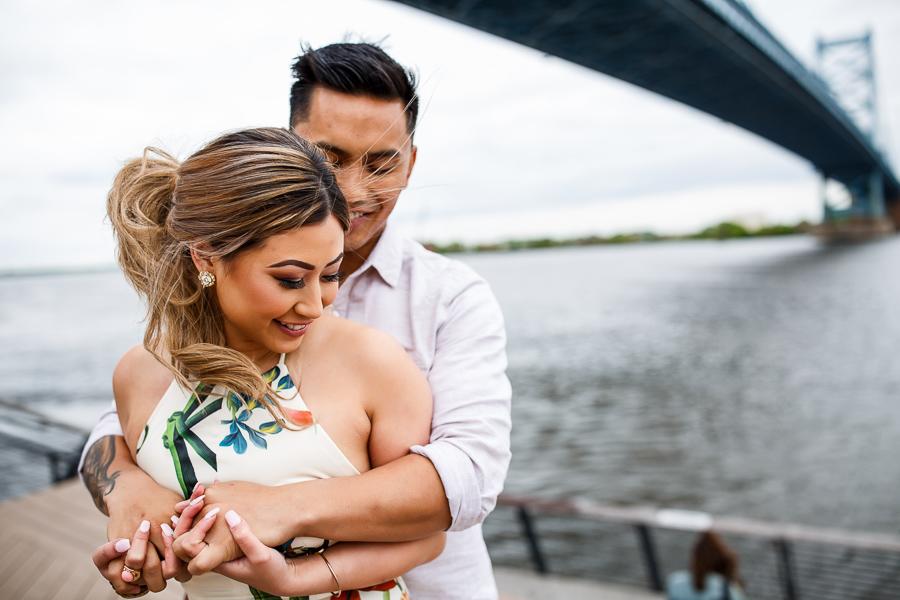 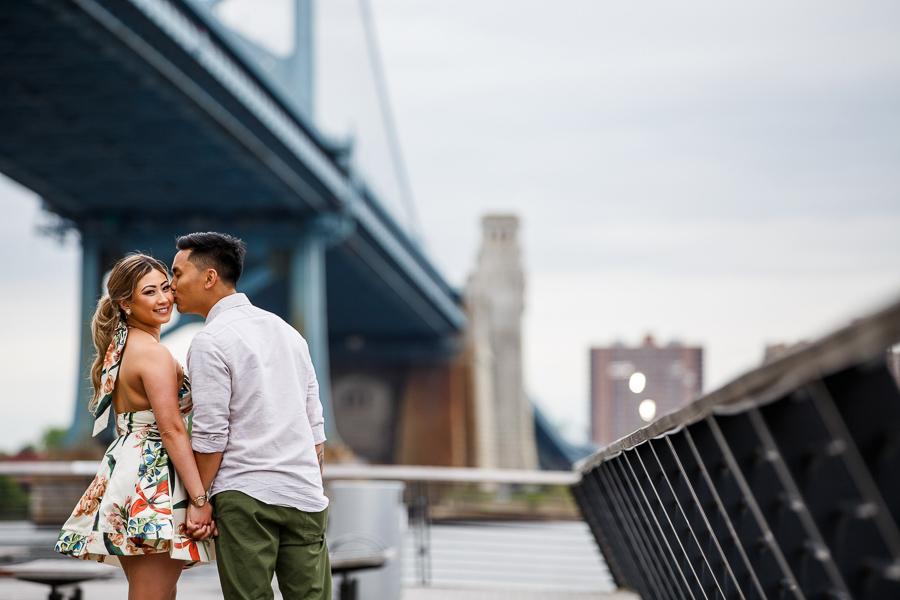 Have you started wedding planning?

“Absolutely!  I had loads of fun, Allan and I knew what we wanted and didn’t waste anytime on choosing a venue and booking everything else after. We agreed we wouldn’t meet too many businesses where it would gives us a harder time to choose which vendors we would like to book with.  So we had a game plan and it worked! We booked our photographers, videographers, florist, dj, wedding booth, limo, shuttle, hotel block, my makeup artist and hairstylist within 2- 4 months of booking our venue in 2015.  I believe team work makes it fun and not stressful for the couple.  So really I do not have much more to do besides send out the invitations (which are sitting in our room ready to go) and print out the place cards.  I even asked some of my friends who are brides to be if they needed help with any projects because I am left with nothing else to do! lol.”