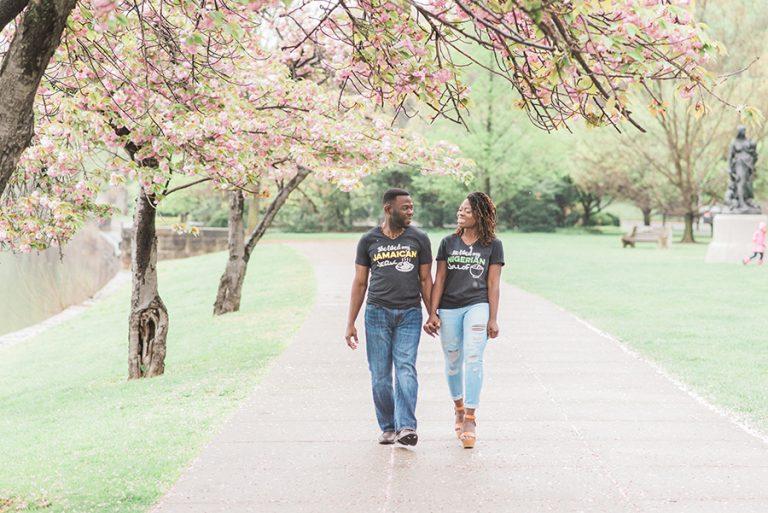 Ric and Derin are stealing our hearts with their cultural merging engagement!  Both studying to become doctors and as lovers of their heritage this couple shares an amazing bond that translates into every photo.  Tonjanika Smith Photography captured the pure essence of their relationship as they showcase their Jamaican and Nigerian background.  They began their day in Center City dancing with Philadelphia’s City Hall as their backdrop and finished the day with some sweet moments in Fairmount Park.  Congrats to the lovely couple, we wish you both the best!

From the Photographer, Tonjanika Smith: “Neither rain, 2 med schools, nor hundreds of miles could stop this love. Ric, Jamaican, and Aderinola (Derin), Nigerian, met in Philadelphia and had to return to the place where it all began, despite both being doctors in the making! The laughter and general ease made it so much fun to document their love story despite the sky falling. We were even able to document their mini dance party in the cherry blossoms.

While currently both in Medical School, Ric proposed at the John F. Kennedy Center with a quartet singing playing “Latch” by Sam Smith, their song, in the background.

The wedding planning has been pushed until Derin’s 4th year of med school to accommodate schedules as well as family members traveling from different countries. Regardless of the date, the multicultural fete is sure to be unforgettable.

Oh, and the shirts? Derin made them. “She liked my Jamaican Jerk.” “He liked my Nigerian Jollof.” How cute is that?” 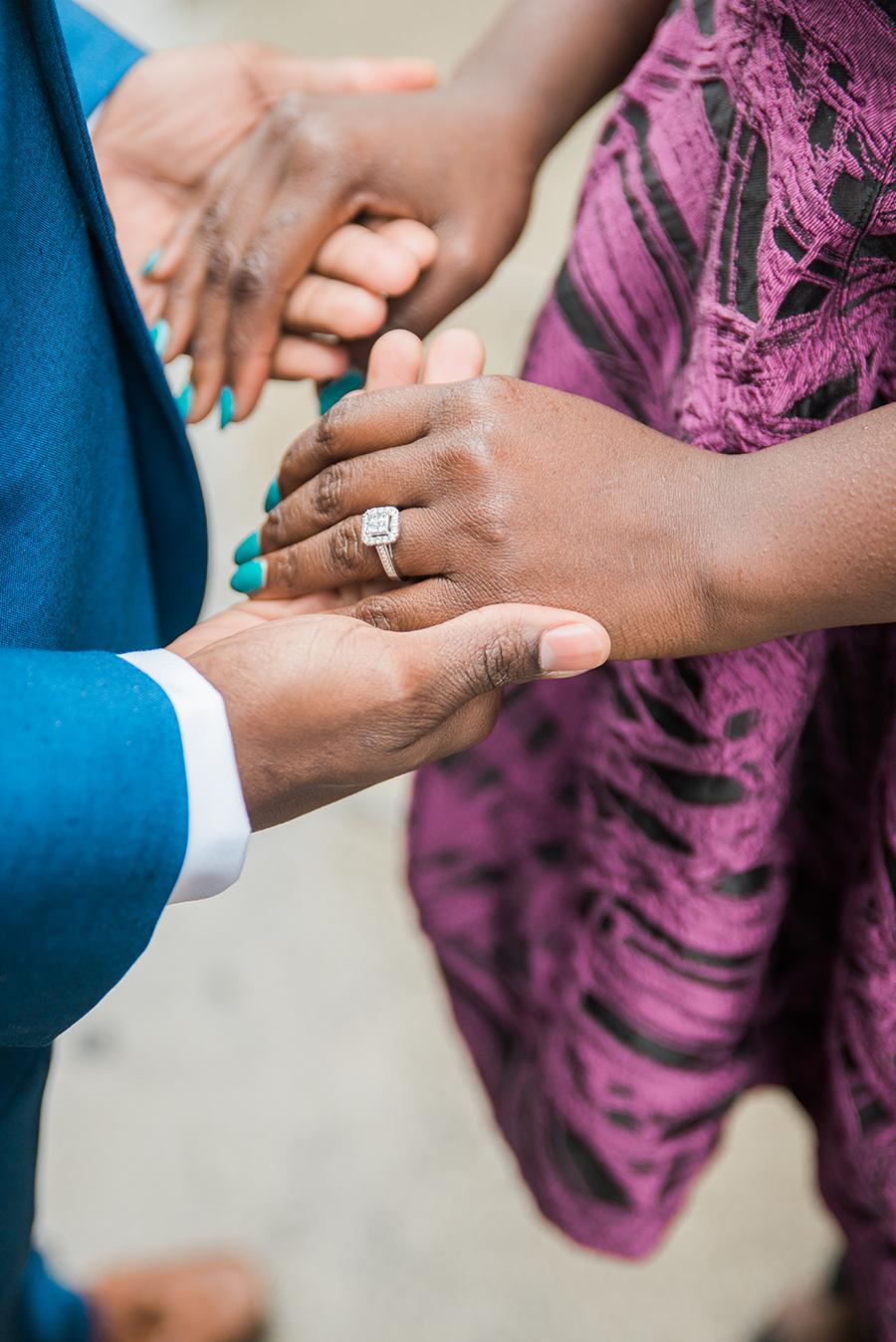 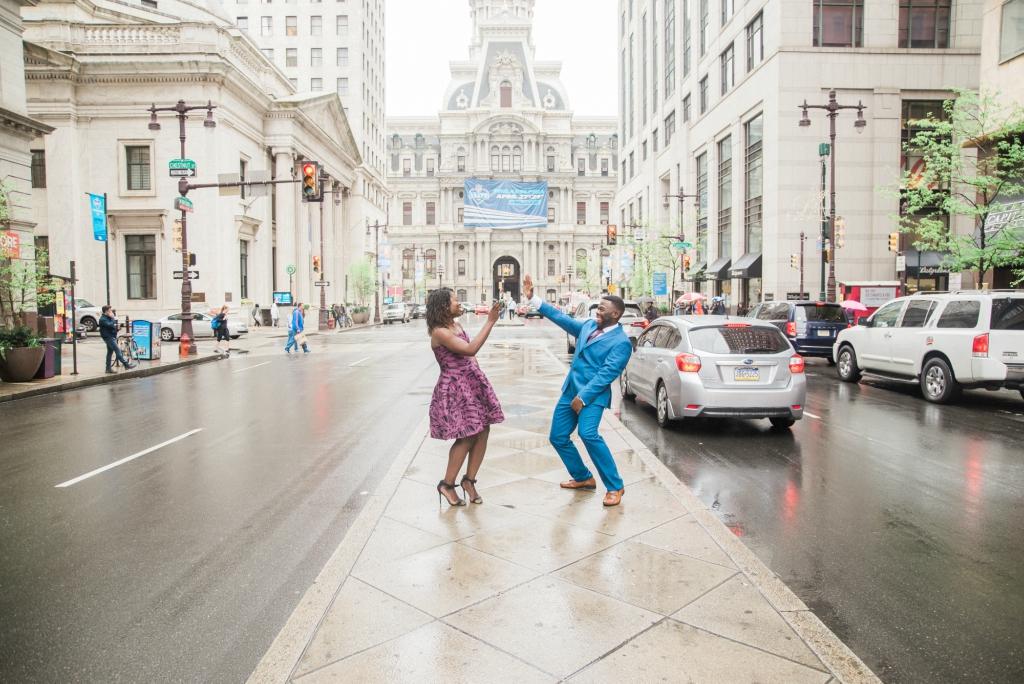 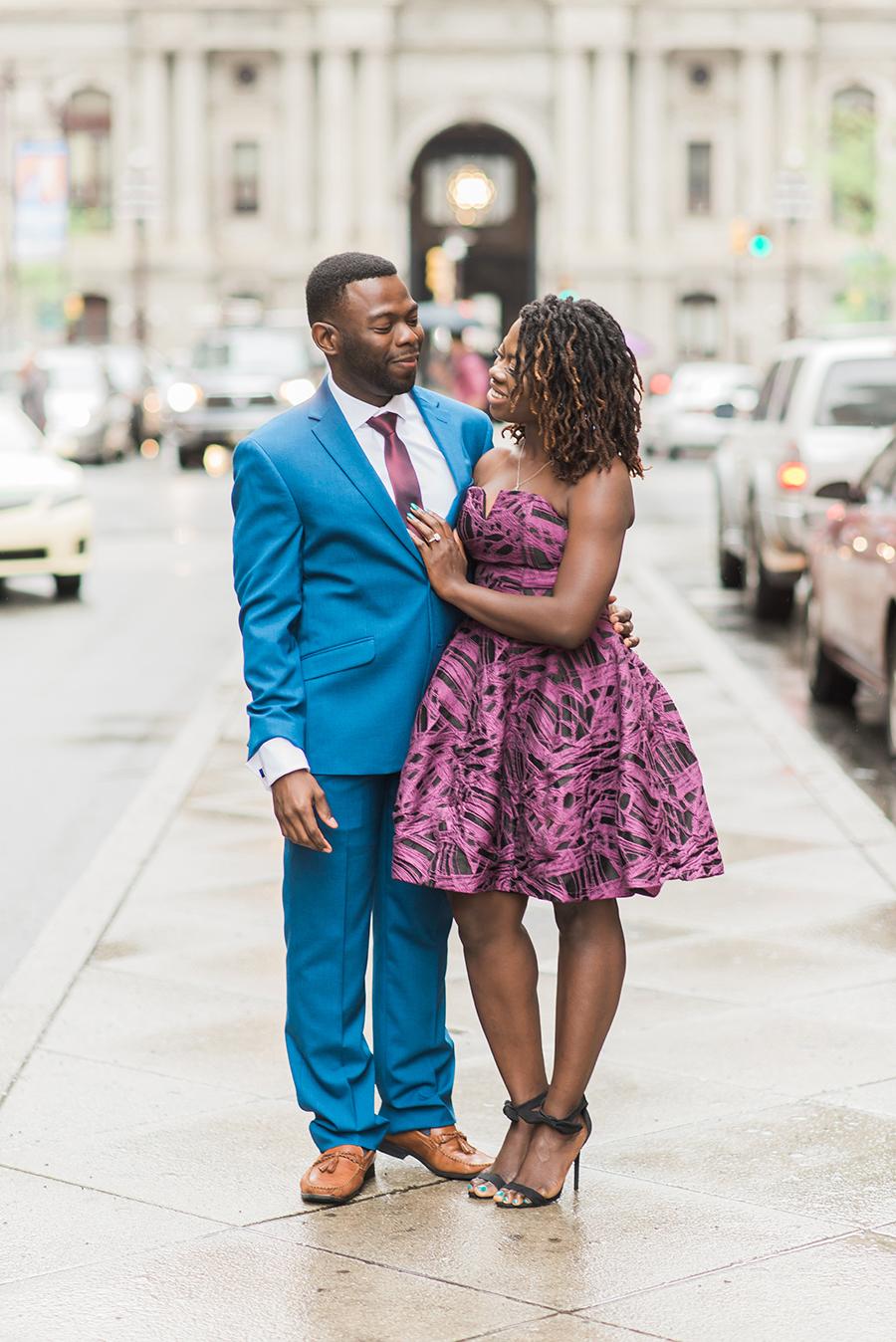 “We met at a friend’s housewarming party in August 2014. At that time, we were both living in Philadelphia. What’s interesting about this is that I almost did not go to the party and we actually could have met on three prior occasions! Thankfully we didn’t as we were both in different phases of our lives then. When we did finally meet, we were both single. I didn’t know anyone at the party besides the host, but Ric struck a conversation with me and before I knew it, I was laughing like I’ld known him for a long time, and he was singing Sam Smith’s “Latch” to me. He put on the works!” 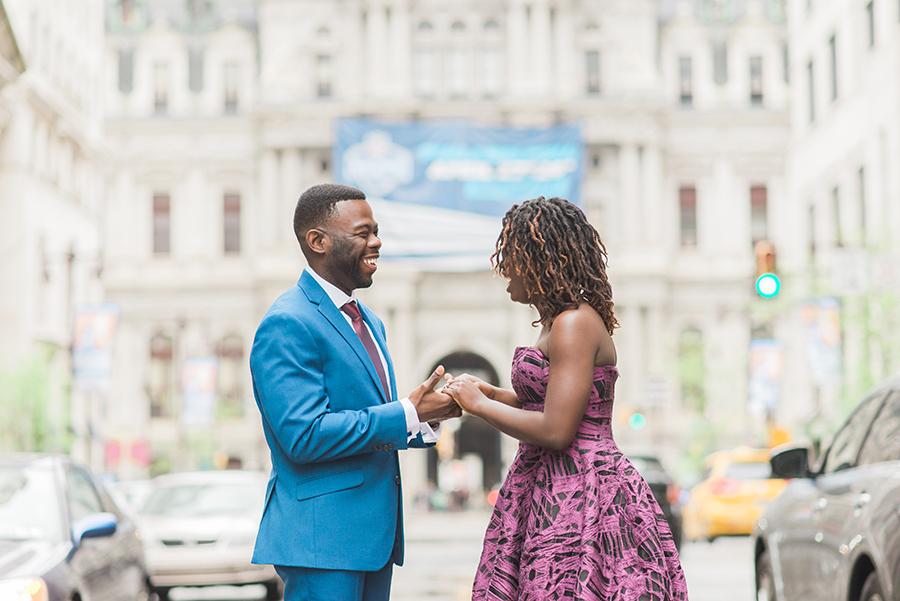 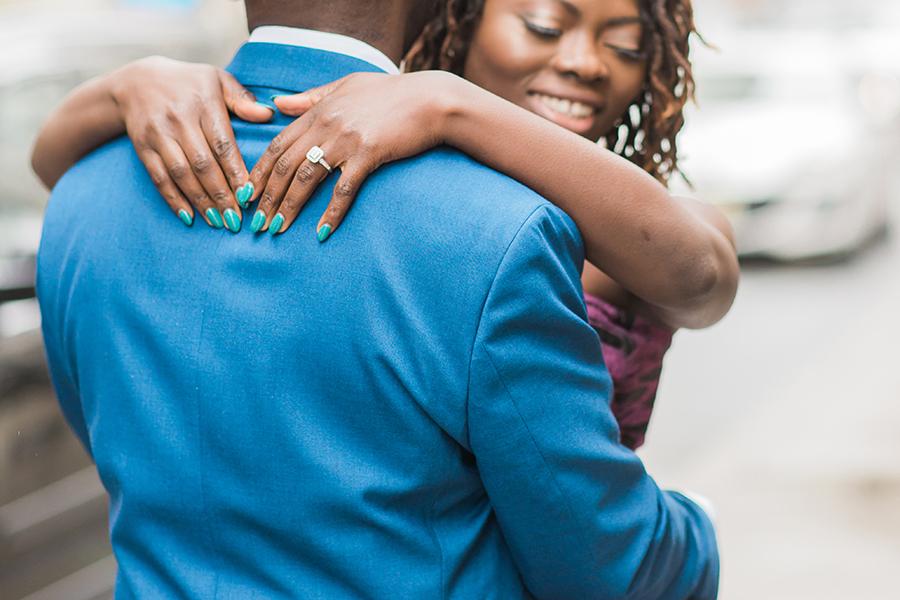 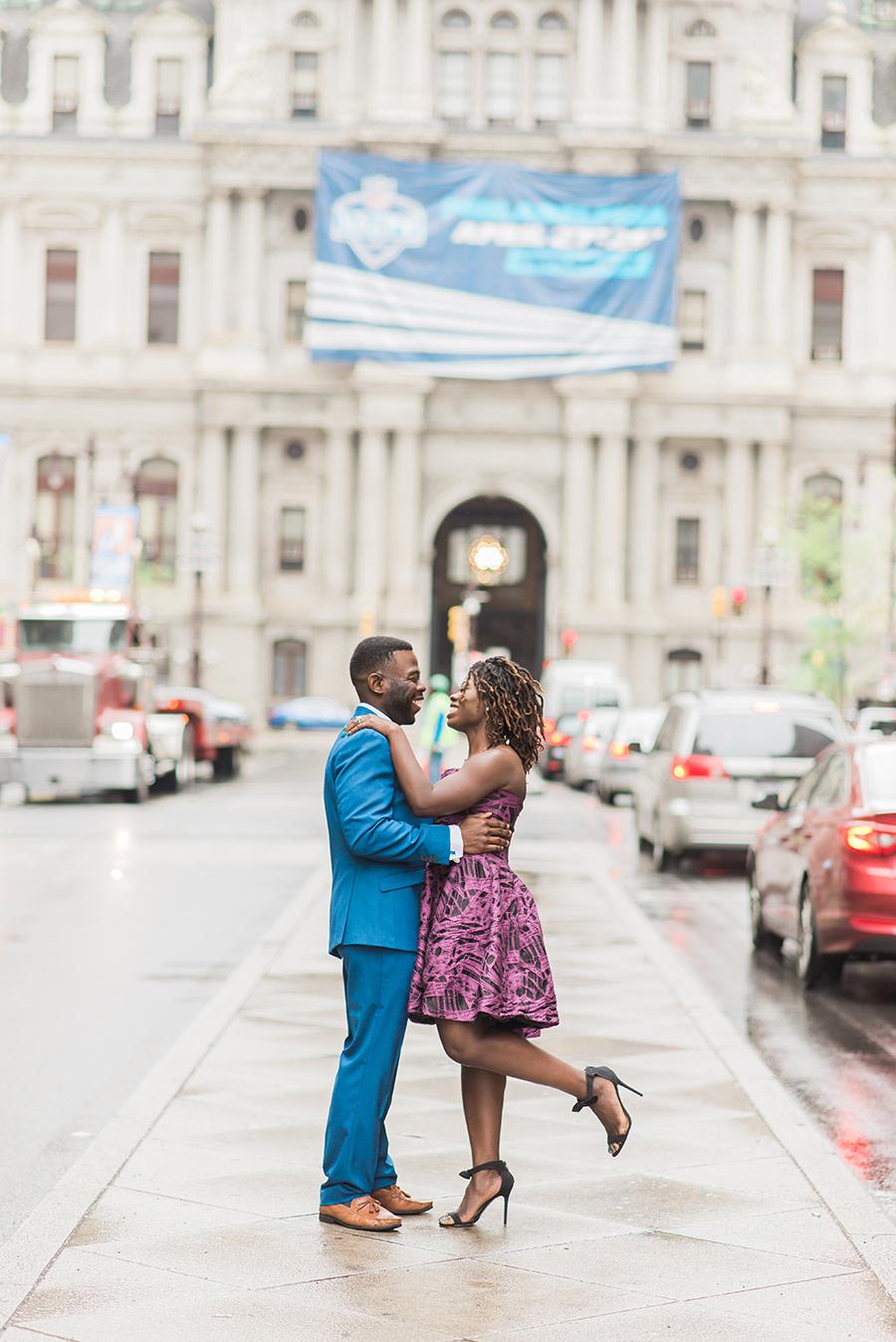 “I love the way he makes me laugh! He’s been making me smile and beam with joy since the first day I met him. We’re both relatively serious people but together, we’re goofballs.”

“I was visiting Ric in Washington D.C., where he was living at the time. I was on Christmas break and we were supposed to be leaving for Jamaica in a few days, however, he had got us tickets to a concert put on by The Choral Arts Society of Washington DC at the Kennedy Center for Performing Arts. I honestly did not suspect a thing! In fact, I actually made us late to the concert! The concert ended and we walked out to the halls when a friend of Ric’s who had been in the performance asked us to come down the hall and listen to a quartet group. We walked over and they started singing our song, “Latch” by Sam Smith. I was so excited and turned to Ric, “They’re singing our song!” At that moment, Ric also began singing along and telling me he wanted to spend the rest of his life with me. He got down on one knee and asked me right there in the halls of the Kennedy Center if I would marry him – first in my native language (Yoruba) and then in English. I was beyond overjoyed!” 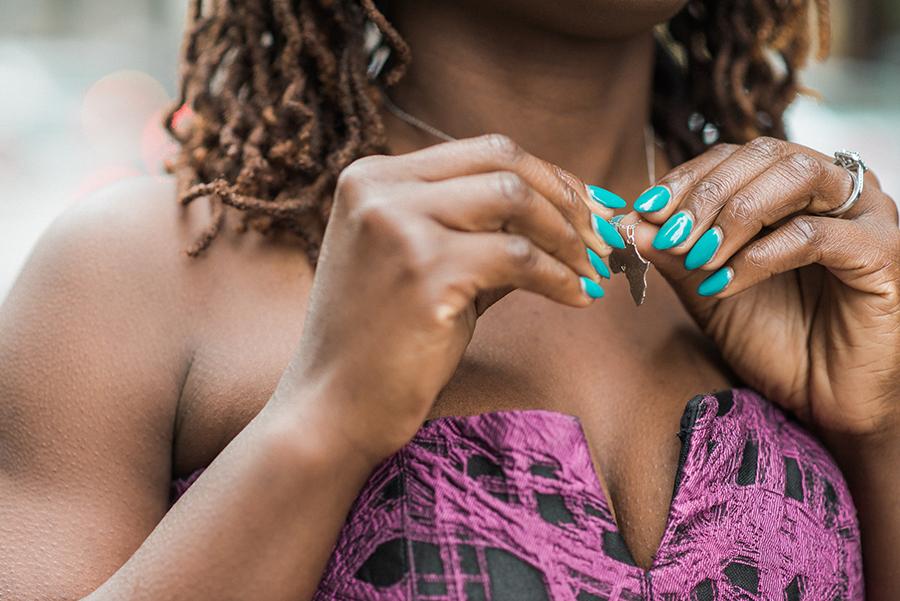 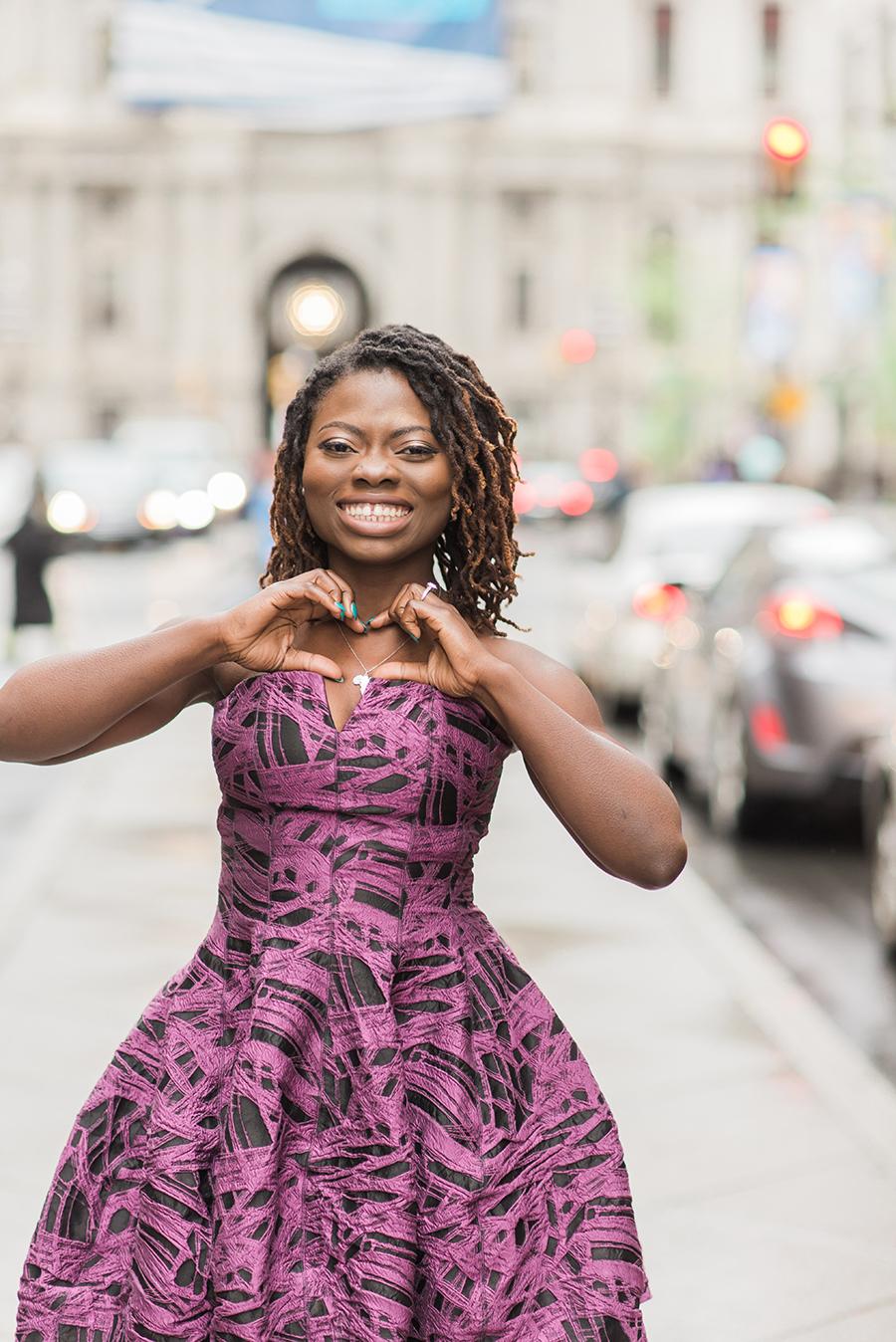 “We wanted the shoot to capture our personalities and our respective Jamaican and Nigerian heritage. Ric brought up the idea of T-shirts and I loved it and designed and ordered our shirts through Custom Ink. The location of our shoot was another challenge we had. We’re long distance with me being in Columbus, OH, while he was in Washington D.C. at the time. Initially, we were looking for affordable photographers in both cities, until one of my friends suggested Tonjanika as our photographer. That’s when we realized Philadelphia was actually the PERFECT city! It’s where we met and holds so many memories for us. The Center city backdrop and Kelly drive scenery were everything I imagined it would be!” 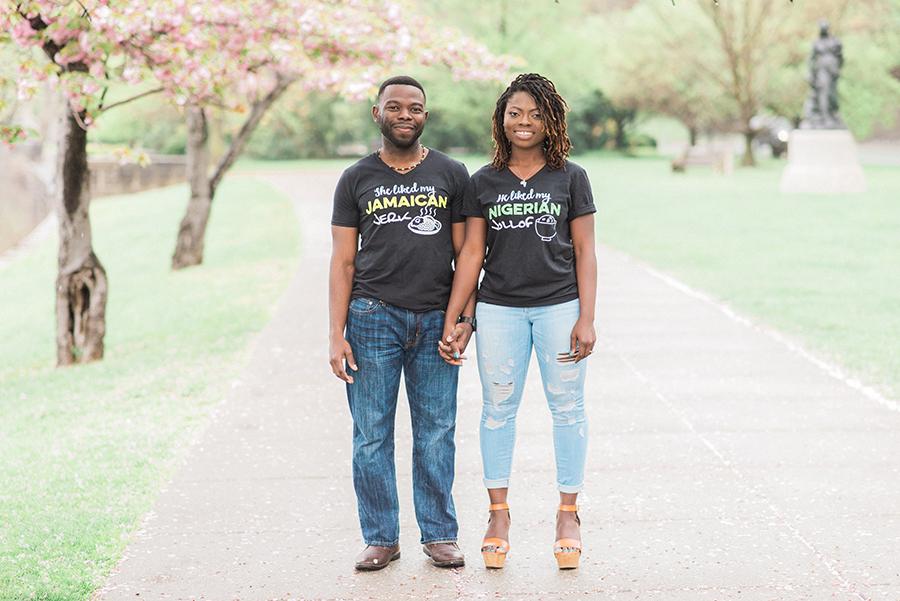 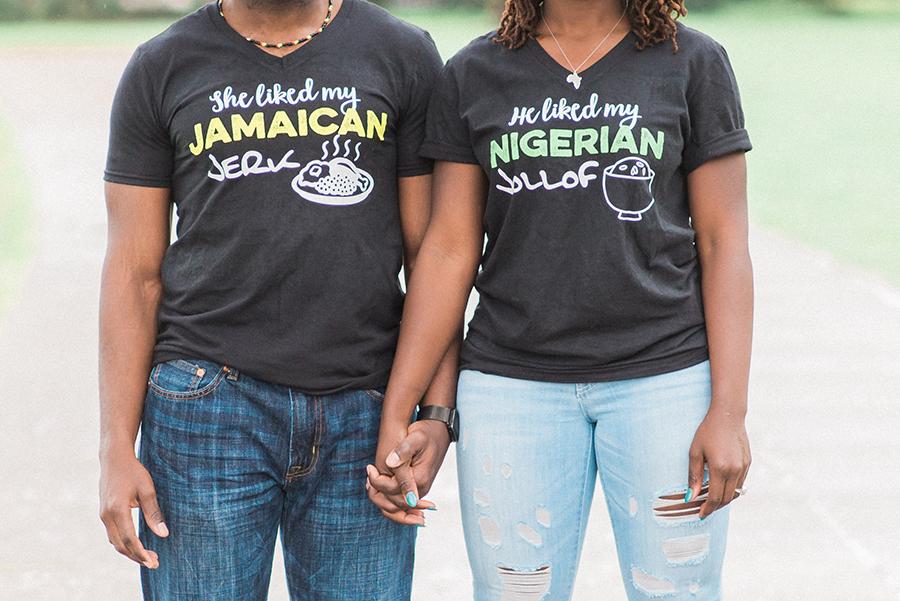 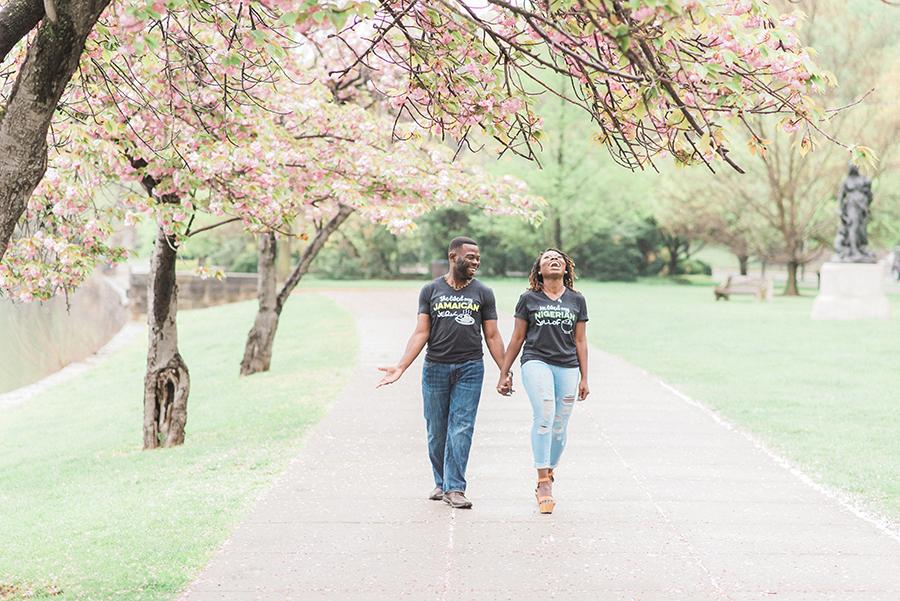 “After we got back from Jamaica, we immediately started planning the wedding. However, things got hectic. We’re both in medical school (though he’s graduating this year), and our schedules were incredibly challenging in finding the perfect date, as well as adequate time to plan and involve our families whom would be traveling from at least three different countries. It got overwhelming, to say the least, and we decided to put off our “dream wedding” to my last year of medical school. It was certainly a smart decision!” 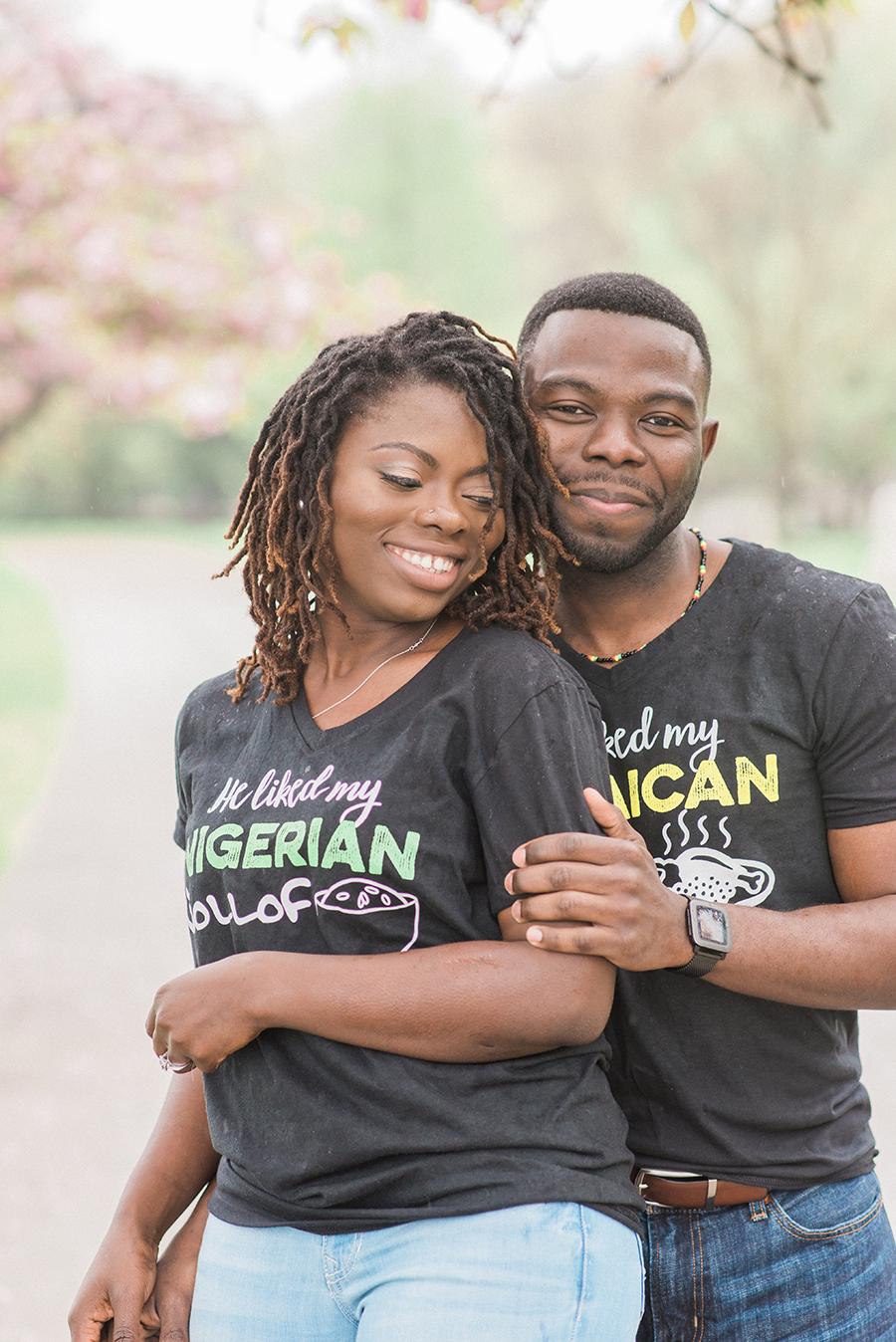 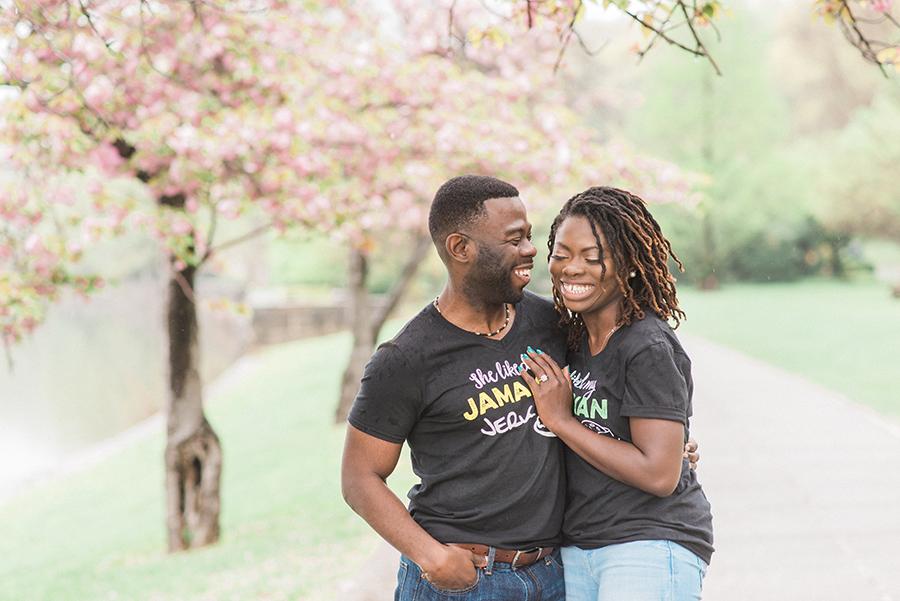 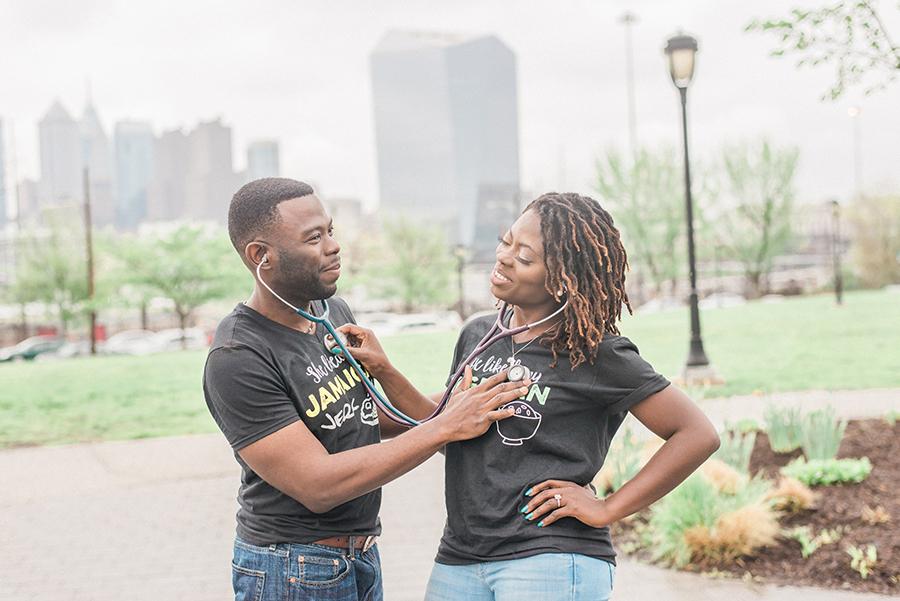 “It was great! Tonjanika was easy to work with and brought to life the ideas we had. We were at ease and laughed throughout the entire shoot. It started raining halfway during the shoot, and despite that, she didn’t let that dampen the mood. We worked with the weather and it was absolutely awesome!”