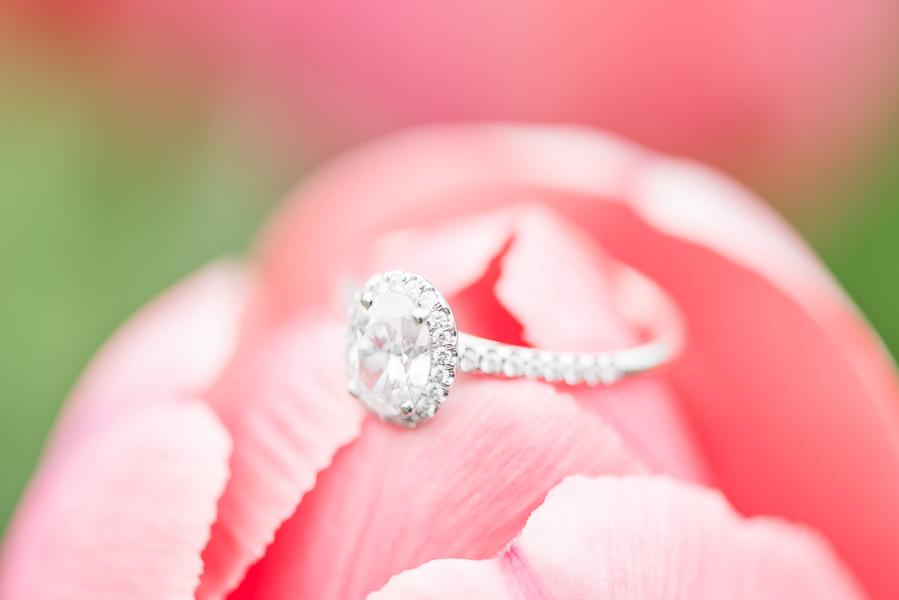 We LOVE a great proposal story and the heartfelt details that go into planning such a special moment.  We ask every couple that we feature on Philly In Love to share how their significant other proposed, and we must say there are a few that made our hearts flutter!  The heartwarming proposal stories below are just a snippet of all the amazing Philadelphia love stories we share, but these are definitely worth the read! 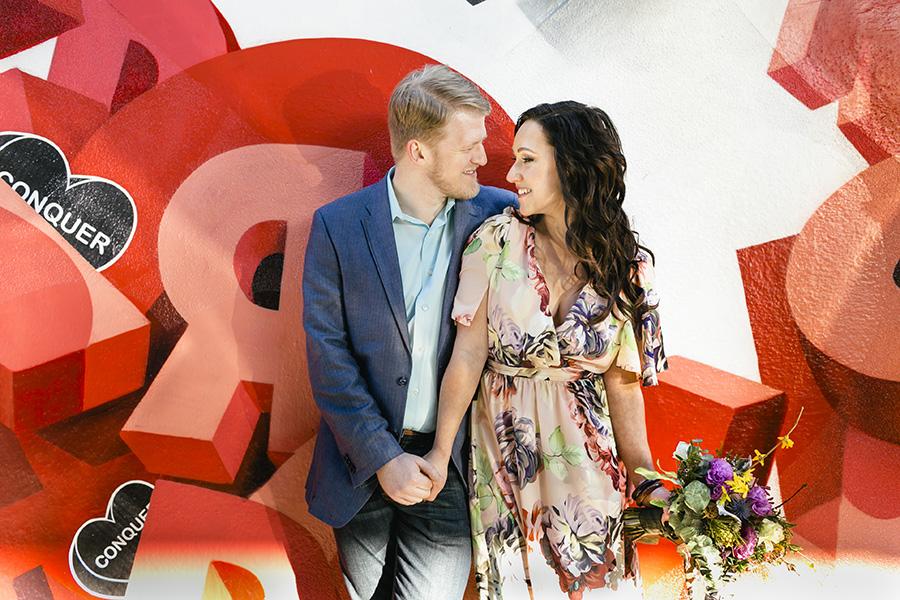 “The proposal could not have been more perfect for me. On Black Friday I was in Queens with my family and was under the impression Ricky was in Connecticut doing the same. We had planned a family dumpling crawl, a pretty typical activity for us, and my mom insisted we make a stop at our favorite place, Joe’s Shanghai, for xiao long bao (soup dumplings). We have been eating there since I was 7 years old, I even had elementary school birthday parties there. Once we sat down our waiter was acting strange and quickly brought out the bamboo steamer that typically contains the dumplings. A cabbage leaf was staring at me and everyone was telling me I had to unwrap it. Earlier in the day I was in a feisty mood and kept pranking everyone and assumed this mystery cabbage was some sort of much-deserved trick. Even when the waiter lost patience and removed the cabbage to reveal an engraved jewelry box I still wasn’t getting it. It wasn’t until I heard Ricky’s voice directly behind me (he had been hiding in the men’s bathroom for an unreasonably long time) that I realized what was happening. He got down on one knee and said some very sweet things, the restaurant cheered, I was in shock for a while, and then we drank champagne and ate my favorite dumplings.” 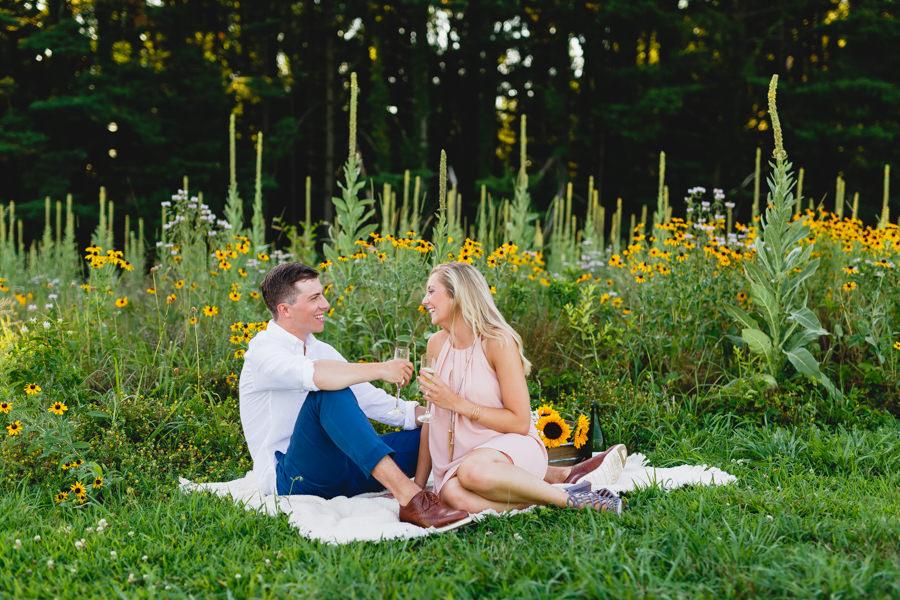 “On New Years Day, Josh and I had planned on going to Philadelphia for the Mummers parade and then to Parc for an early dinner reservation. After dinner, Josh said he wanted to go check out a new bar he heard of that was a couple blocks away. As we were walking towards what I thought was the bar, we came up to Addison Street, which if anyone hasn’t been before, it’s a brick stone block lined with Christmas lights all year round! It was beautiful, and Josh proposed. Of course, I said yes! The Day was full of surprises including my best friend taking some quick pictures of the engagement, but it didn’t stop there. Afterward, he had planned a surprise engagement party at his parents’ house, I thought we were just meeting our families to celebrate but when I opened the door we were met by over 100 of our closest family and friends and partied the night away! it was a perfect night, to say the least.” 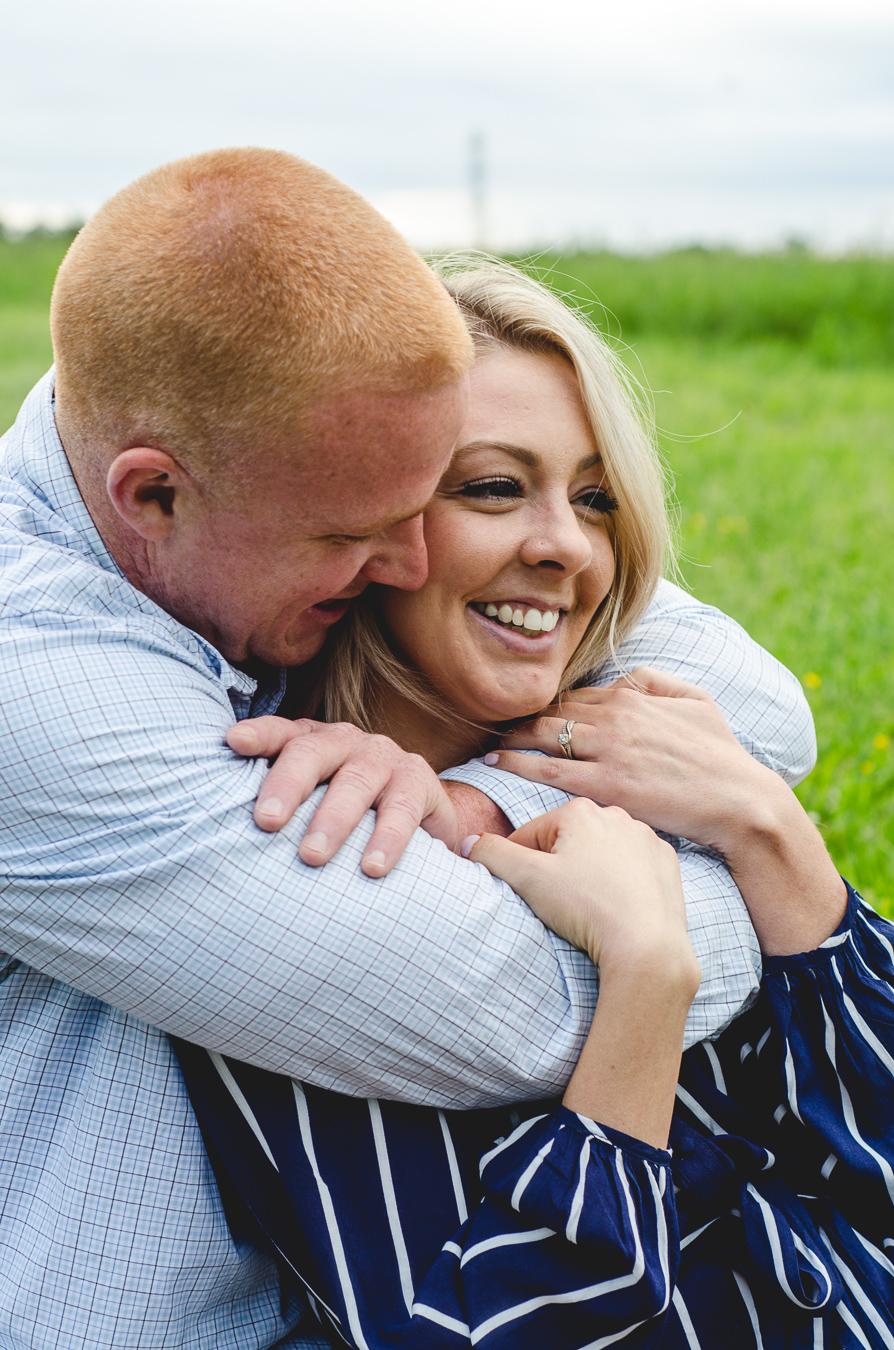 “He proposed on Christmas Eve at my sister’s house before church. My sister was pregnant with her 2nd child and told me she got a cake to surprise us with the baby reveal. She made me stand in front of the cake with my eyes closed while she opened up the box. When I opened my eyes there was a stick figure with red hair on the cake and it said “babe will you marry me” on it. I was confused for a minute until I looked to my left and Jimmy was getting down on one knee with a ring. I totally lost it and the tears started flowing. It was the best moment of my life. I felt like I was floating.” 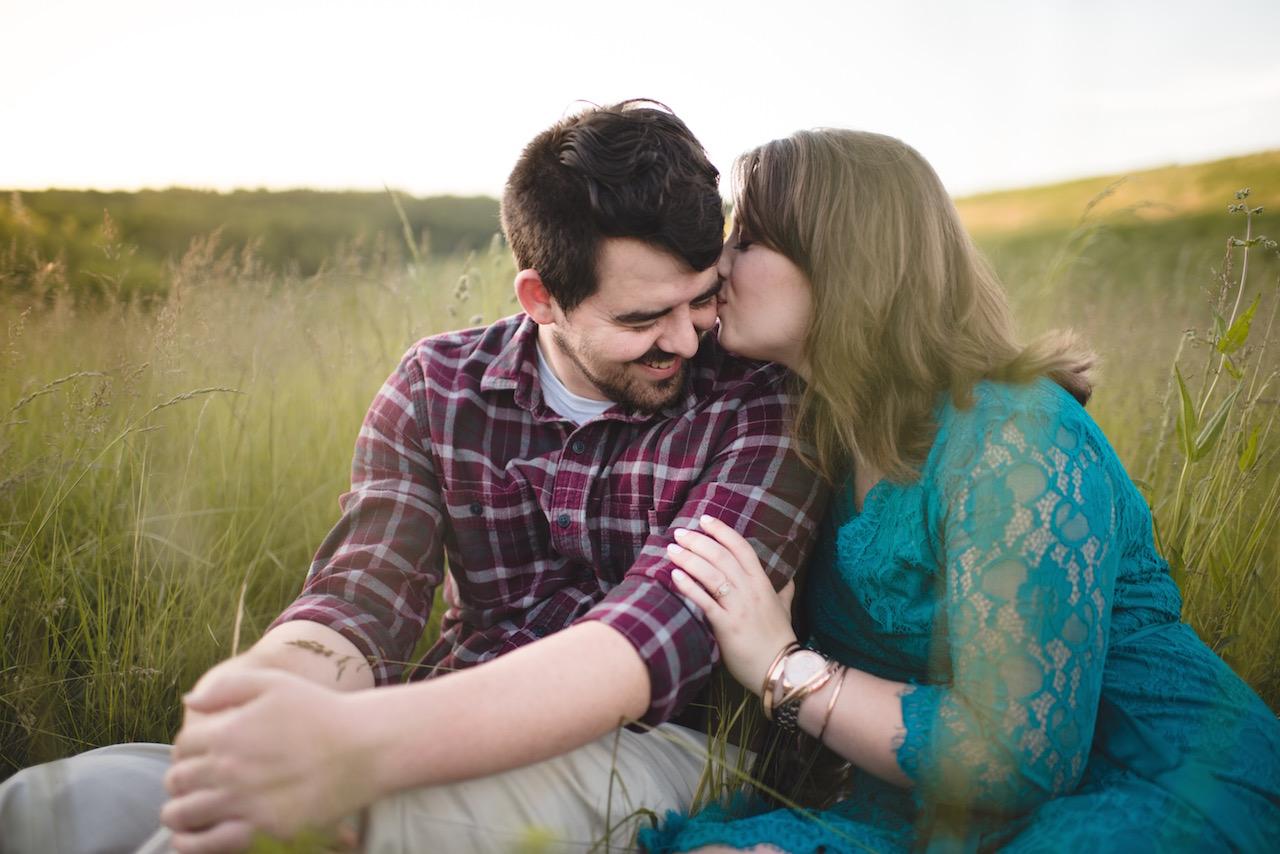 “Wesley proposed to me through a scavenger hunt run by like 15 of our closest friends. I would receive a clue about a location around Harrisonburg, VA and Eastern Mennonite University that meant a lot to us or was significant in our story of getting together. One of our friends was driving me around, and when I figured out where the clues pointed me to, we’d go and there would be other friends of Wesley and I waiting to read the next clue to me. There were seven or eight locations, the last of which was a lake in West Virginia, where Wesley had prepared a huge pizza party and was waiting on a blanket for me. When I approached him he had a photo album with pictures from various points in our relationship arranged chronologically. When we reached the most recent photo, he looked at me and said, “What do you think comes next.” Then he popped the question. After that, we ate pizza and swam in the lake with all of our friends. It was really wonderful.” 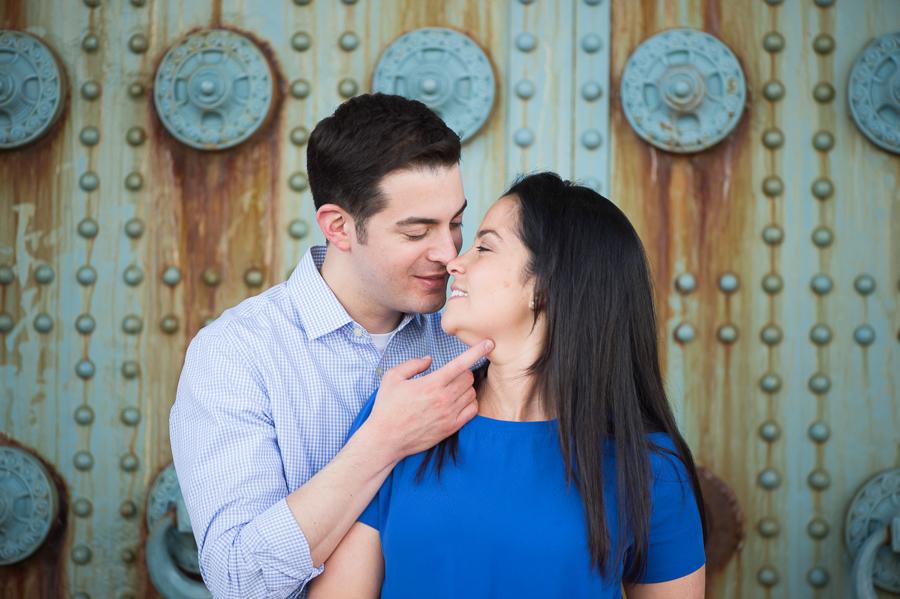 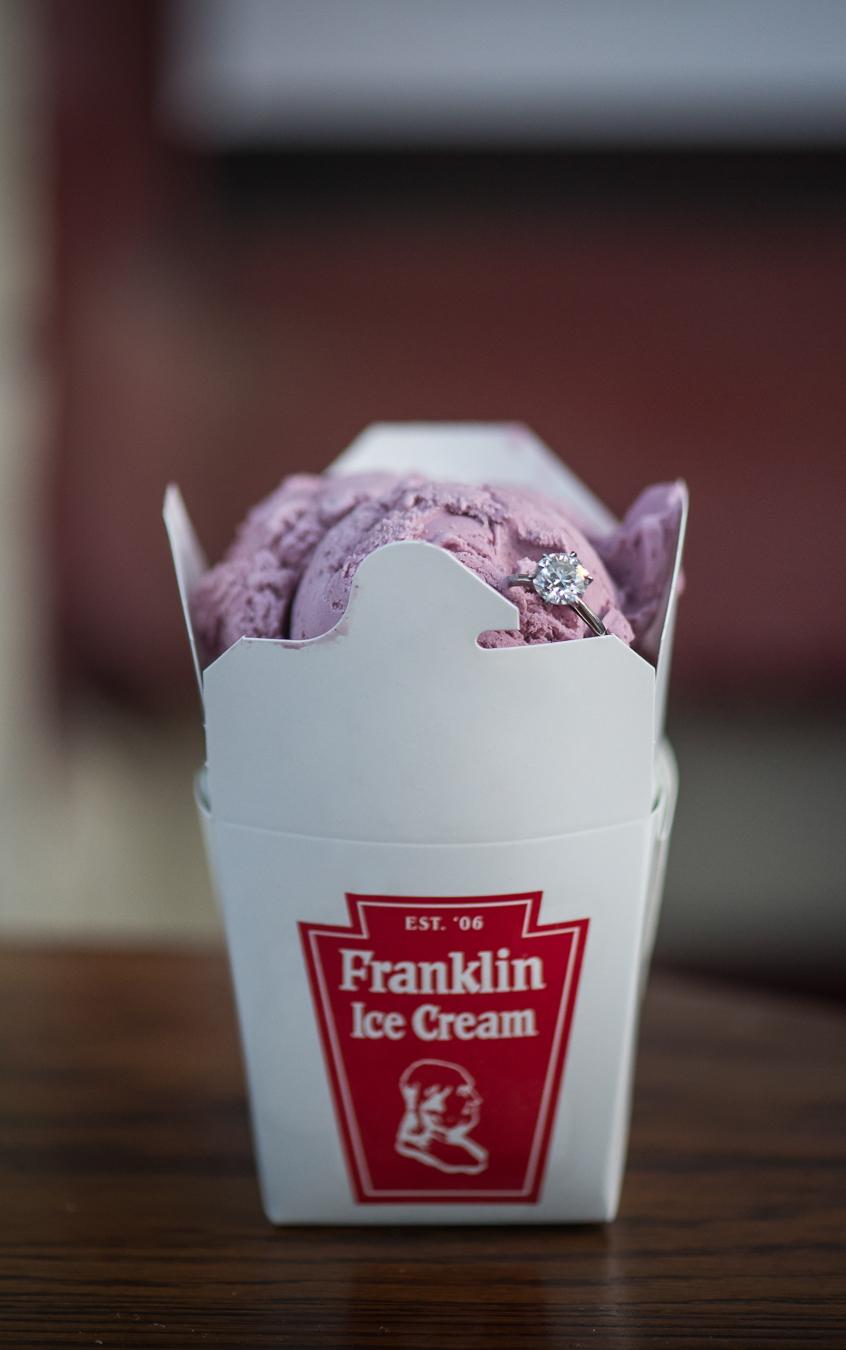 Michael: “I had a secret plan in place from the start. Late in the morning, I texted Aimee and told her that I was able to make reservations at Vetri, one of the top restaurants in the city (and on the Philly Magazine Top 50 list of places that we were trying to visit). I really didn’t have a reservation, but I wanted her to think that I did. So I had my secretary at work pose as a hostess from the restaurant, and call the home phone to leave a message on the machine to confirm the reservation. I knew Aimee would hear it because she was off from work. I was a nervous wreck all afternoon at work but tried to play it cool. After work, I came home to clean up and we walked from our condo down South Broad Street toward the restaurant. I was sweating the entire time, not just hoping that she couldn’t feel the ring case in my pocket, but also because I was leading her a little bit out of the way. Once we got to Walnut Street, we crossed Broad Street, with my co-worker secretly waiting at the corner to take photos, I brought Aimee up onto the median of the street to propose with City Hall in the background. After the proposal, we took a short ride to Bistro Romano, one of our favorite restaurants, for dinner, where I surprised her with our families waiting to celebrate.”

Aimee: “Since we’ve frequented a lot of the Philly Top 50 restaurants when Michael told me he snagged a reservation “hookup” to Vetri I didn’t think anything of it. We had a voicemail from the restaurant confirming the restaurant which was totally normal. When he got home from work I pressed being on time and having to get our Uber. I was shocked when he wanted to walk (I’m the Septa gal/walker while he prefers Uber). He led the way, which I hate since I prefer to weave. Little did I know our destination wasn’t Vetri and the center of Broad Street at Walnut instead. He started rambling, got down on his knee, and proposed.” 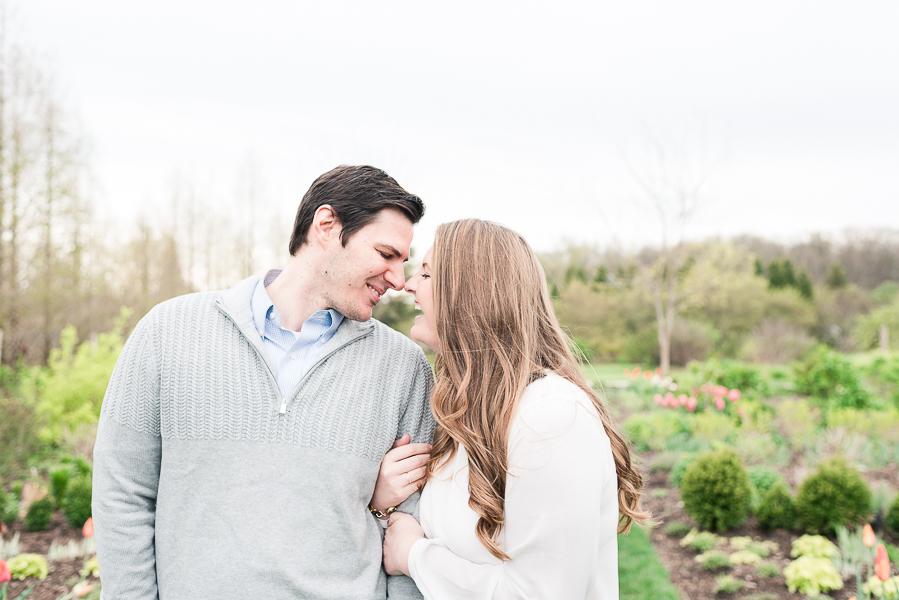 “When the timing was right, John asked both his parents and Amanda’s parents for their blessing, something that still makes Amanda tear up!! (Oh my goodness – how sweet??!!) It was really important to both of them that their parents were on board, and fully supported them. John had started planning and was busy picking out rings, all unbeknownst to Amanda who was busy looking at houses and figuring out their next move. It came as no surprise to Amanda when John suggested an escape to Cape May in August after a summer jam-packed with parties, weddings and overflowing weekends.

At first, she was excited about the trip, but as the date approached, it took a little more convincing. Unexpectedly they both wouldn’t get out of work until late that Friday, the weather forecast was iffy, and who was going to watch Breyer (the spoiled rotten labradoodle)? All of these unknowns were putting the weekend in jeopardy, not to mention the looming weather report for the sandy beach proposal John had planned. But, somehow, someway, the stars aligned and John got Amanda in the car, and on the way to their weekend excursion!!

First stop, Willow Creek Winery, a place that they had visited numerous times with family and friends! Amanda and John love the wine and the food there (just ask them about it!) but above all else, they love the atmosphere. Acre after acre of grape vines, where guests are encouraged to grab a bottle and sit on an Adirondack chair, taking in the smells of summer and enjoying all the beauty the grounds have to offer. They would describe it as feeling like you’ve been transported to a vineyard in some far off country, their little oasis among the coastal sandy shores. Where the sunsets are always beautiful and the wine is always flowing. So, throwing the beach plans aside, it seemed fitting that this would be the place for John to propose!!

With the ring precariously placed in his pocket, John suggested a stroll through the vineyard. Not for a second did Amanda think that this beautiful, serene, perfect place was about to become one of the most meaningful moments of their lives!

While they were walking among the rows, John couldn’t help but recall the infamous softball date, and how much they had grown together since then. He knew they were meant to have found each other, and he wanted his best friend to become his wife. Amanda didn’t even realize what was happening until John was fully on one knee, holding a ring up and asking her to marry him. She was so completely overcome with emotion that she forgot to say yes and went right to kissing/crying and burrowed into Johns’ arms. She didn’t have any words, and they spent the next moments wrapped up in each other!!!

And that is exactly what it was, the perfect moment. In a space that was so close to John and Amanda, and in an intimate setting where they were able to focus on each other. In their eyes, it was about as close to perfect as you can get, and Amanda did eventually say YES! The rush of love and support from friends and family following the engagement was overwhelming, only to be surpassed by the amount of love they feel for each other as they move to the next stage of their relationship.”