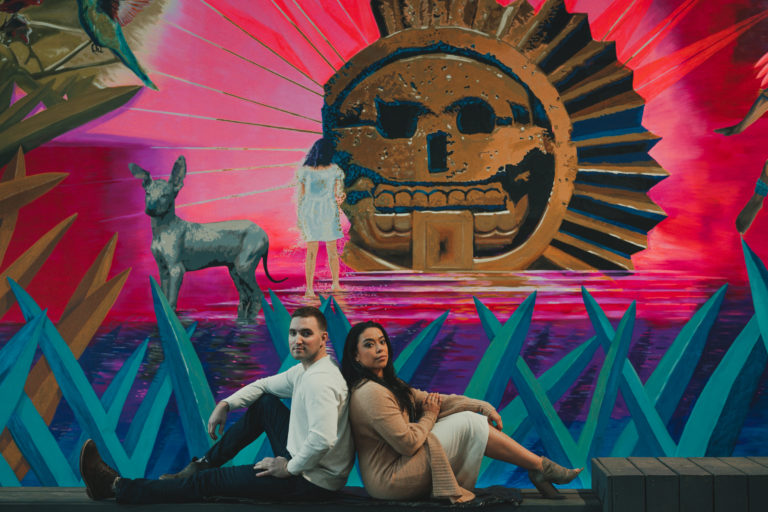 “It was the Holiday season of 2013, the week between Christmas and New Year’s, that I first laid my eyes on the woman I’d eventually call my wife. I had just one week until I left for boot camp for the United States Marine Corps when my best friend and I decided to head downtown to Roxxy nightclub. Trying to clear my head and enjoy myself before beginning my military career, I most certainly wasn’t searching for a love that night. I was standing on the edge of the dance floor, when I noticed the most beautiful girl I’ve ever seen, laughing and dancing with her friend.

Somehow, I developed the courage to make my way to her to ask her for a dance. Sadly, I was turned down. She smiled and politely said she was just there to dance with her friend. Relentlessly, I went back again, trying to get just a second of this woman’s time. Finally, she gave in and had a conversation with me. We talked, we laughed, and I got a hug that melted my heart. That’s when I decided to ask for her phone number.  Sadly, I was denied again! The proud woman she was, she told me that she does not like to give her number out to random people. However, like before, I was relentless because I could not let this one slip away. Once again, she gave in and decided to give me her Facebook information. She told me, if I remembered to message her the next day, she’d give me her number. “

“The next day might as well have been Christmas morning again, because I woke up like a giddy little kid and messaged her, asking if I did enough to earn her phone number. I was out to lunch the next day with the same friend I brought to the club, talking about the girl who stole my heart when the message finally came. She gave me her number!  Immediately, I sent her a text, then another, and another, until before you know it, we were texting all day. That’s when I dropped the news. I told her that I’d be leaving in one week for the next three months to become a Marine and all I wanted to do before I left was take her out on a date.

It was New Year’s Day, Jan. 1, 2014, that I fell head over heels in love with Karina.  We went on our first date that night at a small Italian restaurant near her house which was one of the only places open for the holiday. We talked all night, about life, family, goals, friends, school, everything. I was in awe of her smile, laugh, and even the way she talked.  This was truly the most amazing feeling I’ve ever experienced. We began to notice the employees cleaning up around us when we realized we must have been in the restaurant for three hours and still had full plates of food. After getting kicked out for closing time, we moved the conversation to the car to share some more laughs. Then it was time to drive her home. We pulled up to the house and I could feel the butterflies in my stomach. I was going to kiss her goodbye. We got out of the car, I walked her to the driveway and awkwardly made my move. Sadly, I have turned down ONCE AGAIN! She gave me a hug and told me she’ll give me a kiss when I got back. That last few days, we talked A LOT. We were falling for each other, after only one date. But I was leaving…”

“January 6, 2014, was the day I left for boot camp with nothing but an address book. Through the worst three months of my entire life, the only light at the end of the tunnel was Karina.  We got to know each other more, we shared more laughs, we shared tears, we told each other we missed each other, entirely through letters. For the first three months of our relationship, all we could do was write. No dates, no flowers, just letters. There was one letter, in particular, that was the most important of them all, and it was sent to my parents.  They had written to me about two months in asking how I was holding up. That’s when I told them about the girl. After explaining how hard it was to get through this, I said there was a girl I met a few days before I left who has been writing to me, and it gives me something to look forward too. I told them I wanted to introduce her to them when I came home after I graduated, which was huge. My mother remembered me telling her that the next time I bring a girl to meet her, she’s going to be very important.

That’s when the impossible happened. My parents took it upon themselves to go through my phone in search of this important girl. They saw she was the last person I texted before shutting my phone off and decided to give her a call. Karina answered in confusion to find out it was my father. My parents wanted to bring Karina, a girl they’ve never met, a girl that their son went on one date with, from Philadelphia to South Carolina to surprise me on my graduation. It was insane!  Karina invited them over to meet her parents. Her amazing family welcomed my parents in with open arms and decided to actually ponder this wild thought. They shared coffee and stories together for hours and came to an agreement.”

“Karina drove 12 hours, in a crowded car, with a family she spoke to for two hours, spent a night in a hotel with them, just to surprise a guy she went on one date with and wrote to for three months.  I will never forget that day. The graduation ceremony for the toughest military boot camp in the world came to an end, parents sprinted to their newly made Marines, wives sobbed on their husbands, girlfriends jumped on their boyfriends. I was searching through the crowd for my family. That’s when I saw my brother, then my father, followed by my sister, my aunt, and my mother.  I hugged them all and then my mom says “I hope you don’t mind, we brought someone else.” She moved to the side, and I saw her. I was in shock. I’ll never forget how vulnerable she looked. She showed all of her emotions in her big brown eyes. Nervous, anxious, excited, scared, happy, and absolutely gorgeous.

We went home and shared an amazing ten days together. We became inseparable, nothing was going to ever break us apart. We met through writing letters, and we felt like we knew all there was to know about each other. It was hard, but I had to leave again for more training. This time I was gone for five more months, but at least we had our phones. We continued to get to know each other through 2-hour phone calls, we got in our first arguments, we learned how to make up, and we never looked back.”

“After my training, I was able to move back home as a reservist. It was all Eric and Karina from that point on.  We took our love story and ran with is. Month after month, year after year, we fell madly in love. After many ups and downs, we never let anything come between us. Karina went on to graduate from Penn State Abington University and began her career as a Registered Behavioral Tech. She works long hours every day helping children on the spectrum live an independent and fulfilled life. I am now a Philadelphia Fire Fighter. Through some of the longest and toughest semesters and workdays, I was there to catch her when she fell and pick her back up. Through some of the longest days in the Fire Academy and ugliest days at work, she’s always there to comfort me and scratch my back until I’d fall asleep. God put us in each other’s life on purpose. I say that with certainty and pride. We are meant to be together.”

“After 5 years of madness and happiness, I decided to pop the question!  I wanted to ask Karina to marry me around the place where it all started.  After a nice dinner date, we took a drive down to Columbus Boulevard and went for a walk down Cherry Street Pier.  I was lucky enough to get a YES from the love of my life under the Ben Franklin Bridge on a beautiful spring evening.  After her friends climbed out of the bushes from sneaking pictures, we went out for drinks to celebrate.  That started the awesome engagement process!  We are beyond excited about planning our wedding and just want it to be a memorable night with our favorite people celebrating our God-given love story.  We are thankful for the opportunity to be in this contest, and hope our story brings heartwarming joy to whomever reads it!”