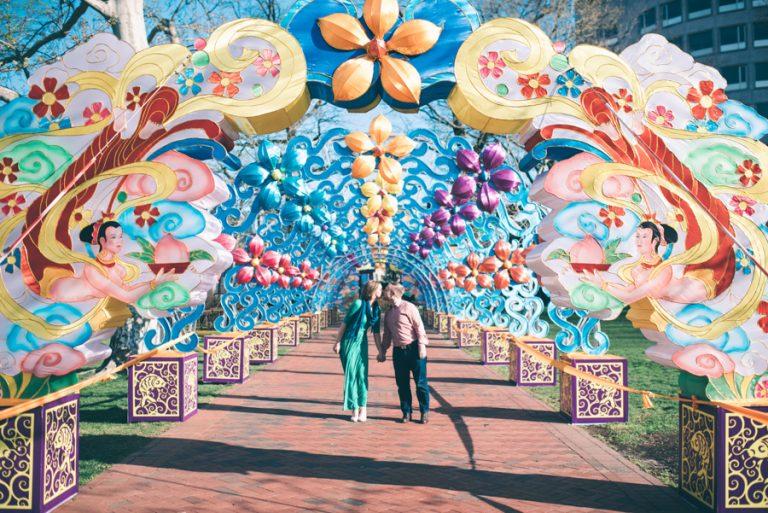 GraceD Photography beautifully photographed Jule and Paul’s engagement photos that exude glee, and gorgeous colorful landscape.  These snapshots display the pure adherence of love that is seemingly present amidst this couple.  Jule and Paul’s visible happiness flourishes into vibrant sensations that are in comparison to their vivid surroundings.  This Philadelphia engagement session truly parades the illustration of blissful scenery, and an adoring couple with a cherishing love tale. 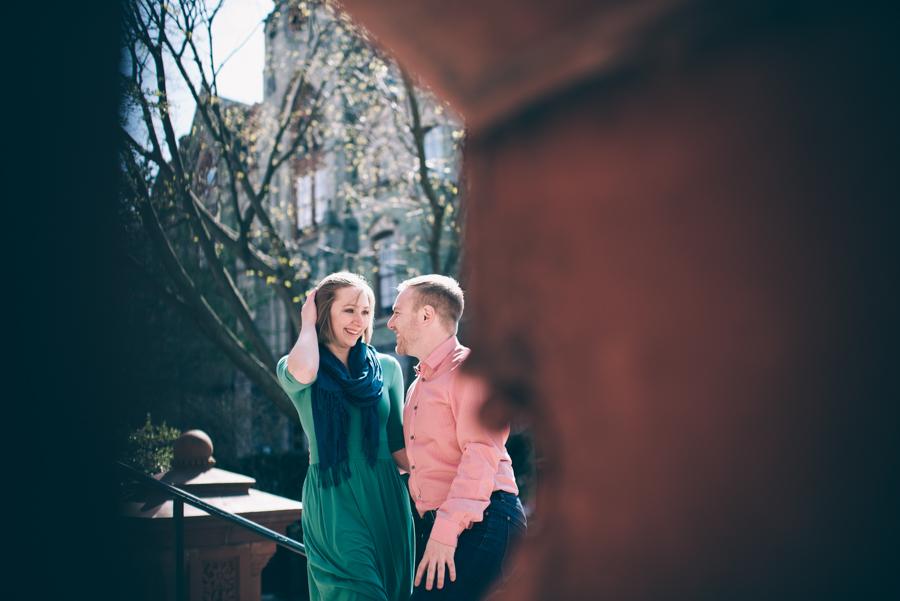 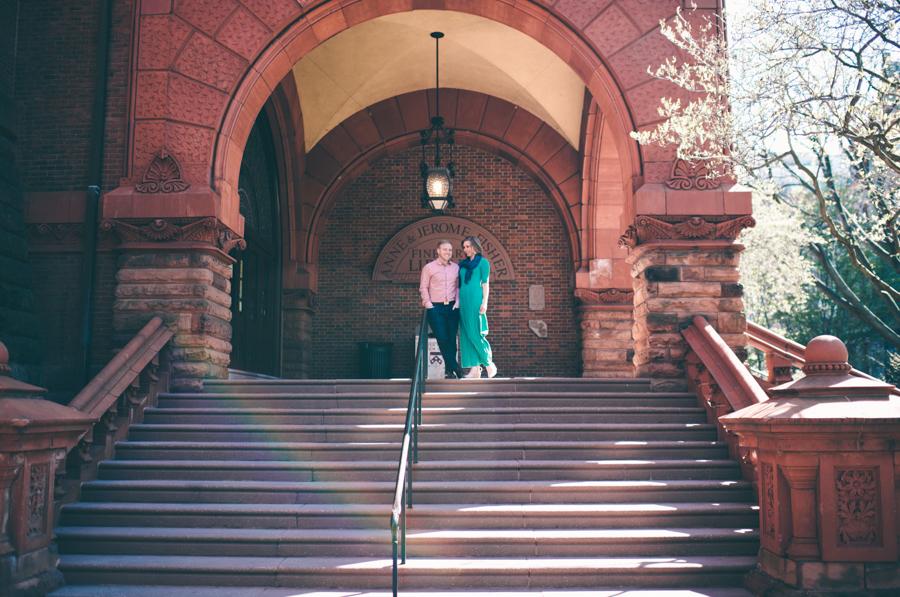 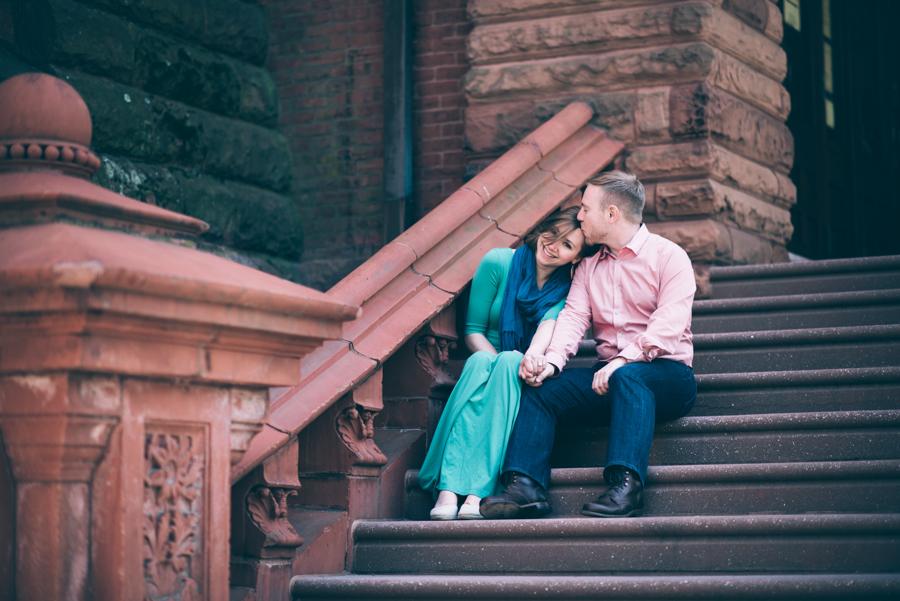 How they met:
“We met through a mutual friend at a party in the summer before our sophomore year of college. He was (and still is) cute, funny, and easy to talk to, but what really set him apart was that he heard I wasn’t feeling very well, and came over and held my hand. It was such a simple gesture, but no one had ever done anything like that before, and here was this guy I didn’t even know reaching out to make me feel better. Also, he had a great car, haha! (1968 Buick Skylark)” 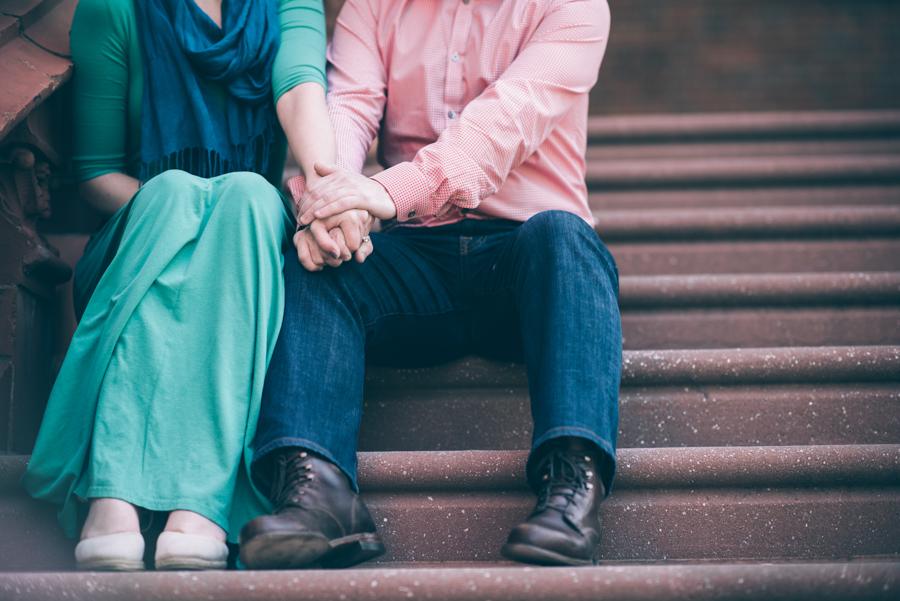 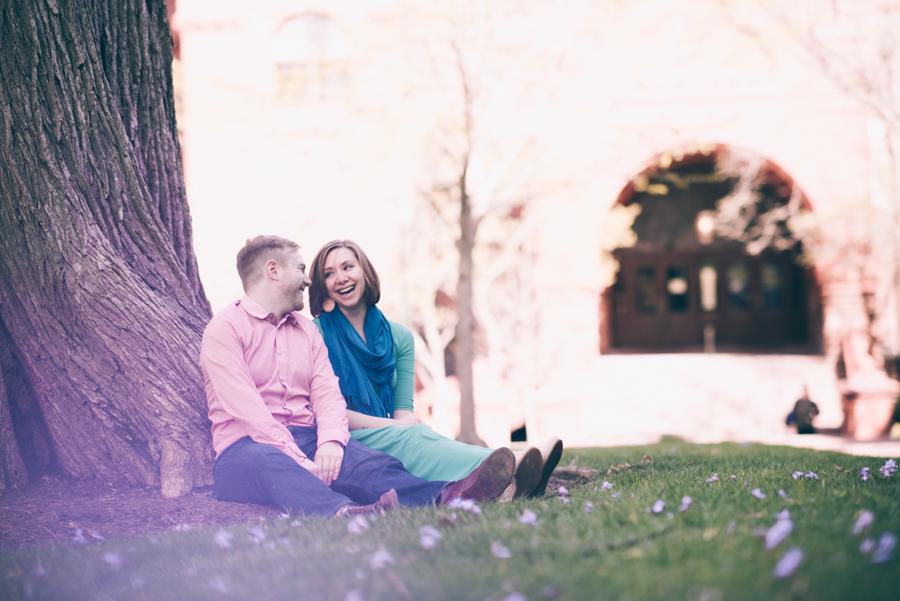 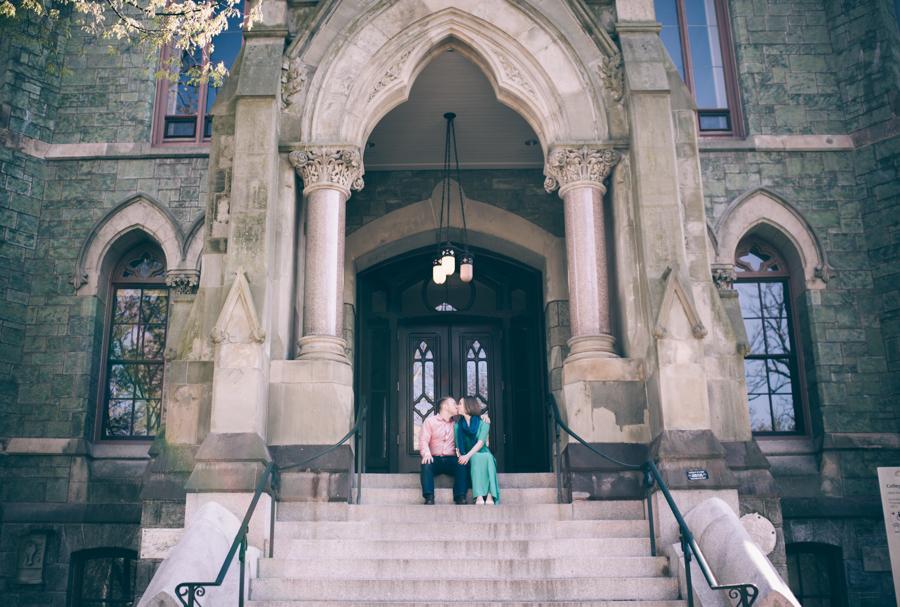 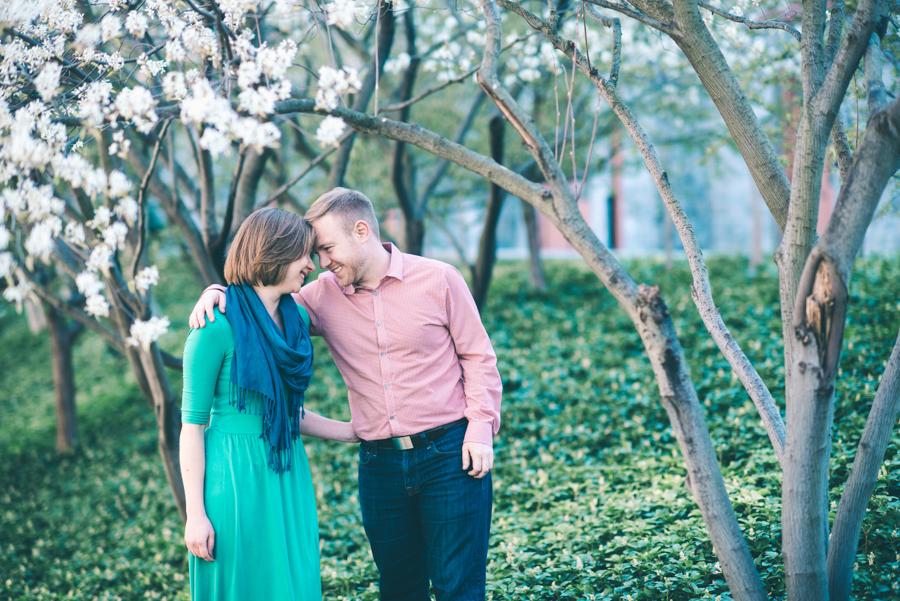 From the Bride-to-be: “Paul has many qualities that I respect and admire, but what I think I love most is that he is not afraid to be silly and to express himself. I can completely be myself around him, and the same goes for him. That level of intimate friendship is extremely valuable to me.” 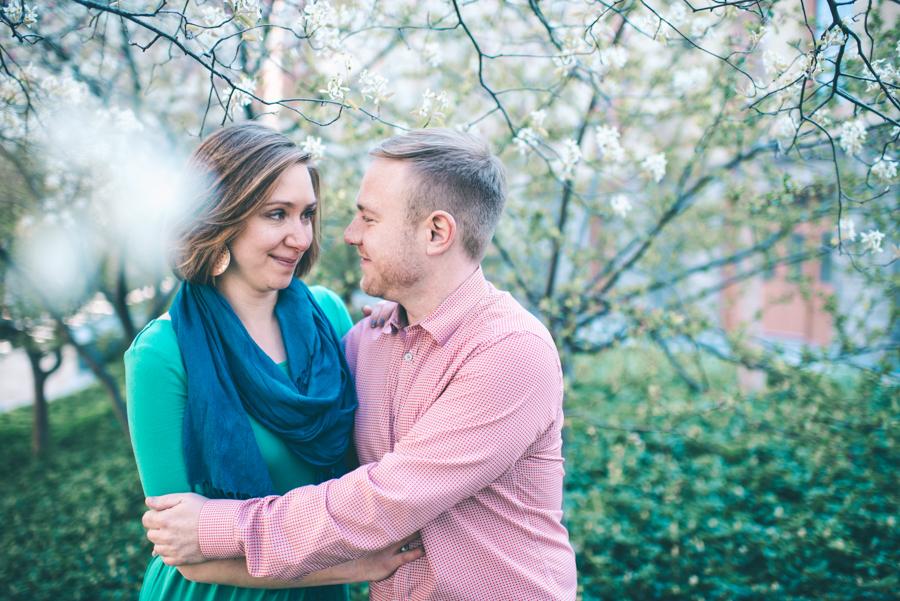 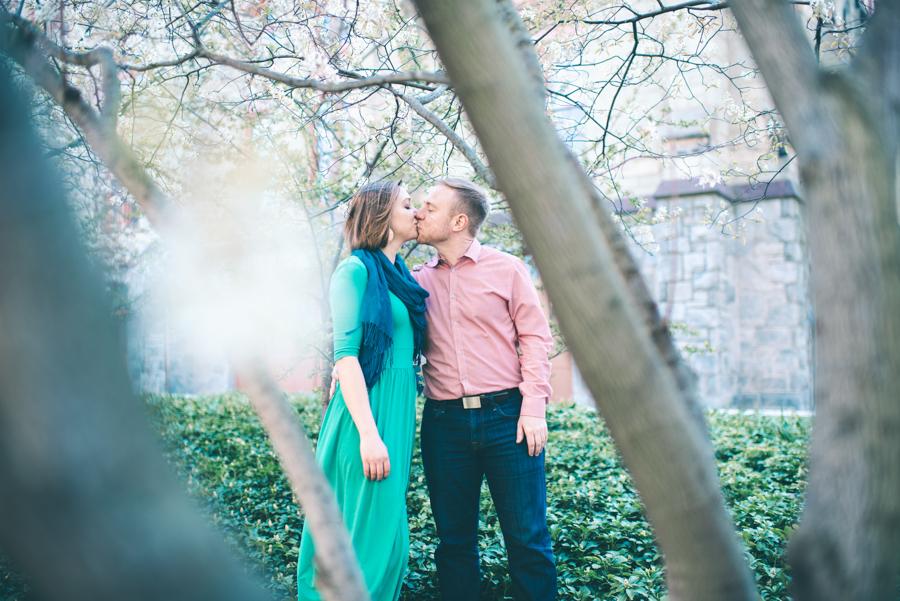 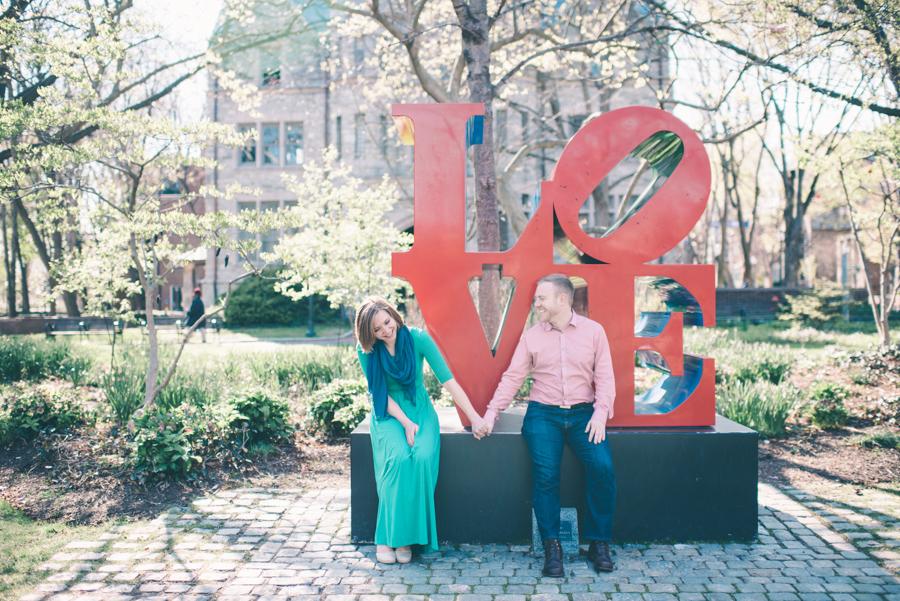 How he proposed:
“His proposal came as a big surprise, even after 10 years of dating! I know that seems hard to believe, but he really took me off guard, and it was wonderful. He had a friend set up a vase of roses and champagne at the top of a historic watchtower near our hometown and convinced them to stay open late just for us. We were the only ones up at the top of the tower surrounded by trees and a beautiful view. It was very special and had a lot of meaning for both of us.” 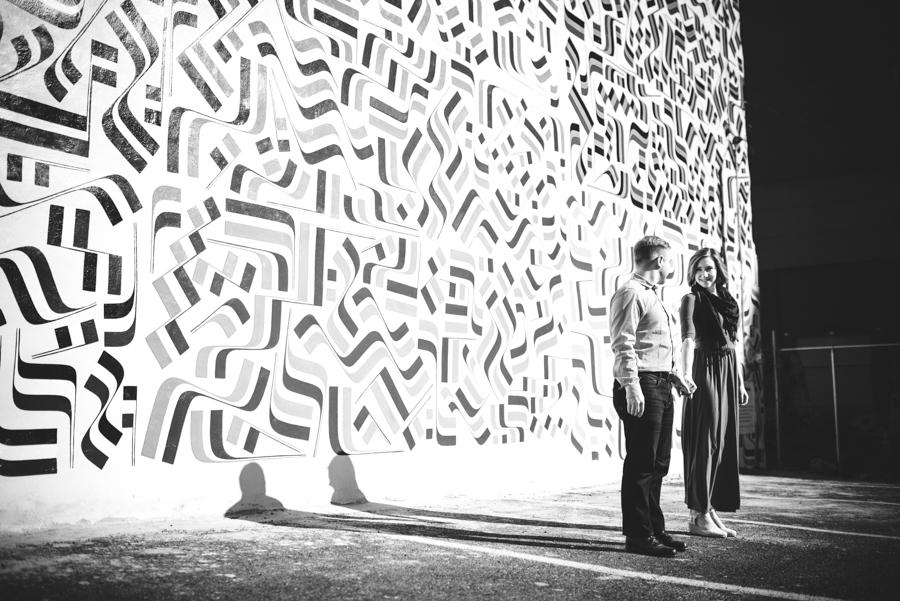 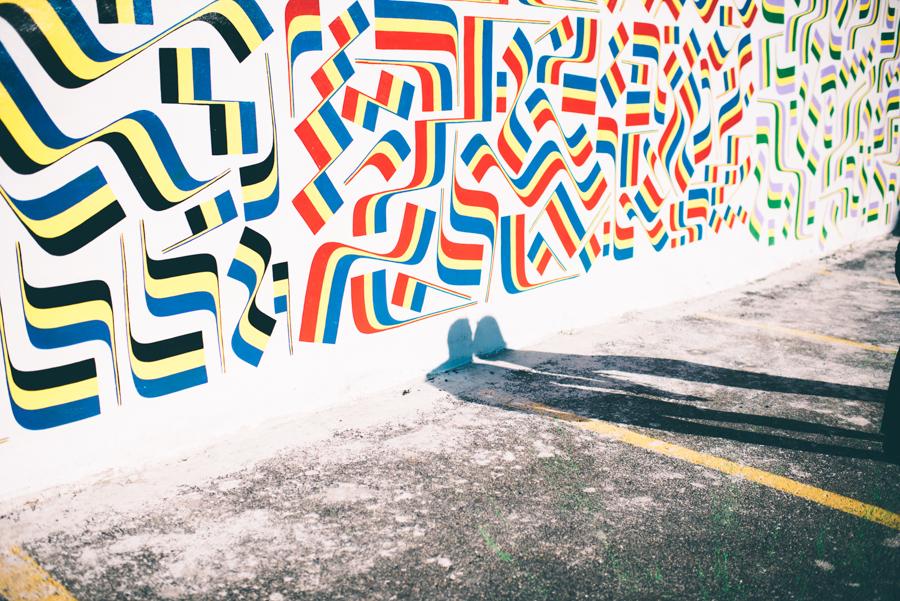 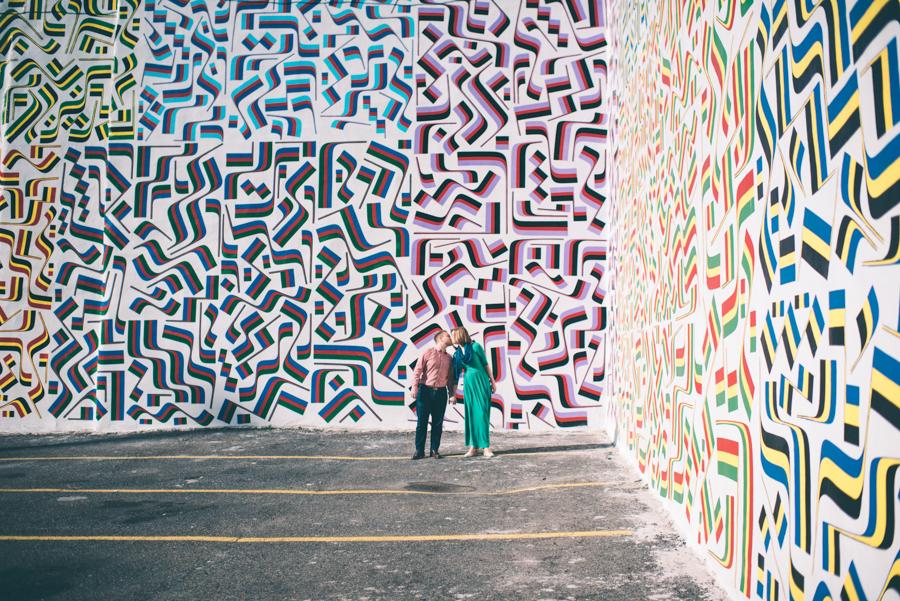 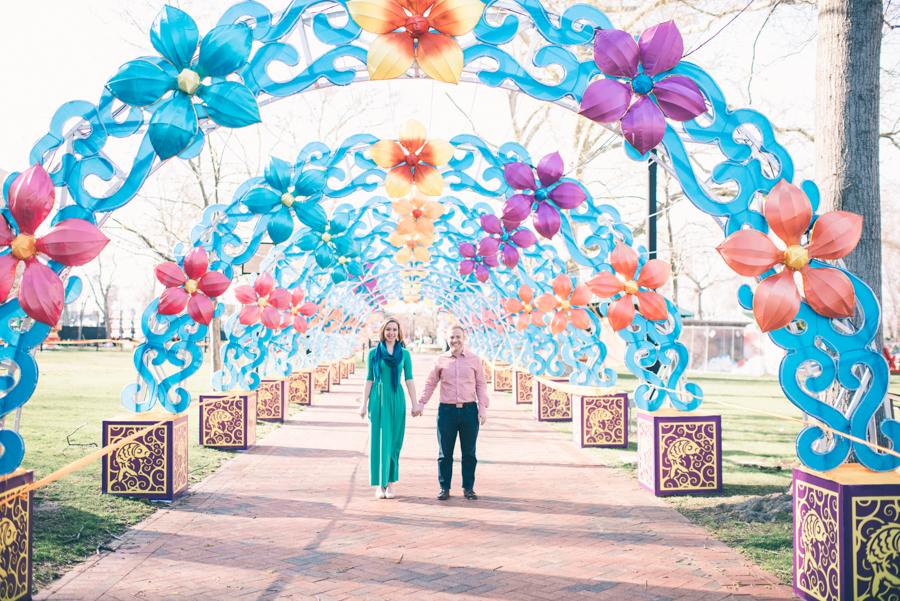 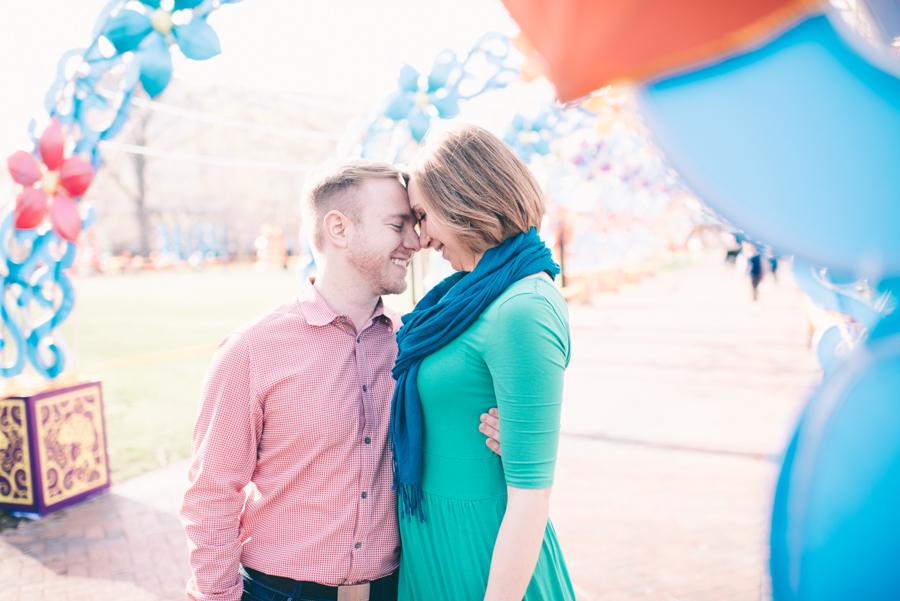 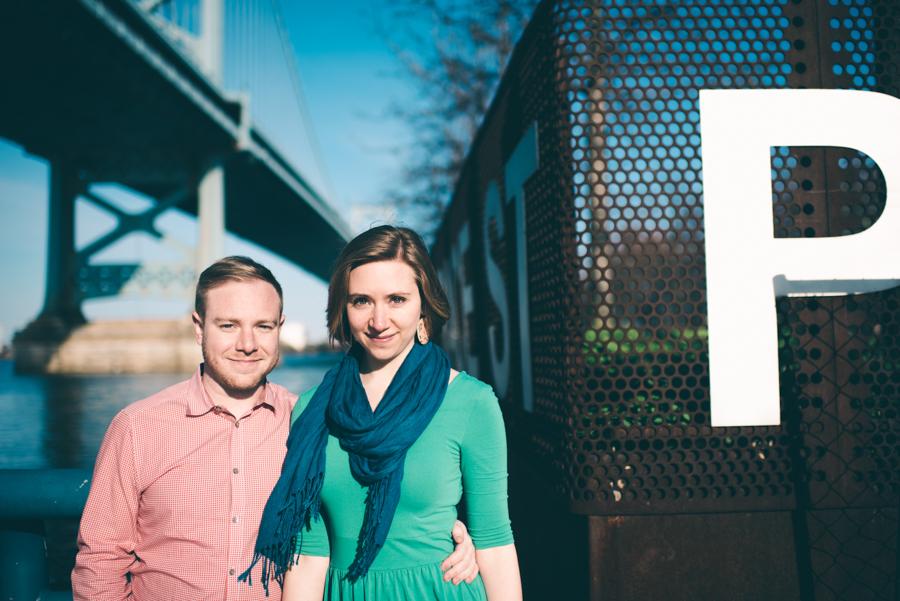 “The inspiration for our engagement session was part-places that meant a lot to us in Philly (we are both Penn grads) and also showcasing some of Philly’s unique beauty. I almost wish we’d had a second day! There is so much that Philadelphia has to offer that ranges from natural, to historic, to urban – we had a hard time narrowing it down! We had planned to be in West Philly and Old City, but then driving between them we came across a really cool mural. Our fabulous photographer Grace D was totally open to making a detour and getting some shots with the mural as background. They are some of my favorite photos from the session.” 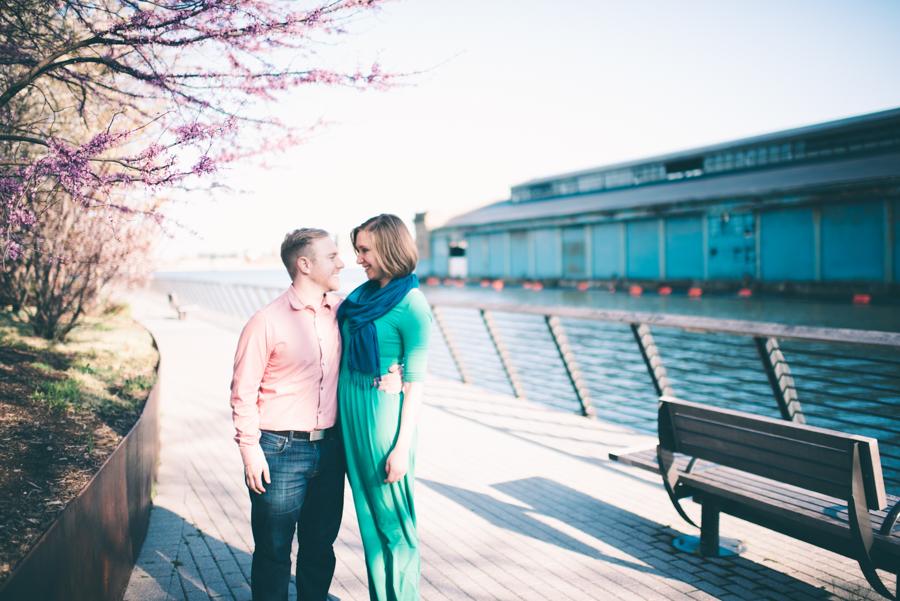 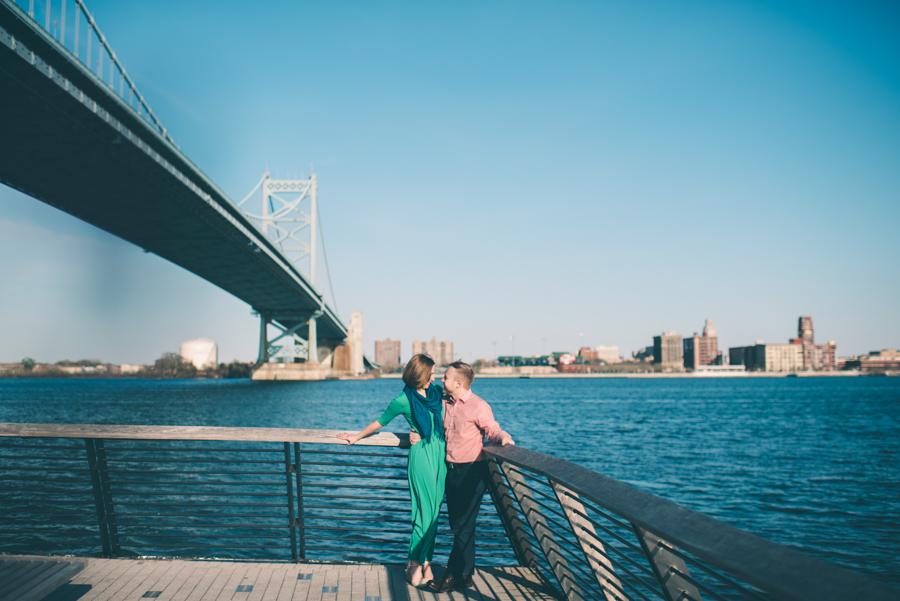 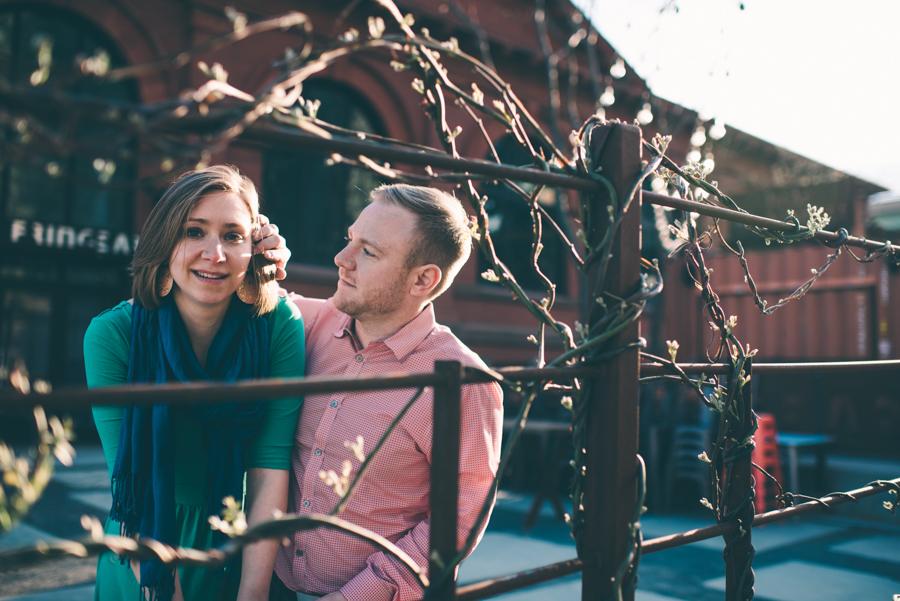 Wedding planning:
“Yes! We are definitely in the thick of wedding planning, as our date is less than two months away. It is a fun but daunting process, especially because there are so many details. I feel like I have a million lists going at once! We are both really excited, though, to share our hard work with our friends and family.” 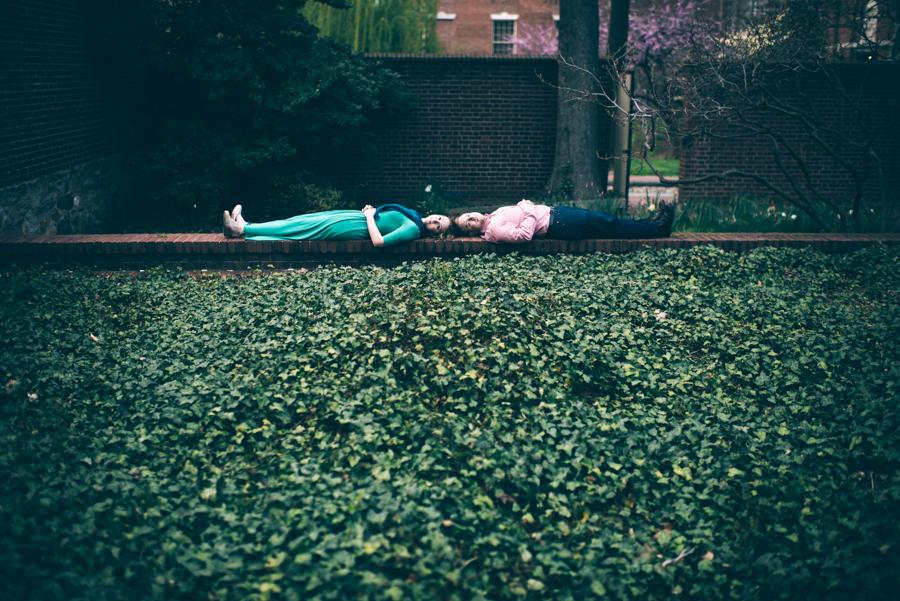 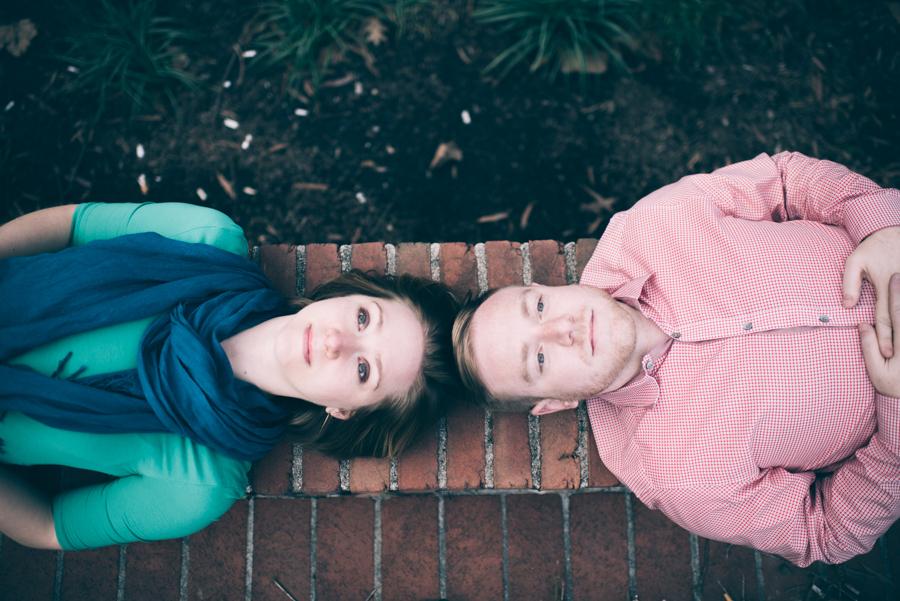 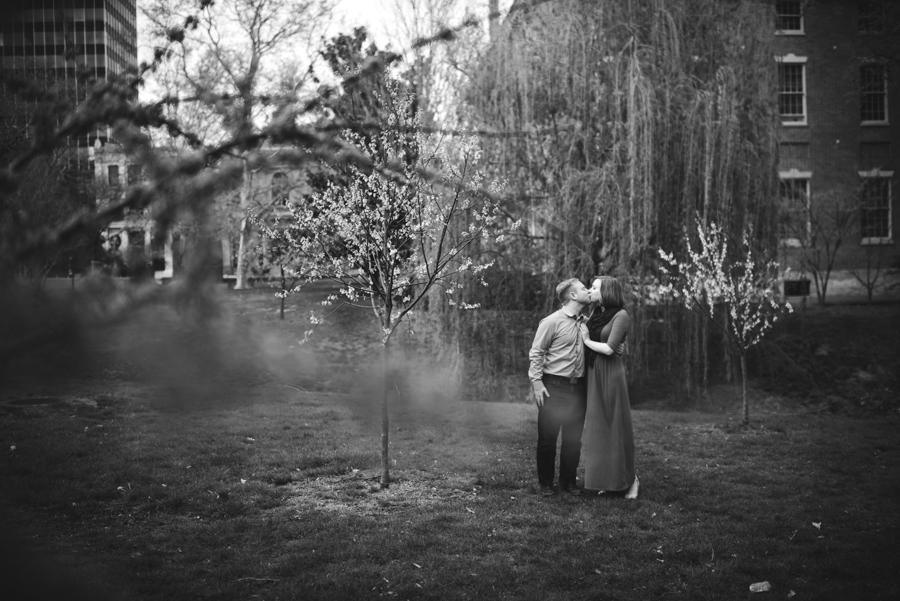 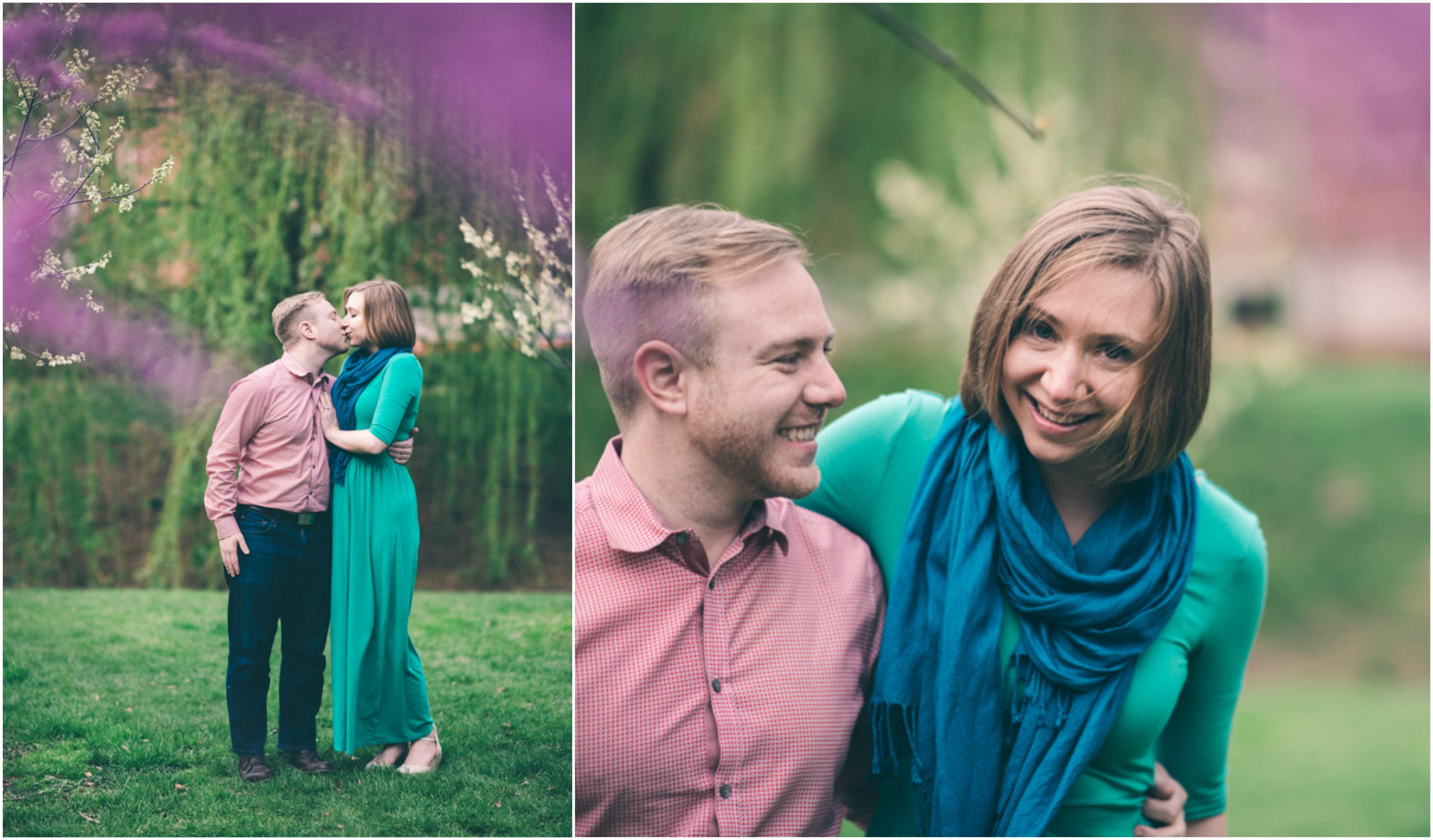 From the Photographer: “Jule and Paul originally first met when the two were still in college at the University of Pennsylvania. It was here that we kicked off their engagement session, in front of one of the couple’s favorite buildings, the Fisher library. After a few photos and laughs, we wandered over to a field full of ivy, tucked not too far from our starting point. The couple waded ankle deep into the ivy for some rich, verdant shots. The ground was a little soggy, but Jule and Paul didn’t sweat it, which of course is my kind of couple!

Afterwards, our ventures took us to Old City, but not before driving by one of my favorite mural-lined parking lots (which just so happened to be mostly empty of cars!!). We pulled over quickly for some colorful captures, and then took another quick stop to Franklin Square, where an equally vibrant setting awaited us. The Philadelphia Chinese Lantern Festival was in the process of getting set up, which made for some bright and unique photos.

The day ended near Race Street Pier, where the trees were blooming and one of my favorite blue buildings lay in the background. We also stopped at Fringe Arts along the way, containing an outdoor beer garden that I’ve been had bookmarked to capture for some time now.

Full of laughs, Philly-centricity and an overall laid-back vibe, the engagement session has me looking forward to Jule and Paul’s wedding in September!”