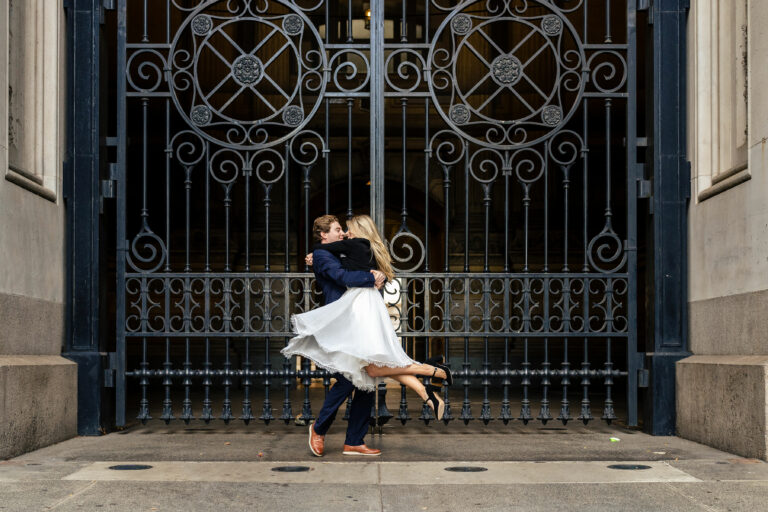 Meet the Couple – Gianna and A.J.

Gianna and A.J. met in Florida while they both were attending a sports academy. The first time they spent time together was on the golf course!

Gianna and A.J. own two long-haired chihuahuas, named Bentley and Frankie. “We’re obsessed,” they confessed to us. They love coming up with nicknames for them, like “Cranky Frankie” or “Bentley James Jr.” and silly songs, too! The pair also loves to play video games, as well as enjoying golfing and skiing together.

When J & J Studios asked Gianna what she loves most about A.J., she absolutely gushed to us all about him!

A.J. asked Gianna to marry him in June of 2021 when the two were on the end of the dock at her parents’ home in Florida.

“I remember knowing he was about to propose because he started walking so fast and far ahead of me toward the end of the dock that I couldn’t even keep up with him!” Gianna told us.

After pacing the dock for a little while, A.J. got on one knee and tearfully proposed. Gianna looked at the gorgeous princess-cut diamond ring with the gold band (exactly what she’d wanted!) and said yes!

A.J. and Gianna have a photo of their actual proposal, because her parents and sister were watching from the windows of her parents’ house. They made sure to capture the moment for this lovely young couple – and we’re sure Gianna and A.J. are so glad that they did!

When we asked A.J. and Gianna what they thought of their experience with J & J Studios, they told us that it was “Amazing. They were so enthusiastic . . . [they even] had the Pinterest board I’d sent pulled up and made sure we got a photo that matched every one on the board. They were excited about our theme and kept coming up with ideas for us, and they told us how to act to make the pictures better!”