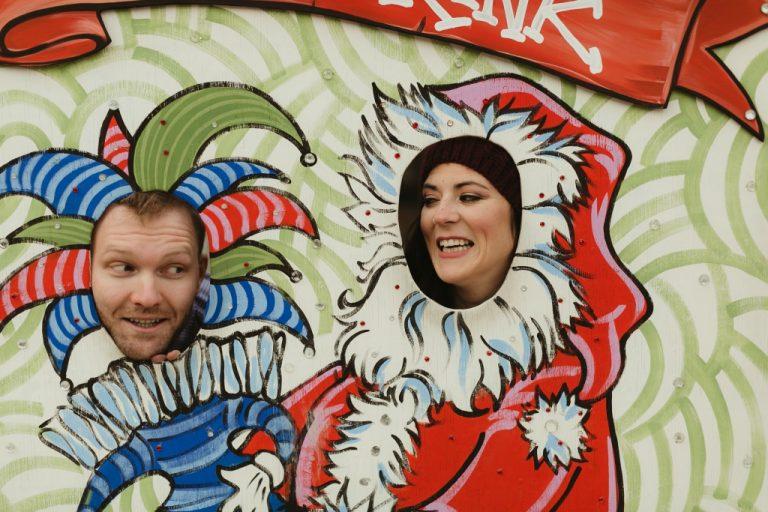 Wintertime at the Blue Cross Riverink is a special wonderland, featuring an enchanting landscape of holiday decor!  This couple’s love for the ice brought them to Philadelphia’s largest ice skating rink for some much-needed fun and merriment.  Dee and Dan are a genuine couple, and their love can be felt through every photograph.  Granted, Magdalena Studios captured every moment these two shared during their escapades by the Delaware River Waterfront.  Keep scrolling to enjoy this festive session that will bring some holiday joy to your day! 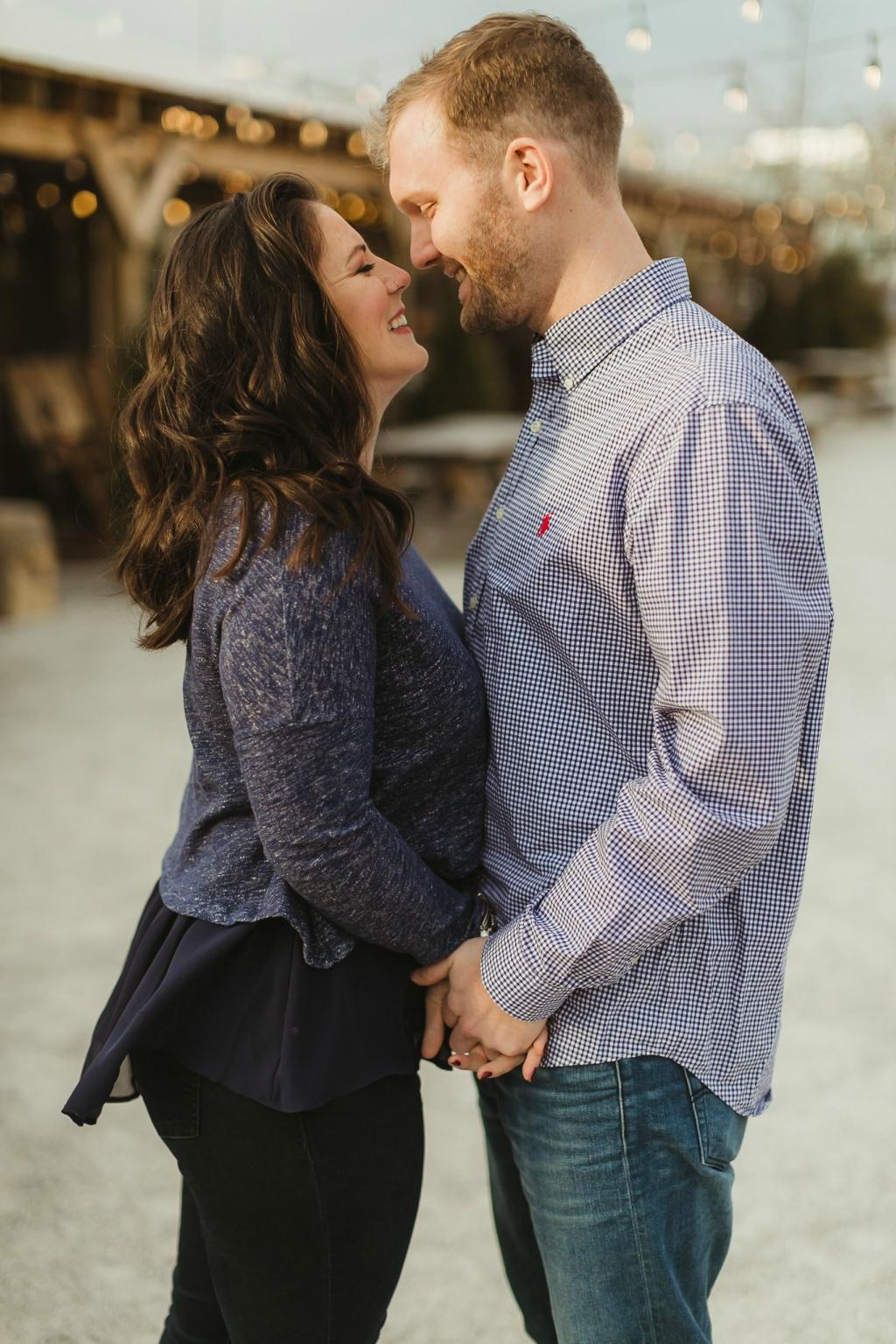 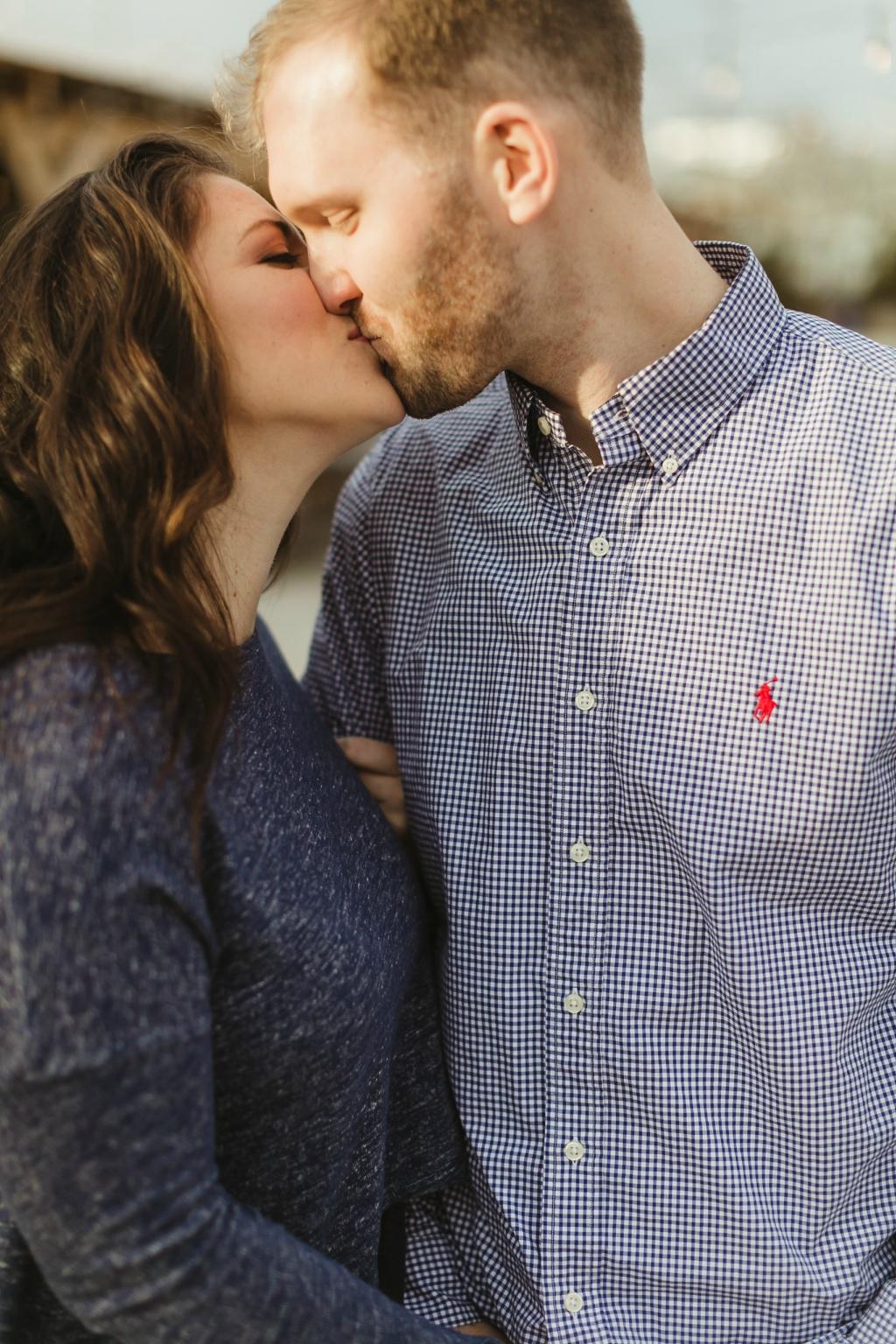 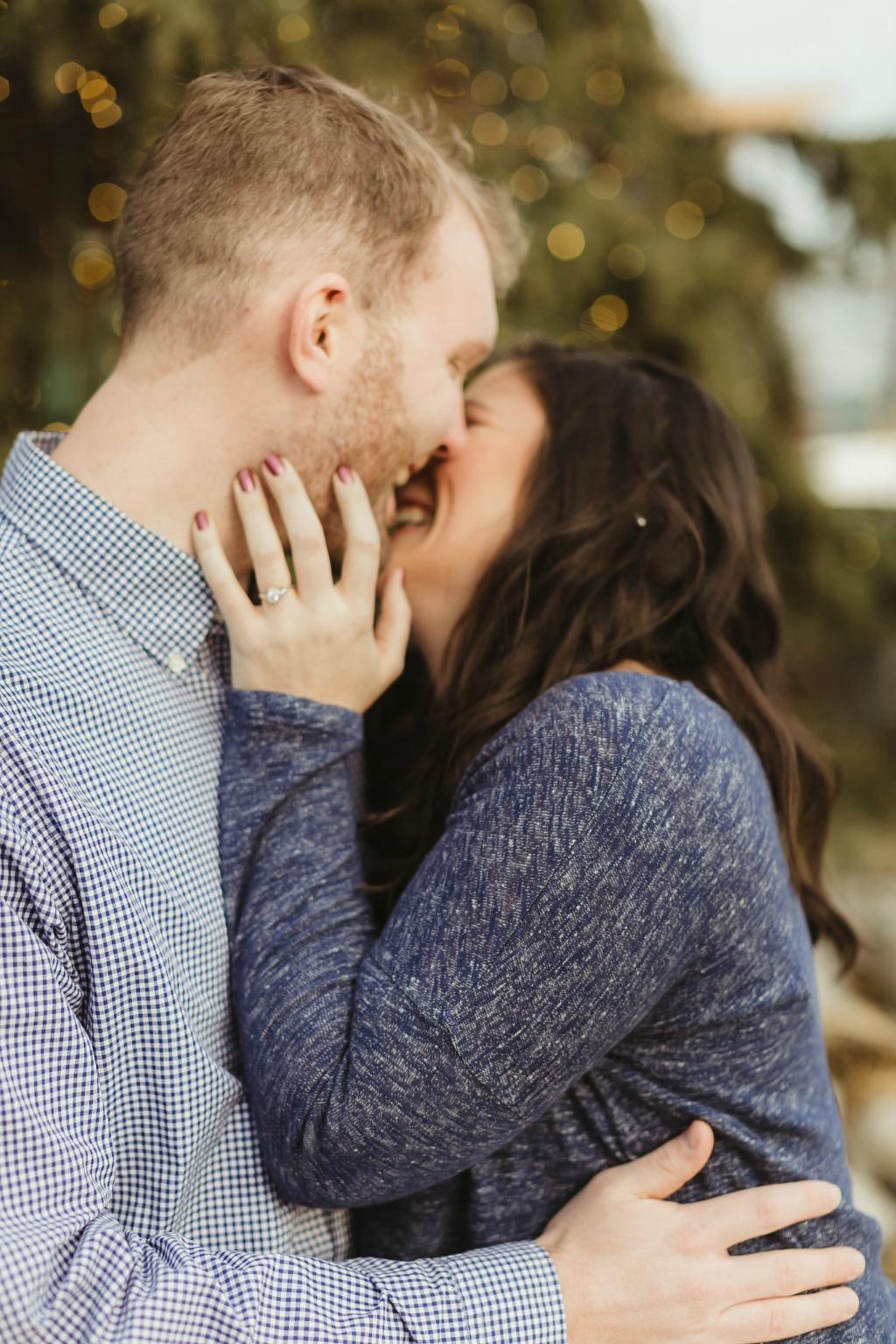 How They Met:
“Dan and I met in OCNJ, my hometown. We both worked at Obadiah’s Seafood Restaurant the summer before my freshman year of college at Rowan University. He is originally from Ridley, PA and vacationed in Ocean City every summer until his family moved down here permanently, so we consider him a fake local. It turned out Dan was a Goalie for Rowan University’s Ice Hockey team and that is where our relationship grew.” 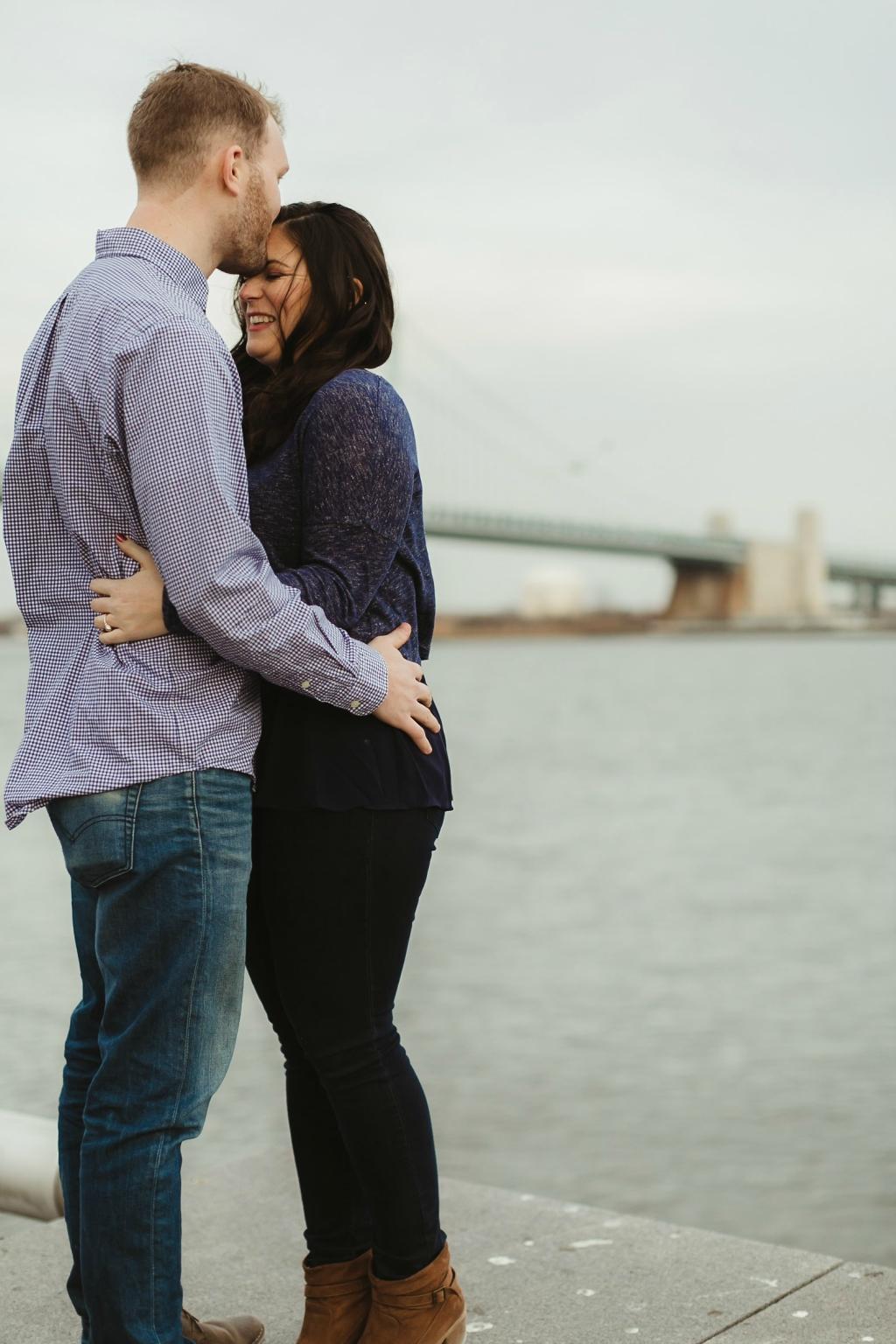 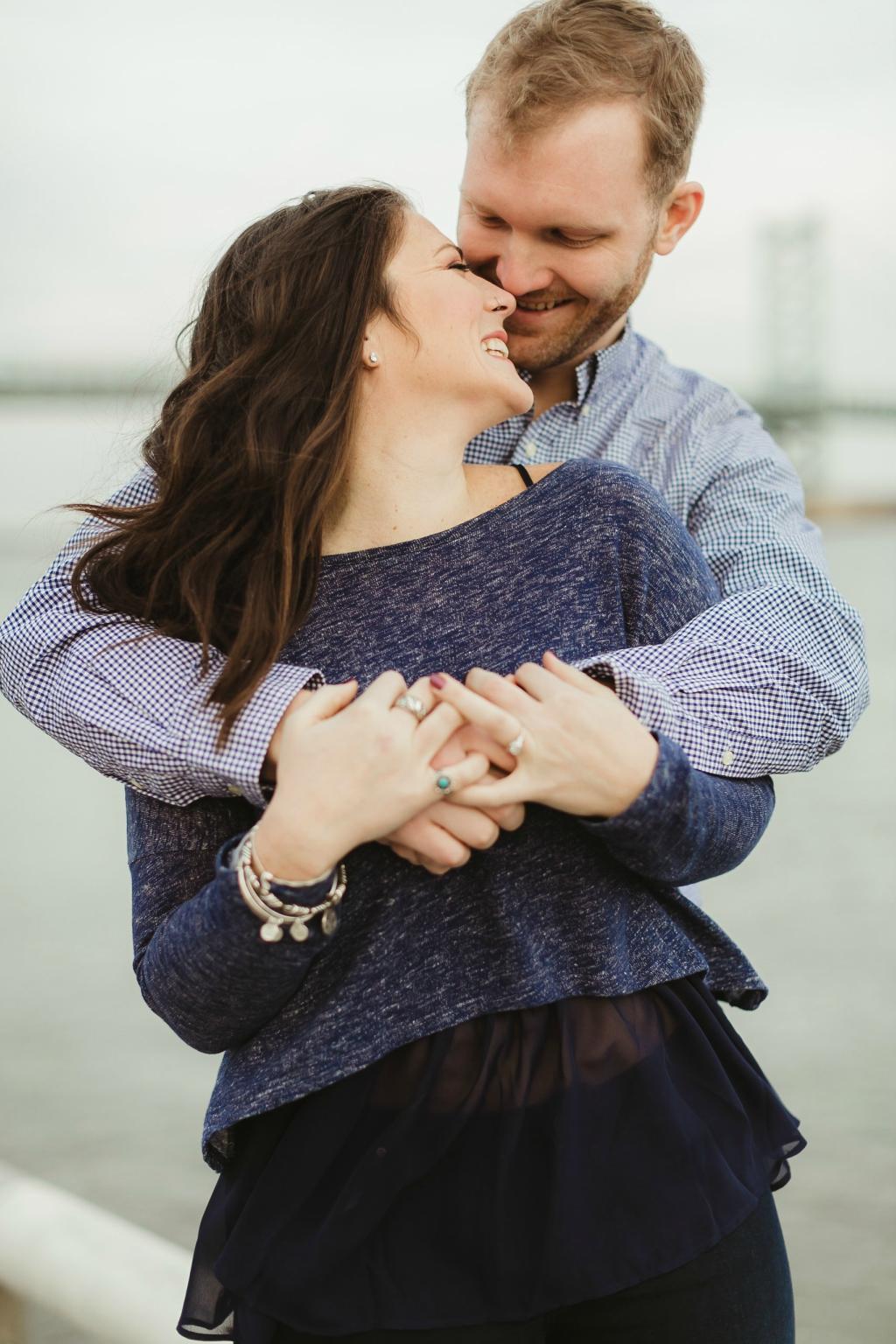 “I love a lot about Dan. I could write paragraph after paragraph. But, I’ll just name a few that really just make me smile. He’s a genuine person. He can turn any comment, question, or concern into a song. He has a crazy eclectic music library and he sings all the songs to me. He is driven. He turned me into a cuddler. So there’s some, but there’s so much more. I can tell you one thing I don’t like about him though, he can’t eat cheese. SMH.” 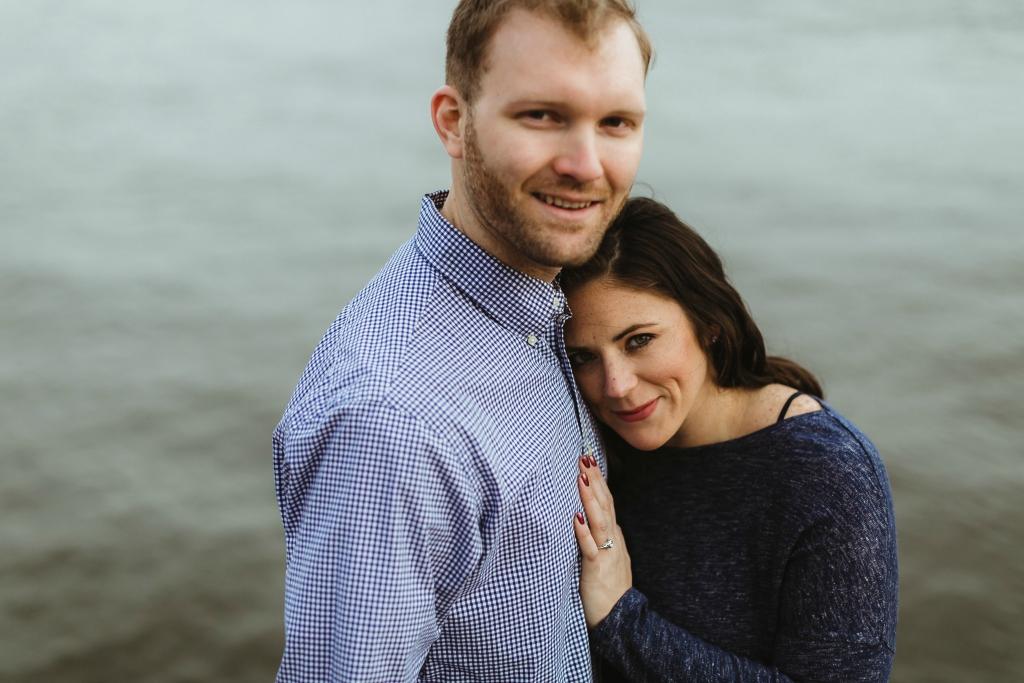 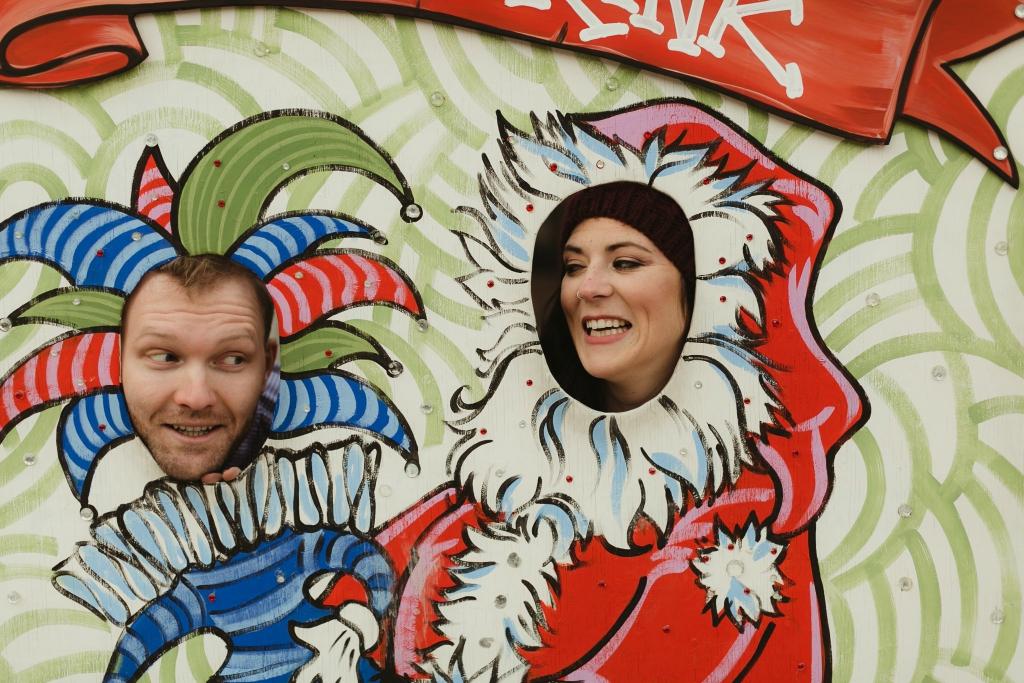 The Proposal:
“Dan proposed on Christmas Eve at my parents annual holiday party. We weren’t “doing” gifts because we had gone to the Eagles/Giants game a couple nights before and that was our gift to each other. So he said he had something small and first gave me a rolling pin (leading up to Christmas he would ask me what I wanted and I would always say a rolling pin because we already spent our money on football). At that point, my sister was crawling on the floor trying to get a picture and I knew it was coming, he got on one knee and I don’t really know what he said after that.” 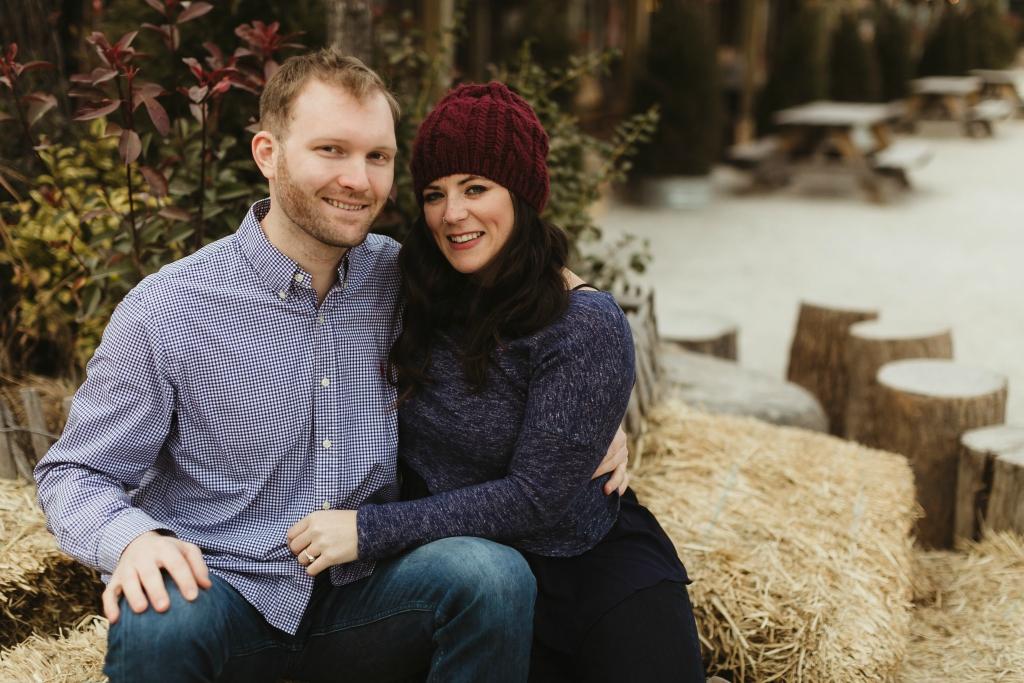 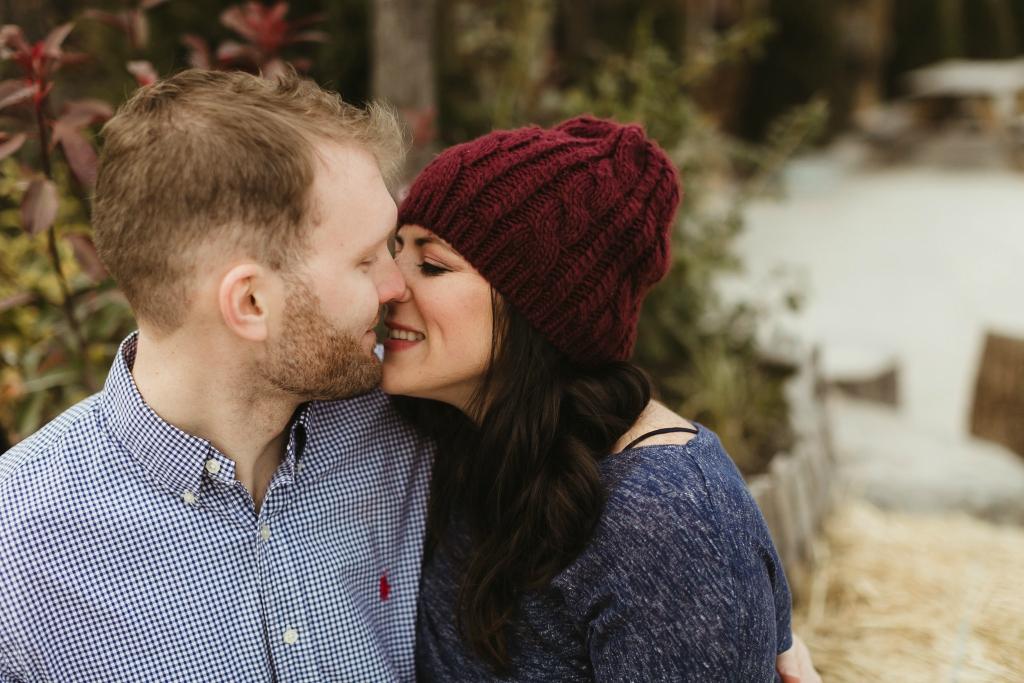 Engagement Session Inspiration:
“Dan loves the ice! It is his happy place. We love having the Riverrink right here in Philly. We go pretty often and he certainly shows off his skills. I thought it was different, the place is just super cute, and you have Big Ben as a backdrop, no-brainer!” 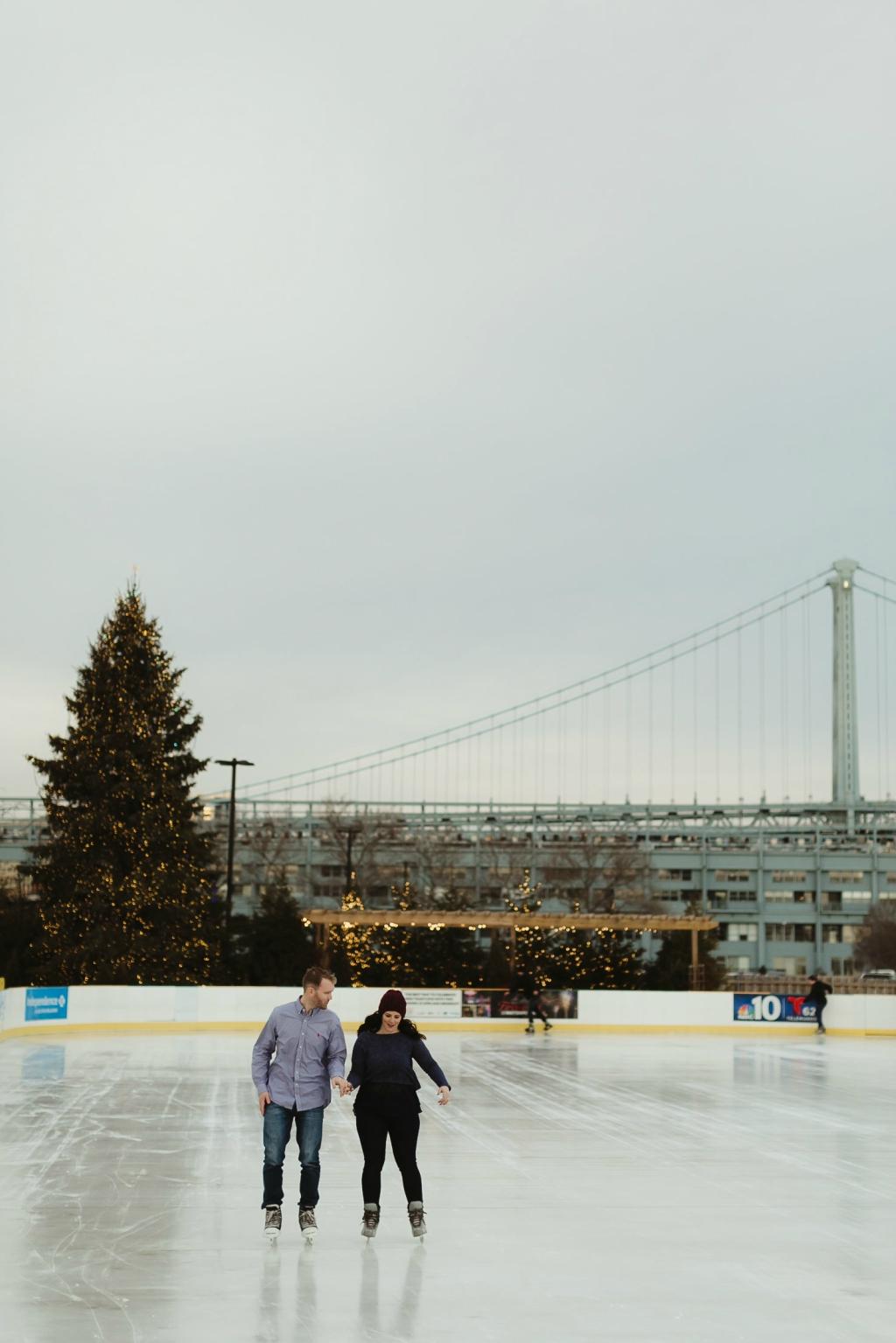 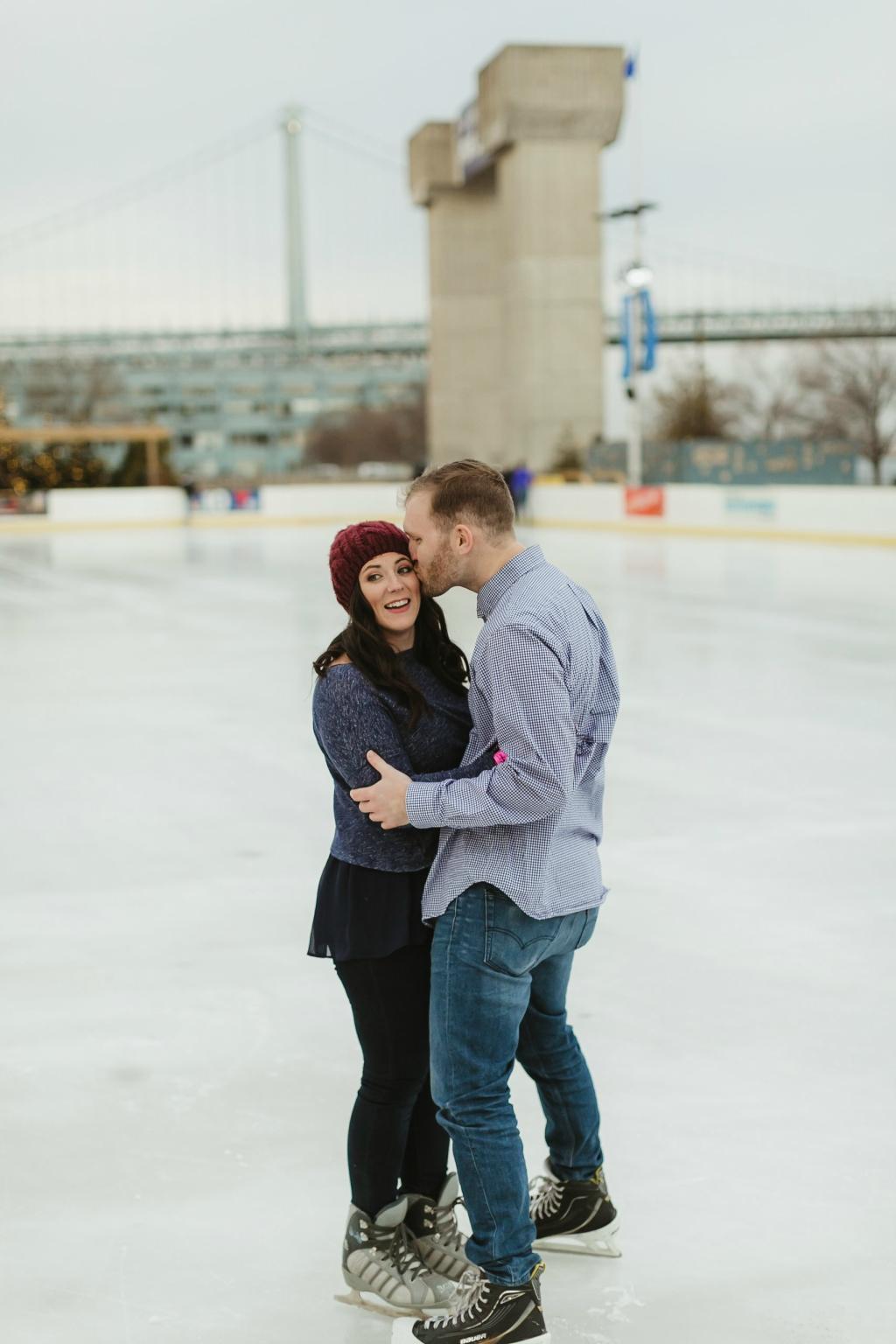 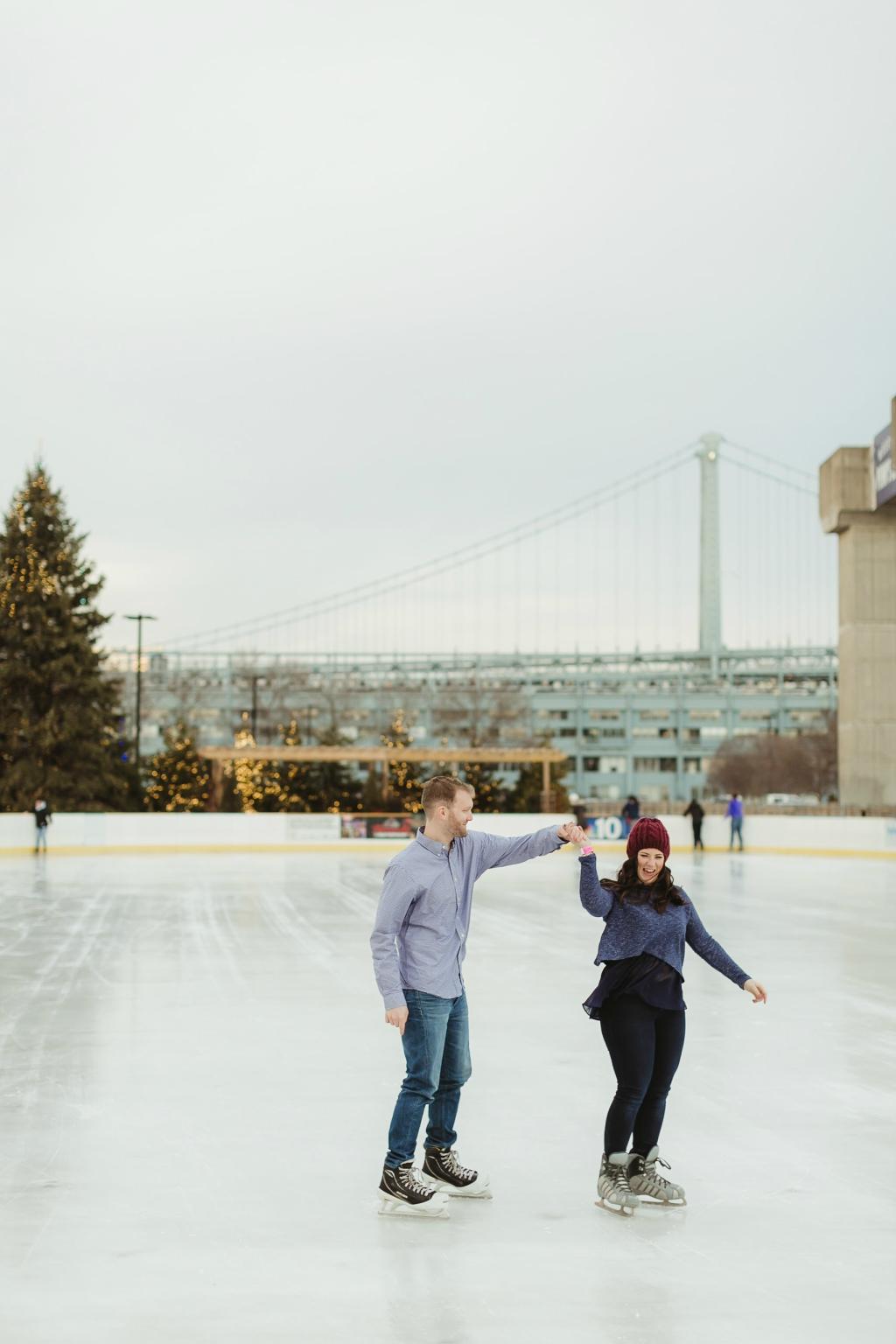 “We have started planning, we’ve gotten the big things out of the way, like the venue and most vendors. We decided to get married right in Center City at the Reading Terminal Market and we can’t be more excited, we’re telling all of our guests to come hungry! We are trying to keep the planning as stress-free as possible and that’s going pretty good so far.” 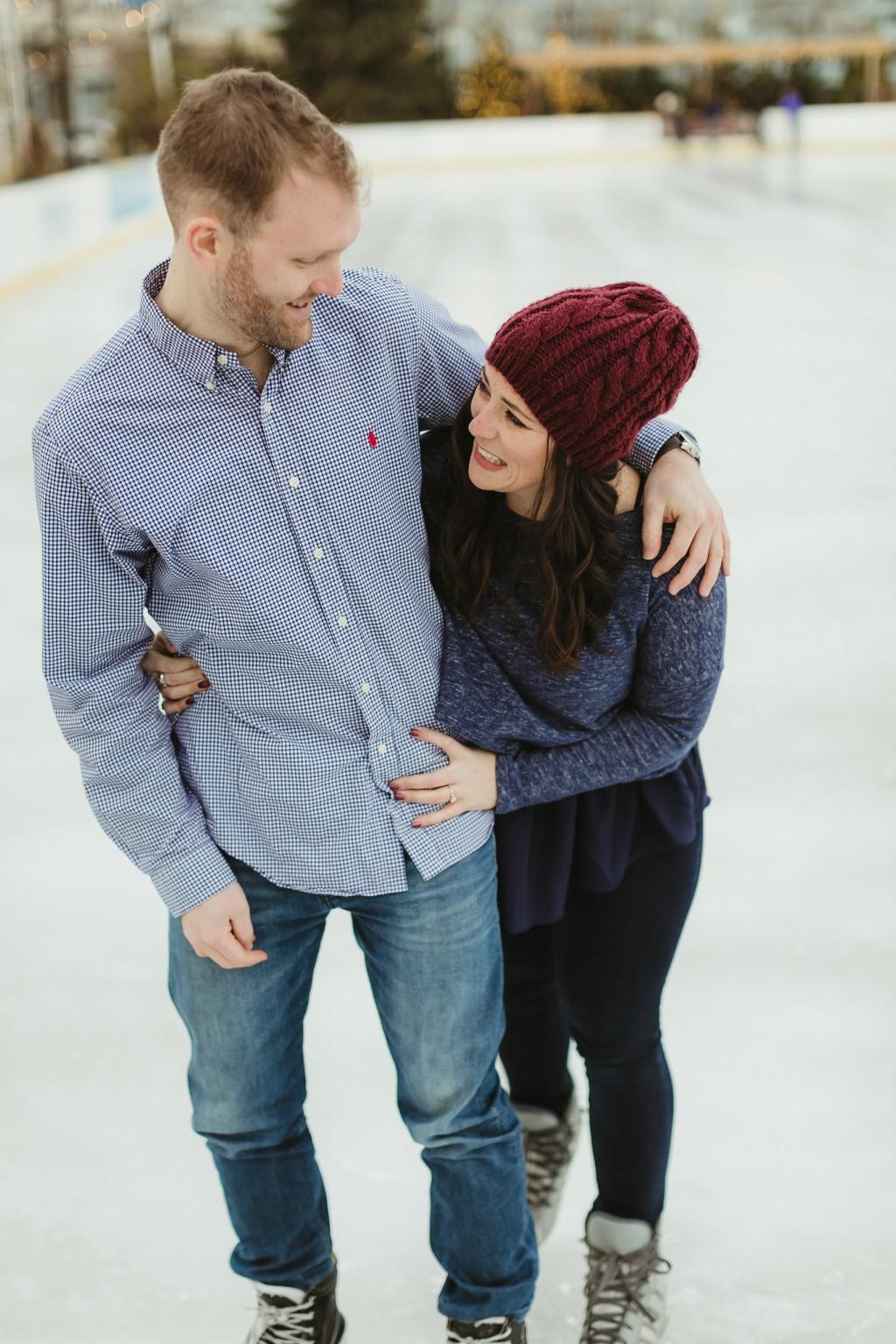 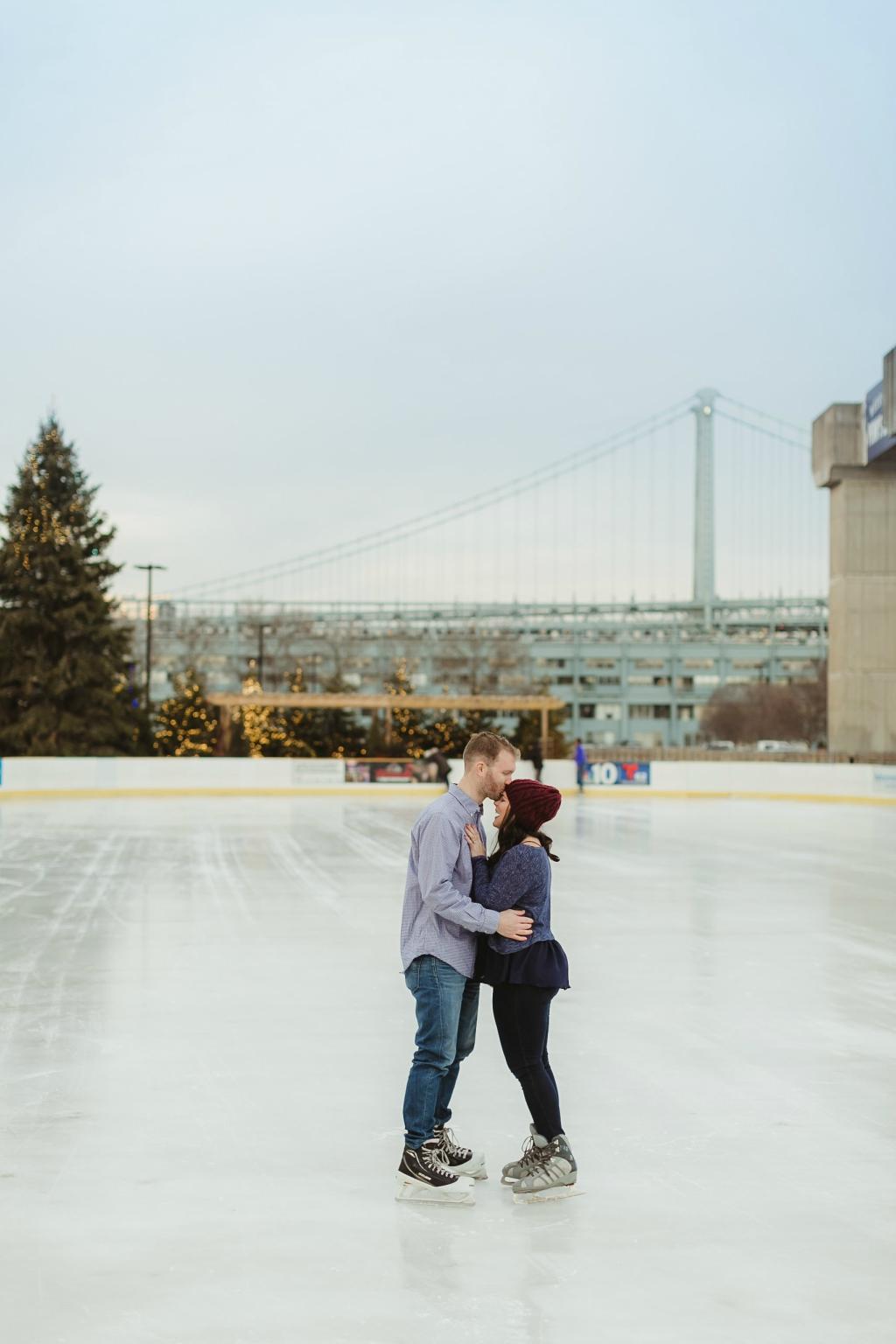 “Magi is the best. I went to high school with her and consider her a great friend of mine. She made the engagement session so fun and effortless. Neither Dan or I are big in front of the camera people but with her direction, it felt so natural. I could never say enough about how talented she is, just look at her work! Luckily, we worked it out that she will be a combo guest/photographer at our wedding. Thank you a million times Magi!”