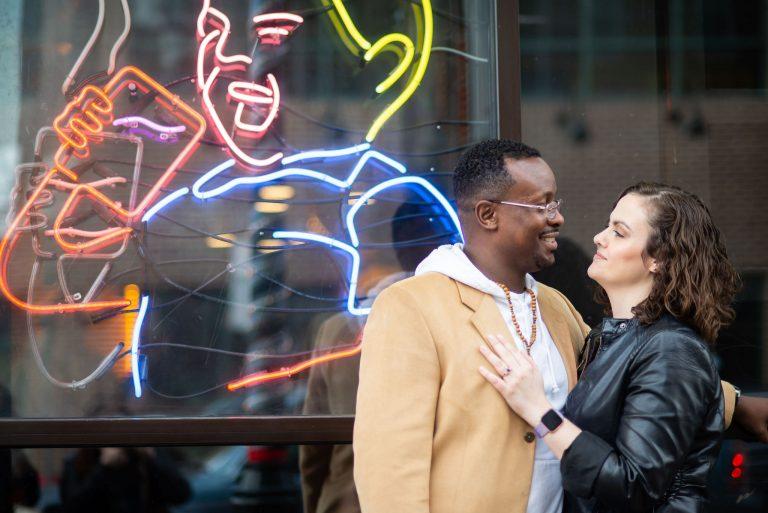 The world of online dating can be both exhilarating and nerve-wracking all at once! Dating can be challenging enough, however when two people like Maggie and Quan use humor to “break the ice” then that’s when the magic happens! Continue reading for a look at how this cool and unique couple fell in love.

“Quan and I met in 2016 online and went on our first date on South Street shortly after. I was pretty nervous to meet him in person at first, but he quickly made me feel comfortable by saying something funny when I walked up to meet him. He was waiting for me outside of Big Gay Ice Cream, and I had joked beforehand that I would be arriving in my best pajamas. Of course, I was actually wearing regular clothes, and as soon as I approached him, he said “oh, I see you, nice pajamas!” We laughed and I was immediately at ease. Then, we walked up to MilkBoy for a drink. The date went very well, but I was getting on a plane the next day for a weekend trip and had to cut it short so I could go pack. We met again after I got back from the trip and the rest is history.  I found out later that he thought I cut the date short because I didn’t like him, which couldn’t have been further from the truth.”

“Maggie and I met online first. We had a couple conversations before meeting “IRL” (in real life). In this digital age, I was preparing for the possibility of being catfished for our first meeting. We decided on “Big Gay Ice Cream” on South Street. She said she’d be in her pajamas since it was close to her bed time. I was stunned when she turned the corner. She is gorgeous and on top of that, has beautiful curly brunette locks. And of course, she wasn’t wearing her promised pajamas, but a bad ass leather jacket. She walked with confidence and grace. We didn’t get ice cream, but instead walked and talked trading compliments and pleasantries. We stopped for a drink before she whisked away to New Orleans. I figured she wasn’t really interested, but to my surprise, I got a second date!”

Maggie tells us, “This is an adorable story. Quan proposed in September 2019. I was studying for a huge exam I had that month, and he told me he wanted me to take a break and go out with him one night. He wouldn’t tell me anything about where we were going and so we got in the car and started driving. I noticed his hands were cold, and usually they are very warm, and he tried to explain it by saying he had been sitting under the air conditioning vent all day. He’s a terrible liar. We headed up Delaware Avenue and into the parking garage of a hibachi restaurant we go to frequently. He tried to make it seem like we were early for reservations so he suggested we use the extra time to go for a walk. He led me down to the Race Street Pier and kept checking his phone, which he doesn’t usually do. I thought something was a little off but wasn’t sure exactly what, nonetheless, I just went with it. We went out to the end of Race Street Pier and he tried to make small talk to kill some time.

Then he walked me over to the big steps that run all along the pier and stopped me one step above him, turned me around, and started proposing. It was so sweet! I was so in shock though that I’m not even totally sure what he said. I only remember snippets of it. He had the most gorgeous ring custom made for me by one of his friends who is a talented jeweler. After I said yes, I gave him a hug and then noticed one of his friends was there recording, then saw one of my friends recording, then a crowd behind me started cheering and it was a bunch of his friends and my friends, some of whom came from out of town. Apparently they had snuck part way onto the pier while he was making the small talk, and they were who he was texting as we were walking down Delaware Avenue. We all then went to celebrate for the real reservation he had made at the hibachi restaurant, and then had more fun at Dave and Buster’s downstairs. It was so much fun and really so thoughtful and sweet.”

Quan lovingly says, “Well, Maggie is a special kind of woman. A true “one of a kind.” So, first, I had to get her an engagement ring that’s one of a kind.  For that, I turned to a trusted friend and jeweler. In secret, we hatched a plan to create a ring that would capture “us.” Having done that, the actual proposal was easy enough.  At least, it was at first. Getting our closest friends together was a bit tricky, but I managed to get everyone in place at Race Street Pier. I had told Maggie that we were going to our favorite hibachi steakhouse as a stress break from her board exam studying. Once everyone was in place, we made our “exit” up the terraced steps and I grabbed her hand, spun her around and asked her for forever. To this day, she claims she knew all along, but we both know she was surprised and swooned a little bit on the inside.”

Maggie shares what she loves most about Quan: “I love and adore so many things about Quan. First, obviously, is his sense of humor, which he uses to make me laugh almost constantly. After getting to know him, I’ve fallen in love over and over again. He is so intelligent and ambitious, I love his drive and passion. He wants to help others all the time and has a huge heart. He is so thoughtful and remembers little details that always surprise me when he brings them up. He is always trying to be better and improve himself, and always thinks about us and our future. He has a passion for being a dad, and whenever I see him around kids I can’t help but be excited to see him with ours someday.”

There’s so many things Quan loves about Maggie and he says this, “I don’t know if there’s one thing that I love most. I see our future in her eyes. I see our family, our dreams, our passions, our struggles and our triumphs. I say she’s my team mate, which admittedly, is a little corny, but I feel like we can accomplish anything together. But there’s one thing that let me know she’s the one: we were having a conversation and she directly, without sugar-coating (and not even really knowing me that well yet) challenged me to be a better man. She saw that I had potential to be better and let me know about myself. Now, I was annoyed, but it was only because she was right. Anyone who has expectations for you that can exceed your own, cares about you more than you realize. From then on, I saw her differently and that spark started to blaze.”

Maggie says, “Our inspiration for the engagement shoot was that we wanted to re-create our first date and the proposal. So we started at Big Gay Ice Cream and made our way up South Street hitting up all of our favorite spots, including MilkBoy where we had our first date. The most fun part about the South Street portion of our photo shoot was actually getting pizza at Lorenzo’s and eating it on camera at our favorite spot to sit a block behind South Street. Then we went to the Race Street Pier and took photos there on the steps where he proposed. The photos are so beautiful and authentic, and just really captured the playful essence of our relationship.”

Quan says “Honestly, we just wanted to capture ourselves. We’re silly, passionate, fly and unique. We frequent South Street so having that as the location made sense. Also, we had to give love to Big Gay Ice Cream for being the unwitting meeting point for this future union. Philadelphia is a unique city that I think speaks to both of us for different reasons. But whatever those reasons are, we found each other here, so Philly will always have a place in our hearts.”

“Well, we did, but then coronavirus so…. everything is on hold for right now. We have definitely started planning, however, like most things, the global pandemic has interrupted us. We’re patiently and strategically trying to find alternatives but it’s certainly hard to find a solution that we feel speaks to us. Regardless, we’re getting married this year one way or the other. We’re excited about our future together and look forward to trying to explain 2020 to our grandkids… via zoom. Haha”

“We worked with Bokeh Lane Photography. It’s a couple who is also engaged and planning their own wedding; Nicole and Jose. They are simply wonderful! So energetic and creative! I wanted a photographer that has a great eye for candid shots and heard about these two from a friend who had their engagement and wedding shot by them. My friend’s pictures were beautiful, so I reached out to Nicole and Jose. They helped us with every step of the process, even with picking out outfits before the shoot. They’re kind and professional and just so easy to work with. I am not used to being in front of the camera, whereas Quan is a natural in front of the camera. I told them that up front and they made sure to make me feel comfortable while just letting Quan be himself, and the pictures came out so great!”

Quan added, “They’ve been great. It’s fun working with a couple that’s also in the throes of wedding planning and love. They’re able to pick up on our little quirks and bring that to life in their photography. It’s fun seeing my silly side and Maggie’s cool composure captured. I’m sure our future generations will see these pictures and wish for the kind of love we have now.”