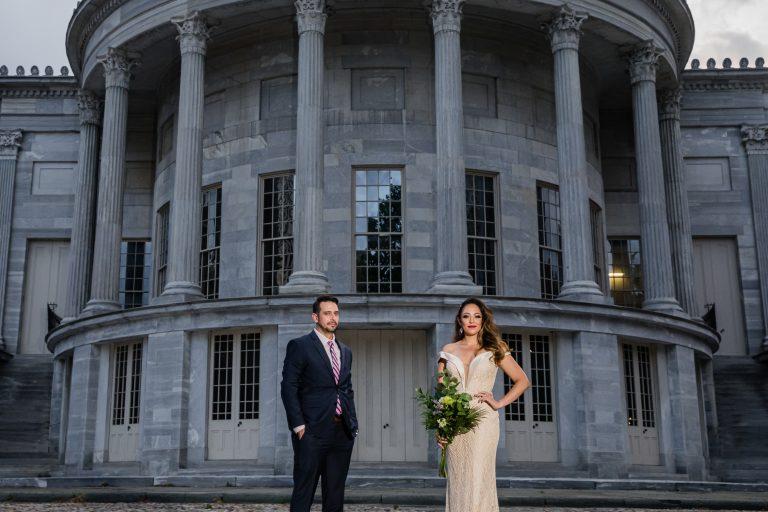 Jason and Veronica’s touching and bright micro wedding at Merchant’s Exchange is simply inspiration for anyone looking to pull off a wedding during COVID-19. Take a look at the amazing photography from Laura Caporizzo of the Philatographer:

“Jason and I both met at Temple University hospital on the same pulmonary service (hes already a pulmonary critical care fellow in Worcester, MA and was here for a month as a visiting fellow, and I am an internal medicine resident at PCOM who is applying for the same fellowship this year!).”

“It sounds insane, but we only met in February this year and while I definitely thought the sentiment of ‘we just knew’ was reserved for cinema, it’s completely true! We started menial conversation on rounds (Jason makes me massively anxious with how much he knows about all things medicine) and kept it pretty safe and clinical which lasted maybe all of one day. When Jason left to return for Massachusetts at the end of the week, we talked incessantly. We felt like we had known each together our whole lives and within a week and courtesy of now COVID-cancelled vacations abroad that were now cancelled for both of us (maybe it was serendipity), we were both left with a week of unoccupied time on our hands.”

“Jason drove 5 hours back down to Philadelphia after one of his shifts ended with plans to take me to dinner, right as the city had literally issued a stay at home order the evening he arrived. We talked for the entire night over takeout and ironically forced quarantine ensued and we decided to spend an entire week together in Massachusetts as we both had a week of paid time off left. Although we had been literal strangers 2 weeks earlier, we were inseparable almost instantaneously (probably the most disgustingly saccharine thing I’ll ever admit) and it didn’t take long before we decided that we were both two deliberate, sound-of-mind adults who didn’t want to spend our lives with anyone else!”

‘Both of us individually saw and rendered care for so many people who were critically ill in the ICU at work, and witnessed just how fragile and easily deconstructed everyday life and well being could be, that we felt if there was ever a time to do something truly out of just genuine love and not for the theater of marriage or wedding industry, now would be the time. We originally planned for a very modest elopement with just us and an officiant, but unfortunately we are both terrible secret keepers and we ended up having an unintentional micro wedding with our immediate family and a few close friends not in excess of 10 people. It was perfect!“