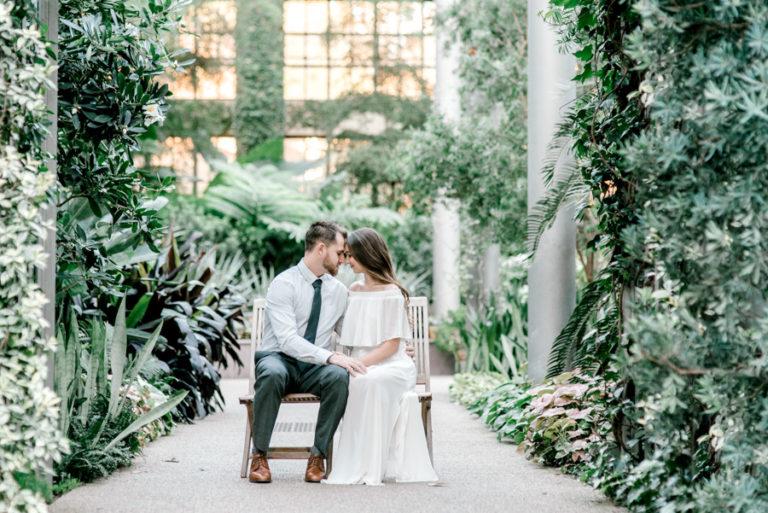 It was love at first sight when Kaitlyn and Matt met photographer Emily Spong of Clicke Photography at a local bridal show. The couple chose Longwood Gardens in Kennett Square, Pennsylvania for its lush greenery and knew it would prove a gorgeous backdrop for their engagement photos captured exquisitely in the light and airy style Emily is known for.

“Matt and I met in college when I transferred to West Chester University our junior year. My best friend and her roommates had an open spot in their apartment and offered for me to move in. The first night we arrived, Matt came over. Turns out my roommates were best friends with Matt and his friends. Little did I know we would be getting married seven years later. The day after we met, my friend and I were building our dressers for our room, and they invited Matt over and had him come help me upstairs and my friends were building the other one downstairs. I was so mad at them at the time, seeing as they totally did that on purpose and I barely knew Matt!”

“After that day, we just clicked and that has been it ever since. They then told me that the first night he met me he told my friend I could be his wife one day. Fast forward seven years, and here we are!”

“Matt and his family were going to Lake Norman in North Carolina for the Fourth of July. I was in nursing school at the time, and was unsure if I would be able to go, so he was planning on proposing a few months later. Turns out I was able to go last minute. When we got there, they told me we were going to dinner at a yacht club. So, I put on a dress and heels. I noticed his sisters were in jeans and t-shirts, so I felt over-dressed and wanted to change. However, they were all in on the plan and said we were in a hurry so we went outside to get ready to leave. The house we were staying at had this dock over the water, and Matt wanted to take a picture up there. I was hesitant because it was just raining before this and I was in a long dress and heels and did not feel like climbing up to this dock, but I did. His sisters came up with us and had us take a picture of them, and then were going to take a picture of us. After they did Matt said he had another pose he wanted to do, and before I knew it he was down on one knee. To say this was a surprise was an understatement, and it was even more surprising that my family, especially my sisters, didn’t ruin the surprise! It was the most perfect proposal.”

Philadelphia is America’s Garden Capital and Longwood Gardens is one of the top destinations for wedding couples for its natural beauty and romantic setting. And since the happy couple first got engaged on a lake in North Carolina last summer, the surrounding fountains and botanical gardens echoed their love of the outdoors splendidly. There’s also so many florals and other organic elements here, that this setting is a photographer’s dream.

“Wedding planning has actually been pretty fun. It’s been so much fun going around to different appointments with vendors and picking things out that we both love so our wedding really shows who we are. We got engaged two years ago so we have been doing things a little at a time so it’s not too stressful! Our families have both been so helpful as well, so we really lucked out!”

Kaitlyn and Matt loved their experience working with Emily at Clicke Photography!

Here is some other inspiration for your further enjoyment: